They are both known for their fondness of the limelight. But Boris Johnson seemed less keen to be noticed when he was spotted in a restaurant with Nigel Farage.

The Tory MP and the former Ukip leader were seen in conversation at the Boisdale in Belgravia.

A fellow diner posted photographs of the pair on Facebook with the caption: ‘I saw a curious couple in a Belgravia restaurant last night.  Boris Johnson was not enthusiastic about being photographed with Nigel Farage.’ 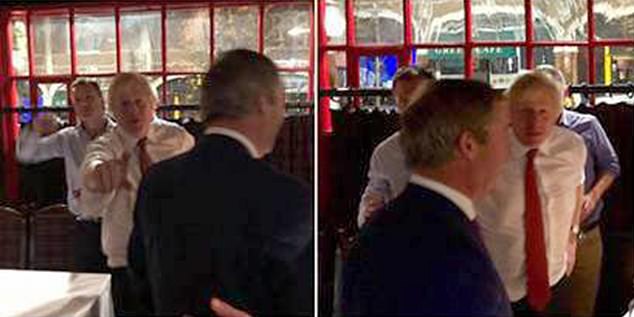 One of the accompanying pictures showed Mr Johnson waving his finger disapprovingly as if he was unhappy to be photographed.

A friend of Mr Johnson yesterday said that he had been having dinner with his father, Stanley, when Mr Farage happened to arrive at the same restaurant.

The Boisdale describes itself as a ‘lively Scottish restaurant in Belgravia, London with cigar terrace, whisky bars, private dining rooms and live jazz every night- serving modern British dishes and the finest whiskies’.

A 10oz Buccleuch fillet on-the-bone, which it claims is ‘probably the best steak in the world’, costs £45.

A source told the Mirror Online that it was a chance encounter and the two chatted for about five minutes.

‘Boris was dining with his father Stanley when Nigel happened to come into the same restaurant,’ he said. ‘He knows Stanley from LBC [radio] so popped over to say hello. Both parties then went about their separate evenings.’ 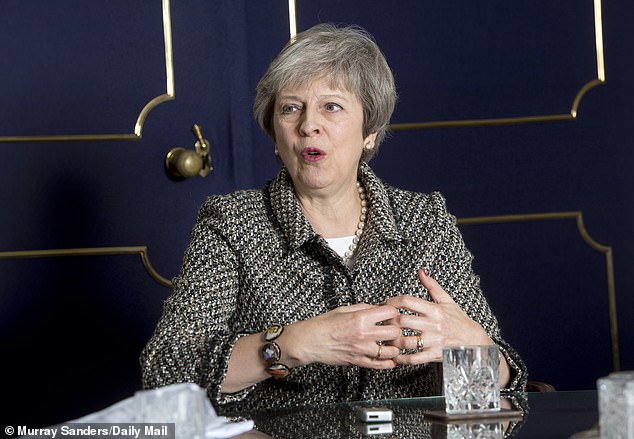 The sighting came as Theresa May has warned her Tory opponents their alternate Brexit plans would not make their problems disappear as she faced a continuing gruelling battle to win over sceptical MPs.

After bolstering her Cabinet by bringing back former home secretary Amber Rudd, Mrs May warned that the so-called Norway and Canada models favoured by her most hardline critics would not solve the issue of the Irish border backstop.

It came after a tumultuous week that saw the departure of ministers including Brexit secretary Dominic Raab and work and pensions secretary Esther McVey, and the launch of a high-profile insurrection on the back benches to remove her from office.

Ms Rudd pleaded with Tory rebels to back the Prime Minister and her Brexit deal on her return to Government as the new Work and Pensions Secretary, saying: ‘This is not a time for changing our leader.’

But the Prime Minister’s critics believe they have the numbers required to trigger a confidence vote within days.

And Brexit-supporting ministers led by Andrea Leadsom are reportedly set to work together on measures to make the deal more acceptable to them.

But in an interview with the Daily Mail, Mrs May bluntly told them their alternatives would not work.

She said: ‘People say ‘If you could only just do something slightly different, have a Norway model or a Canada model, this backstop issue would go away’. It would not. That issue is still going to be there.

‘Some politicians get so embroiled in the intricacies of their argument they forget it is not about this theory or that theory, or does it make me look good.’

Mrs May appointed Stephen Barclay as her new Brexit Secretary, the third this year, but the role has been further downgraded as the Prime Minister will in future take sole control of negotiations on EU withdrawal.

Leave-supporting Mr Barclay’s job will be limited to the domestic delivery of EU withdrawal, preparations for Brexit either with or without a deal and shepherding legislation through Parliament.

He said: ‘We now need to keep up the momentum to finalise the withdrawal agreement and outline political declaration and deliver a Brexit that works for the whole UK.’

The reshuffle came just hours after Michael Gove offered the Prime Minister a lifeline by staying on in his Cabinet role.

Mr Barclay’s appointment came after Mr Gove reportedly turned down the post, saying he would only take it if he could renegotiate the EU withdrawal agreement.

Downing Street declined to say whether the Brexit Secretary post had been offered to anyone else before the North-East Cambridgeshire MP, saying only: ‘He was the Prime Minister’s choice for the job.’

Ireland’s deputy premier has warned British politicians to sign up to the current Brexit agreement or risk crashing out of the EU without a deal.

Simon Coveney said people were ‘too quick’ to write off Mrs May, saying she has shown ‘resilience, courage’ and a ‘reality check’ to Brexiteers in Westminster.

Speaking ahead of Fine Gael’s Ard Fheis (conference), he warned it ‘will be difficult’ to find an alternative deal that will prevent a hard border.

‘If we are forced into that situation we will have to look at ways in which that can be avoided but that will not be easy,’ he said.

‘It is a far more sensible approach to support what is being negotiated over the last two years as a way that we know provides the guarantees that we have looked for and insisted on that there will be no physical border or infrastructure or checks or controls and that is an issue that goes beyond commerce and trade.’

David Davis, who was Brexit secretary before Mr Raab, had earlier used a series of tweets to again urge Mrs May to seek a looser deal with the EU.

He said the United States would be ready to start negotiating a free trade deal with Britain ‘immediately’ after Brexit if Theresa May’s plan is ditched, while making a trip across the Atlantic.

The former Brexit secretary revealed he had spent several days in Washington talking to ‘US Government Trade and Treasury officials’ while Westminster had been reeling from high-profile resignations and questions over the Prime Minister’s future.

‘They have already started on the procedures to allow negotiations to start immediately once we leave the EU in March,’ he said.

‘This will not be possible if we accept the Government’s proposed deal with Europe, which will block every avenue of negotiation with America.

‘We have to have a Canada+++ deal to allow us to have a free trade deal with America.’

The top aesthetic trends of 2020 - including Kate Middleton's 'happy face'
Yellow Vest violence boils over in Brussels as Europe braces itself for rise of far-right
India has LOST CONTACT with its Chandrayaan-2 moon lander
Hunt for Palace mole who revealed news of rift between Kate and Meghan
Marines who paid the ultimate price on Iwo Jima are captured in fascinating historical footage
Ian Huntley 'has transsexual lover in jail'
Peter Mayhew, who portrayed Chewbacca in original Star Wars trilogy, passes away at age 74
Celebrities react in fury to Kanye's meeting with the president