The installation of new gas boilers to provide heating and hot water is set to banned for new homes from 2025 in a move that could add £5,000 to the average price, Chancellor Philip Hammond revealed today.

The Government’s advisory Committee on Climate Change recommended ending the connection of new homes to the gas grid by 2025 in a report last month, with super-efficient properties heated with low-carbon energy instead.

The move is one of a series of environmental measures unveiled in a short Spring Statement, as he sought to address one of the major concerns of young people ahead of a second school climate strike on Friday. 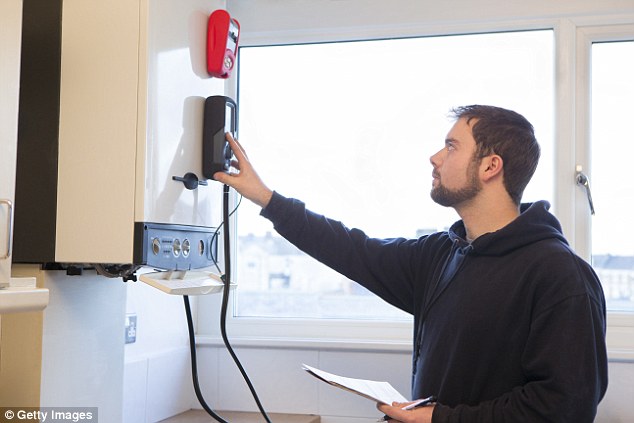 New homes will no longer be heated by gas from 2025, as part of efforts to tackle climate change, Chancellor Philip Hammond revealed today (file image)

He also announced the protection of all the waters around Ascension Island in the Atlantic, where no fishing would be allowed.

The proposals also include increasing the amount of so-called ‘green gas’ in the National Grid to replace Natural Gas from the North Sea.

Green gas – or biomethane – is created from biodegradable material, such as food and farm waste, and is purified and pumped into the pipes for cooking and heating.

– All future homes will be future proofed with low carbon heating. The most likely replacement for gas are air source heat pumps.

– There will also be measures to help small businesses cut emissions.

– There will be a study into carbon offsets for air travellers, such as tree planting schemes.

There will also be measures to help small businesses to cut emissions and a study into carbon offsets for air travellers, such as tree planting schemes, as part of efforts to move to a carbon-neutral economy.

Mr Hammond seems to have watered down this proposal to some extent by limiting the ban to gas central heating, so averting a backlash from home cooks who prefer gas.

He said: ‘To help ensure consumer energy bills are low and homes are better for the environment, the government will introduce a Future Homes Standard by 2025, so that new build homes are future-proofed with low carbon heating and world-leading levels of energy efficiency.’

The most likely replacement for gas are air source heat pumps.

These extract heat from the outside air, even in the depths of winter, and channel it into a compressor that amplifies the heat which is then used to warm up water for the heating, taps and showers.

The pumps are generally combined with extra insulation, however the total cost of including these two elements in a new property is currently estimated to be around £5,000 more expensive than a gas boiler.

Mr Hammond also outlined a call for evidence on whether travel providers should be required to offer ‘genuine carbon offsets’ for their customers to reduce the pollution from their journeys, and proposals to boost green gas in the grid.

Along with measures on climate change, Mr Hammond also announced that the Government would mandate ‘biodiversity net gain’ for developments in England – to ensure new housing and infrastructure does not hit wildlife.

And a comprehensive global review of the link between biodiversity and economic growth, to be led by Professor Sir Partha Dasgupta, emeritus professor of economics at Cambridge, will be launched as part of efforts to stem declines in wildlife.

‘All our homes and buildings must be made efficient, affordable and zero-carbon within the next two decades to address the climate crisis.

‘Ending the scandal of poor quality new homes is a no-brainer that’s good for everyone.’ 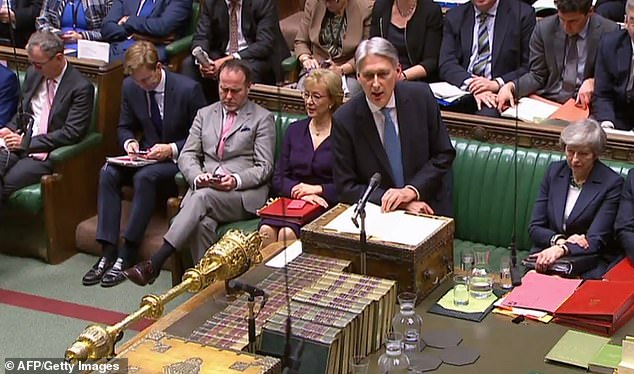 Mel Evans, senior campaigner at Greenpeace UK said the plan to end fossil fuels in new homes ‘is vital’ and welcomed the measures to protect wildlife.

But she warned that tackling the climate ’emergency’ required much bigger thinking.

‘Issues like the shoddy state of our existing housing stock and rapid adoption of electric vehicles require serious money behind serious policies,’ such as banning new petrol and diesel cars and vans by 2030, she urged.

Dave Timms, from Friends of the Earth, said: ‘The nation’s children are calling out for tough action to cut emissions; Mr Hammond must listen harder to the lesson they’re teaching him.

And he said: ‘The Chancellor should have announced a massive programme of investment in home insulation and public transport, instead of pushing the false solution of carbon off-setting for aviation.’

The House Builders Federation warned that, while it supports a shift to green energy, it is important that alternative heating options are available at a reasonable price before gas boilers are abandoned.

A spokesman said: ‘Developers have demonstrated a clear commitment to this agenda and new homes are already considerably more energy efficient than older ones. New technologies are increasingly being incorporated that drive down emissions and we are committed to continuing to work with Government on this.

‘The ongoing costs and comfort of homeowners is an absolute priority for home builders and it must be ensured that alternative heat sources are suitably attractive, available and efficient before withdrawing existing options.’ Director of the campaign group 10:10 Climate Action, Max Wakefield, backed the move to end fossil fuel heating in new homes.

‘All our homes and buildings must be made efficient, affordable and zero-carbon within the next two decades to address the climate crisis. Ending the scandal of poor quality new homes is a no-brainer that’s good for everyone,’ he said.