A lorry driver has been arrested after a crash on the M58 killed a 14-year-old pupil and a member of staff from a special needs school.

A man in his 60s, two teenage boys and a woman were rushed to hospital after the horror smash between Junctions 3 and 4 of the motorway near Wigan at 8.45am on Tuesday 8 December.

Police later confirmed the woman and one of the teenage boys died as a result of their injuries and a 31-year-old man driving a lorry has been arrested on suspicion of causing death by dangerous driving. The man in his 60s is said to be ‘fighting for his life’ after the accident.

Tributes have now been paid to the teenage boy and the female staff member by the headteacher of Pontville School, in Ormskirk, West Lancashire. The school is a special education needs facility which caters for children with specific therapeutic, care and behaviour needs. 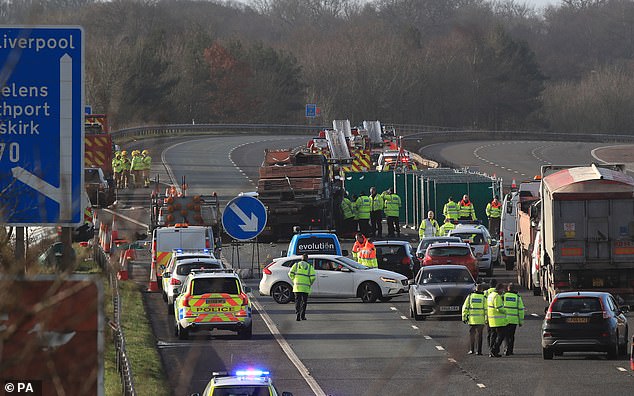 In an email to parents seen by the Liverpool Echo , headteacher Mrs Justine Sims said she was ‘deeply shocked’ to have learnt of the accident involving a minibus which had been carrying a number of pupils and staff.

‘It is with the deepest sadness that we can confirm that one young person and one member of staff on board the minibus have died and the remaining four have been taken to hospital.

‘Our thoughts and sympathies are with all our families at this very sad time. 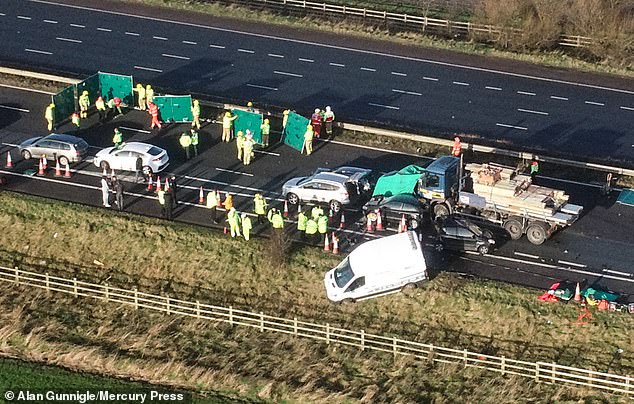 An aerial image shows the lorry carrying scaffolding with another car smashed in front of it covered by a green sheet, the white van on the side of the road and other vehicles, as emergency service vehicles swarmed the scene

‘Our overriding priority is to provide help and support to classmates, colleagues and families of those involved in the accident as best we can.

‘We will be in school tomorrow with additional therapeutic staff to support your son or daughter.’

The crash happened when a lorry and a minibus collided with a number of other vehicles. A second collision occurred when another lorry hit a white van and a car. 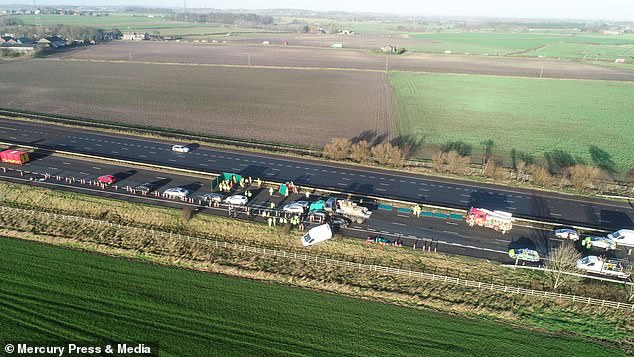 Crash scene: The M58 was closed in both directions on Tuesday after the two crashes happened between Junctions 3 and 4

Pictures from the scene show a lorry carrying scaffolding, a white van crashed in a field on the side of the road and a number of other smashed up vehicles.

The road has now-reopened in both directions – after several hours closed while police and paramedics investigated the scene.

In a statement, Lancashire Police said: ‘The collision, which happened between junctions 3 and 4 Westbound, involved an HGV, a minibus and a number of other vehicles. 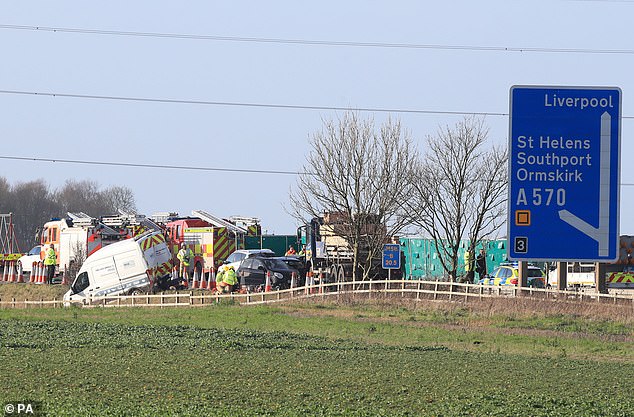 The horror smash happened between junctions three and four of the M58 at 8.45am Tuesday morning

‘Very sadly as a result of the collision two people, a woman and a 14-year old boy, suffered injuries which proved fatal. No further details can be released at this time as we are contacting next of kin.

‘A number of other people also suffered serious injuries and are being treated at hospital.

‘The driver of the HGV, a 31-year old man from Chorley, has been arrested on suspicion of causing death by dangerous driving. He is currently in custody. 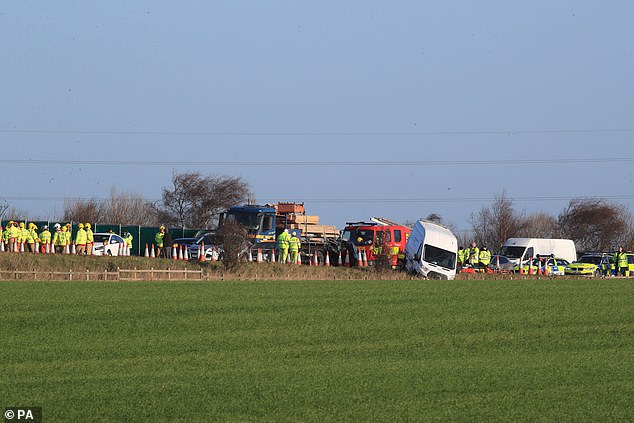 ‘Shortly after the initial collision a second collision took place involving an HGV, a van and a car.

‘As a result of this collision a woman also suffered serious injuries. Two men were also seriously injured.’

A North West Ambulance Service spokesman said earlier: ‘One is in his early 60s and has major trauma injuries, the other two are in their mid-teens.’

They did not confirm if they were all travelling together.

A spokesman for Allied Scaffolding, the company who own the timber lorry, said: ‘We are fully aware of the situation and it is related to our company.

‘We are in full co-operation with the police and authorities and will give them our full support.

‘Our main concern at this stage is for those involved in the crash.’ 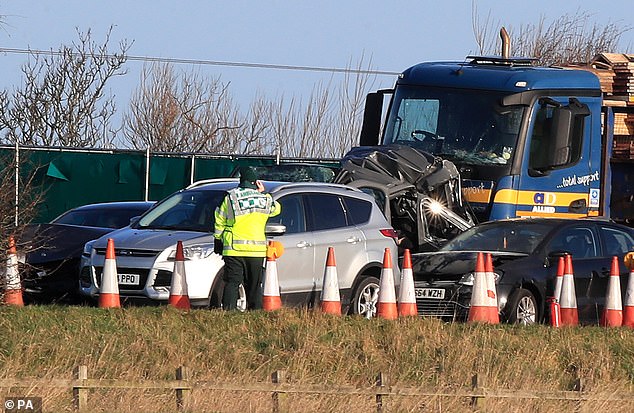 A witness said of the crash: ‘It looked very serious. I’ve never seen anything like it in my life.’

Helen Green Purnell, 48, a pharmacy assistant from Skelmersdale, saw the aftermath of the crash while out walking dogs.

She said: ‘All I can tell you is I saw the cars slowing down and as I got there and there was a white van that had fallen down in to the ditch.

‘It looked very serious. I’ve never seen anything like it in my life.

‘The air ambulances were flying around. I’ve never witnessed anything like this before.’ 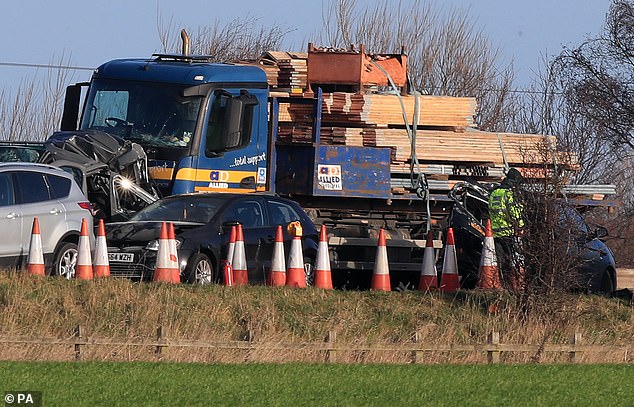 Two air ambulances, four land ambulances, police and fire engines were all in attendance following the crash between junctions 3 and 4 of the M58 near Wigan just after 8.45am today 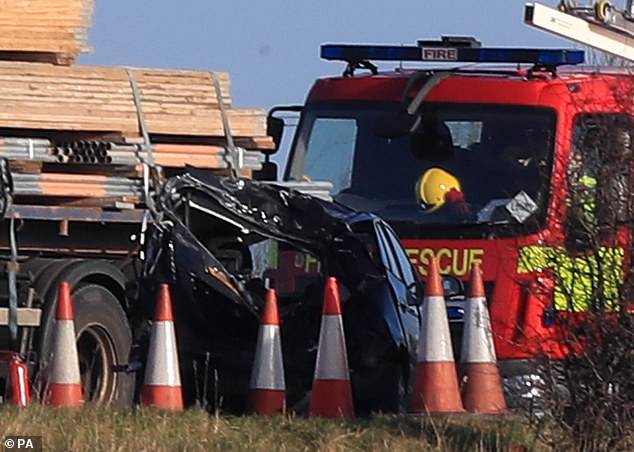