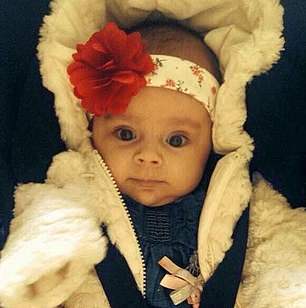 A 14-week-old baby girl died from a brain injury caused by ‘violent shaking’,  a coroner has ruled.

Cárágh Walsh, from Glasveigh Park in Poleglass, Belfast, suffered leg fractures while being shaken and a dislocated right elbow.

The 14-week-old baby girl died at the Royal Victoria Hospital two days after emergency services were called to her home at Glasveigh Drive in west Belfast on February 2014.

Her father Christopher O’Neill was initially charged with his daughter’s murder, but he was cleared by a jury in 2017.

Following an inquest into Caragh’s death last week coroner Joe McCrisken ruled the cause of death to be hypoxic ischaemic necrosis due to cardio-respiratory arrest, cerebral oedema and spinal haemorrhage due to violent shaking.

Caragh’s mother Tammie-Louise Walsh and a number of other family members wept as the findings were read out.

Mr O’Neill who also attended the hearing described the inquest as ‘sensitive and distressing’ and warned those present at Belfast Coroner’s Court that he intended to read his lengthy findings to silence.

He added that anyone who interrupted risked being held in contempt of court and taken to the cells.

Ms Walsh (left) was away from the home when the child’s father, Mr O’Neill (right), rang the emergency services from their west Belfast home

Mr McCrisken told the inquest: ‘The events of 5 February 2014 have irrevocably changed the lives of the Walsh and O’Neill families for the rest of their lives.

‘A tiny baby closed her eyes forever and that tragedy shall weigh heavily on both Mr O’Neill and Ms Walsh for the rest of their lives. Neither will fully recover from Caragh’s death.’

Summarising the evidence Mr McCrisken said Caragh had woken and fed as normal before being left in the sole care of her father.

‘He (Mr O’Neill) told the jury at his trial that Caragh was asleep in her bouncer while he was watching a DVD,’ Mr McCrisken said.

‘He said that she woke up crying. He described a painful cry. He lifted her and rocked her gently in his arms. 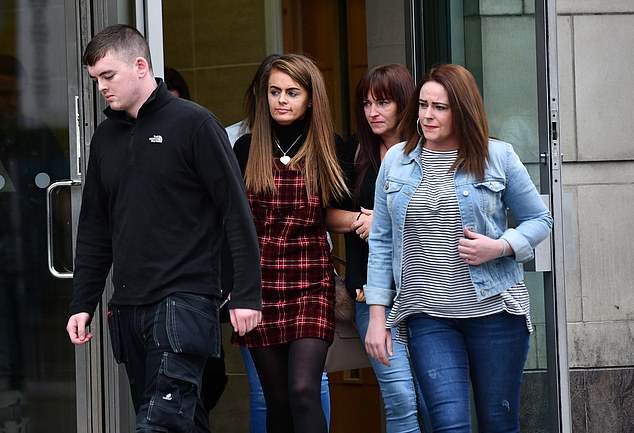 ‘At some point during this he said he noticed that Caragh was having difficulty breathing. He gave police a detailed account of how he shook Caragh in an attempt to rouse her. He described the force used as a five on a scale of one to 10.’

Mr McCrisken dismissed a suggestion made during Mr O’Neill’s trial by a medical witness that Caragh had suffered from rickets and accepted medical evidence that Caragh’s bones had been healthy.

He also said he was satisfied that Caragh had suffered injuries to her rib, leg and elbow approximately seven to 10 days before her death.

He noted in particular that the injury to her elbow ‘was extremely serious and must have required an exceptional degree of force’.

Mr McCrisken found that Caragh had suffered a cardio-respiratory arrest on February 5 ‘due to being shaken violently and with extreme force’.

‘There was no other reason for the cardio-respiratory arrest. I am satisfied that Caragh was shaken at least once, but probably on more than one occasion,’ he said.

‘The injuries to Caragh’s brain and eyes required a rapid and substantial acceleration and deceleration of her head and neck.

‘I am satisfied that violent shaking caused bilateral bleeds to Caragh’s brain as well as severe retinal bleeding and bleeding around the optic nerve.

‘The subsequent lack of oxygen and blood flow cause cerebral oedema and irreversible brain damage.’

Mr McCrisken paid tribute to the medical staff who tried to save Caragh as having delivered ‘exemplary care’.

‘Over the past four years they have been questioned about their actions and behaviour, subjected to cross-examination about their observations and treatment and criticised about their motivation,’ he said.

‘In my opinion, no criticism of the medical team at the Roya Victoria Hospital or those paramedics who treated Caragh is justified.’

Speaking outside court, Stephen Tumelty, counsel for Ms Walsh, told the Press Association she and her family were happy with the findings.

‘They feel that justice has been served at last,’ he said.