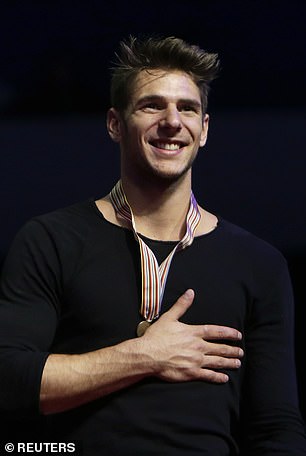 French Olympic figure skater Morgan Cipres (pictured) is being investigated by the U.S. Center for SafeSport for the alleged abuse of a 13-year-old female amateur

A French Olympic figure skater is being accused sending pictures of his penis to a 13-year-old female American Figure skater, who was then allegedly harassed by three coaches as they attempted to cover up the incident, reportedly telling the young girl that ‘men have their needs.’

The U.S. Center for SafeSport has announced that it is looking into the claims made by the girl’s parents against French pairs figure skater Morgan Cipres.

According to emails from the girl’s family that were obtained by USA Today, Cipres sent two pictures of his penis to the alleged victim, who practiced at a rink in Wesley Chapel, Florida, where he was training in 2017 in preparation for the 2018 Winter Olympics.

Figure skating coach Vinny Dispenza allegedly told the victim and another underage girl to request the pictures from Cipres in exchange for the promise of a pizza.

Coaches John Zimmerman and Silvia Fontana, a married couple, allegedly intervened in an attempt to prevent the girl’s family from coming forward.

The three coaches allegedly engaged in a cover-up in 2018 as Cipres continued preparing for the 2018 games, where he and his partner Vanessa James finished fifth.

The girl claims she was harassed for weeks by Zimmerman and Fontana, who told her that she was a ‘pretty girl,’ adding that ‘men have their needs.’

Dispenza is accused of threatening the girl, who claimed, ‘If I said something, he said I would never skate again,’ according to USA Today.

USA Today obtained an email from the alleged victim’s tutor to a psychologist who worked with the girl.

‘Please ask her to share with you the many statements that have been made to her over the past few weeks (mostly by John) in an attempt to manipulate or scare her into keeping quiet,’ the tutor wrote. ‘She has been told that telling will place a target on her back with French fans, that she is the type of girl who does this (collect pics), that she has been asking for it by her clothing choices, that her dad is an attorney and imagine what he will do if he finds out, that she will destroy his career and that of his partner, and much more.’

The psychiatrist, Dara Bushman, told USA Today that she followed the correct procedure: ‘I did what I was bound to do ethically. I contacted the parents. I contacted the authorities. I wanted to make sure the child was safe.’

U.S. Center for SafeSport does not comment on specific matters of its investigations.

When contacted by USA Today, Cipres told the paper, ‘I’m sorry, I cannot talk to you.’

US military takes custody of British ISIS terrorists known as 'The Beatles'
Swansea Council pulls Roy Chubby Brown gig because comic 'doesn't reflect' its values
Border guards catch 55 migrants in a week 'as they rush to get into the UK before Brexit deadline'
ROBERT HARDMAN: Log on all ye faithful... Justin Welby has made an online call for unity
Ben Affleck spotted on the set of addiction drama Torrance...after ex-wife's new romance is revealed
Hospital waiting lists DOUBLE in three months as top doctors refuse overtime over NHS pension reform
Britons mock dramatic Government coronavirus advice that could see MILLIONS told to stay at home
Boy, 17, decapitated and dismembered in Irish gangland murder