AS 2018 draws to a close, it is time to look back at all the footballing greats we lost this year.

It has been a tragic year with the horrific accident at Leicester, the deaths of 1966 World Cup winners and many more who are no longer with us. 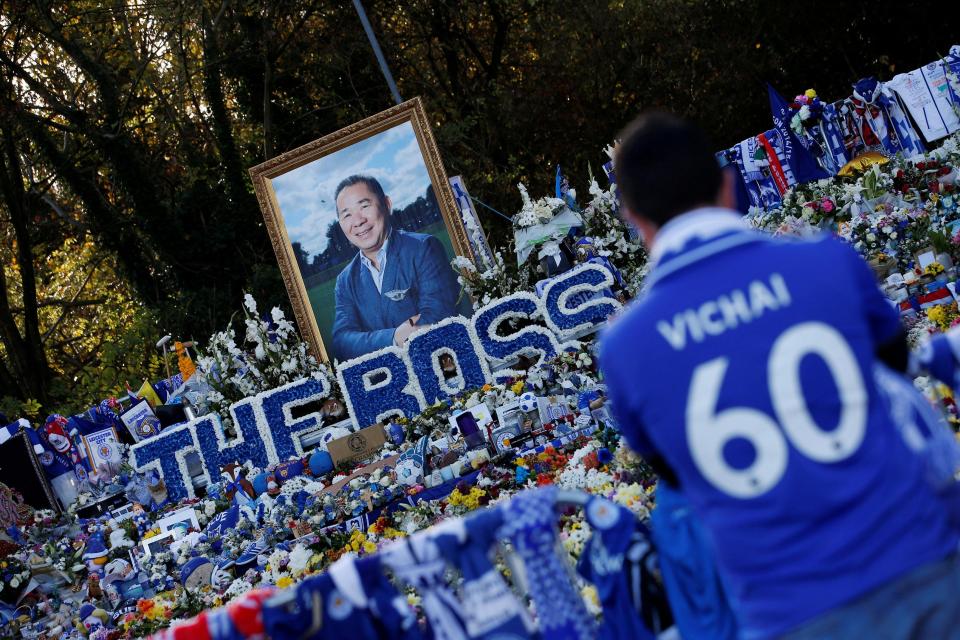 Leciester chairman Vichai Srivaddhanaprabha was one of five victims of the helicopter crash at Leicester City’s ground on October 27.

The incident saw thousands of fans from across the country visit the ground to pay tributes including Prince William and Kate Middleton and the Leicester players travel to Thailand for the funeral.

The football world mourned the death of Cyrille Regis in January.

The 59-year-old, who was only the third black player to play for England, died of a suspected heart attack on January 15.

Regis made nearly 300 appearances for West Brom during his career and the Hawthorns held a memorial to celebrate his life which was attended by hundreds including the current Baggies’ players, wife Julia and former footballers John Barnes and Dwight Yorke.

Ray Wilkins passed away at the age of 61, after suffering a heart attack.

The former Chelsea midfielder had been placed in an induced coma following the heart attack but it was announced a week later that he had died.

Wilkins made 84 appearances for England, with his debut coming under Don Revie and alongside the Blues played for Manchester United, Rangers and Celtic.

Following retirement Wilkins got into coaching and was assistant coach at Chelsea when they lifted the Premier League trophy at the end of the 2009/2010 season.

Blackpool announced that the former Tangerines and England legend Jimmy Armfield had died in January.

Armfield, 82, played 627 games for Blackpool and had been awarded 43 England caps during his career but had been battling cancer.

A memorial was held at Blackpool’s stadium a few days after the announcement, despite the Seasiders’ game with Charlton being postponed due to a waterlogged pitch.

Hundreds of fans turned out to applaud the funeral cortege as Armfield passed through Bloomfield Road one more time before the church service.

Former 1966 World Cup winner Ray Wilson passed away at the age of 83 in June.

The left-back played for Huddersfield and Everton during the 1950s and 60s but was diagnosed with Alzheimer’s disease in 2004.

On March 11, the footballing world was in shock following the death of Fiorentina captain Davide Astori.

The 31-year-old was found dead in his hotel room, in Udine by team-mates before the club’s game against Udinese.

The game was cancelled and during their first game back, Fiorentina stopped their match against Benevento on 13 minutes – his squad number – to honour their captain.

Garcia was diagnosed with the illness in 2015, whilst on loan in Tenerife from the Latics.

In 2014, he represented Honduras at the World Cup and made over 30 appearances for his national side.

Heartbreaking news for us to learn of this morning. Our former player Juan Carlos Garcia has passed away aged 29. Our thoughts are with Juan Carlos’ family and friends at this terribly sad time. We will hold a minute’s silence in Juan Carlos’ honour ahead of Saturday’s match with Peterborough United. #wafc

Former Premier League referee Paul Alcock lost his battle with cancer at the age of 64.

Alcock became well known for taking a tumble after being pushed by Paolo Di Canio when he showed him a red card in 1998.

In February, Liam Miller sadly died at the age of 36 following a battle with pancreatic cancer.

He was best known for spells with Celtic, Manchester United, Sunderland and QPR.

In September Celtic and Manchester United faced each other in a tribute match for their former player which saw players including Rio Ferdinand, Ryan Giggs and Damien Duff amongst the names competing.

Liverpool legend John Molyneux passed away in March at the age of 87.

The full-back made over 240 appearances for the Reds in the 1950s and 60s, playing under Bill Shankly and helping them gain promotion back to the First Division.

The 64-year-old spent his whole career in South America and was part of the World Cup winning Argentina squad in 1978.

Chelsea legend Roy Bentley died at the age of 93 in April.

He captained the side to it’s first-ever title win in 1955 and was their top scorer seven years in a row.

As well as spells with QPR and Newcastle, he later became a manager spending time in charge of Reading and Swansea.

In May, ex-Aston Villa and Bolton defender Jlloyd Samuel was killed in a car crash.

It is understood that the former Trinidad and Tobago international was involved in a collision with a truck on a country lane in Warrington.

The club is deeply shocked and saddened to hear that our legendary midfielder and Gothenburg Great, Neale Cooper has tragically passed away. pic.twitter.com/eufY7zjUsA

Gilzean became an idol to Tottenham fans over a ten-year career at the club which saw him play over 300 games.

Leeds confirmed that legend Paul Madeley had died on July 23.

Everyone at #LUFC is deeply saddened to hear of the passing of #LUFC legend Paul Madeley. Our thoughts are with his family and friends pic.twitter.com/JgEGUhSBKV

In October it was announced that former Aston Villa chairman Sir Doug Ellis had died at the age of 94.

In 1993, Villa Park’s Witton Lane Stand was renamed the Doug Ellis Stand in his honour.

Jimmy Greaves nicknamed Ellis Deadly Doug due to the number of managers he sacked during his two tenures.

Beattie helped Ipswich win the FA Cup in 1978 and the UEFA Cup in 1981 but was forced to retire due to multiple injuries in 1981.

Former Arsenal chairman Peter Hill-Wood died at the age of 82, on December 28.

Hill-Wood was chairman for over 30 years between 1982 and 2013 before ill-health forced him to step down.

Arsenal have confirmed they will be holding tributes for him in their upcoming games against Liverpool and Fulham.

Black armbands for Liverpool (a)

Black armbands and a minute's silence for Fulham (h) pic.twitter.com/zl78POJsQh