The widow of famed dancer Gene Kelly has criticized Good Morning America Host Lara Spencer over a segment appearing to mock Prince George over his fondness for ballet.

Patricia Ward Kelly penned an open letter on Friday in response to the GMA segment, in which Spencer held back laughter after mentioning the six-year-old is taking ballet lessons.

‘In 1958, my late husband, the dancer, director, choreographer Gene Kelly, decided to take on the stigma facing male dancers in an Omnibus television program for NBC that he created and starred in called ‘Dancing, A Man’s Game’,’ wrote Ward Kelly.

‘Gene would be devastated to know that 61 years after his ground-breaking work the issue of boys and men dancing is still the subject of ridicule—and on a national network,’ she continued, adding ‘ABC must do better.’ 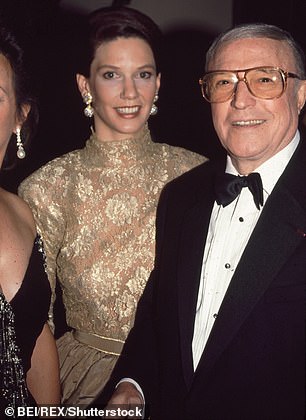 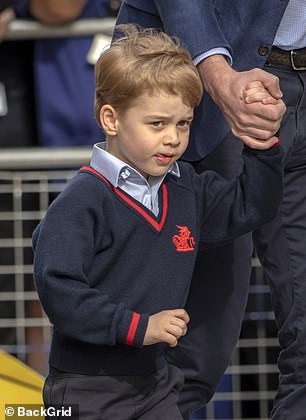 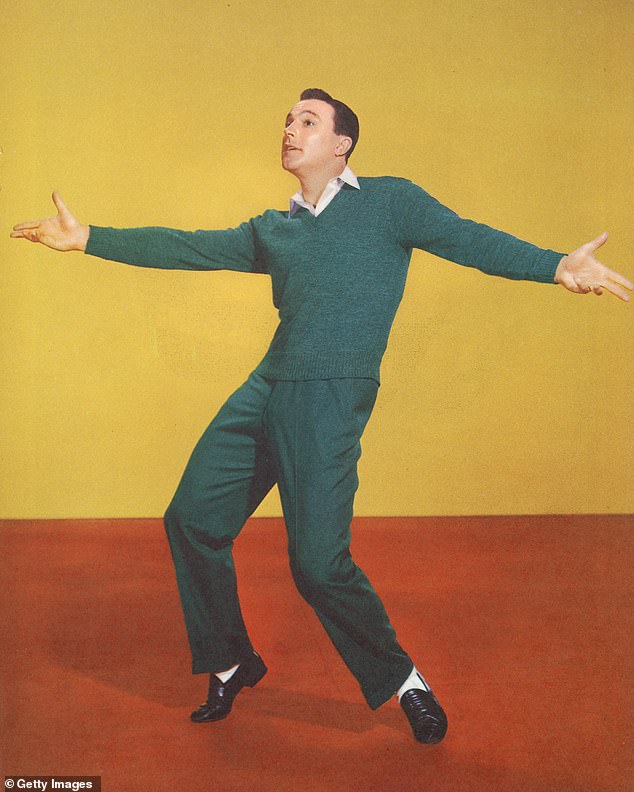 Gene Kelly, seen sometime around 1950, was a world famous dancer and movie star 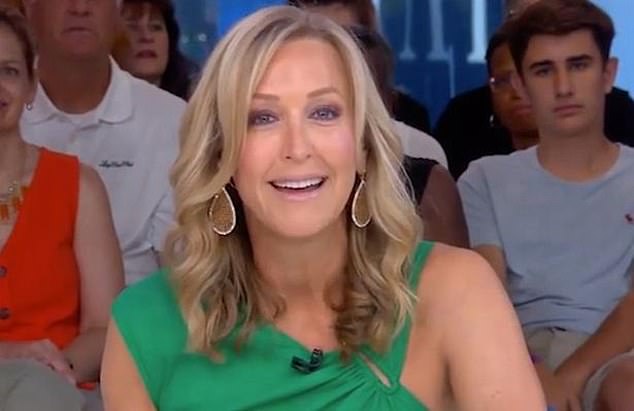 Spencer has apologized after drawing furious backlash for the segment on Thursday morning.

She revealed that the Duke and Duchess of Cambridge’s eldest child would be studying maths, science, history, religious studies, computer programming, poetry and ballet.

After Spencer said ballet, some members of the studio audience laughed, as did the presenter and her fellow host George Stephanopoulos.

‘Oh, he looks so happy about the ballet class,’ Spencer said, as images of George popped up on the screen.

She then claimed William said his son ‘absolutely loves ballet’.

‘I have news for you, Prince William: We’ll see how long that lasts,’ she said. ‘I mean, he might.’

‘Boys who take ballet are cool,’ she said.

Director and choreographer Debbie Allen, who worked on 80s TV show Fame, said ‘this is just not cool’.

‘Look at the great contributors to the world, in society. Men that have studied dance (such as) Steve Jobs. Hello.’ 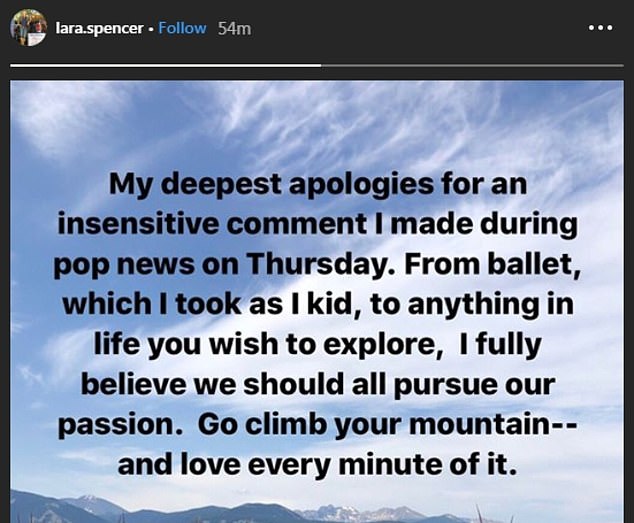 Choreographer Brian Friedman, who has worked with stars such as Britney Spears and Beyonce, said the presenter should be ‘ashamed’.

‘Growing up as a dancer I was bullied horribly which is exactly what this is,’ he said.

‘She is teaching the word that it is ok to laugh at boys for dancing and that is so sad. Just think about the young boys who may have seen this and could quit their passion at her expense.’

‘My sincere apologies for an insensitive comment I made in pop news yesterday,’ she said.

‘From ballet to anything one wants to explore in life, I say go for it.

‘I fully believe we should all be free to pursue our passions.

‘Go climb your mountain-and love every minute of it.’

In 1958, my late husband, the dancer, director, choreographer Gene Kelly, decided to take on the stigma facing male dancers in an Omnibus television program for NBC that he created and starred in called “Dancing, A Man’s Game.” He hoped that by aligning the great sports stars of the day—Mickey Mantle, Johnny Unitas, Vic Seixas, Sugar Ray Robinson, among others—he could challenge and destroy the shame surrounding male dancers once and for all. For Gene it was more than a professional task. It was, in his words, a personal “crusade” to show that dancers are athletes and that it is okay for a man to be graceful. As he says in the special: “What could be more graceful than a football player throwing a pass—what is more excitingly beautiful than the swift movement of a double play? Every motion a good athlete makes is as beautiful as any a dancer makes.”

Sadly, on August 22, 2019, Good Morning America elected to run a disgraceful segment about Prince George and his ballet classes. That host Lara Spencer would mock a boy’s study of ballet in a nationally televised morning show and that her colleagues would join in her derision is both unacceptable and incomprehensible.

Gene was a classically trained ballet dancer and believed that his training was essential to all that he did. He was schooled in Chicago by a woman named Berenice Holmes who had been the student of the great Russian dancer Adolph Bolm. Gene said that Holmes could perform many complicated turns better than a man, including a double tour en l’air, and that she instructed him to dance with great strength, particularly in his arms. He knew that ballet training gave him the long, beautiful line that he sought in his dancing and, later, in his choreography for the camera that led to some of the seminal films of our time, including On the Town; An American in Paris; Singin’ in the Rain; Brigadoon.

Over the years, Gene advised many professional athletes to study ballet, including former wide receivers Willie Gault and Lynn Swann. Both acknowledge that the training improved their performance on the field. Many have followed suit. Gene would be devastated to know that 61 years after his ground-breaking work the issue of boys and men dancing is still the subject of ridicule—and on a national network.

ABC must do better.