A Georgia mother has been charged with murder for dropping her three-month-old baby while being slapped by a woman outside a beauty store.

On July 19, she got into a fight with an unidentified woman outside a beauty store in Moultrie, Georgia, and dropped her three-month-old son in a concrete parking lot. 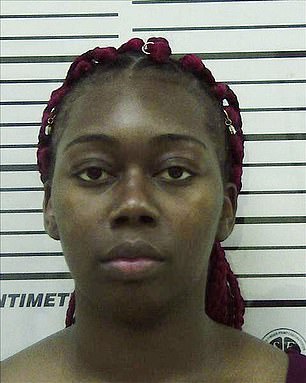 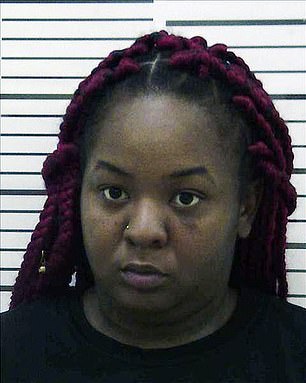 Karen Lashun Harrison (left) is charged with felony murder after police say her 3 month old baby fell from her arms during a fight with a woman at a Moultrie business, then later died. Right is Carneata Clark who is charged with providing a false statement and writings as well as obstruction. She was not involved in the fight itself but is accused of lying to police afterwards

The incident was caught on the store’s surveillance cameras.

Video of it shows Harrison cradling her son in one arm and approaching the other woman as they stand next to a car in the parking lot.

The other woman then swung a shopping bag full of goods to hit Harrison in the face.

She lost her balance and her grip on the baby then fought back, dropping him.

As they scrapped in the parking lot, several others ran over. A stranger picked up the baby boy, who they’d left lying on the ground, to fight.

Harrison waited a day to take him to the hospital then, when she did, police say she lied about how he’d become injured, claiming that he fell and was being looked after by a relative.

He later died. The results of his autopsy have not yet been released.

Now his mother and Carneata Clark, a 26-year-old family friend who also allegedly lied about how he’d hurt himself, have been charged. 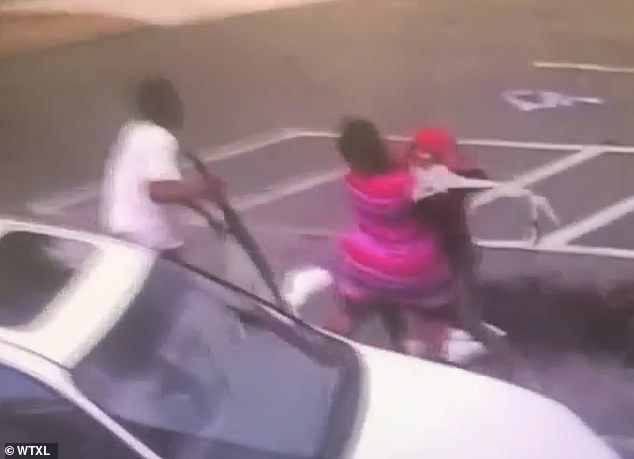 When the other woman (dressed in pink) swung a bag at Karen and hit her in her face, she dropped her son on the concrete. Their fight was broken up and she took the baby to the hospital the next day but he died 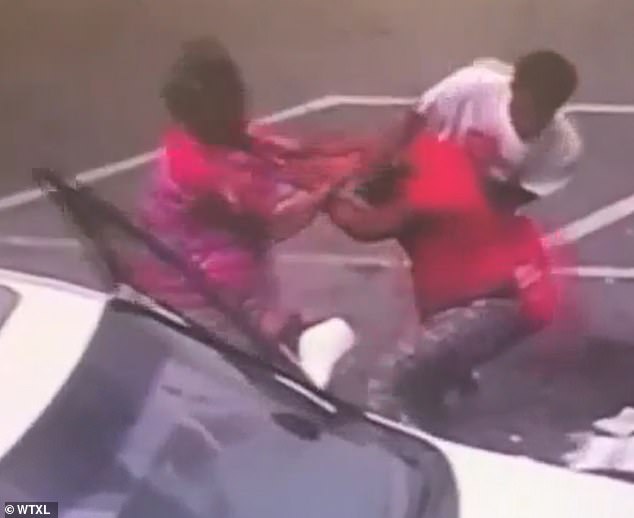 With her baby lying on the floor, Karen (right) and the other woman (left) continued to fight while a man tried to break them up 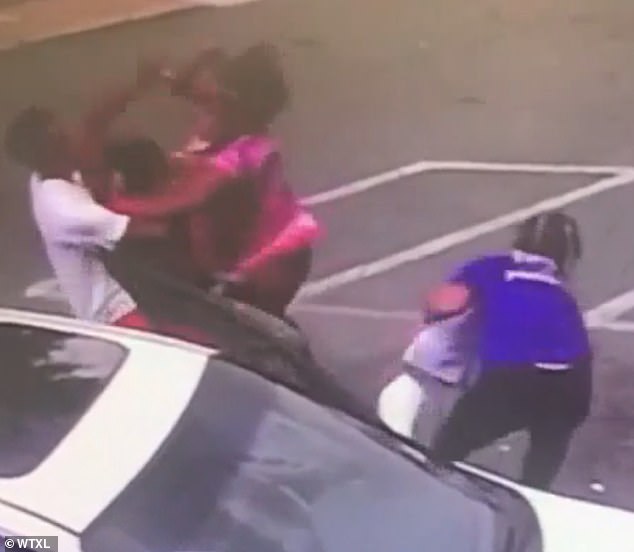 It took several seconds, while the two women and a man (left) kept tussling, until another person (right in blue) ran over to scoop up the baby

A spokesman for the Moultrie Police Department condemned both women, telling ABC: ‘It’s very disturbing tat two adults would fight in a public place while holding a three-month-old child in their arms.’

The woman who his mother was fighting with outside the store has not been arrested or named.

The case echoes that of a pregnant mother who was threatened with manslaughter charges after being shot in the stomach while five months pregnant.

That woman was never indicted.

It remains unclear what Harrison and the other woman were fighting about in the parking lot and if they were known to each other.

Police say that while no one else has been charged yet, their investigation is ongoing.

Bus passenger is hit with a £476 fine and a criminal record after her iPhone battery died
Donald Trump IGNORES Nancy Pelosi's outstretched hand before State of the Union
Monica Lewinsky's parents break silence about Bill Clinton affair and share never-before-seen photos
'Get rid of her! Do it!' Feds have tape of Trump apparently telling aides to fire Marie Yovanovitch
GP mother Susan Allanby 66 from Cardiff died after falling down stairs in high heels on holiday
Nissan Qashqai 'ploughs into pub smoking area to kill man in his 40s and injure three others'
Trump calls on Republicans to vote for the WEAKEST Democrat in primary to sabotage the contest
Mother-of-two ditches vegan diet she followed for 15 YEARS and now she ONLY eats meat