Angela Merkel has been seen shaking for the second time this month as fears grow for the German Chancellor’s health.

Merkel was seen shaking as she met President Frank-Walter Steinmeier on Thursday, footage showed – her second shaking bout within two weeks – but her spokesman said the German chancellor was fine.

On June 18, Merkel was also seen shaking when she met visiting Ukrainian President Volodymyr Zelenskiy but later said she felt better after drinking some water. 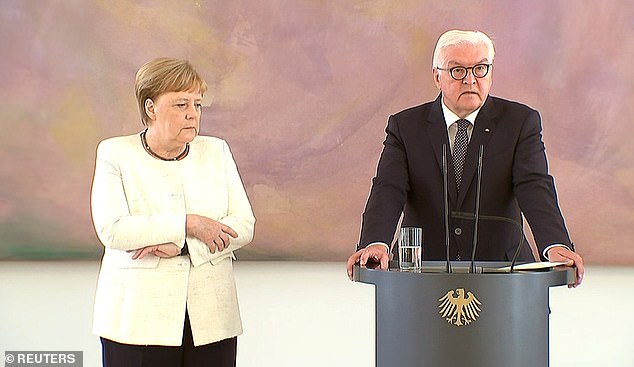 Merkel, 64, was attending a ceremony to decommission Justice Minister Katarina Barley, who is leaving to become a lawmaker in the European Parliament.

Merkel’s spokesman said she would participate later in the swearing in of the new justice minister.

Asked if the chancellor would take part in this weekend’s G20 meeting in Japan, the spokesman said: ‘Everything is taking place as planned. The chancellor is well.’

Merkel, 64, told students on Wednesday last week ‘I feel well’ during a visit to Goslar in Germany’s Harz mountains after shaking during her meeting with Zelenskiy.

There's Something About Miriam star mysteriously dies aged 38
Man, 29, who only moved to Hawaii last year is revealed as first victim of the Oahu skydiving crash
Iran says it will break its faltering nuclear deal by raising its enrichment of uranium
Love Island bosses 'sought out PG contestants who DIDN'T want to have sex on TV'
Hillsborough families' fury after football club secretary is fined £6,500 over disaster
Water-ravaged Britain braces for another deluge as Storm Jorge hits
Task force to investigate Vermont orphanage abuse
Brexit: Theresa May loses vote by 344 to 286 as PM hints at election