A mum was beaten up and threatened with an acid attack by a vicious ex who she says had her wrongly arrested for smuggling cocaine into America.

Gareth Pierce headbutted Catherine Worsley leaving her covered in blood then threatened to douse her in acid if she didn’t drop charges.

But she outsmarted the cowardly thug by recording his disturbing phone calls, leading to him being jailed for his sickening violence.

Now she wants to reveal the horrific ordeal he put her through, to encourage other people suffering domestic abuse to speak out. 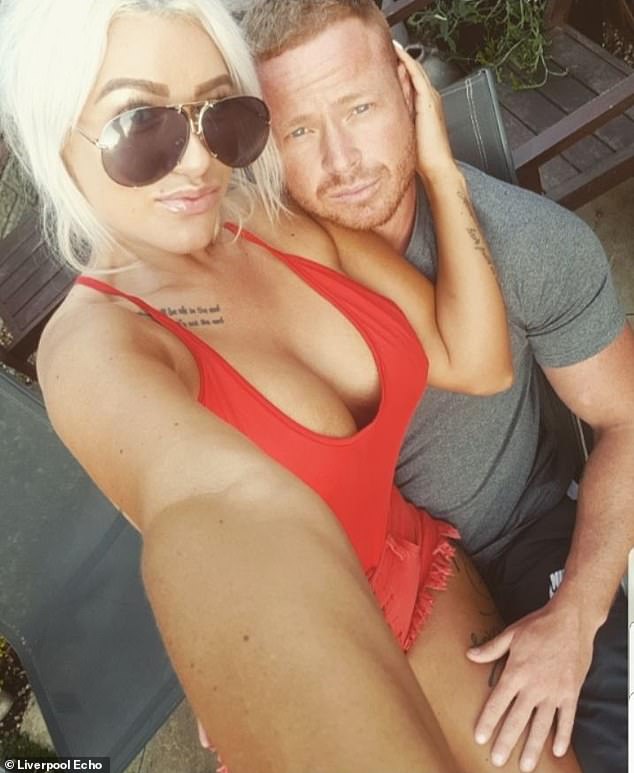 Catherine said the 36-year-old bully, from Widnes in Chesire, was jealous and controlling throughout their relationship.

However, the children’s residential support worker, who has an eight-year-old son, said the thug made her believe he loved her.

He was previously locked up in 2011 for supplying cocaine to undercover police, then convicted of dealing again in 2014.

When he started seeing her in 2016, she said he was often out of work and had little money, but she told him to stay away from drugs.

The 28-year-old mum said she had ‘no chance’ of fighting back against the muscular labourer, who always apologised the next day. 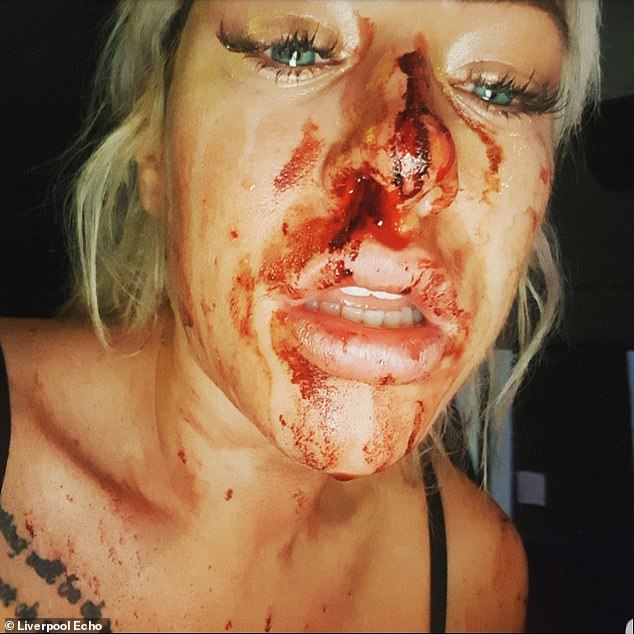 Catherine first broke up with him after he attacked her while she was sleeping beside her son over Christmas last year.

She said: ‘He wanted to drive my car drunk. He was strangling me and told me he wanted to kill me.

‘I was being sick in my mouth and couldn’t breathe. He eventually let go, telling me I wasn’t worth the jail time.’

Catherine’s mother rang the police, leading to Pierce calling her a ‘grass’, ahead of aterrifying incident on a train in February.

She said: ‘It was because another lad looked at me. He got his head and smashed it against the seat in front of him. 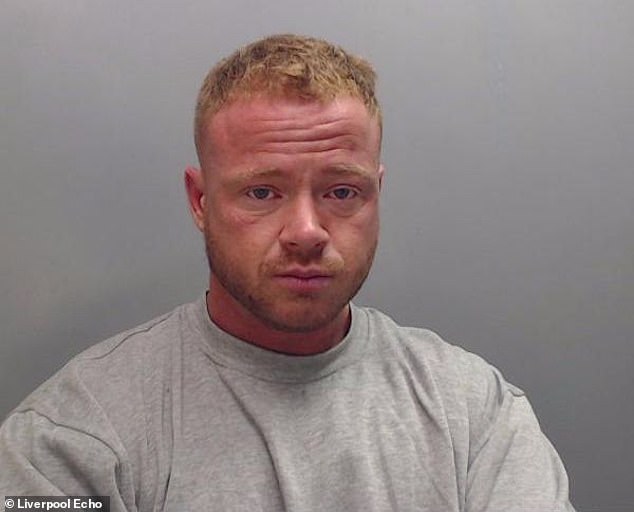 ‘There was blood everywhere. Then a young girl said ‘what are you doing?’ and tried to intervene. He punched her in the face.

‘Her face just splattered with blood. I tried to calm him down and he bit my face and smashed it against the window.’

Catherine said Pierce often accused men of staring at her on nights out, yelling ‘what the f*** are you looking at?’ and starting fights.

She said: ‘The amount of times we got kicked out of clubs and even restaurants – he was just really possessive and jealous.’

That month, Pierce was convicted of four counts of battery and received 18 weeks in jail, suspended for two years.

Catherine said: ‘He got such a little sentence because I refused to attend court and later withdrew my statement.

‘I was scared to go through with it, because I know what he is capable of.’

She told Liverpool Crown Court this week how he then tried ‘everything possible in his power to ruin my life’.

Catherine said: ‘He harasses me and stalks me. He’s tried his best to have my child taken off me and he’s posted indecent images of me on social media.

‘There is not much more he can do than fulfil the threats to kill me. I live every day in fear of this.’

She said Pierce seemingly went one step further when he found out she was jetting off to Las Vegas with her friend in April.

Catherine said: ‘A picture was posted on social media, which he saw. He went ballistic.

‘I believe he rang Manchester airport security, stating we had £20,000 of cocaine between us and we were smuggling it into Las Vegas.

‘When we landed in Vegas, we were handcuffed and arrested by security agents on the plane. We were held in custody for nine hours, questioned and intimidated.

‘We were sent to Spring Valley Hospital to have stomach X-rays and full CT scans. The results came back all clear and we were both released without charge.’

Pierce continued to harass Catherine, leading to her making more complaints, which she retracted due to threats ahead of a court case. 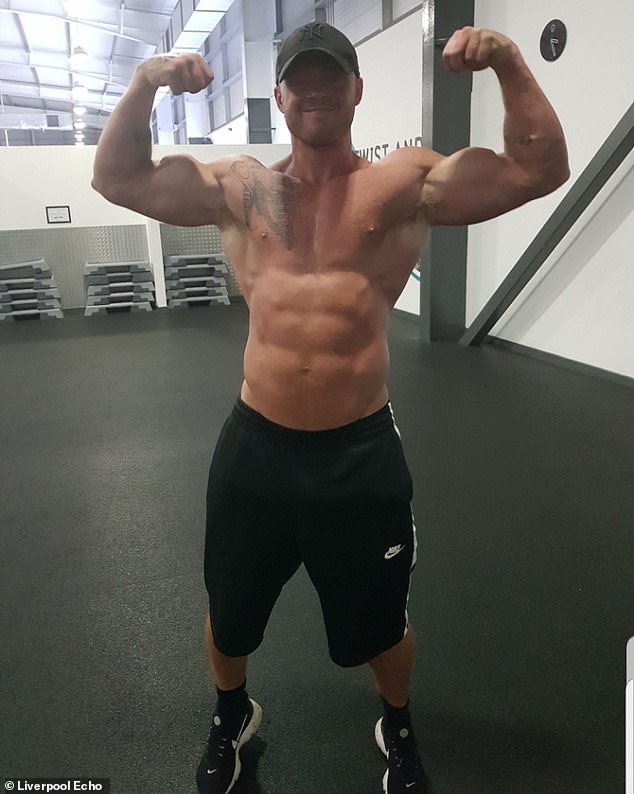 But the worst was yet to come, after he visited her house in August and accused her of sleeping with another man, which she denied.

He threatened to kill them both, pinned her to the bed, punched her and screamed ‘I love you’.

Pierce went quiet, then headbutted her, causing her nose to ‘crunch’ and blood to pour down her face.

Catherine recalled how her cowardly attacker said: ‘Look what you’ve made me do to you – you made me do this.’

She said: ‘He locked me in my bedroom for six hours and took my phone and keys. He said he would kill me, then kill himself and if he couldn’t have me, nobody could ever have me.

‘For hours I cried, begged and pleaded for him to let me go to my mum’s house. I even looked him in the eyes and promised him I wouldn’t go to the police – all I wanted was my mum.

‘After six hours he let me go, threw my front door keys at me and told me ‘run’.’

The victim said every time they split up, he would make terrifying death threats.

She said: ‘He would always tell me he didn’t mind going to jail, as he had nothing to lose. ‘Never f*** with a man who has f*** all to lose’ was his favourite sentence.

‘I sat for hours in that bedroom, covered head to toe in my own blood. I never thought he was going to let me go. 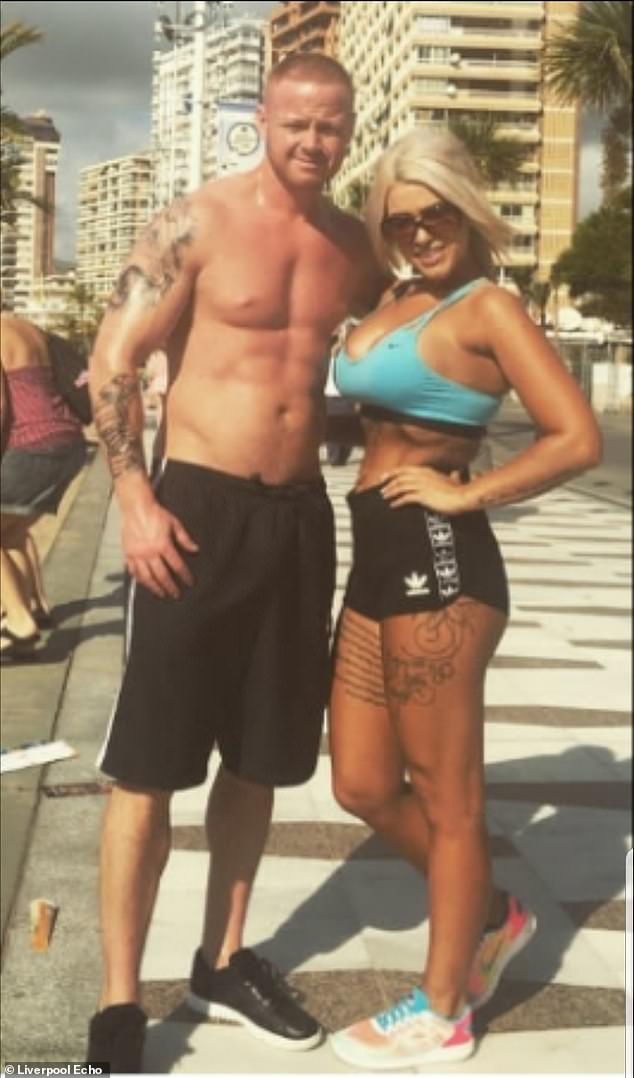 ‘As he repeatedly told me he was going to kill me, I remember thinking to myself, ‘it’s going to break my mum’s heart having to witness her daughter’s dead body, but then break her heart even more having to tell my baby boy he’s never going to see his mummy again’.’

After being remanded in prison, Pierce begged Catherine to lie about the attack or not attend court, before issuing more vile threats.

‘I promise you, all your beautiful looks are going to go and it’s going to happen very soon. You’re a beautiful girl, but not for very long.

‘You’re going to have a mad f***ing looking swollen burnt face and I will laugh when it happens. Your son won’t even recognise his own mother.’

She told the Liverpool Echo: ‘Thank God I recorded the phone calls to give to police.’

Jailing him for 33 months, Judge Robert Trevor-Jones said his phone calls were ‘chilling’ and his threats ‘ugly’.

Catherine told the court: ‘I’ve lied to everyone for two years. If people said ‘are you okay?’ I would reply ‘yes’. That’s the biggest lie I’ve ever told.’

She is now receiving counselling.

Catherine said: ‘You start blaming yourself and thinking ‘it’s my own fault, because no-one else goes through stuff like this’.

‘I don’t want a penny – if I get my story out there that’s not the reason behind it – it’s to raise awareness.

‘It’s not until now I look back at the two years and I realise, because at the time I used to convince myself ‘it’s fine, it’s normal, he loves you, he’s sorry’. Now looking back, I think ‘why did I put up with it?’

If you are suffering from domestic violence, contact the police or the National Domestic Violence charity on freephone 0808 2000 247.