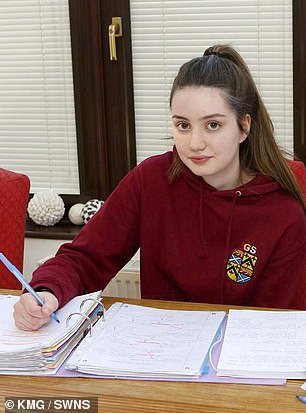 A grammar school pupil accused of sprinkling nuts on her allergic teacher’s desk has been excluded despite passing a £600 lie detector test her father paid for.

Alexandra McDonald, 16, was suspended for 20 days alongside Maddie Colley, 17, after they were accused of targeting a teacher with a severe nut allergy at Rochester Grammar School in Kent.

Both pupils maintain their innocence and Alexandra’s father, Peter McDonald, paid for a lie detector test that found she was telling the truth.

The two-hour polygraph test he hired claims to be 98 per cent accurate.

Mr McDonald, 64, said: ‘They said there was a witness who saw the girls giggling in the hallway close to the classroom during the time period they think it happened.

‘The teacher apparently looked up because they heard the giggling – but that isn’t evidence that they did it.

‘The school said they excluded the girls based on the probability that they did it, there is no evidence.’

Alexandra says she was simply searching for her blazer with Maddie in a free period.

She will now have to sit her A-level mock exams at a different school and in isolation.

If severe enough, allergic reactions to nuts can be fatal as the throat swells and can choke the person. 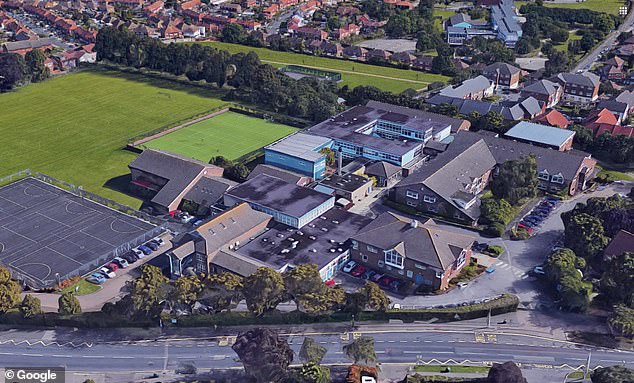 ‘Alexandra is really stressed, she has never been in any trouble before, this is the harshest punishment before expulsion,’ the father of three said.

‘The report from the lie detector is 98 per cent accurate, so it does prove she is telling the truth.

‘When I heard why she was excluded I had to get the school to repeat it twice, I couldn’t believe it. 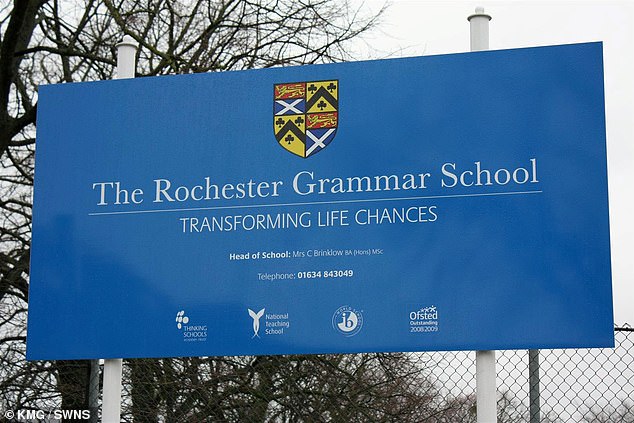 ‘The exclusion will be appealed to the school governors, so I got the lie detector done to prove her innocence.

‘I told the school about the lie detector and they weren’t interested, it’s so frustrating.’

WHAT IS ANAPHYLACTIC SHOCK?

Anaphylaxis, also known as anaphylactic shock, can kill within minutes.

It is a severe and potentially life-threatening reaction to a trigger, such as an allergy.

The reaction can often be triggered by certain foods, including peanuts and shellfish.

However, some medicines, bee stings, and even latex used in condoms can also cause the life-threatening reaction.

According to the NHS, it occurs when the immune system overreacts to a trigger.

It is considered a medical emergency and requires immediate treatment.

Insect stings are not dangerous for most victims but a person does not necessarily have to have a pre-existing condition to be in danger.

An incremental build-up of stings can cause a person to develop an allergy, with a subsequent sting triggering the anaphylactic reaction.

But the girls-only school defended the decision.

A spokesperson said: ‘We make no apologies and are surprised a parent of one of the students does not see the seriousness of their actions.’

It was added that parents are aware of a ‘no nuts policy’, which has been in place for 20 years.

Alexandra, who plans to study at the University of Kent to become a teacher, said ‘I’m gutted.’

‘When I was told I was going to be excluded I was shocked, I couldn’t speak.

‘I’ve always wanted to be a teacher but this makes me think it’s not something I want to do, if this can happen to an innocent person. It definitely was not me.

‘I loved school and the environment, I thought all the teachers were really friendly, understanding and there to help.’

People who are allergic to nuts can go into anaphylactic shock and in the most serious cases, their throats can swell and they can choke to death if they don’t get urgent treatment.

Alexandra claims she was ‘searching for her blazer’ during a free period with Maddie when a teacher ordered them downstairs to another classroom.

On their return, they saw the crushed food on the floor but thought nothing of it as break time had just finished.

Maddie is preparing to sit mock exams in PE, geography and psychology.

Her mother Michelle Colley told the Kent Messenger: ‘It’s just really disappointing. It was Maddie’s 17th birthday on her first day of being excluded so that put a dampener on things.

‘We have tried to convince the school but they have made their decision based on probability and they won’t listen to any other argument.

‘I am hoping they will reconsider on the new evidence. I don’t think we would go down the lie detector route but Maddie says she would take a test too.

‘This will go on her permanent record if it doesn’t get sorted. I fully believe her – if it was a practical joke she would have admitted it by now.’