Activists have ‘shut down’ the London headquarters of BP, using barricades to stop its staff entering as they enforce a seven-day blockade.

Greenpeace campaigners blocked all five entrances of the building in St James’s Square at 3am.

Workers arrived to find they were unable to enter as protesters wearing helmets sat on top of each container.

The activists have accused BP of ‘fuelling a climate emergency that threatens millions of lives’. 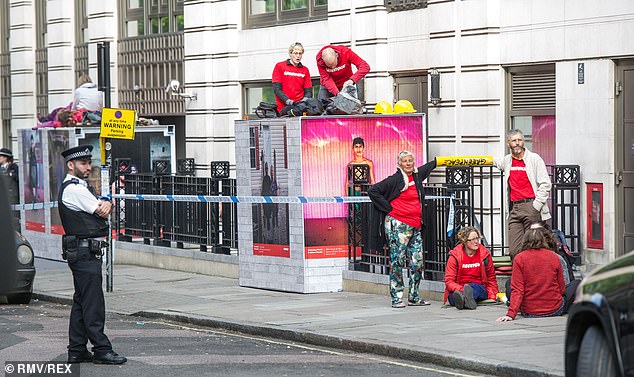 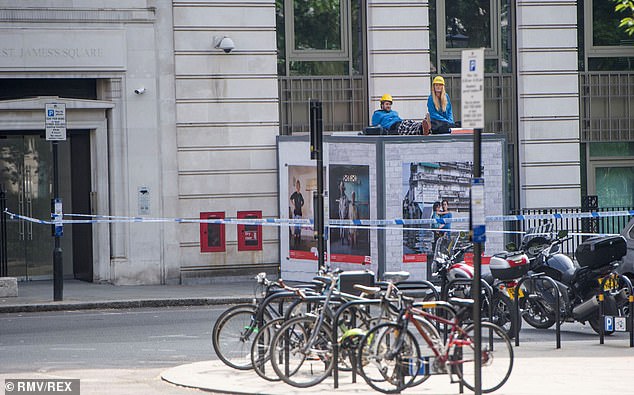 Greenpeace have started a seven-day demonstration at BP’s London headquarters (pictured, activists at the scene today)

‘This is a #ClimateEmergency and there is no place for companies like @BP_plc in our future. #BPshutdown.’

They added: ‘We’ve shut down @BP_plc’s HQ because business as usual is just not an option.

‘They are fuelling a #ClimateEmergency that threatens millions of lives. BP must clean up or clear out #BPshutdown.’

Greenpeace UK said that it had targeted them on the evening of the company’s annual general meeting. 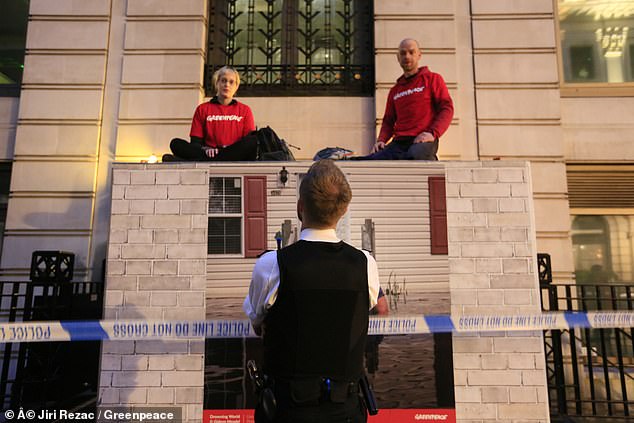 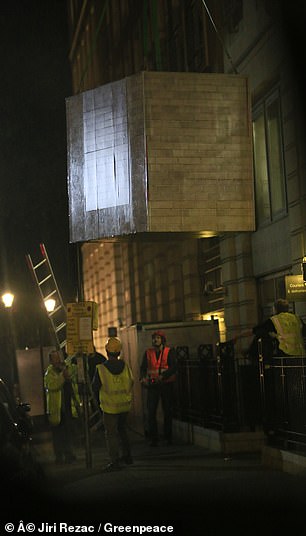 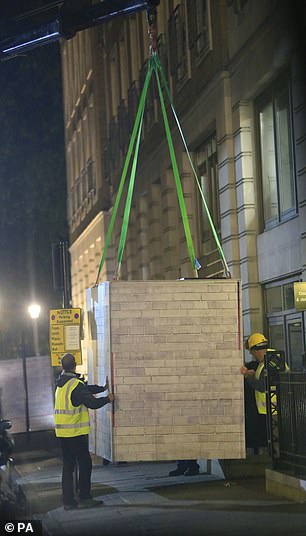 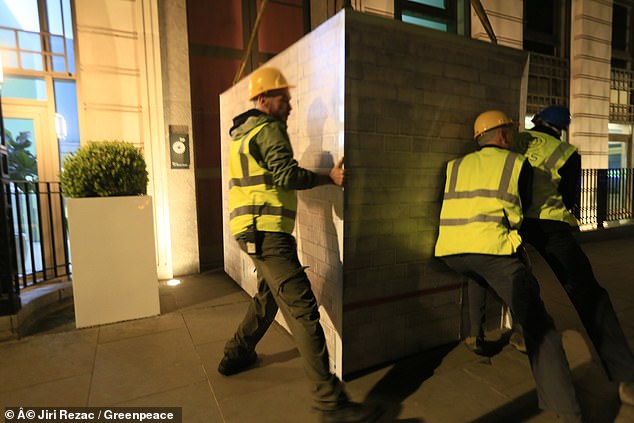 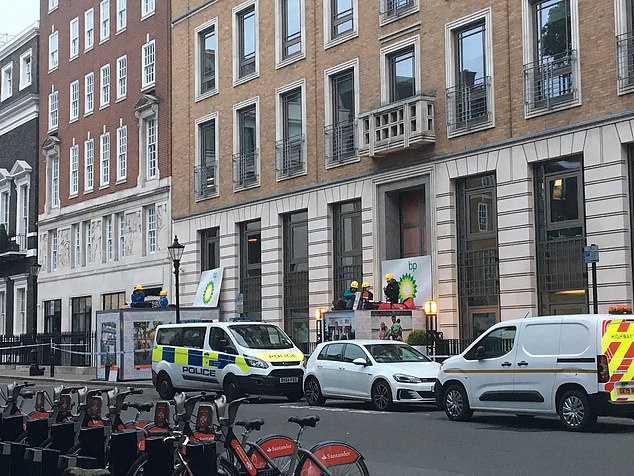 The activists’ demands include BP immediately ending all exploration for new oil. They also want the firm to invest solely in renewable energy.

A statement Greenpeace released today said: ‘BP has bowed to pressure from shareholders by backing a motion at tomorrow’s AGM asking the company to demonstrate how it is aligned with the Paris climate agreement.

‘But BP plans to expand its oil and gas production at a time when it needs to be dramatically reduced.’

A spokesman for Greenpeace said that by 8am police had attempted to clear the area of pedestrians but had not made any arrests. 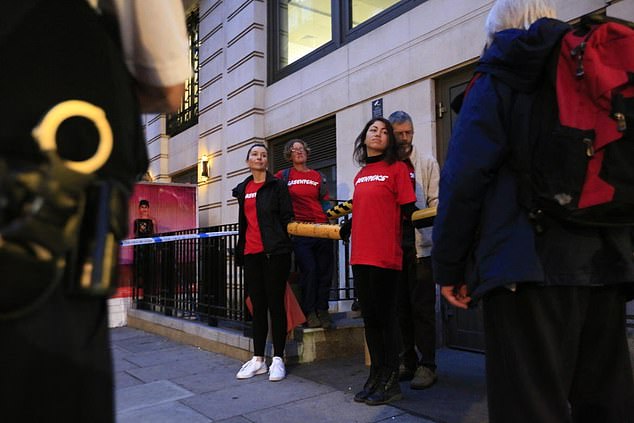 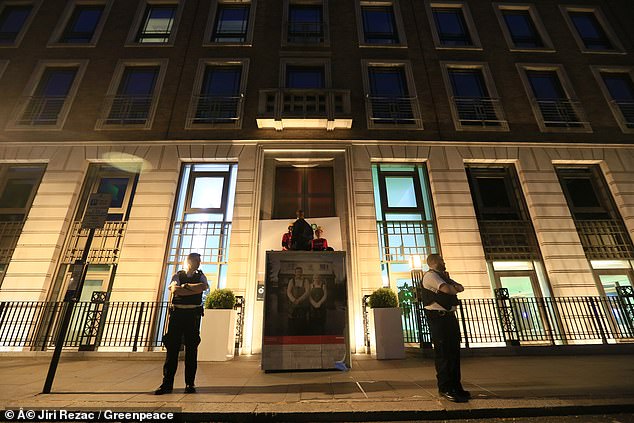 Paul Morozzo, one of the volunteers in the containers, said: ‘For too long, BP and the oil industry have paid lip service to climate action while lying and lobbying against it behind the scenes and spending billions scouring the world for more oil and gas.

‘The reality is that BP’s whole business plan is a heavy bet against our hopes to avoid a climate catastrophe and must change.’

The boxes feature photos from photographer Gideon Mendel’s Drowning World project, which looks at the impact of the climate emergency on people across the globe.

According to Greenpeace’s research, BP is outspending other oil giants on lobbying campaigns against climate action and spent £12.6 billion adding to its oil and gas reserves in 2018. Greenpeace said only £392.8 was invested in alternatives to fossil fuels.

Climate campaigner Morten Thaysen, 31, is protesting at the headquarters and said: ‘I think it has dawned on a lot of us that this isn’t something that will only affect the next generation, it is affecting us now.

‘It is taking politicians a long time to respond to our climate emergency because of companies like this. BP has spent millions lobbying against the exact climate action that we need.

‘It’s all about greed and making as much money as possible. And whether we have a liveable planet in the next 10 years does not matter to them.

‘This is not a day occupation, we have volunteers camping inside containers at the entrance of BP. They have supplies that should last for a while. There are two people in each container, we’ve even got some Netflix in there too. But there is no natural light or much room to move about but people are so passionate about this.

‘BP has two options, to transition to a 100% energy renewable company or just wind down. This is not just about BP, it’s about all of us. Even if we monitor our daily living habits, if companies like BP refuse to change, what we do won’t matter as much.

‘We will be in Aberdeen tomorrow at BP’s AGM meeting alongside other environmental organisations.’