Greggs has sparked debate on social media yet again – by teasing a controversial ham and pineapple bake.

The bakery wasted no time in brainstorming new ideas after the release of their vegan ‘sausage’ roll divided opinion last week.

But Greggs clearly has no reservation about continuing the controversy – and have teased a divisive flavour combo for an upcoming bake: ham and pineapple. 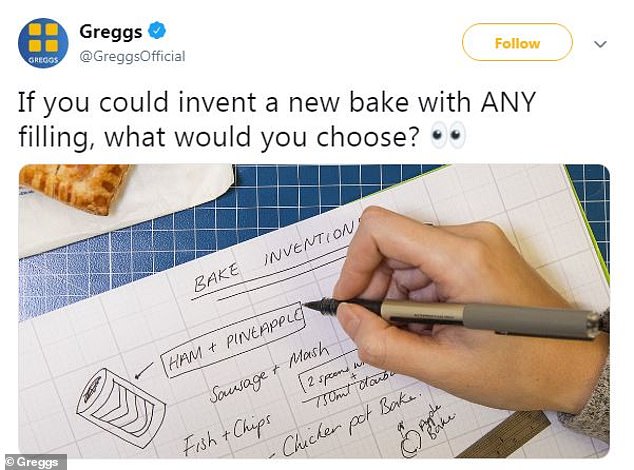 The bakery tweeted: ‘If you could invent a new bake with ANY filling, what would you choose?’

The Tweet was accompanied by an image showing a sketch of potential new bake flavours.

Next to a sketch of a bake, ‘HAM + PINEAPPLE’ is written with an arrow pointing towards the pastry. 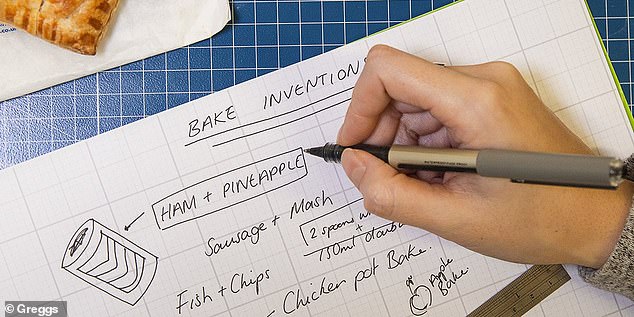 The Tweet was accompanied by an image showing a sketch of potential new bake flavours, including ham and pineapple

But the ham and pineapple suggestion, which was circled on the page, has gathered the most attention online.

The toppings are famously divisive on pizza – and it appears opinions don’t differ for a potential bake filling.

One Twitter user said: ‘Literally anything other than ham and pineapple you heathens.’

Sally Hart said: ‘If you’re actually serious about the ham and pineapple, I’m afraid it’ll be a national emergency.’

‘Don’t you dare put pineapple in anything,’ another exasperated Twitter user said.

Others were thrilled by the prospect, tweeting ‘I would be ALL OVER a ham and pineapple one what a dream’.

Others were thrilled at the prospect, tweeting ‘I would be ALL OVER a ham and pineapple one what a dream’

Some social media users were excited by any potential new flavours, and even took to Twitter to suggest their own inventions.

These included a vegan chicken and steak bake, cheese and marmite pastries, and even a lobster thermidor option.

Some social media users even suggested their own potential flavour combos, including cheese and marmite and lobster thermidor