The death of 17-year-old Yousef Makki ‘has torn a huge, empty hole inside of everyone’s hearts’, his family said as hundreds of people gathered for the funeral of the teenager who was stabbed to death in Greater Manchester.

Yousef, who dreamed of becoming a heart surgeon, was attacked on March 2 in Hale Barns, a leafy village south of Manchester.

On Friday, his family was joined by hundreds of people at the Dar Al Hadi Foundation, in the Ardwick area of the city, for a traditional Muslim funeral service ahead of a burial ceremony at Southern Cemetery. 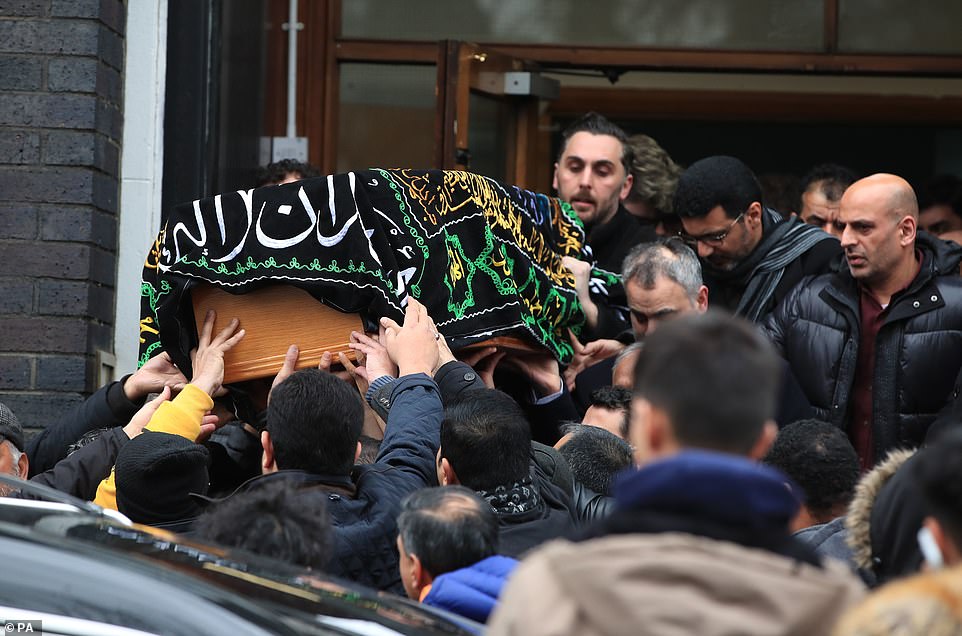 The coffin of 17-year-old Yousef Makki from Burnage, is carried from the Dar Al Hadi Foundation, in Manchester 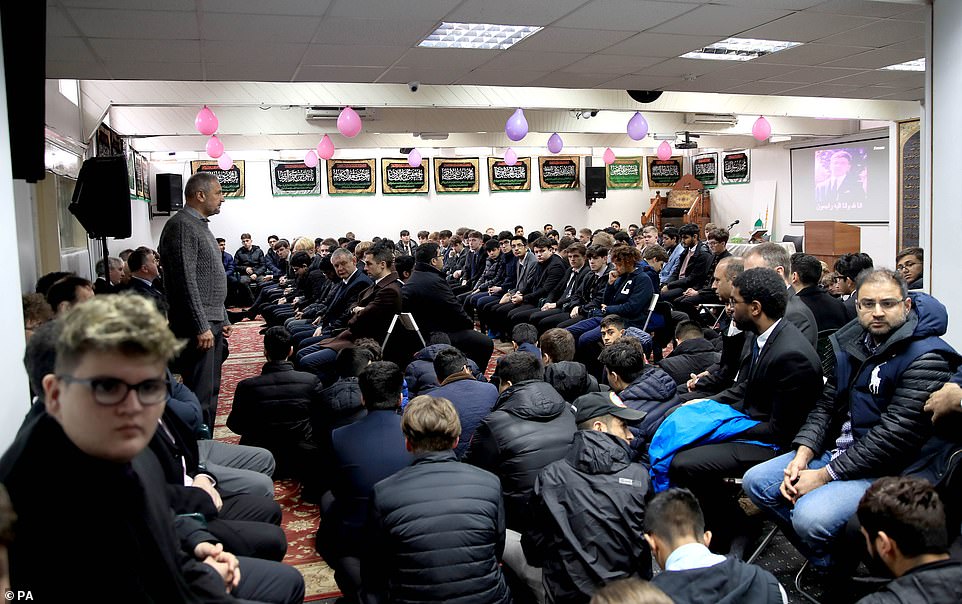 Crowds of mourners gathered today inside the meeting hall of the Dar Al Hadi Foundation in Manchester, a charity that runs educational and social projects from youngsters 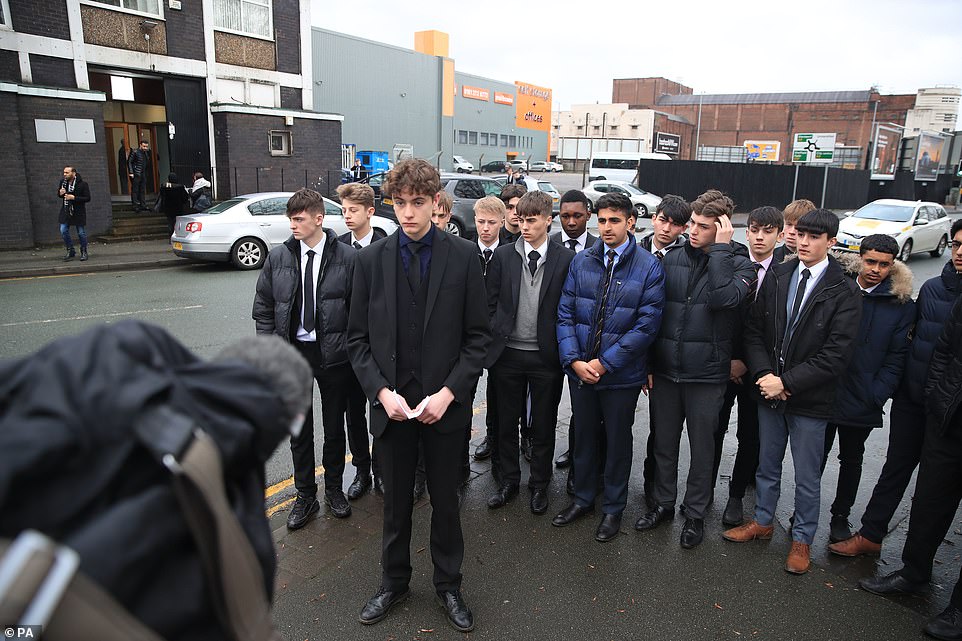 Friends of the victim stood outside the venue in jackets and ties as one pupil, Robin Tetlow-Shooter, read a statement to the Press. They then filed in to the building, which was packed with well-wishers 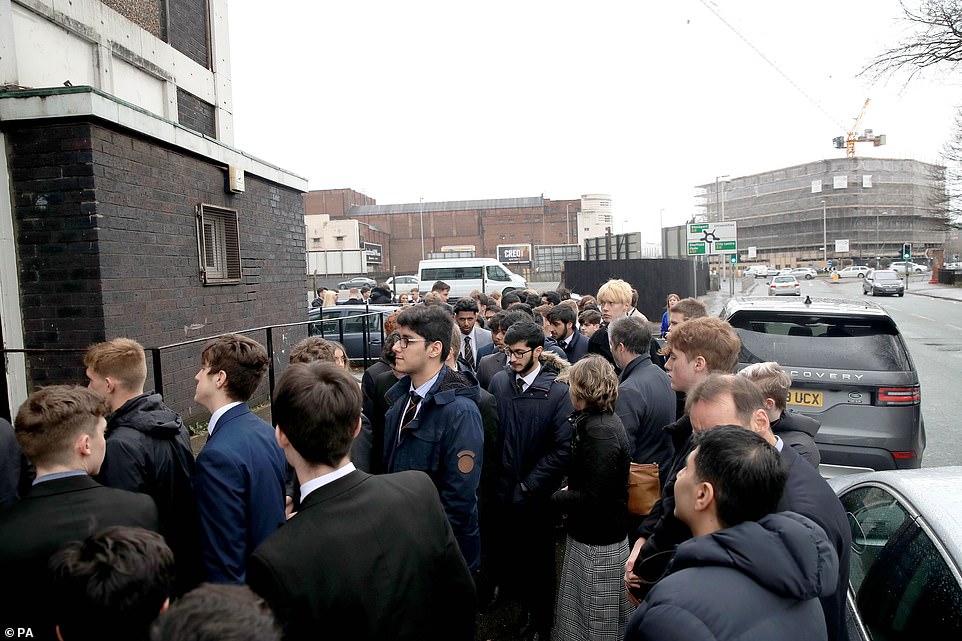 Young mourners – many wearing their school ties, file into Yousef’s funeral today at the Dar Al Hadi Foundation in Manchester

Among the mourners were scores of teenagers from Manchester Grammar School, where Yousef, from Burnage, was a student.

He is thought to have won a scholarship to attend the £12,000-a-year independent school.

Yousef’s family issued a statement to coincide with the service.

It said: ‘We can’t express how devastatingly painful the loss of a brother, son, cousin and ultimately a best friend has been. Our hearts will bleed eternally for the loss of our beautiful, clever and talented brother Yousef.

‘Yousef was an inspiration to all. His determination, wit and dedication to his family and studies were the foundations of his outstanding personality and he showed an extremely promising future that was tragically cut short.

‘Yousef’s early departure has torn a huge, empty hole inside of everyone’s hearts. For his friends, family and even neighbours, a world without him is a world turned upside down.

‘Yousef didn’t care about circumstances or which area he came from. Instead, Yousef strived to do the best he could and use any opportunities given to him to the fullest.

‘Words alone cannot convey the trauma and emptiness this has left, particularly for our family.

‘Although not in physical presence there are many, many lasting memories that we all have of Yousef that will last a lifetime, even though, unfortunately, he couldn’t.’ 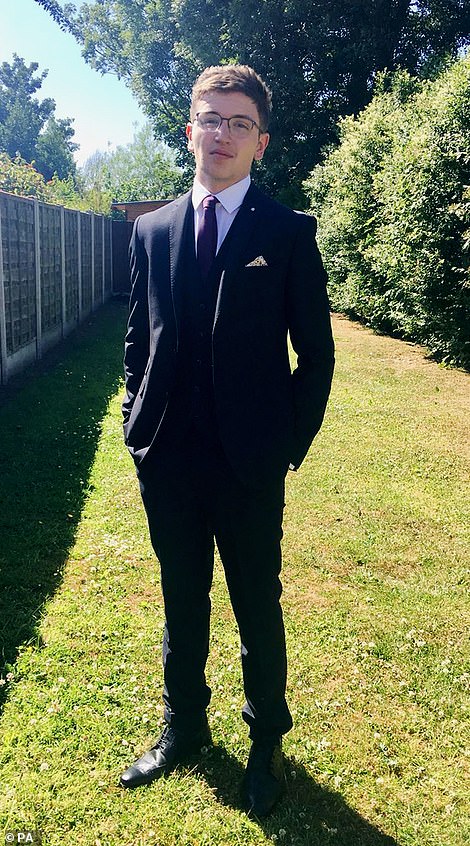 The teenager was stabbed in the village of Hale Barns at around 6.40am on March 2 on a weekend of violence that also saw the murder of Jodie Chesney, also 17, at a park in Romford, east London

Earlier, a pupil from Manchester Grammar School read a statement on behalf of Yousef’s friends.

Robin Tetlow-Shooter said: ‘We would like to thank everyone for their messages of support and condolences.

‘Yousef was a truly special person. We cannot express the magnitude of our loss.

‘He was the son every parent dreams of – loving, caring, kind yet ambitious and determined.

‘We have no doubt he would have lived to fulfil his dream of becoming a heart surgeon. Instead he was taken away from us as a result of a stab wound to his heart.

‘Yousef’s life will not have been taken in vain if we are able to achieve something positive from the debate that has ensued following his death. More police officers on the streets to protect our young people may be a good start. We will miss Yousef so dearly.’

The school organised buses for the students to attend the ceremony.

Yousef was stabbed in the village of Hale Barns at around 6.40am on March 2 on a weekend of violence that also saw the murder of Jodie Chesney, also 17, at a park in Romford, east London.

The teenager, from Burnage, Manchester, is thought to have won a scholarship to attend the £12,000-a-year independent Manchester Grammar School.

Officers attended the scene and Yousef was taken to hospital, where he died a short time later. Floral tributes have been left on the tree-lined street where Yousef was found.

A two-minute silence was held on Monday by pupils and staff at his school, which described him as ‘a dearly loved young man and incredibly bright pupil’ who was studying four A-levels and had aspirations to pursue a career in medicine.

In an earlier tribute, his family described the teenager as a ‘loving and caring son and brother’ who was sporty and a dedicated student.

‘We are absolutely devastated and cannot believe that our son has gone. This senseless loss has affected the whole community,’ they said.

‘Yousef had only phoned home hours earlier to say that he would be home for his tea, but the next knock at the door were officers with the tragic news, it is every parent’s worst nightmare.’ 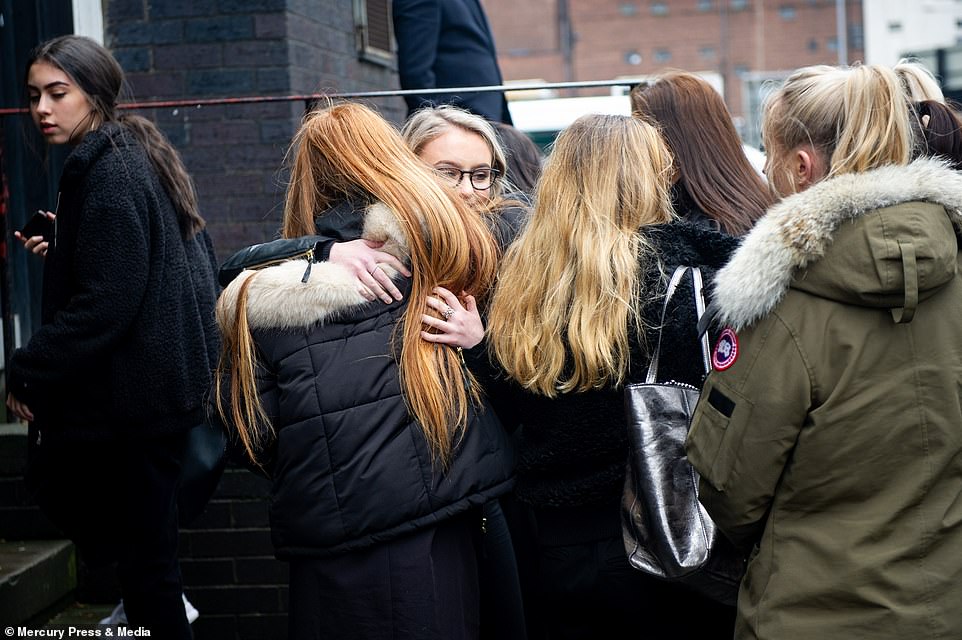 A group of mourners comfort each other outside the service, where Yousef was described by his family as ‘an inspiration to us all’ 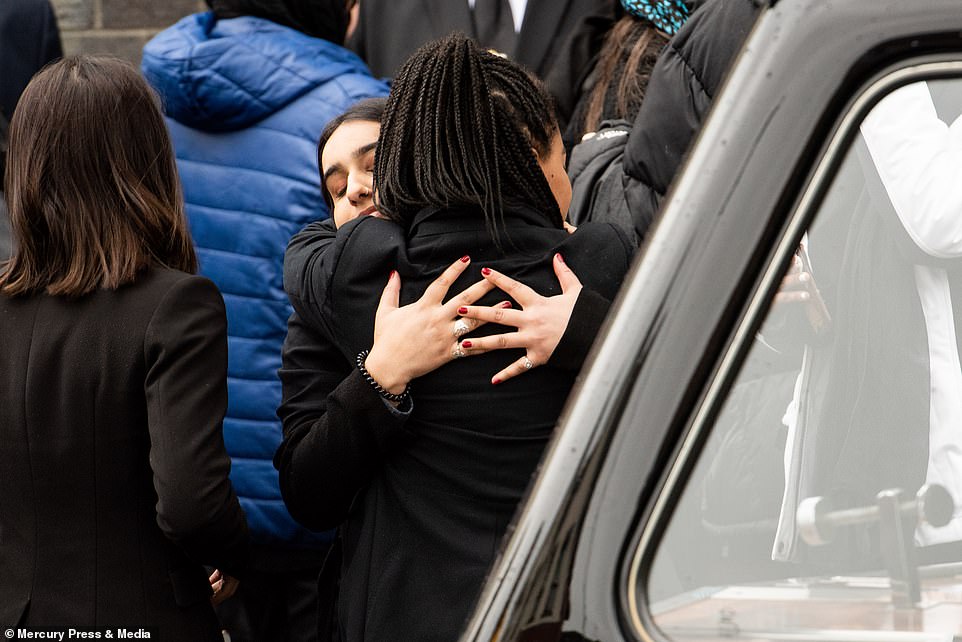 Among the mourners were scores of teenagers from Manchester Grammar School, where Yousef, from Burnage, was a student. The school organised buses for the students to attend the ceremony 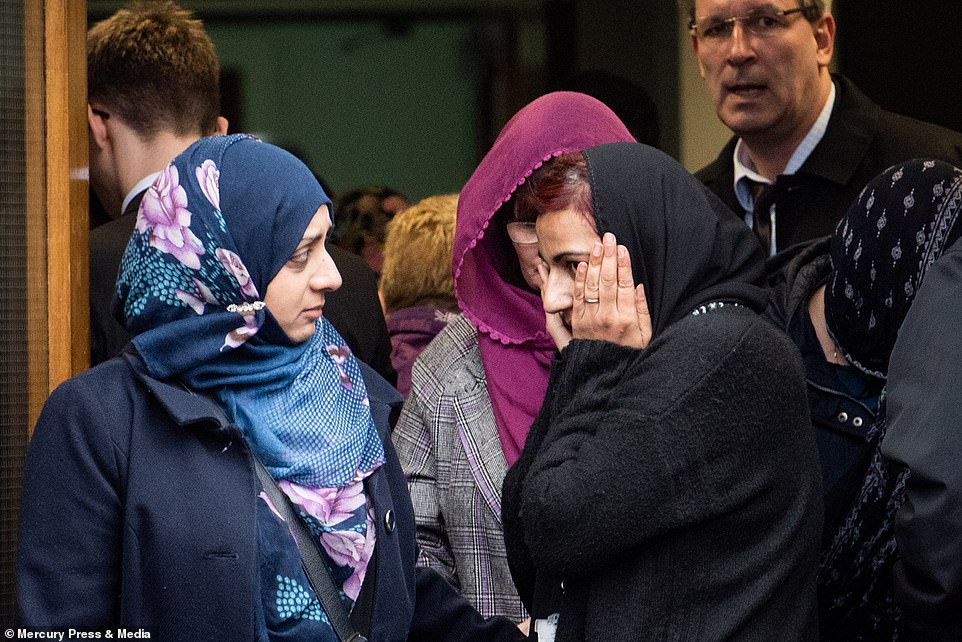 The ceremony today was attended by dozens of Yousef’s family and friends. A two-minute silence was held on Monday by pupils and staff at his school

A 17-year-old boy appeared in court last week to answer charges that he murdered the teenager.

The youngster’s mother broke down in tears as the teenager walked into Manchester’s Youth Court for the two-minute hearing.

The youth, who cannot be named for legal reasons, is accused of murder and possession of a silver lock-knife.

Another 17-year-old boy, who has been bailed, is accused of trying to help him dispose of the weapon.

Dressed in a grey sweat-shirt, black trousers and displaying a black-eye, the teenager acknowledged his mother and father with a brief nod and a downward smile as he stood in the dock.

The defendant was asked to state his name and give his date of birth. He nodded as he was told he would be remanded.

Meanwhile, the second teenager appeared in court, also last week, charged with assisting an offender and possession of a knife and was released on bail.

The 17-year-old, who cannot be named for legal reasons, was told to ‘keep out of trouble’ by magistrates.

He told he would be released on bail and ordered to come back to court in two weeks’ time. 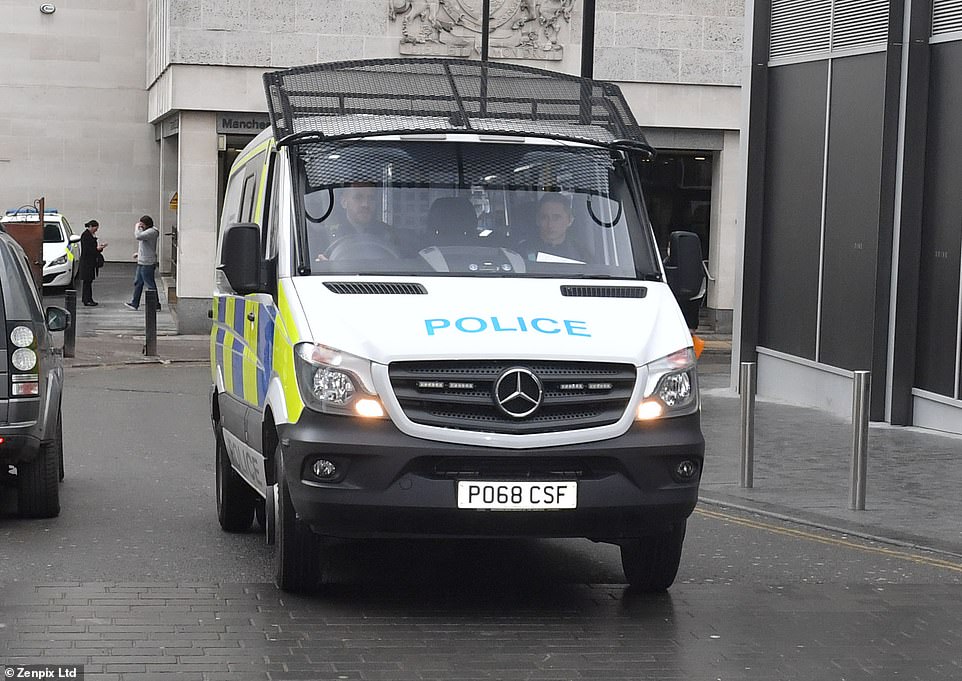 Officers attended the scene in Hale Barns on March 2 and Yousef was taken to hospital, where he died a short time later 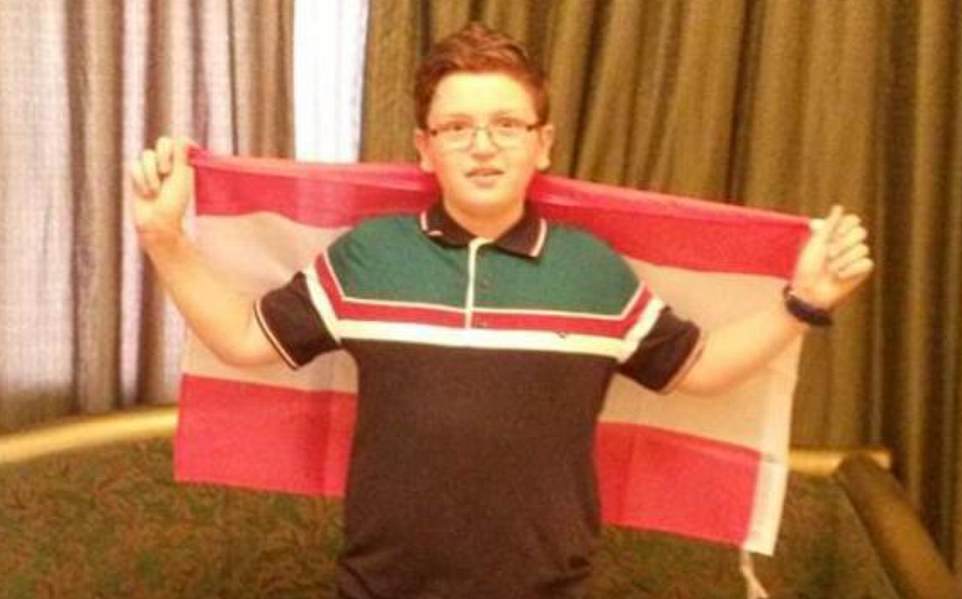 Yousef poses in Lebanese colours. He wanted to study medicine and become a heart surgeon