Nearly half of England’s health boards offer poor standards of care, according to Ofsted-style scores.

The figures suggest hundreds of thousands of people are not even diagnosed. And many who do get a diagnosis have to wait for more than a year between their care assessments.

An estimated 850,000 people in the UK have dementia but the number is predicted to soar to two million by 2050.

Experts last night said that Government promises to transform care have been ‘kicked into the long grass’ after a brief ‘flirtation’ with the problem.

Others warned that in some areas NHS officials view dementia care as little more than a ‘tick-box exercise’. 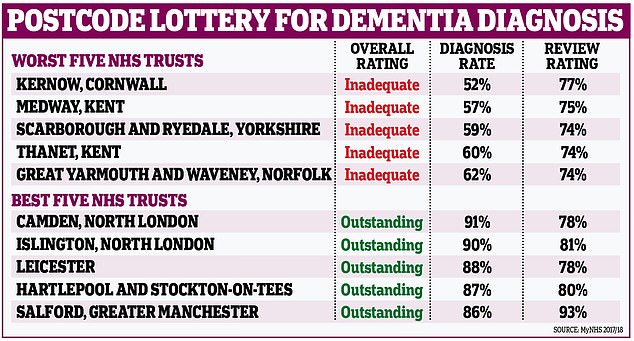 A Mail analysis of the data shows that 47 per cent of NHS England’s clinical commissioning groups (CCGs) were rated ‘inadequate’ or ‘requires improvement’ for dementia care last year.

On average, 30 per cent of patients with dementia in each area had not been officially diagnosed. This leaves them in the dark about why they are confused or suffering from memory problems, and they could be missing out on treatments.

NHS guidelines say that everyone diagnosed with dementia should have a face-to-face care review at least once a year, but the figures show that an average 22 per cent are seen less often.

Professor Clive Ballard, a dementia specialist at the University of Exeter, said: ‘In 2012 David Cameron made a commitment to tackling dementia. The current figures show no subsequent progress – it feels very much like these pledges have been kicked into the long grass.

It felt like no one believed I could have it 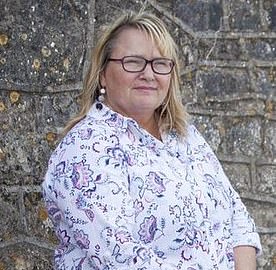 Tracey Lane, 52, was told by doctors for four years there was nothing wrong with her

When Tracey Lane started losing her memory, she knew it wasn’t down to simply ‘being forgetful’.

The school administrator, 52, found she could no longer recognise faces or remember names – and became increasingly confused.

But for four years doctors insisted there was nothing wrong with her.

‘At first I was told it could be depression, but the anti-depressants didn’t work,’ she said. ‘Then I was told it was most likely the menopause… but hormone replacement therapy also didn’t work.’

Even when she was referred to a neurologist, they told her it was probably just stress.

‘I felt like due to my age, nobody believed me,’ said Mrs Lane, who lives with husband Mike, 57, in Clevedon, Somerset. ‘I started to feel unreliable. This wasn’t just “forgetfulness”. I knew it wasn’t.’

Finally, in April last year, Mrs Lane, who has two adult sons, was diagnosed with dementia after a brain scan. She said: ‘In many ways when they finally told me I had dementia it was a relief – it was the not knowing that was the worst part.’

‘The Prime Minister’s promises translated to a short-term flirtation with dementia.’

There is also a stark postcode lottery, with best and worst diagnosis rates varying from 91 per cent in Camden, north London, to 52 per cent in Kernow, Cornwall.

The overall ratings were judged on multiple factors, including success rate at achieving annual reviews, which also showed major variations.

Fiona Carragher, of the Alzheimer’s Society, said: ‘It’s deeply worrying that the postcode lottery of care is continuing. People tell us they have to wait years for a diagnosis and have to fight the system to access support, advice and treatments. Some say their care plan is little more than a tick-box exercise.’

Separate figures show that at more than one in ten English hospitals, at least half of the carers for people with dementia did not agree that the standard of NHS care was ‘very good or excellent’.

At the worst-scoring hospital, St Mary’s on the Isle of Wight, just 8.7 per cent agreed.

NHS chiefs stress that they are meeting a national goal of diagnosing 67 per cent of patients.