Philip Hammond has ridiculed Boris Johnson and Jeremy Hunt for making multi-billion pound spending pledges as he claimed a No Deal Brexit would cost the Treasury £90billion.

The Chancellor said he was ‘not in favour of ad hoc spending commitments or tax cuts’ in a pointed rebuke to the two men battling it out for the keys to Downing Street.

Both Mr Johnson and Mr Hunt have made costly pledges during the race to succeed Theresa May and Mr Hammond today suggested doing so was irresponsible.

He also warned the £27billion of so-called ‘fiscal headroom’ – money set aside by the government to prop up the UK economy in a No Deal Brexit scenario – would not be enough to dampen the economic shock of Britain leaving the EU without an agreement.

The Chancellor signalled he would be willing to vote against a No Deal Brexit as he said: ‘It would be wrong for a British government to pursue No Deal as a policy and I believe it will be for the House of Commons, of which I will continue proudly to be a member, to ensure that doesn’t happen.’

Mr Hunt has promised to deliver a £13billion cut in corporation tax and provide the armed forces with a £12billion funding boost.

Meanwhile, Mr Johnson has pledged to cut income tax for higher earners at a cost of £9billion and also provide public sector workers with a pay rise.

Both men have said they would keep No Deal on the table if they become prime minister in order to make sure the UK leaves the EU by October 31.

But Mr Hammond told them a No Deal divorce would use up all of the money the government has saved for a rainy day, leaving the next PM with no cash to splash. 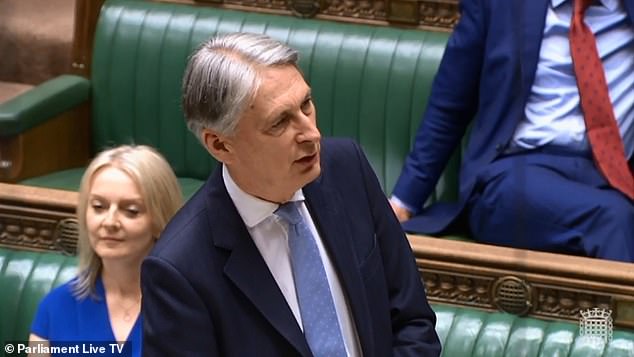 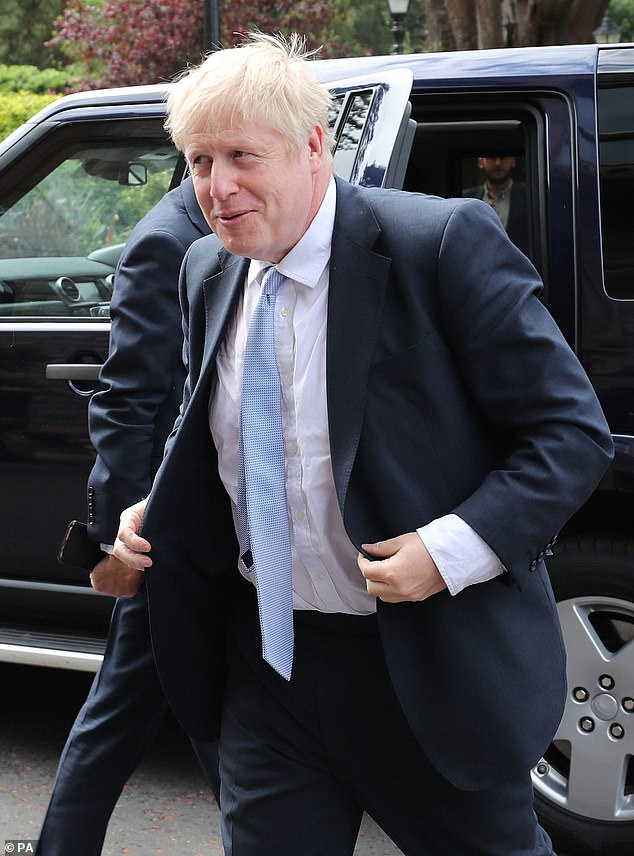 Speaking of the £27 billion pot of money, the Chancellor said: ‘I have no doubt whatsoever that in a No Deal exit we will need all of that money and more to respond to the immediate impacts of the disruption of a No Deal exit and that will mean there is no money available for longer term either tax cuts or spending increases.

‘But let me go further. The Government’s analysis suggests that in a disruptive No Deal exit there would be a hit to the Exchequer of about £90billion that will also have to be factored in to future spending and tax decisions.’

Meanwhile, Mr Hammond told MPs during Treasury questions in the House of Commons that a planned three-year spending review would be postponed until the next government is in place as he suggested Brexit uncertainty could result in the review only having a one year window.

He said: ‘I have consistently made the case and explained to this House that there is fiscal headroom within the current fiscal rules and if we have a smooth exit from the European Union through a transition that will remove the economic uncertainty that is hanging over our economy it will then be safe to release that headroom and make it available for additional public spending or at the choice of the next government reduce taxation.

‘Either way we have the headroom available once we have removed the Brexit uncertainty.’ 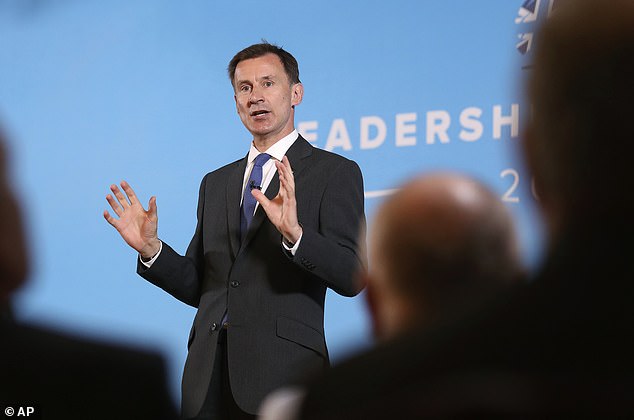 Jeremy Hunt, pictured addressing the leadership hustings event in Belfast, has promised to deliver a massive funding boost to the Ministry of Defence

‘That is the difficult business of government. That is why I am not in favour of ad hoc spending commitments or tax cuts commitments being made.’

Mr Hammond is expected to be replaced at Number 11 Downing Street regardless of who wins the Tory leadership contest.

The Chancellor appeared to have accepted his fate today as Chuka Umunna, the Lib Dem MP, asked him a question based on the assumption that he would still be in the job in October.

‘I have to say I think that is a highly unlikely scenario,’ Mr Hammond said with a grin.

Page Title: Premier League LIVE – Huddersfield vs Fulham score, team news and updates
Trump deploys extra 1,500 troops to the Middle East as tensions grow with Iran
McDonald's customer blasts chain for dangerous McFlurry allergy mix-up
Three quarters of people who live with a coronavirus sufferer may develop 'silent' immunity
MPs back Cooper and Letwin plan to stop No Deal and delay Brexit again in knife-edge 315-310 vote
Millionaire landlord, 71, who once banned 'coloured tenants' gets restraining order
Bird that lived 99 million years ago had a 'hyper-elongated third toe' LONGER than its lower legs
LORD BLUNKETT: I fear the Met's trying to cover up its mistakes over the 'VIP paedophiles' probe