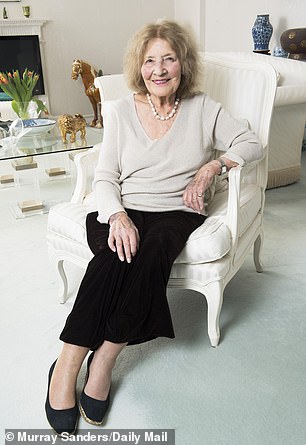 Sitting in her elegant apartment on Brighton seafront this week, Gabriella Skittar, now 91

She had just seen her father rounded up at gunpoint, along with all the other men in the village of Cappella di Scorze, near Venice. Like everyone else, Gabriella Skittar knew what was coming next.

The Germans had already massacred dozens of innocent civilians in nearby Bassano del Grappa — the standard reprisal for any show of armed resistance.

And now, the Italian partisans had just attacked a German column outside Cappella di Scorze.

Soon, all 38 menfolk would be lined up in front of a deep ditch, waiting for the German commanding officer to finish his lunch and give the order. Their only last, lingering hope was that their journey to the grave would be a swift one.

Except Gabriella had other ideas. Though just a teenager, she went to remonstrate with the Germans. Her years at school in Austria suddenly proved to be a godsend.

Astonished to be addressed in fluent German by an Italian girl, the German troops took her to see their officer, who listened to her protestations that the men were innocent.

Eventually, he took her to see them all lined up. Ordering Gabriella to translate into Italian, he told them: ‘This young lady tells me that you had nothing to do with the attack on us. I would like to believe that.’

At which point, an anti-tank gun appeared. ‘I want you to look at this gun,’ he said, before giving the command. It fired a round into a nearby cherry tree, blowing it to pieces.

‘If I find she has been lying to me,’ the officer shouted at his petrified audience, ‘she will be the first of you to die.’ Whereupon the troops began a systematic search of the prisoners.

Putting on a brave face, Gabriella stood her ground. But there was one fatal flaw in her story. For, as she very well knew, she was lying. Some of these men really were partisans.

If the Germans unearthed so much as an Italian armband, she and her father would go the same way as the cherry tree. The next half an hour would be the longest of her life . . .

Sitting in her elegant apartment on Brighton seafront this week, Gabriella, now 91, remembers it all as if it were yesterday. Yet this extraordinary tale of heroism and sheer good luck was to remain unknown for almost 75 years.

Now, despite having spent most of her life in Britain, Gabriella finds herself feted as an Italian national hero, with one of the highest honours her mother country can bestow.

And I am captivated as I listen to her inspirational story.

It is one that takes us from war-torn Venice and the execution of Italian dictator Benito Mussolini, to the stage of Glyndebourne Opera House.

But it all centres on the morning of April 28, 1945, as Allied forces moved northwards through Italy.

Gabriella and her family were relative newcomers to Cappella di Scorze. Before the war, they had lived near Venice, where her father, Luigi Skittar, was a senior figure in the management of Italy’s railway network.

For four years, he was posted to Innsbruck in Austria, where Gabriella attended an international school, becoming fluent in German and learning English. 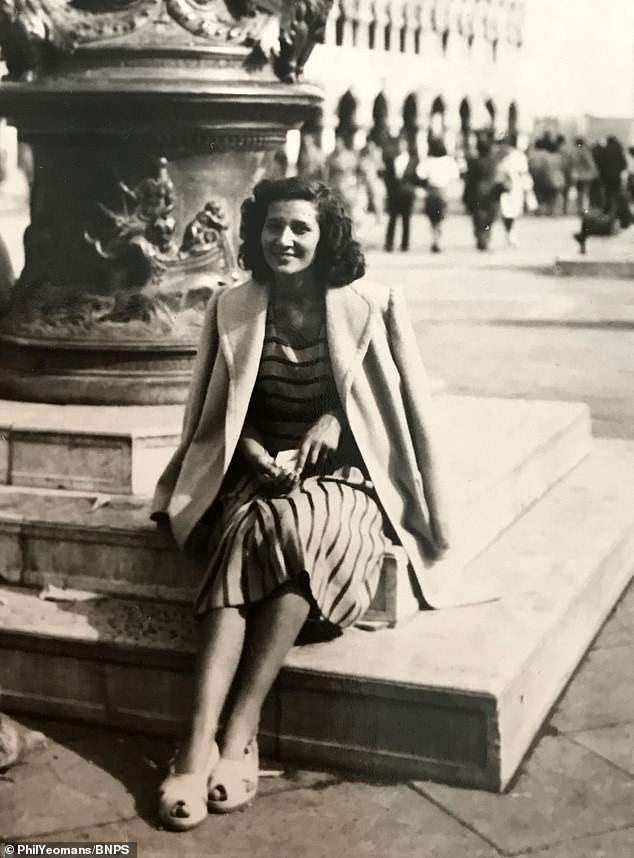 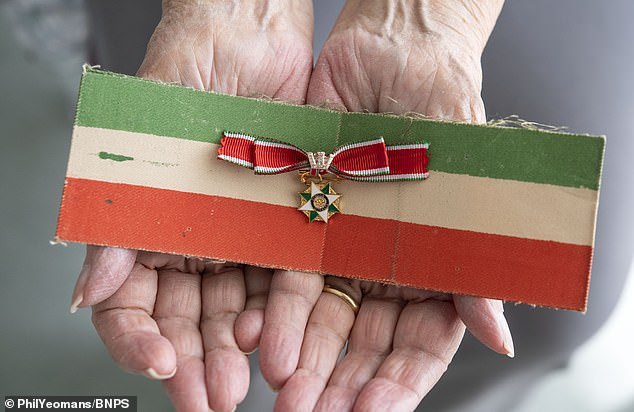 Gabriella was informed that the Italian President wished to elevate her to the rank of Officer of the Order of the Star of Italy, one of the country’s highest accolades, with the letters ‘OSI’ after her name

In 1943, the family returned to Italy, but Luigi feared exposing his family to Allied bombing raids on industrial targets around Venice. So he moved his wife and children to the countryside.

At first, they lived in Mogliano, until that, too, was bombed and he found them digs with a farming family in Cappella di Scorze.

Luigi would never have ended up facing a firing squad but for the fact that April 28 was his birthday. He decided to leave the city to spend a couple of days with his wife, Laura, and children, Gabriella, then 17, and son Lucio, seven.

By chance, his arrival coincided with that of a retreating German column which had just stopped in the village.

‘This was my father’s birthday, and we had looked forward to celebrating it, but, at 10am, a young man arrived on a bicycle,’ says Gabriella.

‘He told everyone to get indoors and close their shutters, since the partisans were about to attack the Germans.

‘We all pleaded for restraint. The Germans had executed 31 men in Bassano del Grappa, so we had no doubt of the German appetite for revenge.

‘But the attack went ahead, and several German soldiers were wounded.’

Not long afterwards, two German soldiers broke into the farmhouse with machine guns.

‘They just grabbed my father and every male over 14 years old and took them to some nearby stables,’ says Gabriella. ‘My mother wouldn’t let go of me, but I said: “I’m going to see where they are putting Daddy,” and I ran up the road.’

There, fearlessly, she demanded an explanation from the troops.

‘Confused by my perfect German, the soldiers took me to their commanding officer, who was having lunch,’ she says.

‘He made me stand and wait while he finished his meal. He was very tired, with the look of a defeated man.

‘For nearly two hours, I pleaded with him, insisting that the men were innocent bystanders — simple farmers who had nothing to do with the attack, which had been carried out by partisans from outside the village.’

But the officer was not so easily convinced. ‘Why did the villagers all go inside and close their shutters before we were attacked?’ he wanted to know.

Quick as a flash, Gabriella replied that it was merely the custom among Italian country dwellers to shut one’s shutters after the morning clean, in order to keep out the sun.

‘You are just a girl,’ he told her. ‘How can you know what’s in men’s hearts and souls?’

Gabriella was adamant: ‘They are innocent, not partisans.’

Finally, the commanding officer left the room for a few minutes. Then he returned and ordered her to follow him outside, where she found all the men in front of the ditch with machine guns trained on them.

She managed a brief word with her father, who fumbled in his pocket and gave her his watch, along with a hastily scribbled note to her mother.

She remembers the ‘terrific noise’ of the anti-tank gun pulverising the cherry tree before the troops began their search. ‘It was very, very tense,’ recalls Gabriella.

‘They were looking for any signs of partisan membership. Luckily, while in the cowshed, those who did have tricolour armbands, or the like, had had the sense to hide them in the dung on the floor. No incriminating evidence was found.’

Finally, the officer issued the order for the machine gunners to stand down and warned the villagers that if there was any further attack on his men, then he would have no hesitation in massacring the lot of them.

Finally, he said: ‘You have this young lady to thank for your lives.’

Gabriella remembers that most of the men still had their eyes screwed shut, waiting for a bullet.

‘Then my father put his arm around me and said: “Let’s go back to Mama.” ’

The villagers remained indoors as night fell and, in the early hours, the Germans moved off. Not long after, there was the sound of another engine and a light outside.

‘We were all still in shock. But one of the sons of the house got very nervous and said: “Those fools will get us all bombed with that light on.” He went outside, only to discover a British officer and his sergeant asking if anyone knew where they might find some breakfast.

‘I can’t tell you how astonished we were to hear English. We were being liberated!’ she says.

The entire village was only too happy to serve up its meagre rations as dawn broke.

‘It was very funny. As news spread, the whole village came out to watch these men just eating their breakfast. People were getting out the wine they had been hiding from the Germans. It was wonderful.’

Hours later, the news came through that Mussolini had been found strung up at a Milanese petrol station. ‘We were not sorry,’ laughs Gabriella.

Within days, the war was over and the Skittars moved back to Venice. Gabriella got a job with the British military authorities in Venice, where she met a British officer, Captain Peter Ezra, who had fought his way across the desert and up through Italy.

Romance ensued and, in 1949, they married and began a new life in Sussex.

Peter, who had represented Cambridge University in both cricket and boxing, taught at Sussex University while also playing and coaching at Sussex County Cricket Club.

Gabriella became a linguistics expert at Glyndebourne, teaching generations of opera singers how to sing properly in Italian and German. They had two children, Diana, who is now an entrepreneur, and Mark, the feature film producer. Finally, around 20 years ago, during a holiday in Italy, Gabriella decided ‘on a whim’ to pay a visit to Cappella di Scorze. No sooner had she walked into the place with her daughter, than a cry went up: ‘It’s Gabriella!’

‘Work stopped for the day as the whole village threw me an impromptu feast,’ she says.

Some years later, Mark read about an Italian woman receiving an award for something similar and decided that his mother deserved recognition, too.

Just over a year ago, he wrote to the Italian Embassy in London. Many months later, Gabriella was informed that the Italian President wished to elevate her to the rank of Officer of the Order of the Star of Italy, one of the country’s highest accolades, with the letters ‘OSI’ after her name.

Hence her appearance as guest of honour at the Italian Embassy, lauded for her bravery and quick-thinking as a teenager.

‘I never expected a reward,’ she says. ‘I was simply happy to have saved all those lives.’

Endearingly astonished by all the interest in her story, she says she has one bit of unfinished business. ‘I want to send some money to the people we lived with. They didn’t have much. But they were such good, honest people.’

Pictured: British man who vanished after taking a jet ski out to sea in Tenerife
World's coldest city hits temperature of 89F - sending locals to sunbathe on a GLACIER
Parents protest after primary schools BAN packed lunches in bid to cut down on single-use plastic
The best and worst of the Logies
Headteacher says social distancing in schools is simply impossible
Mane attraction: Flock of shaggy horses that prove you don't need a blow-dry to have a good mare day
Parents urged to stop using euphemisms like 'front bottom' with their daughters
Ali Oetjen shocks Fitzy and Wippa with response to Bachelorette question