Campaigners trying to block Heathrow expansion today won a Court of Appeal challenge against controversial plans for a third runway – prompting the airport to announce an appeal to the Supreme Court.

A group of councils in London affected by the expansion, environmental charities including Greenpeace, Friends Of The Earth and Plan B, and London Mayor Sadiq Khan, brought legal action over the Government’s approval of the plans.

Lords Justice Lindblom, Singh and Haddon-Cave said the Government failed to take account of its commitment to the Paris Agreement on climate change when setting out its support for the airport expansion in its National Policy Statement (NPS).

Boris Johnson could use the ruling to abandon the government’s support for the project. Alternatively, ministers could back Heathrow’s appeal or draw up new plans that take into account the judges’ concerns about the runway’s environmental impact. 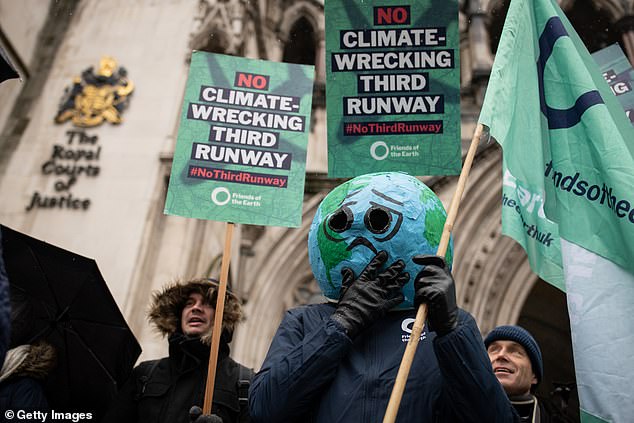 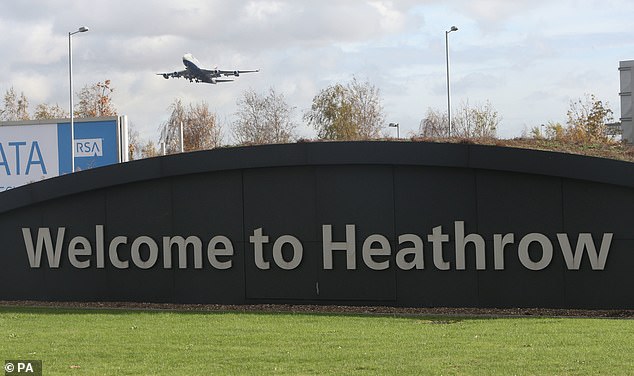 Lords Justice Lindblom, Singh and Haddon-Cave said the Government did not take enough account of its commitment to the Paris Agreement when supporting the runway at Heathrow (pictured)

The UN’s Paris Agreement, which came into force in November 2016, commits signatories to tackling climate change by taking measures to limit global warming to well below 2C.

In a summary of the ruling, Lord Justice Lindblom told a packed court: ‘The Paris Agreement ought to have been taken into account by the Secretary of State in the preparation of the NPS and an explanation given as to how it was taken into account, but it was not.’

The judge said that, having seen the decision in advance, the Government did not oppose a declaration that the NPS was unlawful and had not sought permission to appeal to the Supreme Court.

Clarifying the meaning of the ruling, Lord Justice Lindblom added: ‘Our decision should be properly understood.

‘We have not decided, and could not decide, that there will be no third runway at Heathrow.

‘We have not found that a national policy statement supporting this project is necessarily incompatible with the United Kingdom’s commitment to reducing carbon emissions and mitigating climate change under the Paris Agreement, or with any other policy the Government may adopt or international obligation it may undertake.

‘The consequence of our decision is that the Government will now have the opportunity to reconsider the NPS in accordance with the clear statutory requirements that Parliament has imposed.’

Lawyers for the campaigners told the court at a hearing in October, when considering the proposals, that then-transport secretary Chris Grayling did not take enough account of environmental legislation or of climate change issues.

Mr Johnson opposed the expansion of the west London airport when he was London’s mayor and promised to ‘lie down … in front of those bulldozers’ to stop the runway being built.

Earlier this month, he said there was ‘no immediate prospect’ of construction beginning.

The coalition of councils, environmental campaigners and Mr Khan appealed against a High Court ruling in May, which rejected four separate judicial reviews of the Government’s decision to approve the plans.

They argued that the Government’s NPS setting out its support for the project failed to properly deal with the impact on air quality, climate change, noise and congestion.

Support from Labour MPs helped push through the proposals to expand Europe’s busiest airport with an overwhelming majority of 296 in a Commons vote in June last year.

Mr Grayling said at the time that the new runway would set a ‘clear path to our future as a global nation in the post-Brexit world’. 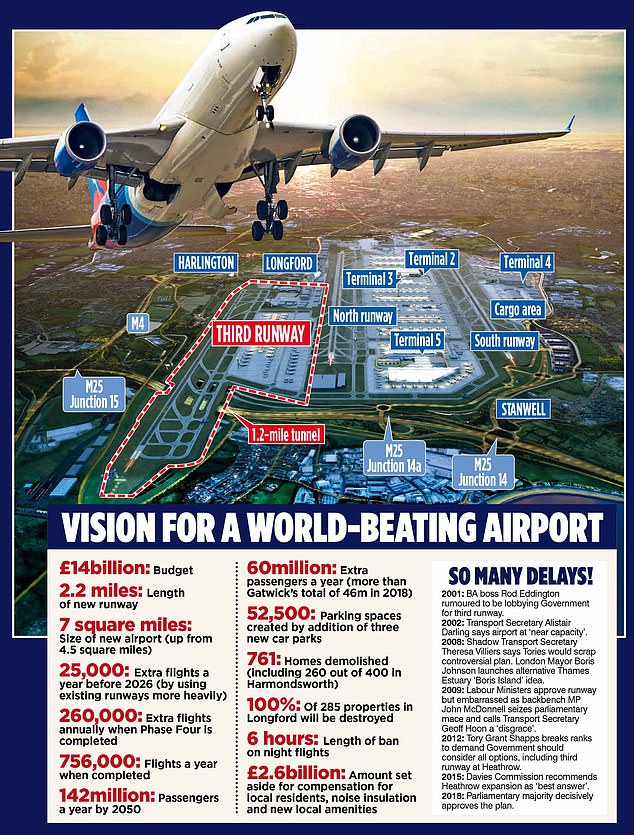 Pictured are plans for what the third runway was due to look like, although the plans are now in jeopardy 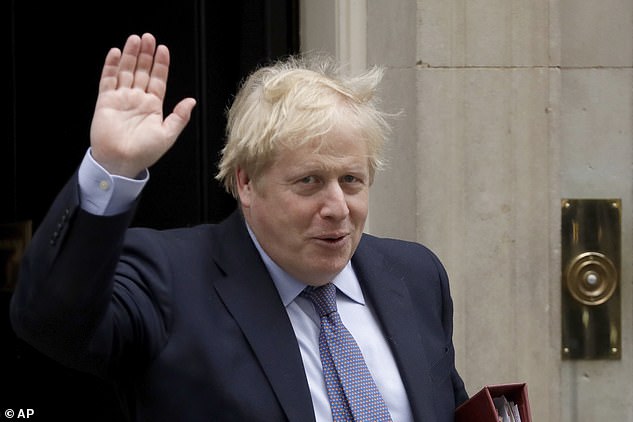 The airport said the delay was due to the Civil Aviation Authority, which refused to approve its bid to nearly quadruple the amount it spends before obtaining final planning permission.

Campaigners gathered outside court before the ruling, from 9am.

Mayor of London Sadiq Khan, who supported the legal action, welcomed the decision.

He said: ‘We won! Today we blocked the Tory government plans to build a third runway at Heathrow Airport. Today’s judgment is a major victory for all Londoners who are passionate about tackling the climate emergency and cleaning up our air.’

‘The third runway is already on its knees over costs, noise, air pollution, habitat loss and lack of access, and now Heathrow Ltd has yet another impossibly high hurdle to clear.

‘No amount of spin from Heathrow’s PR machine can obscure the carbon logic of a new runway. Their plans would pollute as much as a small country.

‘Boris Johnson should now put Heathrow out of its misery and cancel the third runway once and for all. No ifs, no buts, no lies, no U-turns.’ 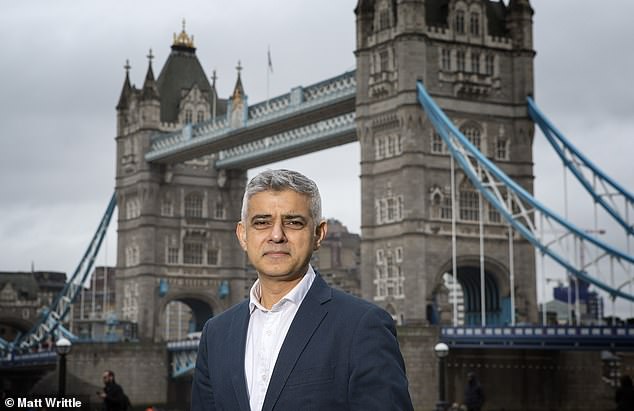 Mayor of London Sadiq Khan, who supported the legal action, welcomed the decision

‘In presenting plans for a third runway to MPs, the Government failed, the court has found, to assess whether this was compatible with the Paris Agreement.

‘The project would increase emissions at the UK’s biggest airport, and the UK has since legislated to achieve net zero emissions by 2050, so it’s very hard to see how the Government could now ever demonstrate that a third runway could be reconciled with the necessary scale of climate action.

‘This ruling should mark the end of plans for any new runways in the UK. The Government should stand up to the airports lobby, drop its support for airport expansion, and invest instead in low-carbon transport and supporting British tourism.’

Gareth Roberts, leader of Richmond Council, said: ‘This judgment is nothing short of a victory. It leaves the Government’s airports policy in tatters. It surely must be the final nail in the coffin for Heathrow’s attempts to steamroll over local and national opposition to their disastrous third runway plans.

‘The expansion of Heathrow would be catastrophe for our climate and environment and for the thousands of Londoners who would be forced to live with the huge disruption it will cause.

‘If the Government wants to pursue its plans for Heathrow expansion, it must now go back and revisit its own airports policy.

‘Rather than the Government attempting to battle on, I hope that they will now take a minute and realise that the only way forward is for them to focus their efforts into developing a sustainable transport policy that puts the health of residents and the environment front and centre of a proposal.’

Will Rundle, head of legal at Friends of the Earth, said: ‘This ruling is an absolutely ground-breaking result for climate justice.

‘We were fighting a project that would have had dire implications for present and future generations.

‘We are delighted with the Court of Appeal’s ruling, which goes to show the massive importance of the legal system to check the clear abuse of state power by Government, such as in this case.

‘Shockingly, this case revealed that the Government accepted legal advice that it should not consider the Paris Agreement when giving the third runway the go-ahead. The court has said very clearly that was illegal.

‘This judgment has exciting wider implications for keeping climate change at the heart of all planning decisions.

‘It’s time for developers and public authorities to be held to account when it comes to the climate impact of their damaging developments.’

Environment minister Lord Zac Goldsmith, who lost his seat as MP for Richmond Park in the election last year before being made a peer, simply tweeted: ‘HUGE!!!’

‘The Sir Howard Davies Airports Commission spent several years looking at airport capacity in the South East and was clear Heathrow is the only game in town, with other schemes being considered and ultimately rejected.

‘The economic prize is enormous if expansion is done right, with airlines ready to respond to the unlocking of new capacity by creating new routes and helping to connect the UK to new markets and destinations, and Heathrow to regions across the country.

‘UK aviation has committed to net zero carbon by 2050 and this factors in the emissions created by Heathrow expansion. It is not a question of being pro-aviation or pro-environment.’

Tanya Steele, chief executive of the WWF, said: ‘This is a victory for the climate and for future generations who will have to live with the impacts of environmentally catastrophic infrastructure projects.

‘No plan for net zero emissions, either from the UK Government or from Heathrow itself, can be credible if it includes a third runway.’

Speaking outside the Royal Courts of Justice, John McDonnell said the Court of Appeal’s judgment was a ‘tremendous victory’ for campaigners.

He added: ‘There’s no way we can tackle climate change and allow Heathrow expansion to go ahead. I think that project is now dead.’