The UK will be battered by more than a month’s worth of rain is just one day tomorrow with forecasters expecting a three-inch deluge combined with 40mph winds.

A weather warning has been put in place by the Met Office for south-west England, Wales and parts of the north, where downpours are ‘expected to become widespread and heavy at times’ throughout Friday.

The Met Office added that travelling on roads and railways during the afternoon and the evening rush hour could be treacherous for commuters, with difficult driving conditions expected on major routes.

Tomorrow’s miserable forecast comes just after it was revealed that a heatwave could arrive in the UK in time for the August Bank Holiday weekend thanks to ripples from a tropical typhoon developing over Asia.

Storm Krosa is currently spinning over the Pacific Ocean and will soon hit the jet stream over Japan, eventually bringing high pressure to Britain that could bring an abrupt end to recent thunderstorms and downpours.

It means families across the country are likely to enjoy beautiful hot weather during the final Bank Holiday weekend of the year on August 26 after a month of washouts and floods for many areas. 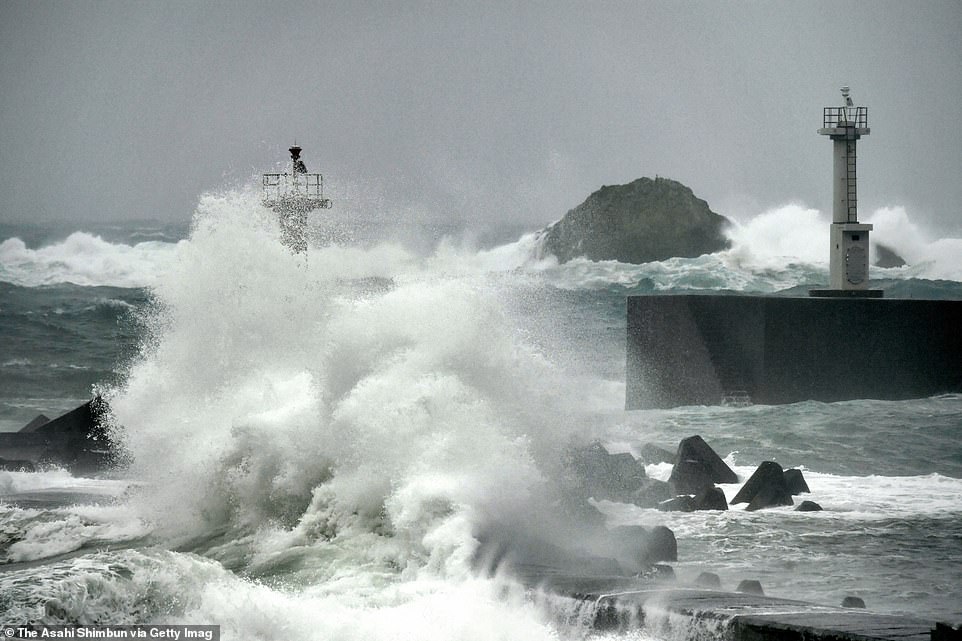 HIgh waves hit a pier as Typhoon Krosa approaches Japan. Krosa has forced the cancellation of a string of events marking the end of World War II around Kyushu today 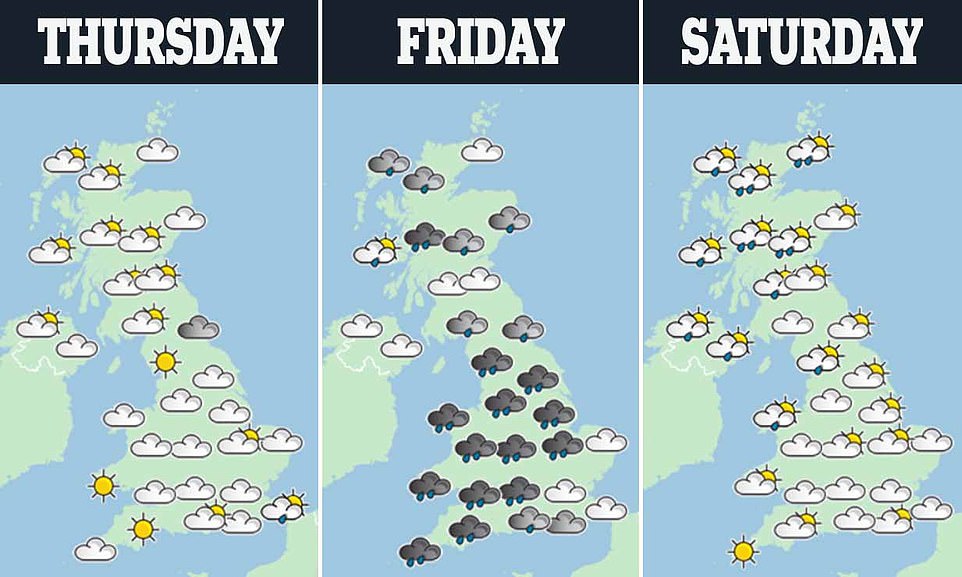 Weather experts also predict a washout this weekend, with up to 1.6in (40mm) of rain again in some areas and more thunderstorms across the UK. The average rainfall for England in August is only 2.72in (69mm)

The Met Office said high pressure would ‘increasingly dominate the weather across the British Isles’ towards the end of the month, with ‘longer spells of dry and sunny weather’ and temperatures above average for August.

Channel 4 weatherman Liam Dutton shared a graphic on Twitter showing the storm developing near east Asia, along with the caption: ‘A look at how a typhoon may bring summer weather back to the UK in around 10 days.’

However the recent wet weather is expected to continue in the short run, with forecasters predicting rain, high winds and coastal gales for Friday.

Weather experts also predict a washout this weekend, with up to 1.6in (40mm) of rain again in some areas and more thunderstorms across the UK. The average rainfall for England in August is only 2.72in (69mm).

However, by the middle of next week parts of the UK, particularly in the South of England and Wales, are expected to see a return to the warmer conditions experienced last month.

Met Office meteorologist Emma Smith said: ‘There’s a chance the weather at the weekend could be quite disruptive, much like the one just gone.

‘On Friday we could see wet and windy weather with further outbreaks of rain and coastal gales into the weekend. There should be some sun and showers on Saturday, but with a risk of thunder across the country.

‘The warnings we have for Saturday are for 30 to 40mm of rain in the North and Wales. This unsettled weather is due to the jet stream in the Atlantic filtering low pressure towards us.

‘By Tuesday and Wednesday next week we should see things settle down and western England and Wales should see some better weather.

‘High pressure is due to build in the south by the end of the month and we should be heading back to more seasonable weather conditions particularly in the South East.

‘Wednesday morning, an area of low pressure will move in from the South West with high winds and outbreaks of rain across the country.

‘The heaviest rain will be in northern England. While the rain will clear away on Thursday it will be followed by thunder.’