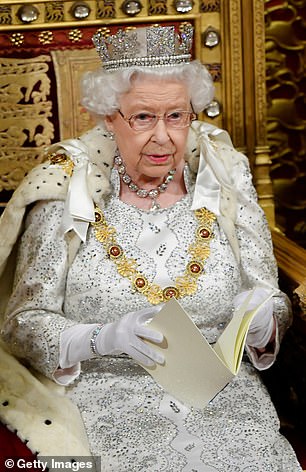 Peeved. That’s the word I’d use to describe the Queen at the State Opening of Parliament.

As she took her position in her gold-glistered throne in the House of Lords, there was a weariness to that regal glare that suggested she was not entirely happy to be there.

When MPs began filing in from the Commons, she issued a tired, wheezy sigh. I may be projecting, but it is quite possible the 93-year-old was fed up to the hind molars with the lot of them.

After all the hoo-ha these past three years over Brexit, who could blame her?

We got the pomp and we got the pageantry but it felt barely worth the effort.

There was a flatness about proceedings unbefitting of such an occasion. With a General Election round the corner, it all seemed rather meaningless.

Ten minutes is all it took the monarch to announce her government’s new legislative agenda – less time than it takes Prince Philip to barbecue a pork chop. 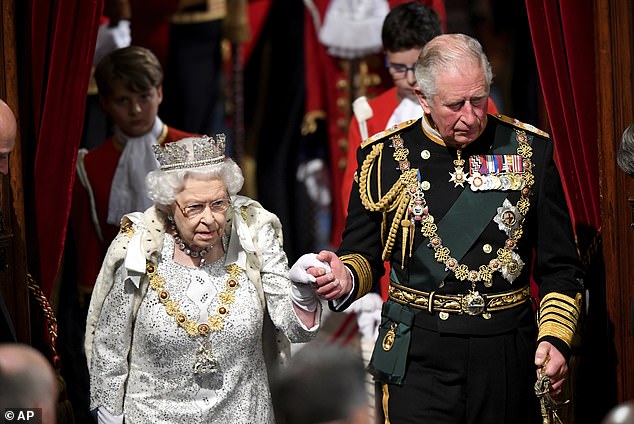 She rattled through her Prime Minister’s ambitious programme on crime, health and the environment with the élan of a maître d’ reeling off the chef’s specials.

Her Majesty had arrived in the Royal Carriage but chose not to wear the Imperial State Crown. Weighing just more than 2lb, it is too heavy for the royal head.

The Marquess of Cholmondeley, HM’s Lord Great Chamberlain, carried it ahead of her on a plumped-up cushion, his boyish face a study in careful concentration, as though disposing of a depth charge. With her husband now excused these events, she was accompanied by the Prince of Wales, whose chest bore enough military decoration to make Idi Amin in his prime blush. 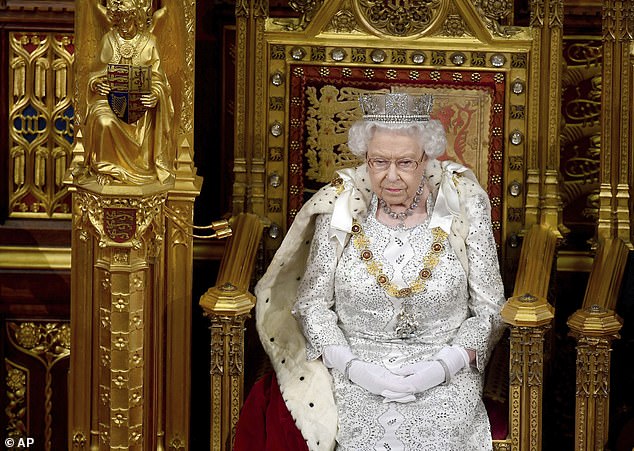 When MPs started filing in, she issued a tired, wheezy sigh and took a mere ten minutes to announce her government’s new legislative agenda

To his left sat Camilla, a vision in champagne silk and sparklier than the Milky Way. Amazingly, down on the red Lords benches, among the assorted cons, claret gurglers and quangocrats, there were empty spaces.

The happiest man in the place was Lord (Norman) Lamont who’d bagged himself a seat next to gaudy brassiere tycoon Lady (Michelle) Mone.

On the berths reserved for the law lords, Supreme Court President Lady Hale, wearing what looked like a squashed pirate hat but no sign of her Boris-taunting spider brooch, arrived earlier than the rest of her legal peers. Keen to attract the television cameras, perhaps. 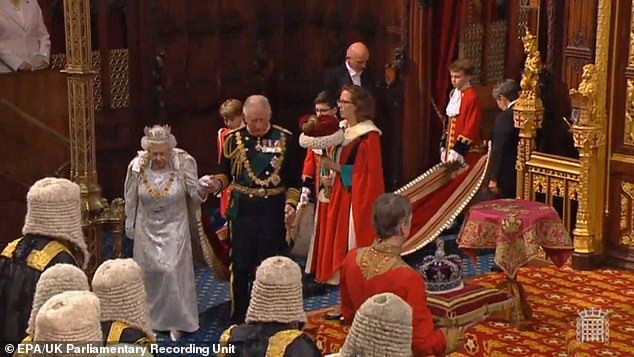 The Queen is offered the hand of Charles during the event at the House of Lords today where she rattled through her Prime Minister’s ambitious programme on crime, health and the environment with the élan of a maître d’ reeling off the chef’s specials 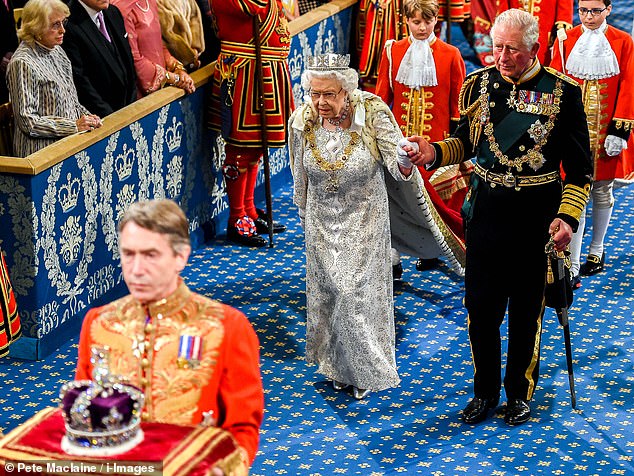 The Imperial State Crown, weighing just more than 2lb, is too heavy for the royal head and is carried in front of her during the State Opening of Parliament today (pictured)

Among the peers’ wives, the tiara count was high, even if some dresses were cut a trifle low.

I spotted one cleavage so heaving that it would not have been out of place among the burlesque beauties of Madame Jojos’s late, lamented venue in Soho.

Ex-business minister Greg Clark looked down over the chamber intently, possibly imagining himself sitting there one day, tip to toe in ermine. 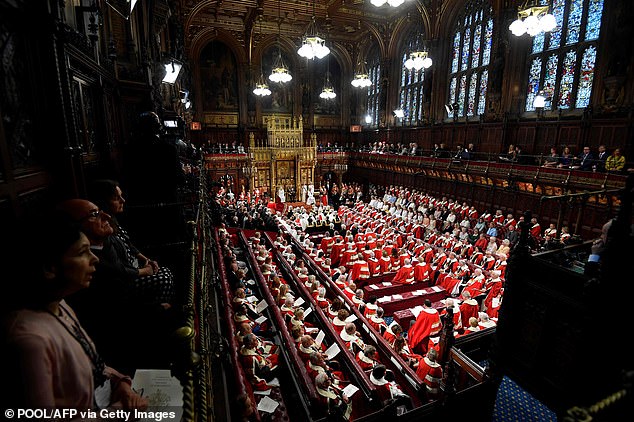 He reacted to Johnson’s advances as though he were a tramp sidling up to him outside Tesco begging for a match for his cigarette.

For his sins, transport minister Grant Shapps got lumbered with Theresa May. SNP leader Ian Blackford waddled on alone.

As we departed the Press Gallery just after midday, one of the men in tights scoffed: ‘See you all back here in a couple of months.’

Yes, election fever in very much in the air.

When the Commons met after lunch, we heard two festival speeches as is the custom, the first a charming effort from Lee Rowley (Con, NE Derbyshire). The second, from Sarah Newton (Con, Truro and Falmouth), was drippier than tinned peaches.

Both Corbyn and Johnson’s appearances at the dispatch box dragged on far too long. Corbyn’s speech a was a Castro-esque yawneroo, the dullest I’ve heard in the chamber.

He prattled on for more than 40 minutes to a clammy, disinterested audience, prompting a fidgety Boris to begin theatrically puffing out his cheeks and staring at his watch to try to chivvy him along.

The PM at least provoked laughs. He compared Corbyn to Janus, the two-faced Roman god, over his Brexit stance: ‘First he was opposed to No Deal. Now he seems opposed to any deal.’

He performed far better than Corbyn but it was certainly no day for gloating.

The full text of the Queen’s Speech to Parliament

My Lords and Members of the House of Commons.

My Ministers will work to implement new regimes for fisheries, agriculture and trade, seizing the opportunities that arise from leaving the European Union. An immigration bill, ending free movement, will lay the foundation for a fair, modern and global immigration system. My Government remains committed to ensuring that resident European citizens, who have built their lives in, and contributed so much to, the United Kingdom, have the right to remain. The bill will include measures that reinforce this commitment. Steps will be taken to provide certainty, stability and new opportunities for the financial services and legal sectors.

My Government’s new economic plan will be underpinned by a responsible fiscal strategy, investing in economic growth while maintaining the sustainability of the public finances.

Measures will be brought forward to support and strengthen the National Health Service, its workforce and resources, enabling it to deliver the highest quality care. New laws will be taken forward to help implement the National Health Service’s Long Term Plan in England, and to establish an independent body to investigate serious healthcare incidents.

My Government will bring forward proposals to reform adult social care in England to ensure dignity in old age. My Ministers will continue work to reform the Mental Health Act to improve respect for, and care of, those receiving treatment.

My Government is committed to addressing violent crime, and to strengthening public confidence in the criminal justice system. New sentencing laws will see that the most serious offenders spend longer in custody to reflect better the severity of their crimes. Measures will be introduced to improve the justice system’s response to foreign national offenders. My Government will work to improve safety and security in prisons and to strengthen the rehabilitation of offenders. Proposals will be brought forward to ensure that victims receive the support they need and the justice they deserve. Laws will be introduced to ensure that the parole system recognises the pain to victims and their families caused by offenders refusing to disclose information relating to their crimes.

A new duty will be placed on public sector bodies, ensuring they work together to address serious violence. Police officers will be provided with the protections they need to keep the population safe. They will also be awarded the power to arrest individuals who are wanted by trusted international partners.

My Government will bring forward measures to protect individuals, families and their homes. Legislation will transform the approach of the justice system and other agencies to victims of domestic abuse, and minimise the impact of divorce, particularly on children. My Ministers will continue to develop proposals to improve internet safety, and will bring forward laws to implement new building safety standards.

My Ministers will ensure that all young people have access to an excellent education, unlocking their full potential and preparing them for the world of work. My Government will take steps to make work fairer, introducing measures that will support those working hard. To help people plan for the future, measures will be brought forward to provide simpler oversight of pensions savings. To protect people’s savings for later life, new laws will provide greater powers to tackle irresponsible management of private pension schemes.

To ensure that the benefits of a prospering economy reach every corner of the United Kingdom, my Ministers will bring forward a National Infrastructure Strategy. This will set out a long-term vision to improve the nation’s digital, transport and energy infrastructure. New legislation will help accelerate the delivery of fast, reliable and secure broadband networks to millions of homes. An aviation bill will provide for the effective and efficient management of the United Kingdom’s airspace Air Traffic Management and Unmanned Aircraft Bill. Proposals on railway reform will be brought forward.

A white paper will be published to set out my Government’s ambitions for unleashing regional potential in England, and to enable decisions that affect local people to be made at a local level.

My Government is committed to establishing the United Kingdom as a world-leader in scientific capability and space technology. Increased investment in science will be complemented by the development of a new funding agency, a more open visa system, and an ambitious national space strategy.

My Ministers remain committed to protecting and improving the environment for future generations. For the first time, environmental principles will be enshrined in law. Measures will be introduced to improve air and water quality, tackle plastic pollution and restore habitats so plants and wildlife can thrive. Legislation will also create new legally-binding environmental improvement targets. A new, world-leading independent regulator will be established in statute to scrutinise environmental policy and law, investigate complaints and take enforcement action.

Proposals will also be brought forward to promote and protect the welfare of animals, including banning imports from trophy hunting.

My Government remains committed to working with all parties in Northern Ireland to support the return of devolved government and to address the legacy of the past.

My Government will take steps to protect the integrity of democracy and the electoral system in the United Kingdom.

My Government will continue to invest in our gallant Armed Forces. My Ministers will honour the Armed Forces Covenant and the NATO commitment to spend at least two per cent of national income on defence.

As the United Kingdom leaves the European Union, my Government will ensure that it continues to play a leading role in global affairs, defending its interests and promoting its values.

My Government will be at the forefront of efforts to solve the most complex international security issues. It will champion global free trade and work alongside international partners to solve the most pressing global challenges. It will prioritise tackling climate change and ensuring that all girls have access to twelve years of quality education.

Members of the House of Commons.

Estimates for the public services will be laid before you.

My Lords and Members of the House of Commons.

Other measures will be laid before you.

I pray that the blessing of Almighty God may rest upon your counsels.

Five women share their VERY personal experiences of the menopause in a hope to end the taboo
I'm A Celebrity: Rita Simons is the FOURTH campmate to be voted off
Sizzling Saturday! 'Tongue of fire' heatwave will boil Britain today
Rockets hit US coalition-base Camp Taji in Iraq days after British female Lance Corporal was killed
How YOU look fabulous at every age!
Thug, 30, who beat his pregnant girlfriend posted ‘upskirt’ photo of her genitals on Facebook
James Middleton and girlfriend Alizee Thevenet jog around St Barts
Man from Hereford scoops £71MILLION EuroMillions jackpot