Easter recess. A chance for Westminster to rinse itself down from the recent Brexit madness and restore some much-needed sanity. Well, it was a nice thought while it lasted.

Parliament Square is now more of a mess than ever. Like Glastonbury on the gloomy Monday after. Gone are the Brexit rabble- rousers and in come the ‘End is Nigh’ protesters from Extinction Rebellion.

It is not an angry scene. More a limp sort of vista, all Kumbaya and Kombucha. Speakers are polite, well-spoken but totally unreasonable. When I stepped off the Tube yesterday, excitable ginger ninny Lloyd Russell-Moyle (Lab – Brighton Kemptown) was calling for all taxis and cars to be ‘driven from the streets’.

Meanwhile, inside the Commons, Greta Thunberg, a 16-year-old climate change activist from Sweden, held court over opposition leaders, chiding them for their lack of action on the environment. 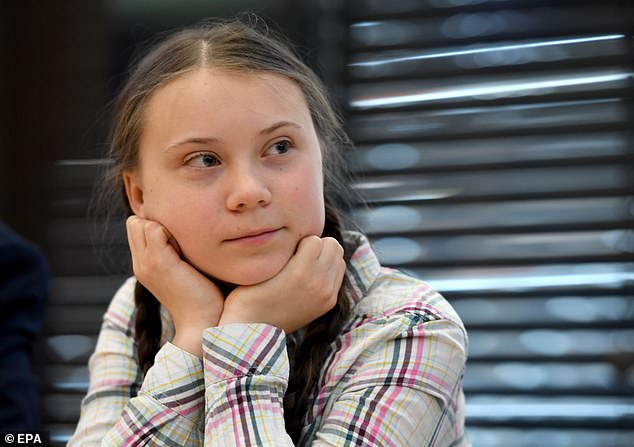 Swedish schoolgirl climate activist Greta Thunberg during an event inside the Houses of Parliament in Westminster, London

Members queued to pay homage to the pig-tailed wunderkind as though she were some all-powerful sorceress in Game of Thrones. All hail Queen Greta!

In the chamber, energy minister Claire Perry was summoned to answer an urgent question on the Parliament Square protestors.

Before she spoke, little Greta was ushered to a seat in the public gallery and given a welcome round of applause. As I say, it was a weird first day back.

The question had been brought by Ed Miliband (Lab – Doncaster North), himself an energy minister under Gordon Brown and who in another life one could imagine as one of those beardy NGO lentil-eaters who urge us to only take one shower a week.

Ed’s sympathies were firmly with the swampies. Easy for him to say, of course. His constituency lies way up north, far away from the chaos they had wrought on Londoners.

The Government, said Ed, needed to ‘raise their game’ on global warming. He quoted saintly Greta, calling on them to ‘act as if the house was on fire’. He also demanded the Government declare a ‘climate emergency’ whatever that meant. 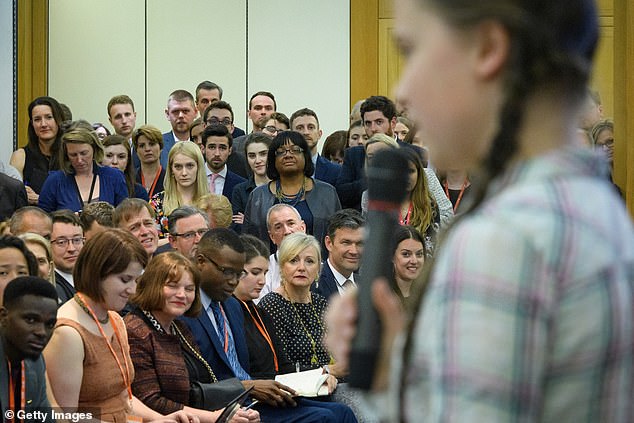 Ms Perry began by apologising for her failure to meet with Greta and her team, but other commitments and all that. ‘Her team?’ Yup, that’s what she said. I’m not sure even Lady Gaga boasts one of those.

The minister criticised the protesters’ methods but said like Ed she shared their concerns about the environment. Gesturing to Miliband, she said that before they became MPs, it might well have been the two of them out there waving the placards. Politely, no one pointed out that as a former hotshot banker at Credit Suisse, Perry might have been a tad conflicted.

Perry’s general message to the House was that there’s still lots to do on tackling climate change but that is not to say a lot has not already been achieved. Behind her, John Redwood (Con – Wokingham), James Gray (Con – North Wiltshire) and Sir Edward Leigh (Con – Gainsborough) flashed dubious scowls. Not perhaps the most dedicated trio of Tory tree-huggers. 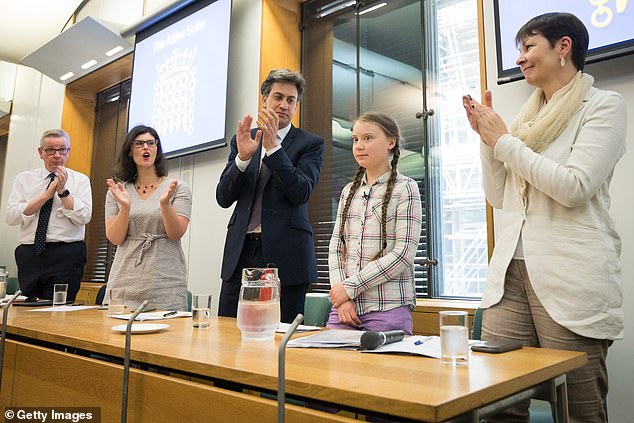 Swedish environmental campaigner Greta Thunberg receives applause after addressing politicians, media and guests within the Houses of Parliament on April 23, 2019 in London

Hyperactive Rebecca Pow (Con – Taunton Deane) made a suggestion about sustainability targets. My own suggestion to Perry: Find a way of bottling the energy zingy Pow emits in the chamber, and we’ll solve the energy crisis tomorrow.

When Caroline Lucas (Green – Brighton Pavilion) rose, she turned to the public to pay tribute to the environment’s pocket heroine but – oh no! – Greta by now had seen enough and scarpered. I didn’t blame her. Predictably, Lucas tried to make a petty issue out of the Prime Minister failing to find time to meet with Thunberg.

Back in Parliament Square, the light was starting to quell.

As the chants thinned to a reedy murmur, these polite – and suspiciously well-dressed – protesters began packing up to make the long journey home.

Or, as is more likely, the short hop across the park to their flats in Sloane Square.