Well it wasn’t Ali-Frazier mark two, that’s for sure. Probably barely even a bout worthy of Frank Bruno or Joe Bugner. Still, no doubts at all about who shaded the win.

Boris Johnson and Jeremy Corbyn went paw to paw last night in ITV’s election debate. While there was no decisive knock-out blow, the judges’ scorecards would have edged the Prime Minister on points.

It was an assured performance from Boris, his attack lines as slick and well-rehearsed as a cruise liner cabaret act. He had spent the past week being drilled by a granite-jawed yankee doodle called Brett O’Donnell. What a name! Even money says he was his high school’s quarterback and swanned around with cheerleaders on his arm.

Hunky Brett’s instructions were pretty clear: Keep badgering Corbyn on Brexit. For that reason alone the PM emerged the victor. Corbyn, meanwhile, came across tetchy and evasive. Dear me, the old boy looked worn out up there. It did not help that his spectacles were perched on his schnoz throughout at a wonky angle. It made him look mildly doddery.

The arena for last night’s bout was Media City in windy Salford, several acres of granite and glass that wouldn’t seem out of place on a university campus. It’s the kind of place where pointless strategy meetings are endlessly being held in things called ‘pods’ or (shudder) ‘break-out spaces’.

In the ‘spin room’, where we were kept just away from the main action, Labour’s Dawn Butler, and Tories Michael Gove and Dominic Raab were pushing their respective bosses’ cause. Skulking about was ITV’s wonderfully titled ‘Head of Studios’, Kevin Lygo, in a black polo neck and blazer.

Our hostess for the evening was Julie Etchingham, whose courtly sophistication recalls a young Julia Somerville.

Over the past few years, Etchingham has established herself as the doyenne of this format. No other broadcaster has quite managed to make TV debates work the way she has. Last night I felt she was a little too vinegary in her approach towards the two leaders, less Miss Jean Brodie than Nurse Ratched, the icier-than-chilled steel battleaxe from One Flew Over the Cuckoo’s Nest.

‘Thank you Mr Johnson!’ became the buzzphrase of the evening as time and again she admonished Boris as he overshot his answers. 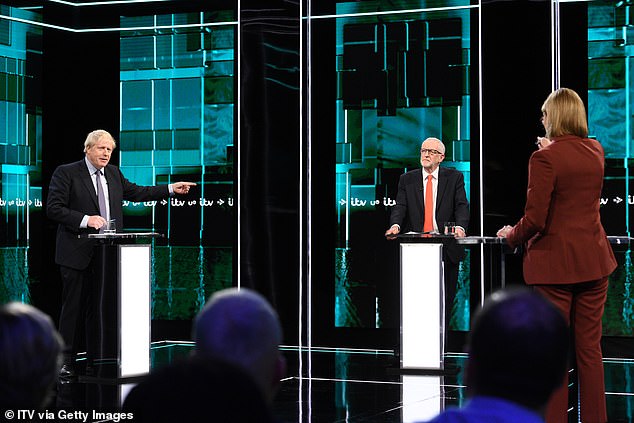 Well it wasn’t Ali-Frazier mark two, that’s for sure. Probably barely even a bout worthy of Frank Bruno or Joe Bugner

But that was far from the worst aspect of the coverage. Why, for example, was clapping allowed? Wastes far too much time. The set was also daft, one of those high-tech jobbies more suited to outré nightclubs overflowing with table dancing lovelies than a political debate. And so Boris and Jezza were positioned behind what resembled two giant lava lamps filled with white gloop. They looked like two confused codgers who’d been dropped into a game of space invaders.

Both leaders got to wow us with an opening monologues. Corbyn had won the toss and opted to go first and also, for reasons unknown, to stand on the right of the screen.

The poor bloke looked dreadful. The right eye had gone lazy and his voice was sandpapery, coarsened from weeks out on the stump. His preparation, he told reporters on the way in, was ‘a Caesar salad and some cups of tea’. A salty gargle would have done him more good.

Boris, meanwhile, wore a smart blue suit and shirt in dire need of some collar stiffeners. The ends were curling up like discarded maple leaves. His prep, by the way, was to spend the morning sparring in the gym. Very Rocky Balboa. Probably cracked a couple of eggs down his gullet for good measure.

First half of the debate was devoted to Brexit. Team Johnson were cock-a-hoop as Corbyn and Labour’s position remains a right old dog’s breakfast. Time and again Boris kept demanding to know what position Labour would take should they get to hold their second referendum. Corbyn dodged the question no fewer than nine times.

‘We have made our position very clear,’ said Corbyn at one point, provoking the audience to howl with laughter. Bullseye Boris.

Corbyn’s specs, incidentally, were now making a slow downward slalom down the bridge of his nose. Indeed, it’s safe to say he made a spectacle of himself. Next to Boris he simply looked zapped.

Not that the PM didn’t have some awkward moments. Worst for him came when Etchingham, wearing a pair of fetching tortoiseshells, asked him whether truth mattered. ‘I think it does,’ said Boris, provoking audience titters.

In the second half of the debate, Mr Corbyn probably had the better exchanges on the NHS, although there were further cackles about his plans for a four-day week.

When the pair were asked about global warming, Boris once again shamelessly blurted something about getting Brexit done. Corbyn chose to talk about the world’s poor. ‘Oh, here we go!’ groaned an audience member.

Drollest moment came when the pair were asked what Christmas gifts they’d give each other. Boris suggested giving Corbyn some of his homemade damson jam.

At this moment, Corbyn afforded himself a brief smile. It was the happiest he’d looked all evening. Is the allotment calling?

YouTube 19-year-old male beauty blogger James Charles and how he got famous
Qatari-controlled Islamic bank 'works with organisations linked to Islamists'
CNN sports presenter embroiled in furious court row with next-door neighbours over parking space
Fresh blow for Philip Green as his Topshop brands lose £505million after sales plunge
House prices in the UK up £2,000 in the first six months of 2019
Model David Gandy: People are getting their knickers in...
It would be sin under Islam to end life support for Tafida Raqeeb, her lawyer tells High Court
STEPHEN GLOVER: Never mind the vanishing tie - Rory Stewart would be a calamity for the Tories