Television star Su Pollard confronted Theresa May at a Downing Street drinks party and demanded that she speed up Brexit, The Mail on Sunday can reveal.

The 69-year-old comedy actress left No 10 aides speechless after putting two fingers in her mouth for her signature comedy whistle to get the Prime Minister’s attention at a reception held for Tory MPs and their spouses on Wednesday evening.

Ms Pollard, who shot to fame as holiday camp cleaner Peggy Ollerenshaw in the BBC series Hi-de-Hi! was a guest of maverick Essex MP Andrew Rosindell.

The pair have been close friends for more than a decade.

Breaking off a conversation with Energy Minister Claire Perry, Mrs May said: ‘Hello there, Su.’

The actress and singer shouted back: ‘Hi-di-hi, Theresa!’

Then the star, famous for her eccentric outfits and hairdos, proceeded to smack a kiss firmly on the cheek of Mrs May’s husband Philip, before grilling the pair on why Britain’s exit from the European Union was taking so long.

One MP present told this newspaper: ‘It was very surreal. She was clearly having a good old time, running around shouting “Hi-de-hi” at people.

‘Towards the end of the evening, she clearly decided that she had not had her moment with the boss so she just went straight for her.

‘The Prime Minister is not great at the small talk at the best of times, so it looked pretty painful. Su just kept saying “We want Brexit” and “What’s happening with Brexit, why is it taking so long?” and “We want Brexit now.”’

It was claimed that Ms Pollard, who was wearing rainbow ribbons in her hair, had earlier ‘planted a big smacker’ on Mr May’s cheek. 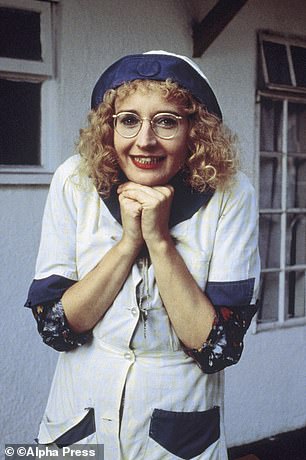 Another witness said Mr May, nicknamed the First Husband, was ‘left with a perfect red lipstick kiss on his right cheek’.

The Prime Minister had summoned her warring MPs for a drinks reception in a bid to mend stretch relations within the Conservative Party over Brexit.

Earlier in the evening, Ms Pollard was pictured posing for pictures with members of Mrs May’s crucial Ulster allies, the DUP.

Sharing a picture on Twitter, Mr Rosindell wrote: ‘A great time was had by all last night at No 10 for the PM’s New Year’s drinks and such a pleasure to take my dear friend Su Pollard with me.’

He added: ‘Let’s make it a great BREXIT year for Britain!’

But some Twitter users were left baffled by TV footage of Ms Pollard going through the famous door of No 10. One asked: ‘What next? Timmy Mallett Home Secretary?’

Number of GPs retiring before 60 hits a six-year low
UK concludes it can mitigate risk from Huawei equipment use in 5G
Hardline Brexiteers present Theresa May with terms for backing her Brexit deal
Cobbler who lost his thumb in a freak accident had his big toe amputated and sewn onto his hand
Canucks' Boeser beats Penguins with OT goal
Bus driver, 47, is killed just yards from his front door
Jeffrey Epstein's bodyguard claims he had 'help' killing himself
Pictured: Local farmer, 27, accused of murdering American biologist on Greek island