Hilarious footage has emerged of Star Wars‘ character Chewbacca speaking English to Han Solo during an outtake for The Empire Strikes Back.

Video shows Chewbacca, a Wookiee warrior who mumbled much of his dialogue and didn’t speak English, welding piping while scolding Harrison Ford‘s character Han Solo in his native London accent.

Peter Mayhew, the actor who played Han Solo’s hirsute and lovable sidekick, died of a heart attack aged 74 on Tuesday after suffering years of health complications due to his height. 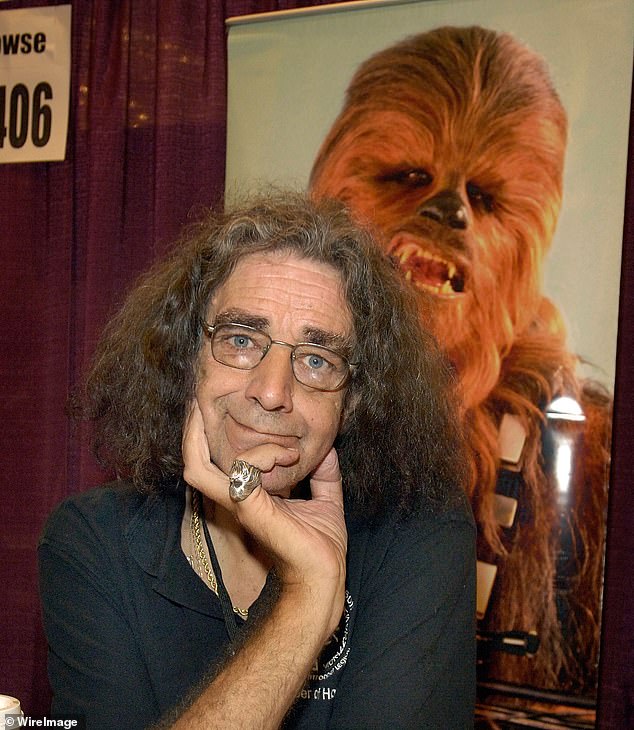 Peter Mayhew, the actor who played the character Chewbacca in Star Wars, died of a heart attack on Tuesday after suffering years of health complications due to his height

Fans around the world have been paying tribute to Mayhew as a day of celebration for the iconic film series, dubbed ‘May the fourth be with you’ takes place on Saturday.

Mayhew was born in Richmond-on-Thames in London 1944 and became a naturalized US citizen in 2005.

In the footage, Chewbacca tells Han Solo in his native Cockney accent: ‘Where the hell have you been?.’  Solo then replies: ‘Alright, don’t lose your temper, I’ll come right back and give you a hand.

Harrison Ford led the tributes to Mayhew at news of his passing, having last appeared on screen with him in 2015’s The Force Awakens.

He tweeted: ‘Peter Mayhew was a kind and gentle man, possessed of great dignity and noble character.

‘These aspects of his own personality, plus his wit and grace, he brought to Chewbacca. We were partners in film and friends in life for over 30 years and I loved him. 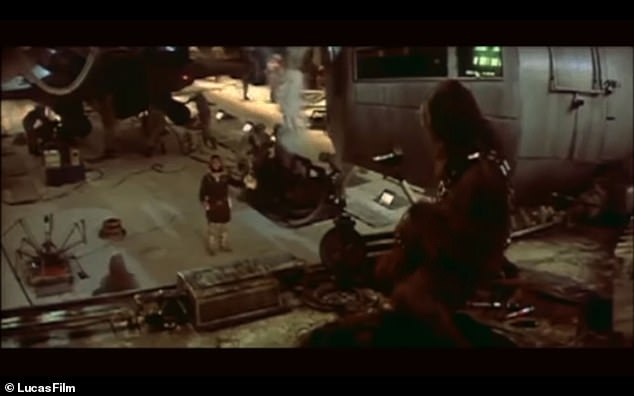 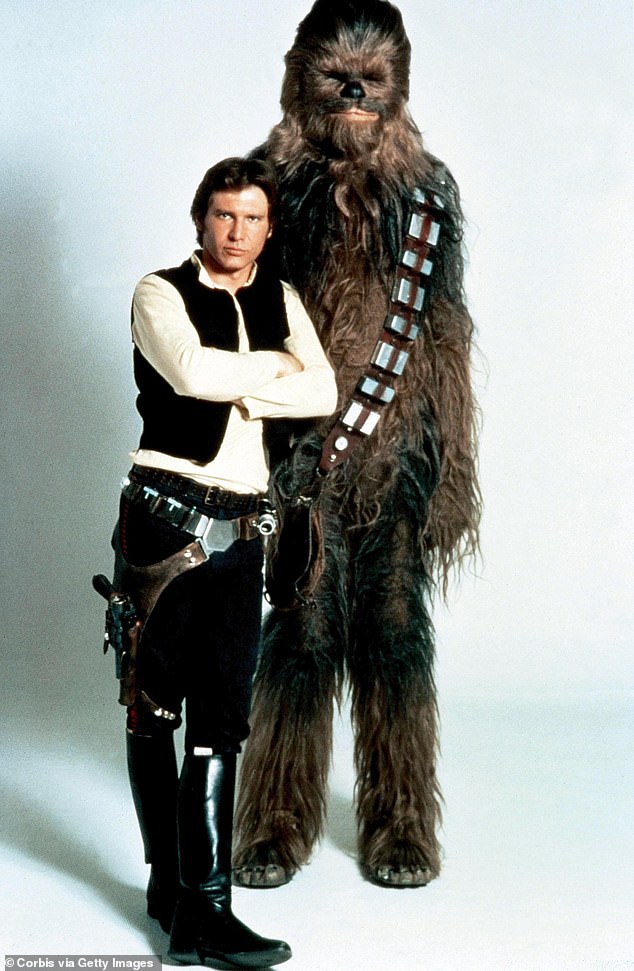 Chebacca, a Wookie from the planet Kashyyyk, was Han Solo’s hirsuit and lovable sidekick in the film franchise and starred in most of the franchise’s nine movies

He added: ‘He invested his soul in the character and brought great pleasure to the Star Wars audience.

‘Chewbacca was an important part of the success of the films we made together. He knew how important the fans of the franchise were to its continued success and he was devoted to them.’

Mark Hamill, who played Jedi hero Luke Skywalker in the franchise, also spoke out – praising Mayhew as ‘a big man with an even bigger heart’ and said that he was ‘forever grateful’ for the memories they had shared. 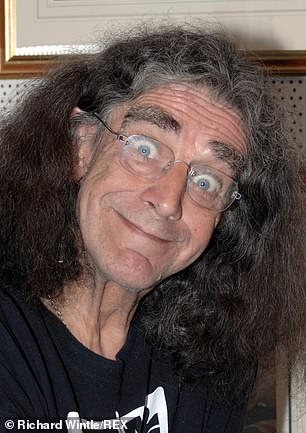 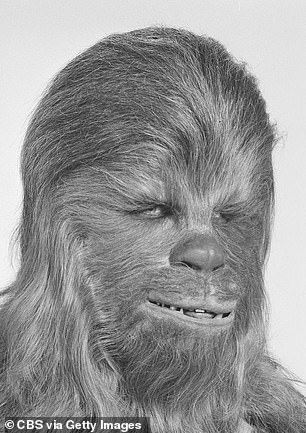 Mayhew, (pictured in 20017),  was a mainstay at Star Wars conventions around the world, including the bi-annual Star Wars Celebration, and he was heavily involved in the Make-A-Wish foundation. He is pictured in character in 1978, (right) 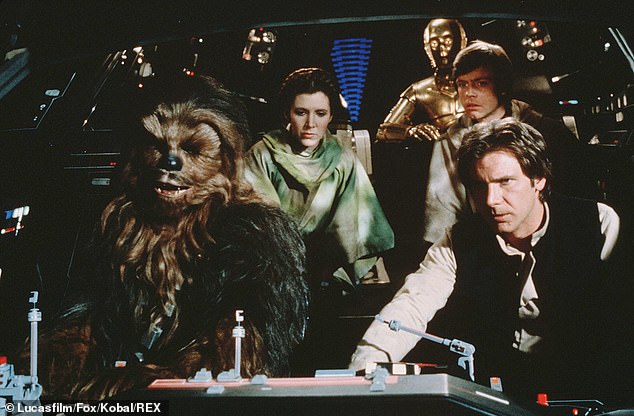 His costars and fans around the world paid tribute to him following his death last Tuesday. He is seen in character with actors Carrie Fisher, Anthony Daniels, Mark Hamill and Harrison Ford in a promotional shot Star Wars Episode Vi – Return Of The Jedi – 1983

Mayhew landed the role of the Wookie due to his towering 7ft 3ins frame.

He came to the attention of film casting agents by chance while working as an orderly at London’s King’s College Hospital when a reporter for a local newspaper took his photograph for an article about men with big feet in 1976.

Seeing the picture, producer Charles H. Schneer invited Mayhew to audition for a film he was working on – Sinbad And The Eye Of The Tiger – and he was cast as the Minoton, a robotic creature based on a Minotaur.

A short time later Mayhew was spotted by George Lucas who was looking for a large man to play the Wookie in his upcoming film, Star Wars. 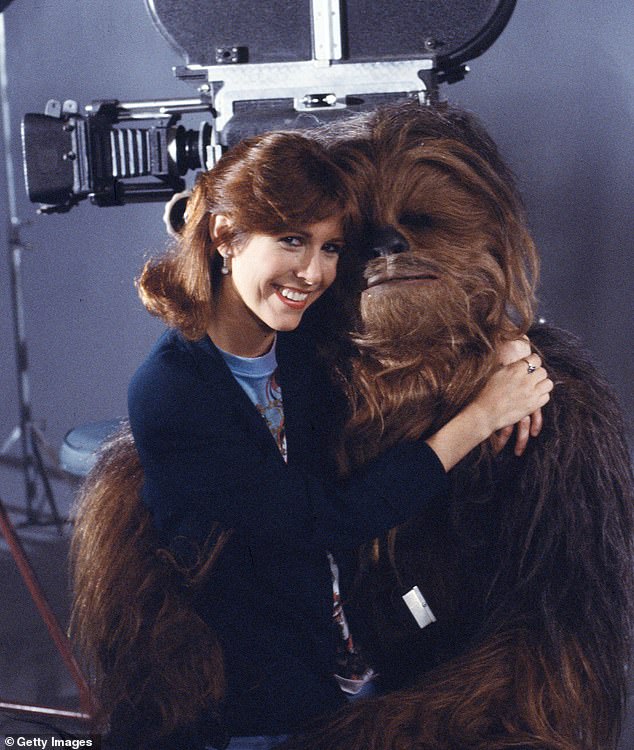 He is sen here in costume as Chewbacca in 1983 with American actress Carrie Fisher, who played the role of Princesss Leia and died of a sudden cardiac arrest in December 2016

Lucas had originally cast 6ft 6ins bodybuilder David Prowse in the role, but he ended up playing Darth Vader. Lucas was desperate for a taller actor for Chewbacca, and said all Mayhew had to do to get the part was ‘stand up’.

Star Wars: A New Hope was released in 1977 and became the highest-grossing film of all time.

It has been followed by another seven canonical films, with an eighth episode due this December, two standalone films, and has spawned TV series, video games and books.

Incredibly, Mayhew went back to his job at the hospital following the first Star Wars film and continued working there until Star Wars: Return of the Jedi, the third film in the original trilogy, was released in 1983. 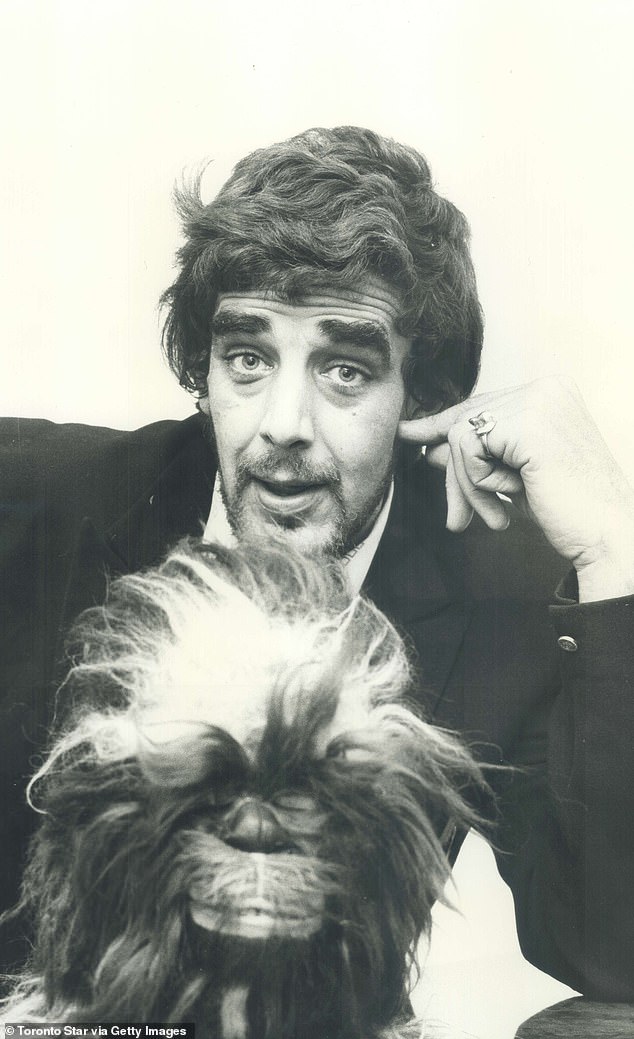 Mayhew portrayed Chewbacca in five films, most recently in 2015’s Star Wars: The Force Awakens. By that time Mayhew had been using a wheelchair because his extreme height had caused weakness in his bones

After that he quit and made his living off the character, giving speeches and appearing at fan conventions.

Mayhew would reprise the role twice more – in 2005 for Revenge Of The Sith and 2015 for The Force Awakens.

By the time Force Awakens was produced, Mayhew had been using a wheelchair because his extreme height had caused weakness in his bones.

Producers gave him a courtesy call to say they would be casting a new actor in the role but Mayhew, who had just undergone a double knee transplant, insisted he could make himself fit enough to play the role one more time.

He underwent a physical training regime for three hours a day, every day, for four months. That was enough to get him out of the wheelchair and he was able to reprise the role alongside Ford as Solo.

Joonas Suotamo was then brought in to take over the role of Chewbacca after The Force Awakens.