Hong Kong riot police faced off with protesters today just hours after a protester was shot and a man set on fire in some of worst violence in more than five months of pro-democracy demonstrations.

The 21-year-old student named only as Chow had a kidney and part of his liver removed to take out the bullet from his torso and remains in critical condition.

Meanwhile construction worker Leung Chi-cheung, 57, is still fighting for his life with second-degree burns to his chest and arms, the South China Morning Post reported.

Embattled leader Carrie Lam said on Monday the escalating violence would not make her bow and that demonstrators were now enemies of the people.

But despite her warning railway services and were closed for a second day, with long traffic jams building die to the blockades in the morning rush hour on Tuesday. 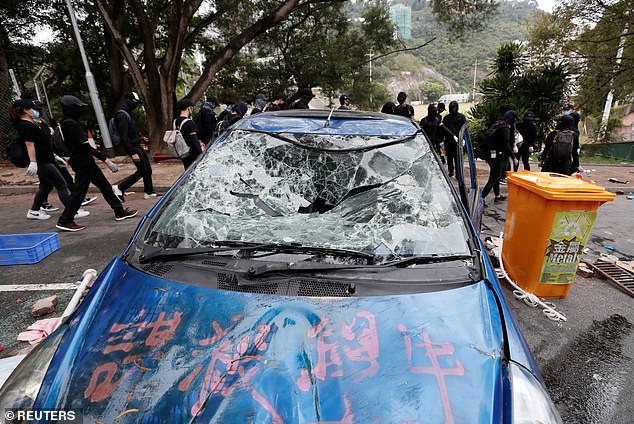 Some railway services were suspended and roads closed across the Asian financial hub, which has been plunged into its biggest political crisis in decades.

Riot police were deployed at metro stations across the territory and large queues were forming at railway platforms as commuters made their way to work.

Universities and schools cancelled classes, with students, teachers and parents on edge a day after police fired tear gas and students hurled petrol bombs on some campuses.

More than 260 people were arrested on Monday, police said, bringing the total number to more than 3,000 since the protests escalated in June. 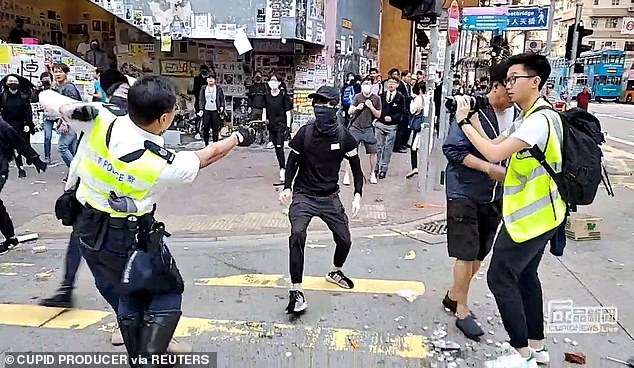 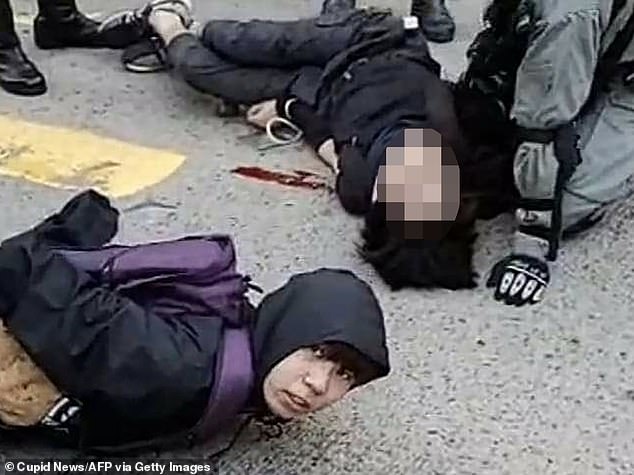 Police could later be seen detaining the two men on the ground. The first man (face blurred) had a pool of blood next to him, his body limp as officers moved him around and apparently tried to tie his hands, while the second man was conscious and talking 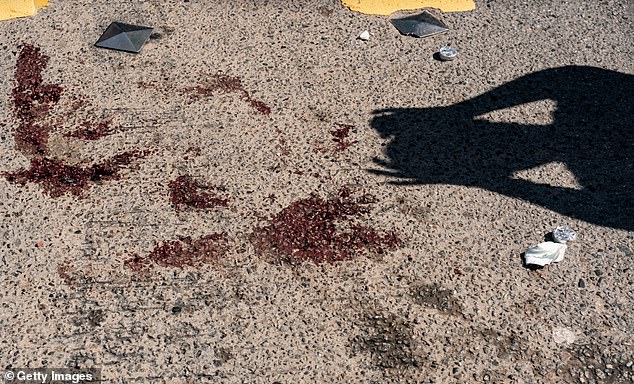 In footage broadcast live on Facebook, a Hong Kong policeman drew his weapon as he wrestled with a man at a blockaded road junction, with a second protester advancing towards them in a bid to help his comrade.

That second protester appeared to take a swipe at the officer’s pistol and just moments later the policeman opened fire at him, hitting him in the torso.

In a separate incident at Ma On Shan Plaza, horrific footage showed a man being doused in fuel and then lit on fire on a footbridge after telling protesters, ‘you are not Chinese’.

Joining angry crowds in Sai Wan Ho after the shooting, another woman said: ‘I don’t understand why the police has to use that kind of brutality to hurt innocent people. I think it’s just out of sense, out of control.’

As shrieks pierced the air after the shooting, other demonstrators rushed at the officer who appeared to fire further shots.

The masked demonstrator he had originally tried to arrest broke free in the struggle but a third man also went to ground as the shots were fired. 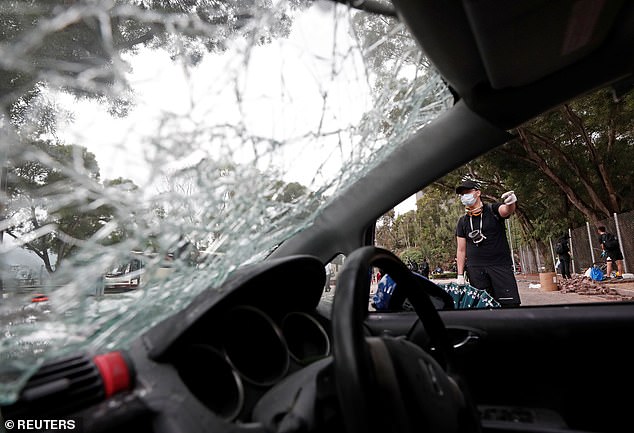 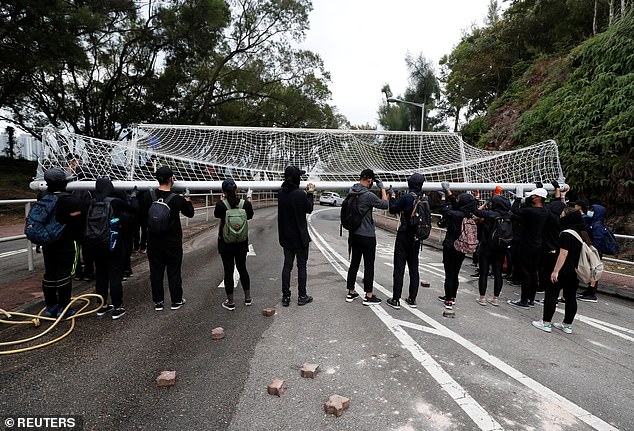 Police could later be seen detaining the two men on the ground. The man who was shot had a pool of blood next to him, his body limp and his eyes wide open as officers moved him around and tried to tie his hands. The second man was conscious and talking.

Police commander Patrick Kwok later said the protester had been trying to snatch the officer’s gun, according to Hong Kong media, adding that the student had been injured in the liver and kidney.

The rush-hour protests were a rare sign of working-hours violence following demonstrations over the weekend.

Officers first began using live rounds as warning shots in August and have previously shot an 18-year-old protester and a 14-year-old, both of whom survived.

On Monday demonstrators called the shooting ‘absolutely disproportionate’ and called for an ‘indefinite’ strike in protest at police tactics.

The policemen who shot the student protester has received death threats against his children after activists unlawfully leaked his personal information on the internet, police said. 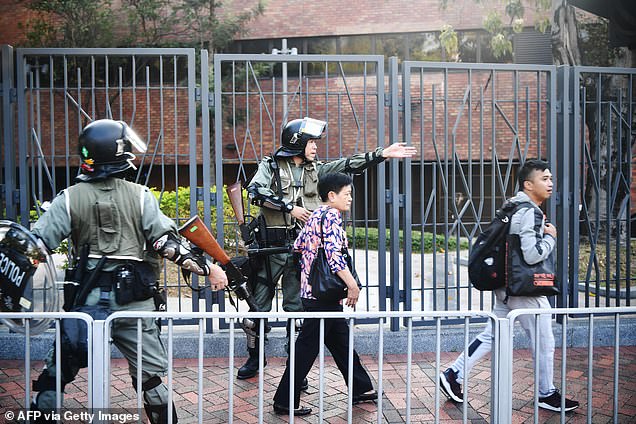 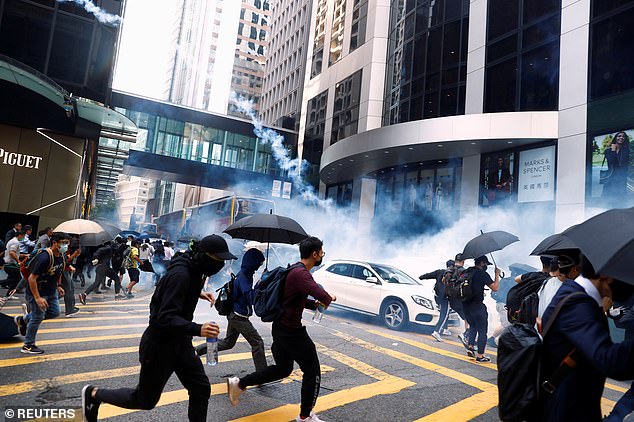 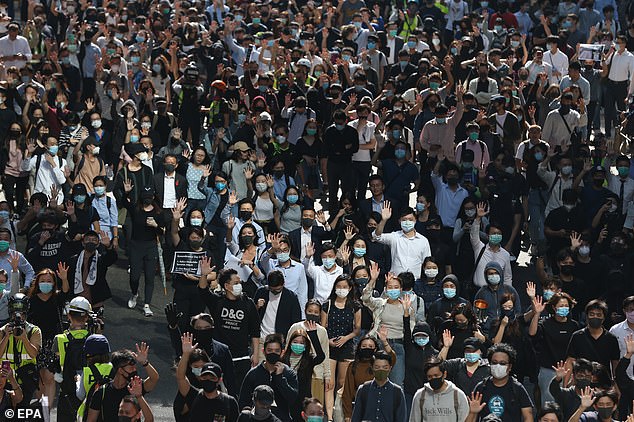 Hong Kong police said the attackers were ‘rioters’ – a sensitive term – and said they had trashed the nearby Ma On Shan train station, prompting the man to chase them down and remonstrate with them.

‘In the most shocking incident, some rioters poured flammable liquid onto a person and set him on fire,’ police spokesman John Tse told reporters at a press conference. ‘The man has been admitted to hospital in critical condition.’

Monday’s shooting is the third time protesters have been shot with live rounds by police.

On October 1, a student was struck in the chest as he and a group of activists attacked an officer with sticks and poles. He survived his wound and is being prosecuted.

Days later a 14-year-old boy was shot in the leg when a policeman in plainclothes fired his gun after his car was attacked by a crowd. He also survived and was arrested.

There have been only few fatalities amid the months-long unrest, with previous reports of suicides and a man who fell to his death while hanging pro-democracy banners on a building.

The protests were sparked by a since-abandoned bill that would have allowed extradition to mainland China. 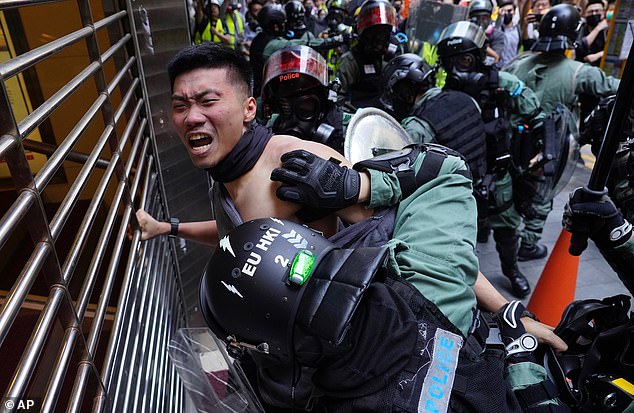 The protests have mushroomed into a wider rebellion against Beijing and a demand for more democracy, including direct elections for Hong Kong leaders.

The bill sparked fears of Beijing’s influence in Hong Kong despite the freedoms guaranteed to the city when it returned to Chinese rule in 1997.

China guaranteed 50 years of freedoms, but 22 of them have passed already and young people in Hong Kong today will see that deadline expire in their lifetimes.

Police tactics during the demonstrations, in which more than 3,300 people have been arrested, have fuelled further anger and calls for an investigation into alleged brutality.

Protesters also want Hong Kong leader Carrie Lam to resign, but she remains in post and has refused to make any major concessions to the demonstrators.