From the humble mince pie to decorating a festive tree, the royal family are at the heart of many Christmas Day traditions celebrated in the country today.

It is Queen Charlotte, the German-born wife of George III, who is credited with introducing the Christmas tree to the UK.

She is known to have a decorated an evergreen tree for her royal family as early as the 1790s, using candles, paper flowers and sweets as was the custom in Germany. 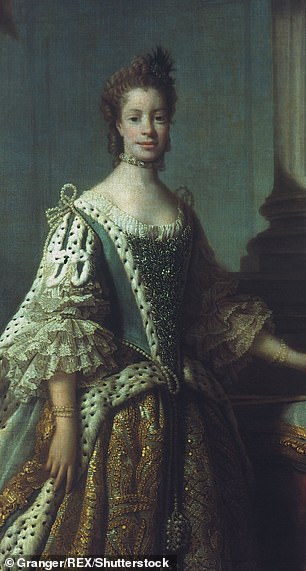 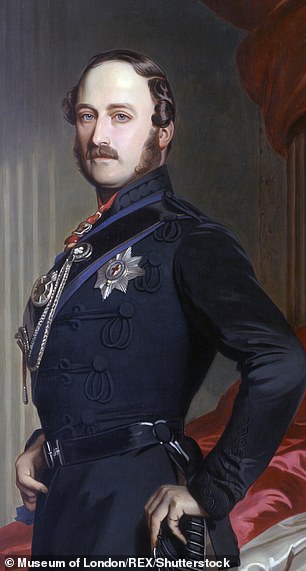 Queen Charlotte (left), the German-born wife of George III, is credited with introducing the Christmas tree to the country while Queen Victoria’s consort Prince Albert (right) is said to have popularised the tradition 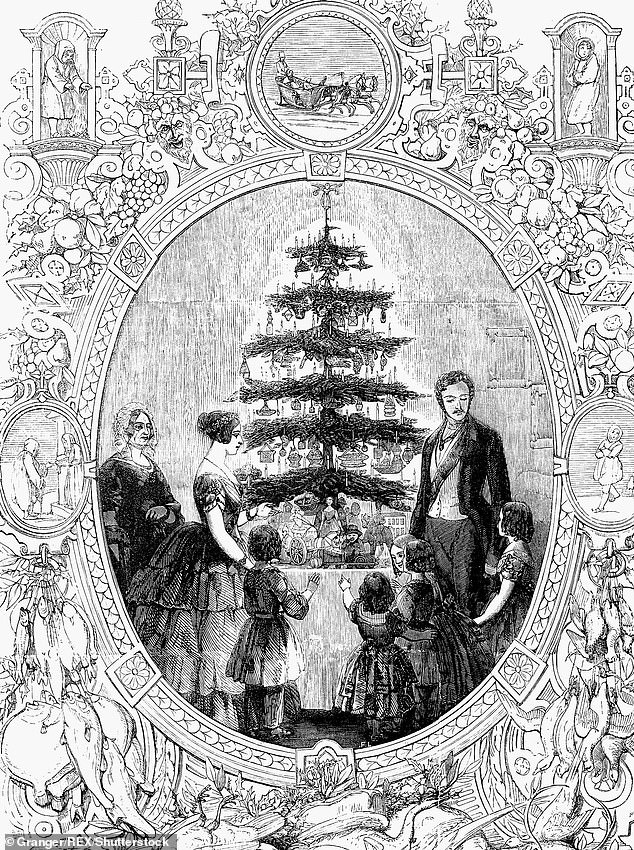 But the habit did not spread much beyond the royal family at that time.

The Christmas tree was actually popularised by Queen Victoria’s consort Prince Albert, who presented large numbers of trees to schools and Army barracks.

In 1848, a print showing the royal couple with their children around a tree was published in the Illustrated London News.

After this, the popularity of decorated fir trees escalated throughout society. 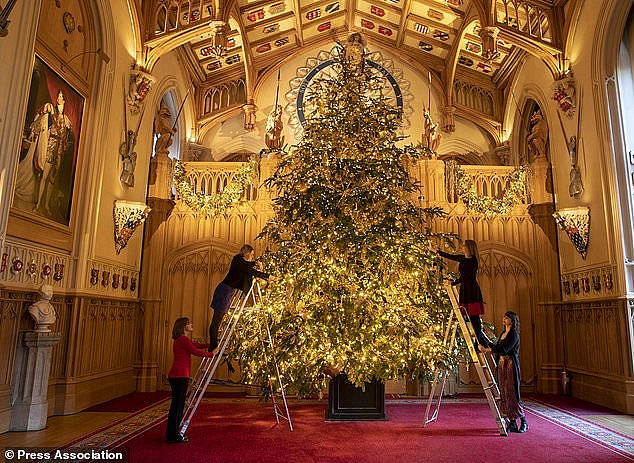 The tradition of decorating a tree has continued till this very day. Pictured: Staff decorating a 20ft Norman Fir Christmas tree in St George’s Hall at Windsor Castle, Berkshire

The Queen and her family enjoy a traditional roast turkey for their festive lunch.

Henry II, who ruled from 1154 to 1189, ate boar’s head, pickled in brine and stuffed, braised and roasted, at his banquets, according to the Royal Collection book A Royal Christmas, which explores how the royals have celebrated Christmas through the ages.

Royal turkey first appeared at the Christmas feast table of Henry VIII in the 1540s and became a Noel dish.

But its rise in popularity across the country in the late 19th century is down to Queen Victoria’s eldest son, the future Edward VII, for whom it was a personal favourite.

King George IV was partial to a plum broth on Christmas Day, made using large quantities of port, brandy, madeira, sherry and claret, as well as beef and veal, while medieval monarchs dined on roast swan and gilded peacocks. 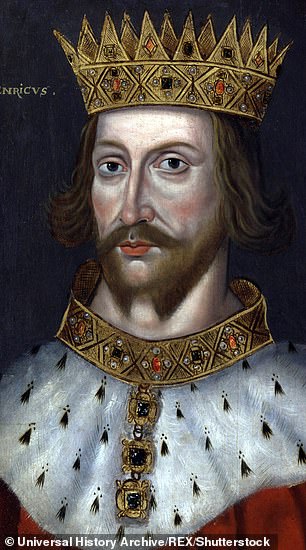 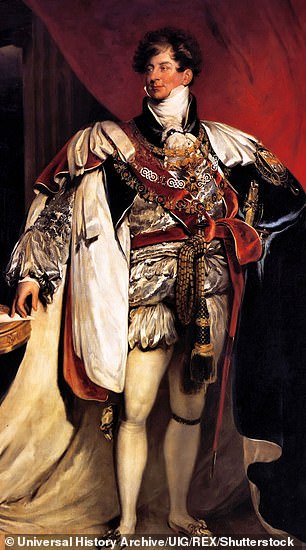 According to royal collection book, Henry II (left) ate boar’s head, pickled in brine and stuffed, braised and roasted, at his banquets while George IV (right) would give his staff plum broth and mince pies at Christmas and on New Year’s Day

George IV used to give his staff plum broth and mince pies at Christmas and on New Year’s Day, while Queen Victoria presented her household with plum puddings.

Each year, Queen Elizabeth II and the Duke of Edinburgh give 1,500 Christmas puddings to members of staff, including those in the Court Post Office and police serving at the palaces.

Traditionally the puddings are from royal grocer Fortnum & Mason, but last year they were reportedly from the Tesco Finest brand.

According to A Royal Christmas, until the 19th century, gifts were actually exchanged on New Year’s Day, in a tradition dating back to the 13th century. 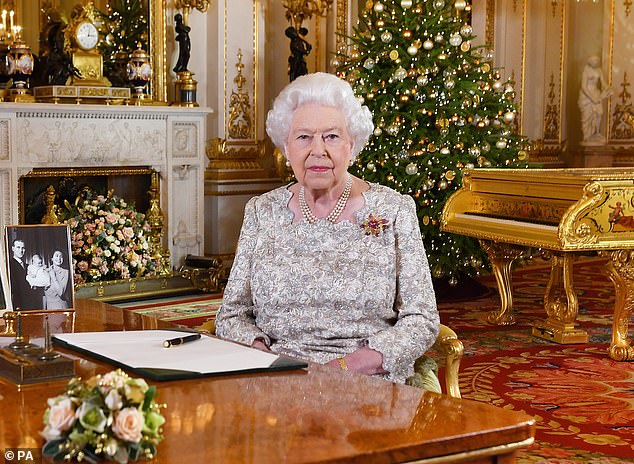 Continuing the festive traditions, the Queen and her husband give gifts to staff and send around 750 Christmas cards every year 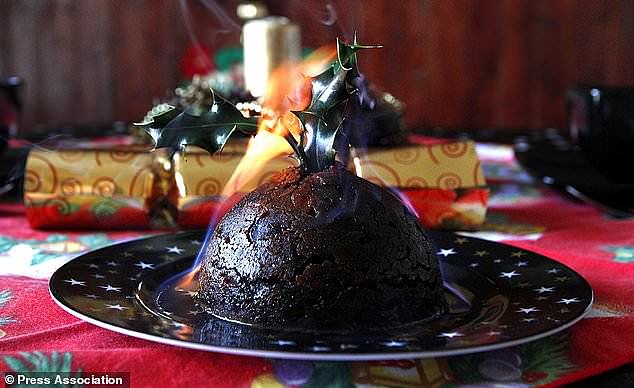 Each year the Queen and the Duke of Edinburgh give 1,500 Christmas puddings to members of staff

The monarch would be given presents by their subjects, and then would reciprocate.

The Queen also gives gifts to her staff, personally handing out the presents, usually vouchers, to long-serving members of the household.

The monarch and Philip send around 750 Christmas cards every year, which will usually feature a family photo.

The cards are signed ‘Elizabeth R’ and ‘Philip’, and include their official cyphers.

Family, friends, and members of the Royal Household are the recipients, but British and Commonwealth Prime Ministers, Governor-Generals and High Commissioners may also be sent one.

The duke has a further 200 cards delivered to different regiments and organisations close to him.

The first Christmas card was sent by educator and inventor Henry Cole in 1843 – a friend of Prince Albert’s, and the royal family’s love of Christmas meant they quickly adopted the idea. 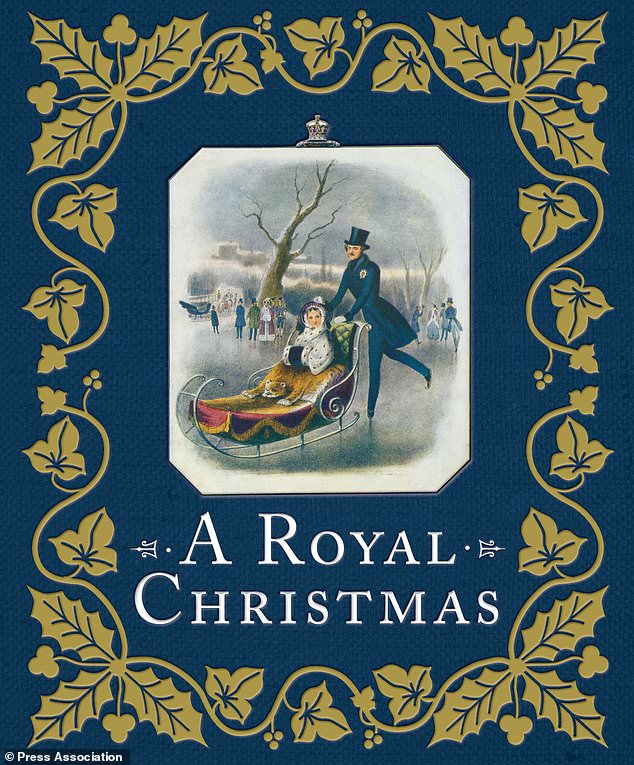 Former producer on The Jeremy Kyle Show reveals its tawdry secrets of psychological manipulation
Meghan Markle dazzles in diamonds and a 'Fijian Blue' dress
Philip Green's retail empire has been 'taking handouts while making staff redundant on the cheap'
'Our NHS is not for sale at any price' Nicola Sturgeon tells Donald Trump over post-Brexit trade
Michael Jackson's niece on 'ridiculous' Leaving Neverland documentary
'Neighbour from hell', 55, is told he'll be jailed if he plays loud music
Spain locks down an area with 400,000 people after spike in coronavirus cases
India brings in car rationing in a desperate attempt to reduce pollution in Delhi