Three people have been injured and more are feared buried beneath rubble after scaffolding collapsed in Reading today.

A building site worker at the former Friars Walk Shopping Centre sustained a head injury, and a male and female who were passing by at the time of the collapse, at Greyfriars Road at about 11.15am, were also hurt following the incident.

The man suffered chest pains and shock, and the woman sustained an ankle injury, but more are feared hurt as emergency services continue to scour the rubble following reports that one or two people may be ‘buried by the collapsed structure’.

A spokesman for South Central Ambulance Service said they received multiple 999 calls saying scaffolding had collapsed from the front of Greyfriars House.

The SCAS spokesman told MailOnline: ‘Our staff are currently assessing two patients – one with chest pains and one with a head injury – and the Fire Service are using their thermal imaging equipment to search the collapsed scaffolding.’ Pictured: Scaffolding surrounding a building under refurbishment collapsed in the middle of Reading town centre 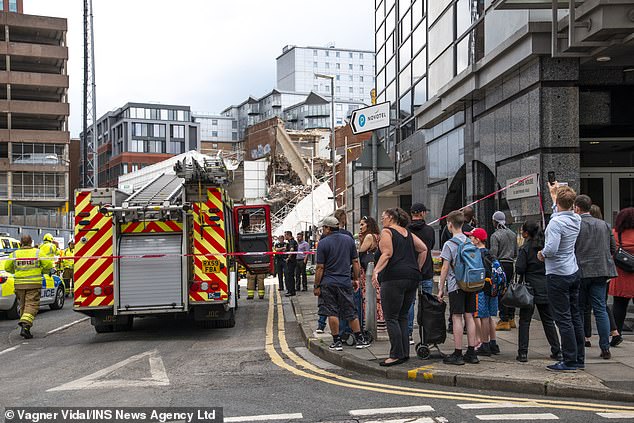 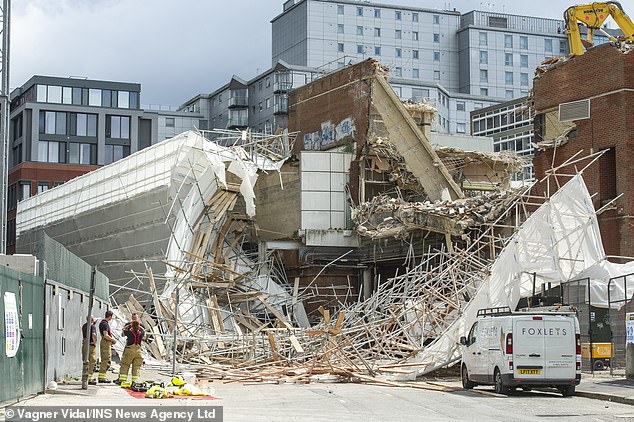 The SCAS spokesman told MailOnline: ‘Our staff are currently assessing two patients – one with chest pains and one with a head injury – and the Fire Service are using their thermal imaging equipment to search the collapsed scaffolding’

The spokesman also said: ‘We currently have a paramedic team leader in a rapid response vehicle and an ambulance at the scene and our Hazardous Area Response Team are en route along with a further two ambulances.’

The three injured people were taken to the Royal Berkshire Hospital.

One witness said there was ‘lots of shouting and running away after a sudden crash’ after the incident, which took place around the Station Hill demolition site.

DID YOU WITNESS THE COLLAPSE?

A 53-year-old bystander at the scene, who asked not to be named, said: ‘I was walking down Greyfriars Street to the office opposite the site, when I heard this very loud crash.

‘I thought it was just demolition work as they had been doing that for a while there, so I paid no attention. It was only when I turned around I saw a woman who saw what was happening and she was running away.

‘I saw this big cloud of dust coming towards me so I ran back to help the woman who looked badly injured. I went to check she was okay and although she was very shaken. she was still talking fine.

‘Then I did what I thought was best which was to give first aid where I could until the emergency services arrived.’

An Immigration Enforcement van was pictured at the scene of the collapse. 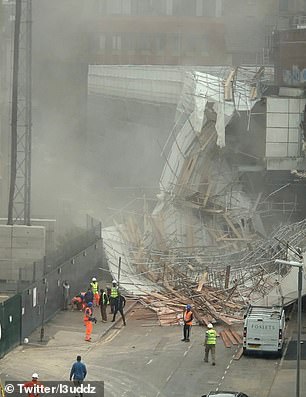 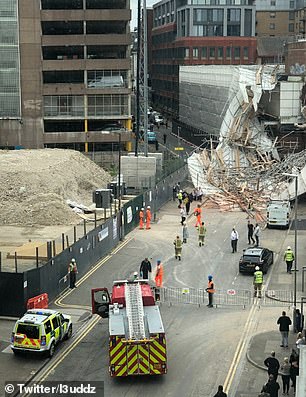 One witness said there was ‘lots of shouting and running away after a sudden crash’ after the incident, which unfolded at Greyfriars Road about 11.30am 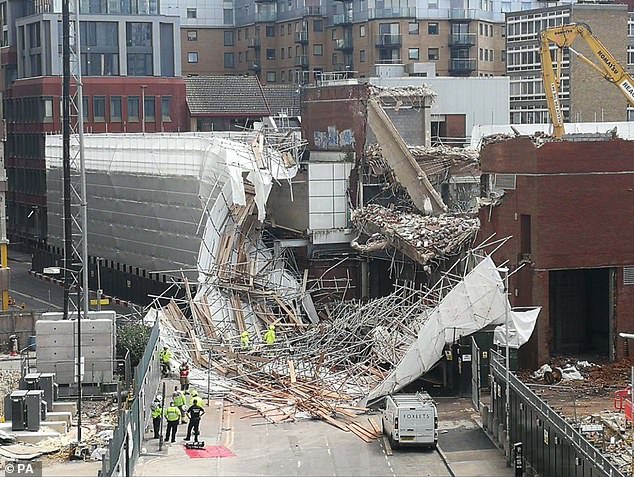 Pictured: Emergency personnel at the scene of collapsed scaffolding in Garrards Street, Reading

The centre of Reading was sealed off by police as a major incident sprang into action amid fears for the safety of dozens of construction site workers.

A spokesman for Thames Valley Police said that two people had been treated at the scene for minor injuries and that a Health and Safety investigation was expected to be launched as part of a joint investigation with the Royal Berkshire Fire and Rescuer Service.

A fire chief at the scene confirmed than an internal floor had collapsed as well as the scaffolding. He said it was not certain that no-one remained trapped under the mountain of tons of scaffolding and debris so a specialist urban rescue team had been called in.

Fire brigade incident commander Tony Heselton said at the scene of the collapse: ‘We have halted rescue operations at this time because the scaffolding framework is still too unsafe for us to move. 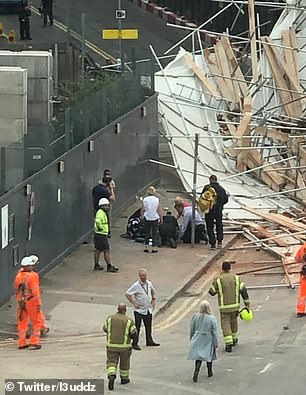 ‘We are unsure if there are any further casualties under the scaffolding at the moment but there has been no noise from under the scene and there probably is not anyone underneath but we are trying to make absolutely sure.

‘A thermal image camera is in use at the moment. However the scaffolding framework and surrounding debris is also hot, so the thermal camera is actually being over-ridden at this time.

‘The incident consists of a scaffolding collapse as well as an internal floor down. We are in the process of making the scaffolding safe to access so we can further prove there are no other casualties.

‘The Urban Search and Rescue team has been requested but they are travelling from Luton so when they will arrive is uncertain.’

Natalia Figuerido, aged 61 years, who was at the scene said: ‘I passed by the building a couple hours ago, going to the office when my son called me asking if I was hurt. He then said ‘you don’t know what happened, do you’ and told me a building had collapsed.

‘I didn’t see the actual collapse but I went to look because my house is really close to where it collapsed.’

A Health and Safety Executive (HSE) spokesman said: ‘We are aware of an incident and are making initial inquiries.’

Thames Valley Police Reading had tweeted: ‘We are currently at the scene of a scaffold collapse in Garrards Street, Reading.

‘Garrards Street is closed in both directions. Greyfriars Road is also congested. Please avoid the area if possible.

‘Two people are being treated for injuries on the scene.’ 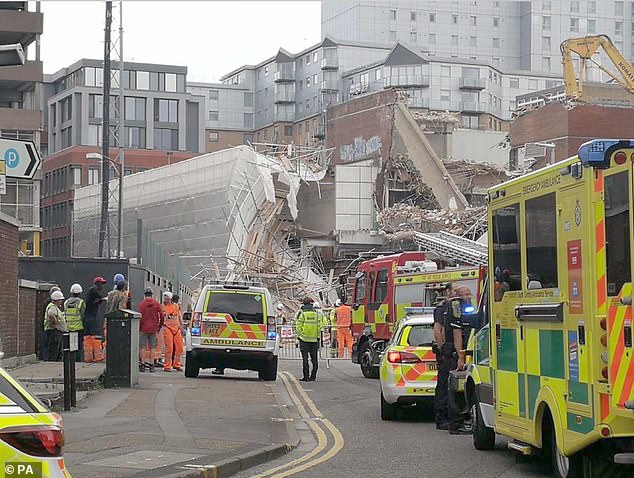 A spokesman for South Central Ambulance Service said they received multiple 999 calls saying scaffolding had collapsed from the front of Greyfriars House, with some saying two people had been ‘buried by the collapsed structure’ 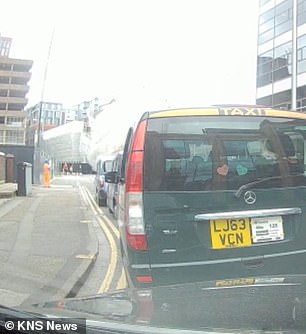 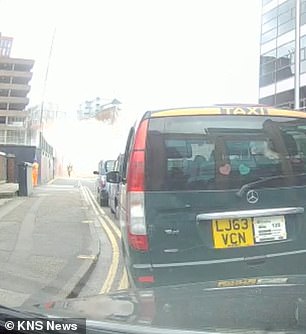 Pictured: The moment the scaffolding collapsed on Greyfriars Road in Reading today

There are ‘no concerns as to the structure of the car park, but members of the public will not be able to access their vehicles until further notice’, police said.

A spokesperson for Royal Berkshire Fire and Rescue Service said: ‘We are currently responding to an incident involving a collapsed structure on Garrard Street, Reading.

‘Five RBFRS crews are currently on scene. Garrard Street is currently closed while this incident is ongoing, so please avoid the area if possible.’