Gavin Williamson has declared he was ‘hanged for something he didn’t do’ in a furious blast at Theresa May after she sacked him as Defence Secretary.

The Conservative MP said he was the victim of a ‘slapdash witch-hunt’ after he was blamed for leaking from a top-secret meeting of the National Security Council, where ministers had discussed the possible security threat from Huawei.

Insisting he ‘didn’t say anything inappropriate to anyone’, Mr Williamson said the leak inquiry had been a ‘game of politics’ intended to ‘prove the PM’s political strength’.

Speaking to the Sunday Express he called on Mrs May to publish the Huawei leak report ‘so that everyone can make a judgment’. 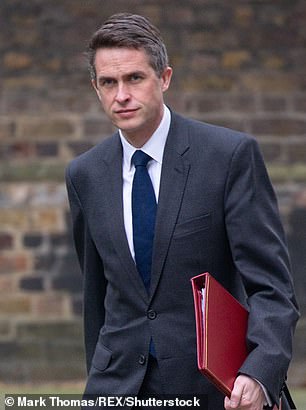 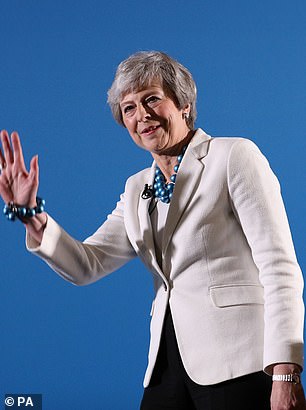 April 24: The story appears in the Daily Telegraph. It says Mrs May approved the decision despite security concerns raised by ministers at the meeting.

April 25: Mr Williamson denies that he or his team had leaked the story.

April 28: Sir Mark Sedwill’s leak inquiry is under way, as Foreign Secretary Jeremy Hunt says he has been quizzed.

May 1: Mr Williamson is sacked after the PM says she has ‘compelling evidence’ that he was responsible.

The sacked minister ‘strenuously denies’ being behind the leak.

Penny Mordaunt is named as his replacement at the MoD.

May 4: Scotland Yard says it will not launch a criminal probe into the leak.

Mr Williamson fires back at Mrs May saying he was the victim of a ‘slapdash witch-hunt’.

He said: ‘The PM has spoken about compelling evidence. Well, I’d like to see it. Publish the report and so everyone can make a judgment

‘Whatever this report is, it’s slipshod and slapdash. It would be rather nice if a professional organisation or independent individuals carried out another one.

‘This whole affair hasn’t been about trying to find the real culprit who leaked what was said at that meeting. It has been a game of politics, it’s been about settling scores and trying to prove the Prime Minister’s political strength.’

Mr Williamson said the leak affair had been ‘badly mishandled’ by both the PM and chief civil servant Sir Mark Sedwill.

As the rift between the PM and her former minister worsened, Mr Williamson was yesterday accused of spreading rumours about her health.

He was allegedly heard saying earlier this year that her Type 1 diabetes meant she was incapable of serving as Prime Minister.

The claim infuriated Mrs May’s allies, who say she is in robust health despite having to inject herself with insulin at least twice a day.

The 42-year-old was fired as Defence Secretary on Wednesday after Mrs May said there was ‘compelling evidence’ linking Mr Williamson to the leak.

The Tory MP ‘strenuously denied’ having leaked it, though he admitted he had spoken to Daily Telegraph reporter Steven Swinford hours after the meeting.

Mr Swinford has refused to name his source, in line with usual journalistic practice.

The Telegraph had reported that Mrs May gave the green light for Chinese telecoms giant Huawei to help build Britain’s 5G network. 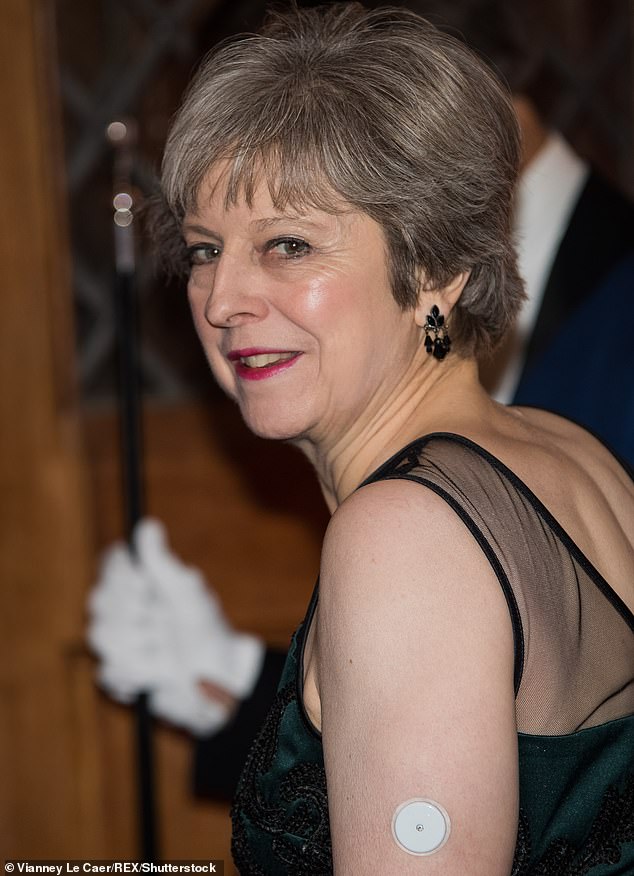 Williams was allegedly heard saying earlier this year that Theresa May, seen here wearing a patch for her Type 1 diabetes, was incapable of serving as Prime Minister 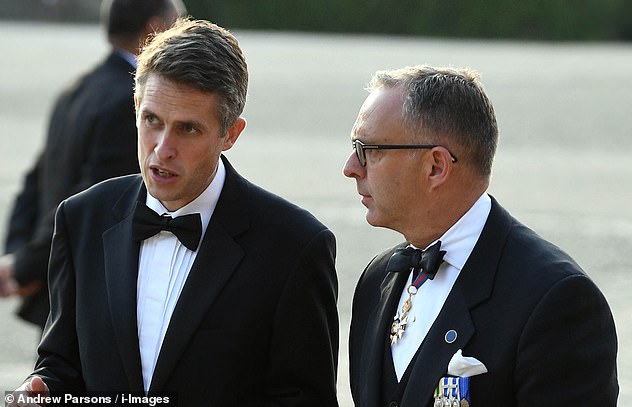 Last night, Mr Williamson said he had been the victim of a ‘shabby and discredited witch-hunt’ and called for the release of a leak inquiry report (pictured: Mr Williamson with Mark Sedwill)

The NSC leak caused an uproar in Whitehall as meetings are carried out behind closed doors and details are kept secret.

There were also concerns that such an unprecedented leak could affect Britain’s intelligence relationship with key allies.

Labour had called for a criminal probe into whether Mr Williamson had breached the Official Secrets Act but police said yesterday there would be no such investigation.

Met Police assistant commissioner Neil Basu said he was ‘satisfied the disclosure did not amount to a criminal offence.’

‘No crime has been alleged by the owner of the material and I am clear that the leak did not cause damage to the public interest at a level at which it would be necessary to engage Misconduct in Public Office.

‘It would be inappropriate to carry out a police investigation in these circumstances.’ 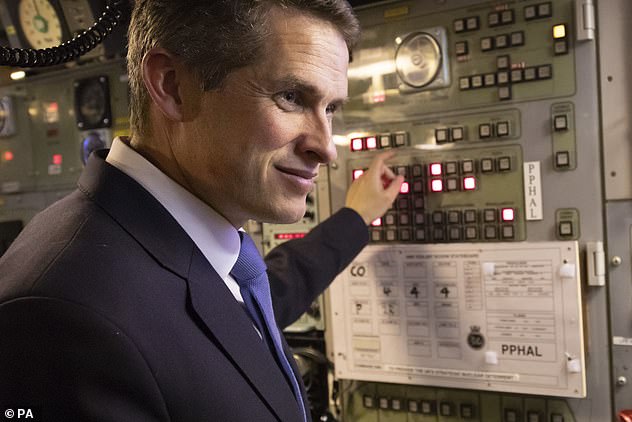 Former Defence Secretary Gavin Williamson, pictured on his last official duty on board a nuclear submarine was sacked after Theresa May accused him of leaking details from a top-secret National Sercurity Council briefing to a newspaper

Attention has focused since the sacking on Mr Williamson’s relationship with Mr Sedwill, which was said to be deteriorating.

The PM told ITV News on Friday: ‘I did take a difficult decision.

‘This was not about what was leaked, it was about where it was leaked from. It was the importance of the question of trust around that National Security Council table.’

Asked if she was convinced Mr Williamson was responsible for the leak, Mrs May said: ‘I took the decision that I did. That was the right decision.’

Huawei has come under fire for its alleged close ties to the Chinese state, sparking fears that the technology could be used for espionage. 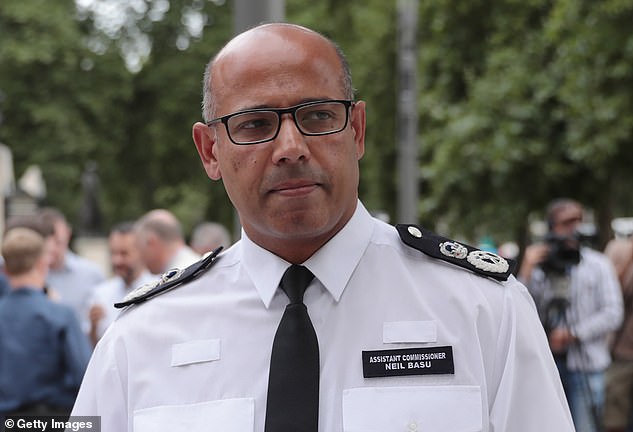 Assistant Commissioner Neil Basu (pictured), head of the Metropolitan Police’s Specialist Operations said there was no evidence to suggest the Huawei leak which led to Gavin Williamson’s sacking breached the Official Secrets Act

Australia, the US and New Zealand have moved to ban Huawei from building parts of their 5G networks.

The U.S. recently warned that there was no safe level of involvement by Huawei in the 5G networks of Western powers.

Huawei has denied having ties to the Chinese government, with the company’s founder denying Beijing has ever asked his company to help spy on its clients.

Mr Williamson had been a vocal sceptic of Huawei, saying last year he had ‘very deep concerns about the company’s involvement in the UK.

China’s defence ministry fired back at him last December, calling the criticisms ‘groundless’ and saying they were based on ‘deep-rooted pride and prejudice’.