Identical twins are among the 1,000 soldiers to parade for the Queen at Trooping the Colour today – and have said they always regarded themselves as rivals.

Ben and Thomas Dell, both 21, from Bath, Somerset are participating in the ceremonial spectacle in London – which marks the Queen’s official birthday.

It will be the first time Thomas troops his colour but Ben’s third time involved in the pomp and pageantry of the event.

‘Everything is a competition between both of us,’ Ben said. 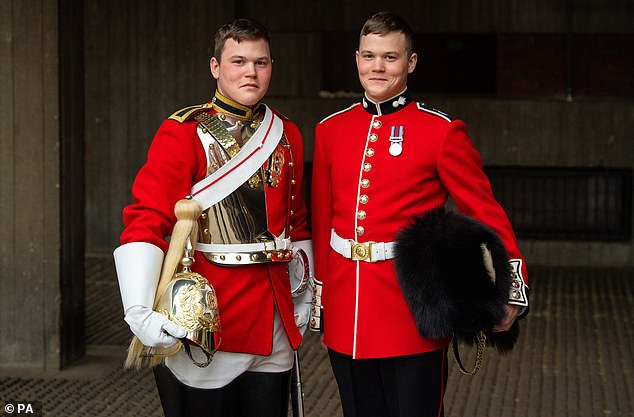 Ben and Thomas Dell (left and right), both 21, from Bath, Somerset are participating in the ceremonial spectacle in London – which marks the Queen’s official birthday 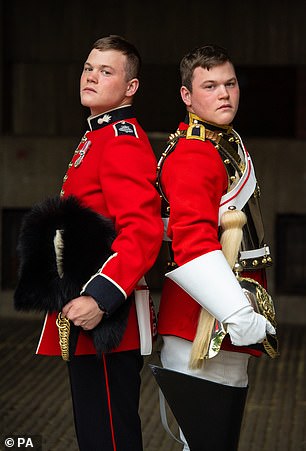 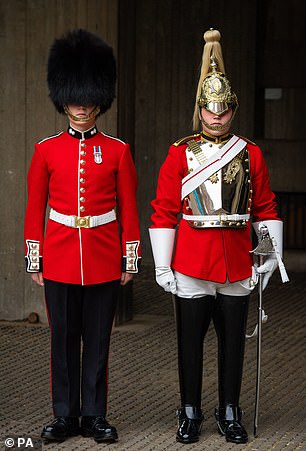 Guardsman Thomas will be with the Grenadier Guards and Trooper Ben will be with the Household Cavalry. It will be the first time Thomas troops his colour but Ben’s third time involved in the pomp and pageantry of the event 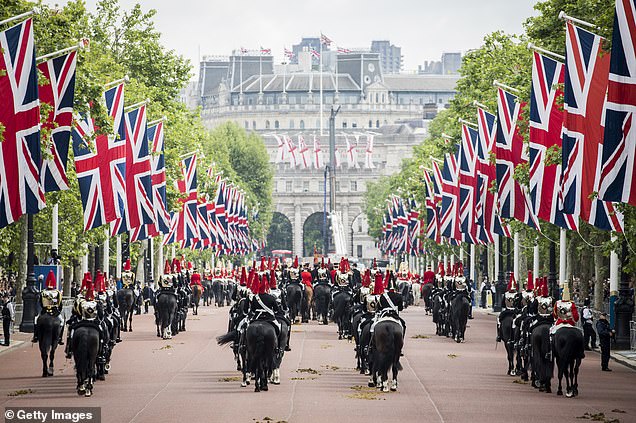 ‘At home, since we were very young all the way up to now, it’s always a competition of who’s the better one. It’s a lot of fun.’

The 21-year-old twins will be among more than 1,000 soldiers taking part in the parade, along with 400 musicians from the massed bands.

Recognised for their scarlet tunics and bearskin hats, the Grenadier Guards carry out an operational role as well as duties at Buckingham Palace and Windsor Castle.

The mounted regiment of the Household Cavalry, with which Ben serves, provides ceremonial troops for all state occasions, including the opening of Parliament.

As a Grenadier Guard, Thomas was deployed to Iraq to work with the US coalition and returned to the UK just before Christmas. 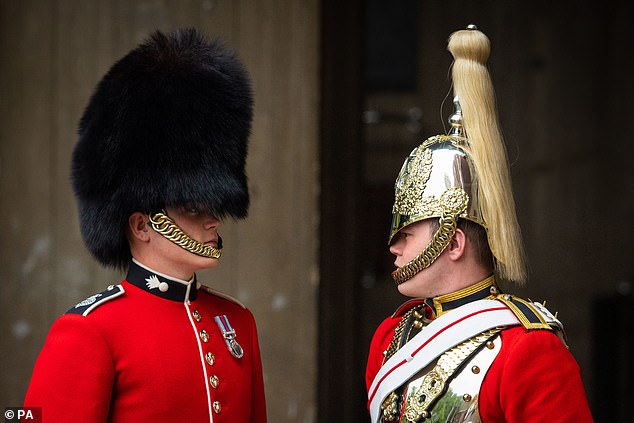 Guardsman Thomas Dell of the Grenadier Guards (left) and his twin brother Trooper Ben Dell (right) of the Household Cavalry, who will both take part in the Trooping the Colour tomorrow 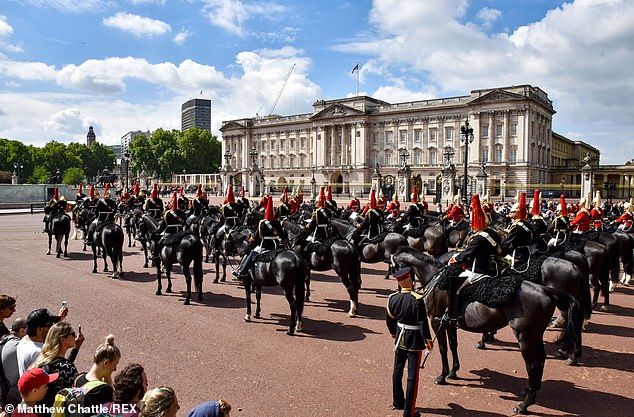 A total of 113 words of command will be given by the Officer in Command of the Parade, whose route extends along The Mall to Horse Guards Parade, Whitehall before turning back on itself. Soldiers are pictured at a rehearsal for Trooping the Colour

Referring to the reaction from their parents, Ben said: ‘They’re proud of both of us for what we’ve done, him obviously going off to Iraq and being in the infantry, me doing this for the last couple of years, doing all of the ceremonial duties.

‘They’re both proud of both of us and what we’ve done and achieved.

‘This is only the start of the career, we’ve still got years left in the Army. A lot more time to be proud of us, I guess.’

Thomas continued: ‘They say there’s no difference between us, we’re both the same but they’re equally proud, so we’ve both achieved our own goals in our own respective fields.

‘Maybe different paths in the Army we both wanted to take at different points but, overall, it’s always what we wanted to do and we’ve achieved what we want, so now it’s focusing on the careers.’ 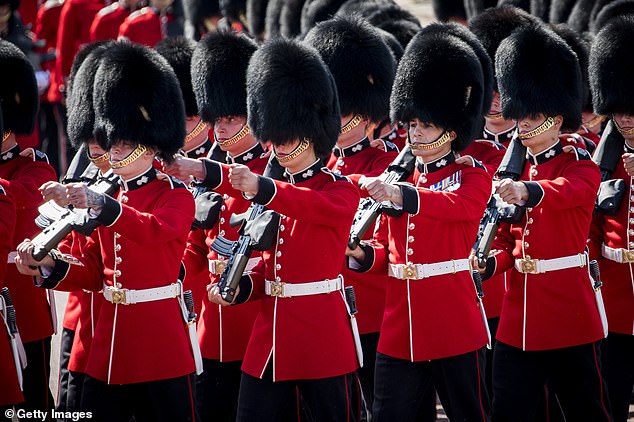 But the brothers, from near Bath, Somerset, once pursued the same path, as Ben revealed he also considered becoming a Grenadier Guard.

‘I wanted to be a Grenadier but he (Thomas) said no,’ he said.

‘He said that it was his regiment and I had to find my own, so I found the Household Cavalry, which is a good choice for me. I like it here.’

Despite Ben finding his own unit, Thomas believes the Household Cavalry are on ‘his side’ in the rivalry.

‘So far, everyone seems to like him more than me, but I think that’s just because they work with me,’ Ben said.

This year the ceremony, which is staged every June in London’s historic Horse Guards Parade, will see Thomas’ Colour – of the 1st Battalion Grenadier Guards – being trooped.

Attended by members of the royal family including the Queen, the parade brings together prestigious regiments and the families of the serving men and women.