Sydney Opera House glowed with images of heroic firefighters who have been battling bushfires across the country.

The projections began at 8.30pm on Saturday and were a tribute to the firefighters and communities who have suffered through the current crisis.

One image showed a woman hugging a volunteer firefighter, while another was of a sign which read: ‘Thank You firies’. 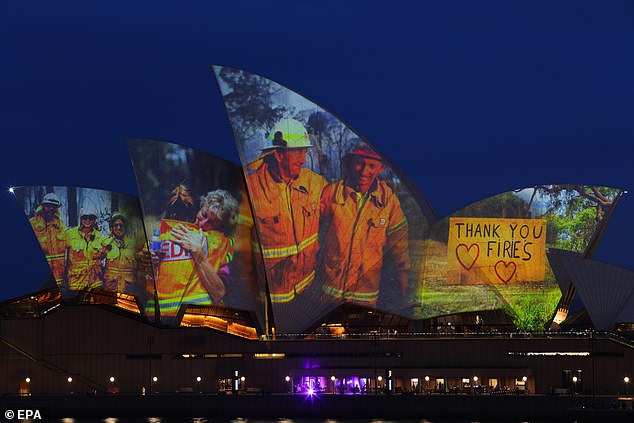 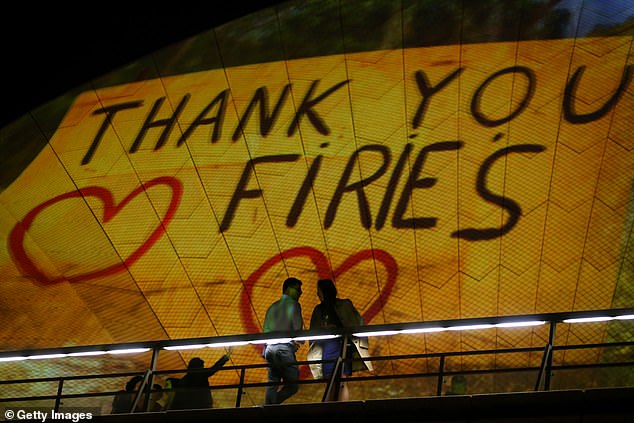 Onlookers were impressed by the display, with many seen tasking pictures on their phones 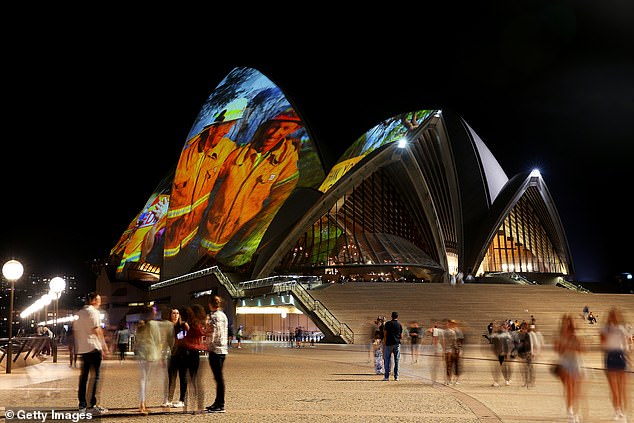 The projections began at 8.30pm on Saturday as a tribute to the firefighters and communities who have suffered through the current crisis 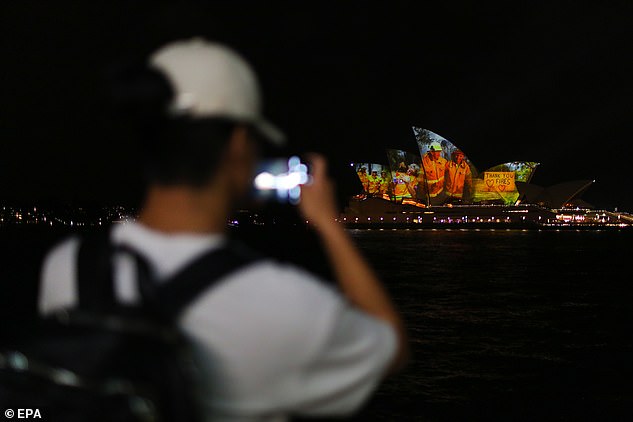 Within the darkness, the light shined through, Onlookers were amazed at the stunning imagery

Fire crews have been working tirelessly since the bushfire season began back in October.

There have been 27 people killed and thousands of homes destroyed already, but there are fears those numbers will rise as the season could last until March.

Over seven million hectares of land have burned in the fires.

The national death toll in Australia’s 2019/2020 bushfire season was 27 as of Saturday January 11, with 20 confirmed deaths in New South Wales, three in South Australia and four in Victoria.

Robert Lindsey, 77, and Gwen Hyde, 68, were found in their burned out Coongbar home near Casino on October 9th.

The body of 85-year-old George Nole was found in a burnt out car near his home in Wytaliba, near Glen Innes.

Vivian Chaplain, a 69-year-old woman from Wytaliba, succumbed to her injuries in hospital after attempting in vain to save her home and animals from the blaze.

The body of 63-year-old Julie Fletcher was pulled from a scorched building in Johns River, north of Taree.

Barry Parsons, 58, was found in a shed at Willawarrin, near Kempsey.

A 59-year-old man was founded sheltered in a Yarrowitch water tank on November 7. He died of injuries on December 29.

Firefighters Andrew O’Dwyer, 36, and Geoffrey Keaton, 32, died on December 19 after a tree fell on their truck while they were travelling through Buxton, south of Sydney.

Samuel McPaul, 28, was battling a blaze in Jingellic, in Green Valley, about 70km east of Albury on the border of NSW and Victoria, on December 30 when a ‘fire tornado’ caused his 10-tonne firetruck to roll.

The body of 69-year-old Ron Selth was found in his Charleston home, which was destroyed by the Cudlee Creek blaze on December 21.

Dairy farmer Patrick Salway, 29, and his father Robert, 63, died trying to save their property in Cobargo, near Bega, on December 31.

A 70-year-old man, named by local media as Laurie Andrew, was found dead outside a home at Yatte Yattah, west of Lake Conjola.

The body of a 70-year-old man was found in a burnt vehicle on a road off the Princes Highway at Yatte Yattah on the morning of New Year’s Day.

The body of a 62-year-old man was found in a vehicle on Wandra Road at Sussex Inlet about 11.30am on New Year’s Day.

A body, believed to be a 56-year-old man, found outside a home at Coolagolite, east of Cobargo on New Year’s Day.

An off-duty RFS firefighter, believed to be 72-year-old Colin Burns, was found near a car in Belowra after the New Year’s Eve fires swept through.

Beloved great-grandfather Mick Roberts, 67, from Buchan, in East Gippsland, was found dead at his home on the morning of New Year’s Day.

Fred Becker, 75, was the second person to die in Victoria. He suffered a heart attack while trying to defend his Maramingo Creek home.

David Harrison, a 47-year-old man from Canberra, suffered a heart attack defending his friend’s home near Batlow on Saturday, January 4.

A 71-year-old man was found on January 6. Police have been told the man was last sighted on December 31, 2019 and was moving equipment on his property in Nerrigundah.

Forest Fire Management firefighter Mat Kavanagh, 43, was killed Friday January 3 when he was involved in a two-car crash on the Goulburn Valley Highway.

A firefighter is killed while battling a blaze in the Omeo area, Emergency Management Commissioner Andrew Crisp confirmed on Saturday night

Details surround the death are not yet known

Well-known outback pilot Dick Lang, 78, and his 43-year-old son, Adelaide surgeon Clayton Lang, died in the Kangaroo Island bushfire after their car was trapped by flames.