Theresa May is preparing to to abandon her plan to ask the EU for a nine-month Brexit delay after furious cabinet ministers told her the Tory party would only accept a three-month wait.

The Prime Minister is now expected to write to the EU asking for the short extension, as Downing street admitted last night that Britain’s departure from the European Union is at a crisis point.

Mrs May was forced into the u-turn after being put under severe pressure by senior ministers at a cabinet meeting and will now write to Donald Tusk for a considerably shorter extension.

The sudden change of direction left some ministers reeling, one told The Sun: ‘Nobody knows what the f*** is going on, or even who in No10 is actually gripping it. Maybe nobody is.

‘The whole thing is a national humiliation on a scale we have not seen in many, many decades – if ever before.’

At the 90-minute cabinet meeting cabinet ministers were at loggerheads on just how long a potential extension. would be.

Defence Secretary Gavin Williamson and International Trade chief Liam Fox were thought to be against a lengthy delay, as was Commons leader Andrea Leadsom.

She said: ‘This used to be the cabinet that would deliver Brexit and now from what I’m hearing it’s not.’

It comes a thousand days on from the 2016 referendum – and just ten days before the UK is due to leave the Brussels club. 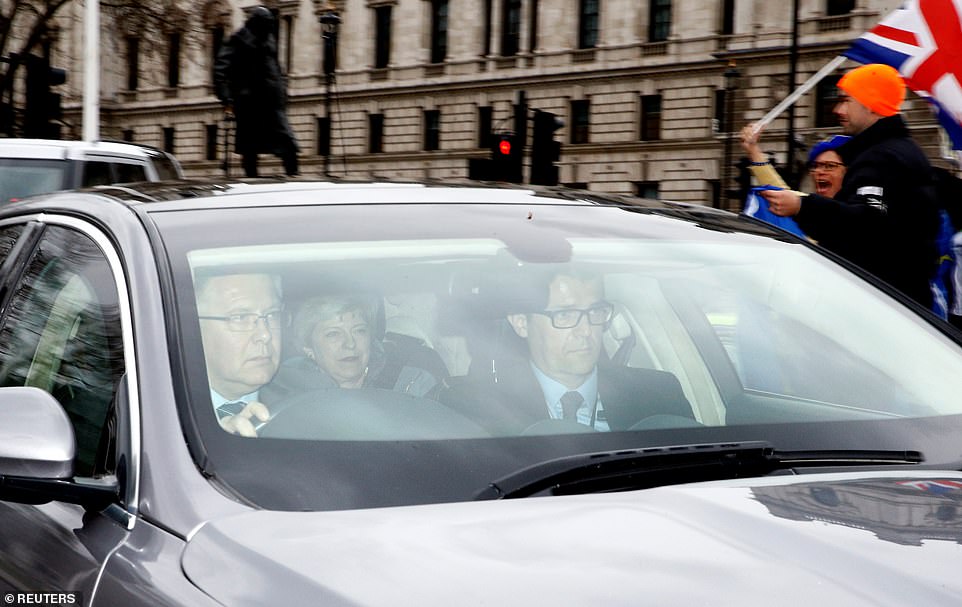 Prime Minister Theresa May sat behind her security guard as she is driven to the Houses of Parliament on Tuesday, the PM will head to Brussels tomorrow as she seeks to agree an extension to Article 50 with the European Union 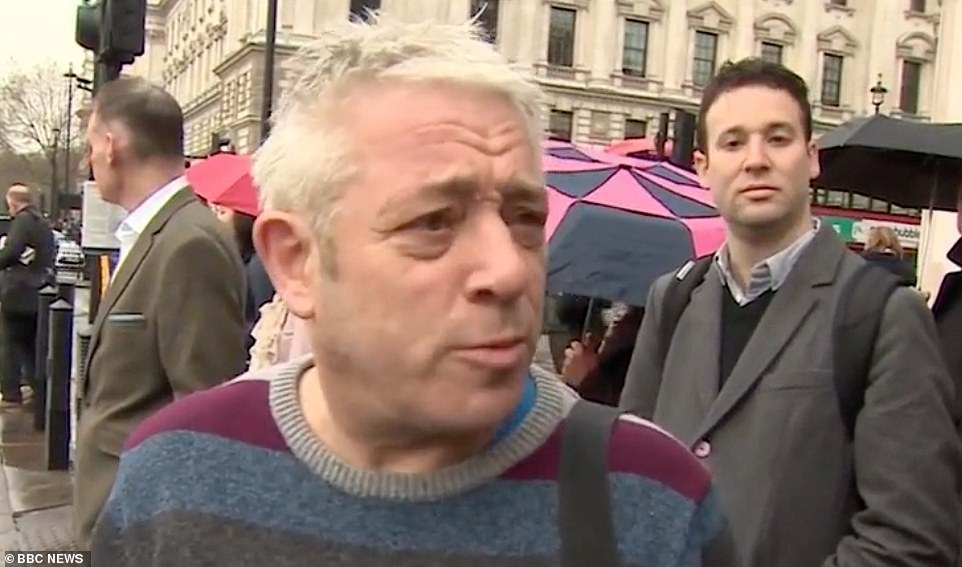 Speaker John Bercow refused to answer questions over his invocation of 17th century precedent, during a stormy session of the Cabinet, the Prime Minister rounded on Mr Bercow and said he was making a laughing stock of Parliament.

She told ministers that parliamentary opposition to No Deal, the rejection of her plan by MPs and John Bercow’s decision to block a third vote this week meant she had been forced to try to put off the March 29 departure date.

Tomorrow she will travel to Brussels to establish the terms of an extension to Article 50 before putting it to the Commons next week.

During a stormy session of the Cabinet, the Prime Minister rounded on Mr Bercow for dredging up a 17th century convention in order to block a third vote on her plan. She said the Speaker was making a laughing stock of Parliament.

A Cabinet source said: ‘The only thing agreed this morning was that everyone hates Bercow.’ The Prime Minister’s official spokesman said Mrs May had predicted a crisis if MPs rejected her deal for a second time, adding: ‘That situation has come to pass.’ 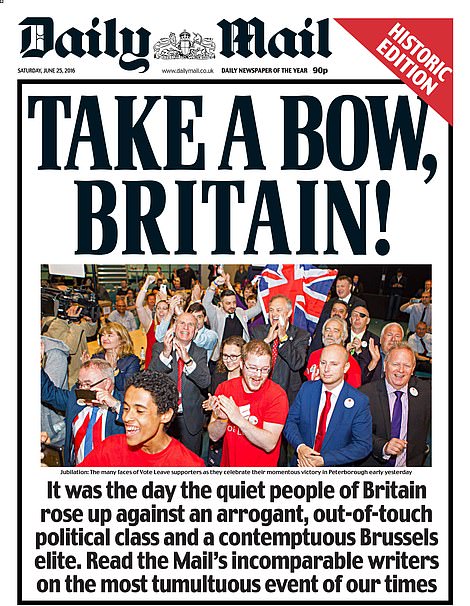 Mrs May told the Cabinet she would ask for an extension with a break clause that could allow the UK to leave the EU by June 30 if her withdrawal agreement is passed.

But she acknowledged that, with no deal agreed, and the UK due to leave next week, she would also have to seek a longer extension.

Ministers were not given the proposed end date of the longer extension, with allies of the PM apparently fearing a leak to the media.

Downing Street denied reports that Mrs May was ready to ask for a delay lasting up to two years.

Her deputy David Lidington is said to have told his EU counterparts that she would seek a delay of nine to 12 months unless she can get her deal through in the coming weeks. No 10 dismissed the report yesterday.

But a Cabinet source said it was already clear that nine months would not be long enough because the new European Commission will not be in place until the autumn. ‘A nine-month extension is a joke,’ the source said. ‘There will be no one to talk to in Brussels until October – the idea we can get a new deal agreed in three months is ridiculous.

‘All it means is we’ll have to go through this humiliating exercise again at Christmas. What is the point?’

Irish foreign minister Simon Coveney said the UK would need to provide a ‘very persuasive plan’ to support any request for a long extension to the Article 50 negotiation process.

Former Cabinet minister Nicky Morgan said both Parliament and the Government had to get a grip to prevent a slide into political chaos. 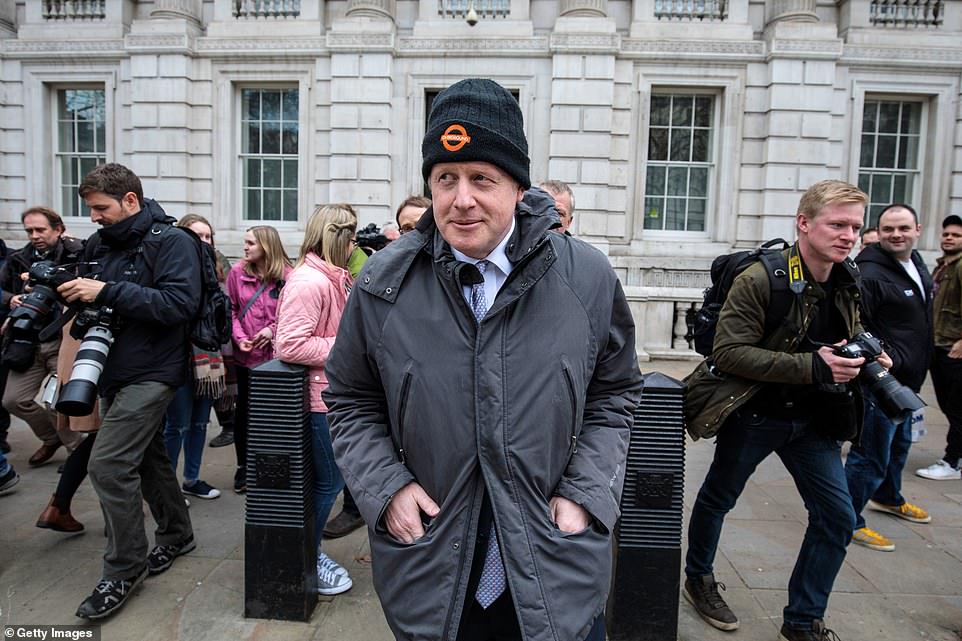 Former Foreign Secretary Boris Johnson leaves the Cabinet Office on Tuesday, he had face-to-face talks with Mrs May to tell her he continued to oppose her deal

Mrs Morgan said: ‘It is jaw-dropping. The country is watching horror-struck at the lack of decisions from Westminster. 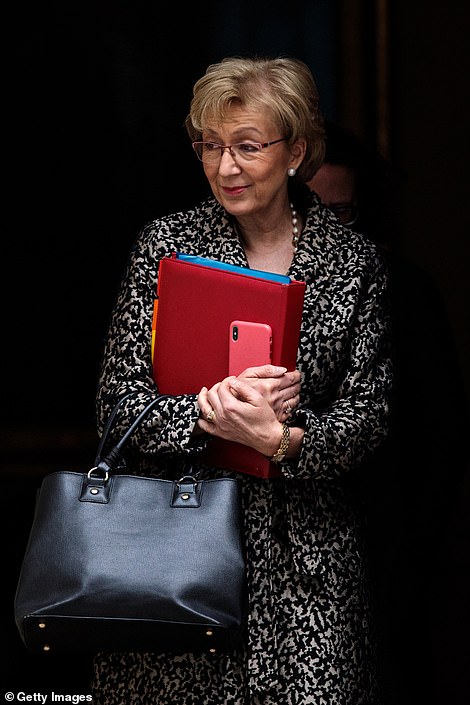 Andrea Leadsom accused Cabinet Remainers of frustrating Brexit, and hinted she could quit (pictured leaving the meeting on Tuesday)

‘At a time when the country needs stable government, people are still indulging in what they would like rather than what can be achieved.’

Some ministers argued that the prospect of a long delay would pile pressure on the pro-Brexit Tory MPs of the European Research Group to back the PM. But Defence Secretary Gavin Williamson suggested the move would backfire, telling her: ‘Trust your instincts that a long extension would create division in the party.’

Mrs May’s plan was defeated by 230 votes in January and again by 149 votes last week.

She had planned to put it to a vote again yesterday, but was blocked by Mr Bercow’s ruling that MPs should not be asked to vote again on the same proposition.

Allies of the Prime Minister still believe it is possible that MPs could finally knuckle under next week.

Her official spokesman said: ‘The Prime Minister is absolutely determined to find a way in which Parliament can vote to leave the EU with a deal.

‘The PM wants that to happen as soon as possible.

‘She does not want a long delay and believes that asking the British public to take part in European parliament elections three years after they have voted to leave would represent a failure by British politicians.’

Brexit Secretary Steve Barclay said there was a growing risk of no Brexit unless MPs agreed to back Mrs May’s deal in the coming days.

Nature writer calls for children to be allowed to gather primroses to foster a love of the outdoors
No10 warns Boris Johnson will fight a No Deal election against 'hostile' EU
The head of the Royal Horticultural Society? It's Mr Weed, of course
People are sharing their funniest #WeddingFails thanks to Jimmy Fallon
Seattle police moves in to reclaim their precinct in CHOP, clearing the block in under 30 minutes
No more taxi service to Space Station after Soyuz fiasco
Singer Duffy tells fans she was raped, drugged and held captive
Nine dead and 16 injured in Ohio bar shooting as police search for second gunman