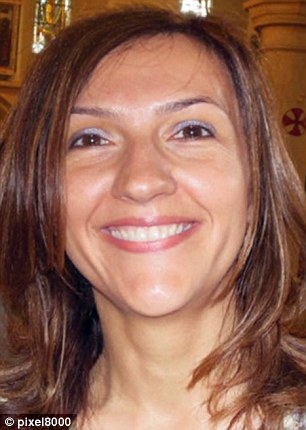 A mother-of-two killed by a crazed jihadi had been worried about the risk of a terror attack when her job relocated near Westminster.

Aysha Frade was walking to pick up her children from school when Khalid Masood mowed her down as he carried out his sickening rampage along Westminster Bridge, an inquest heard today.

Just weeks earlier, the school administrator had told her husband she feared a terror attack when her job was moved to central London but was reassured she would ‘be in the safest part’ of the capital.

The 44-year-old had her back to Mahood’s SUV and was looking at her phone when she was thrown some 17.4 metres. She died instantly when she was hit by a passing bus.

Moments after she was killed, she received a call from her husband which was answered by a passer-by who told him there had been a ‘terrible accident’ and he should get to the scene.

Her husband John had earlier told the inquest: ‘She worried about the new location of [her college] DLD’s campus moments away from parliament. She asked me several times, what if anything were to happen in Westminster?

‘My words were always of encouragement and positivity, never once entertaining how an incident could horrifically become reality, especially a place I imagined so highly clad with security, CCTV, and police.

‘Least of all could I ever imagine the odds of something happening to Aysha, at that precise spot, at that exact moment, innocently walking away from a job she cherished on her way to pick up her children whom she emphatically loved above all else in this world.’ 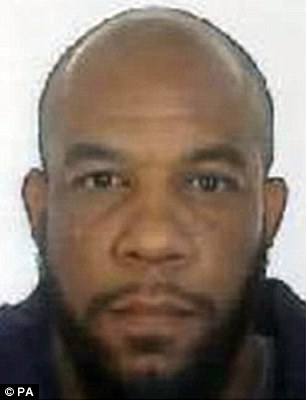 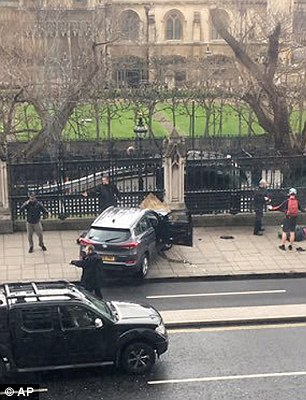 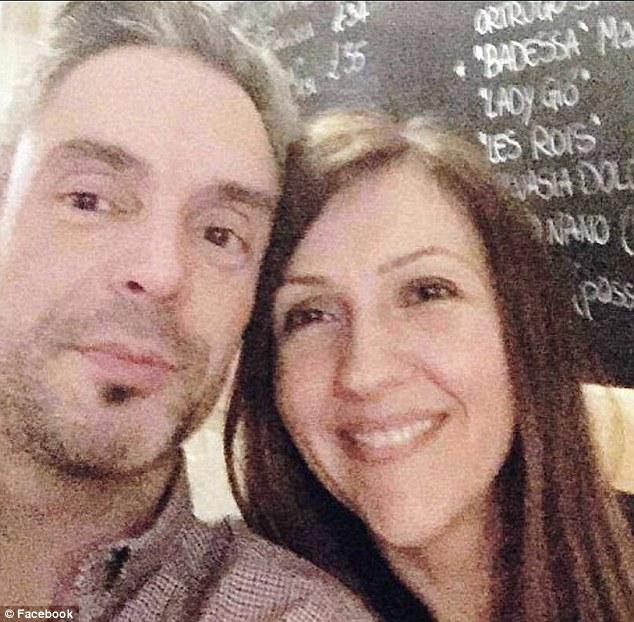 Aysha Frade, 43, who came from Britain but whose family was from Spain, with her Portuguese husband John

Masood was driving around 31mph when he deliberately knocked down Kurt Cochran, 54, Leslie Rhodes, 75, Mrs Frade, 44, and Andreea Cristea, 31, on the bridge before stabbing Pc Keith Palmer to death at the gates to the Palace of Westminster on March 22 last year.

Gareth Patterson QC, representing her family, asked him: ‘Having been focused on her phone it’s clear, isn’t it, that at no stage do you see Aysha turning round or doing anything else, any movement to suggest that she heard the car or was aware of what was going to happen?’

Members of her family sat in the Old Bailey looking down at the ground as graphic and distressing footage of the tragedy was shown.

Mr Patterson said there was hair on Masood’s car, suggesting she hit her head on the windscreen.

She was then thrown into the road, with the number 53 bus braking and coming to a halt in five seconds. 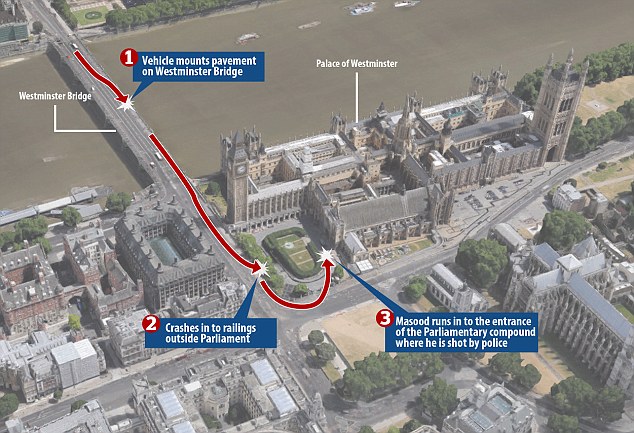 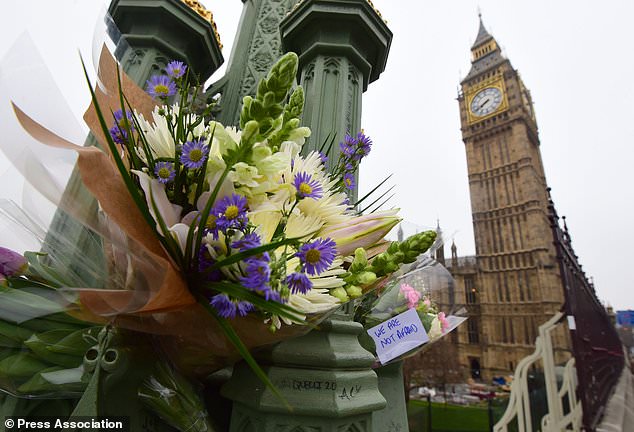 Mr Patterson said graphic photos and videos had been posted on the internet of Mrs Frade’s body by passers-by, causing ‘real distress to the family’.

He added: ‘Despite efforts to have them taken down because of the distress caused, to this day there are images on the internet.’

Bus passenger Rob English picked up Mrs Frade’s phone from the road, and answered a call from her husband John.

Mr English told him there had been a terrible accident and advised him to get to the bridge.

Earlier, Mrs Frade’s husband told the inquest how the couple met at the gym in 1996, and described how he was immediately struck by her smile.

He said Aysha was ‘relaxed, fun to be around, laughing and smiling’, and greatly valued her family and close friends.

She loved her job as a PA at a school and was a devoted mother to her two daughters, the Old Bailey heard.

Mr Frade said the couple had plans for a big white wedding in 2006, but the idea was shelved when she became pregnant with their first daughter in 2005.

Keen to be married before she gave birth, the couple ‘grabbed two strangers from the street’ to be witnesses and were married in a 10-minute ceremony. 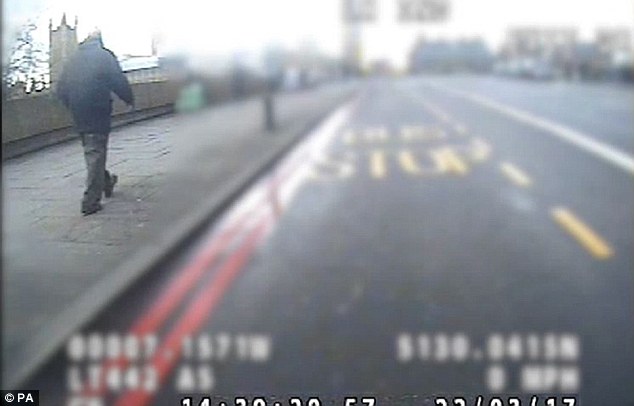 CCTV issued by Metropolitan Police of Leslie Rhodes (far left), one of the victims of the Westminster Bridge terror attack shortly before he died

The inquest heard Mrs Frade ‘lived and breathed for her daughters’, and her husband was in awe of the balance she struck ‘between tender care and discipline’.

He told the court that she was a loving daughter to her aging mother who she visited every day.

Mr Frade went on: ‘The truth is that she still doesn’t feel like she’s gone, her love surrounds us, her aura lights up the paths of life’s journey.’

He said his wife had been ‘cruelly and brutally ripped away from us’.

Her sister Michelle also read an emotionally-charged statement to the hearing.

She said: ‘People cannot understand how this despicable act of futile atrocity has impacted on not only her families’ lives but also herself. She will never be able to smile again, see her daughters grow up.’

Her sister went on: ‘Aysha and all the other victims of this tragedy are people and not just statistics or a name that will be forgotten once this inquest is over.’

Inquests are being held into Mrs Frade’s death and those of four other victims of the attack in March last year. The jury inquest is expected to last up to five weeks. 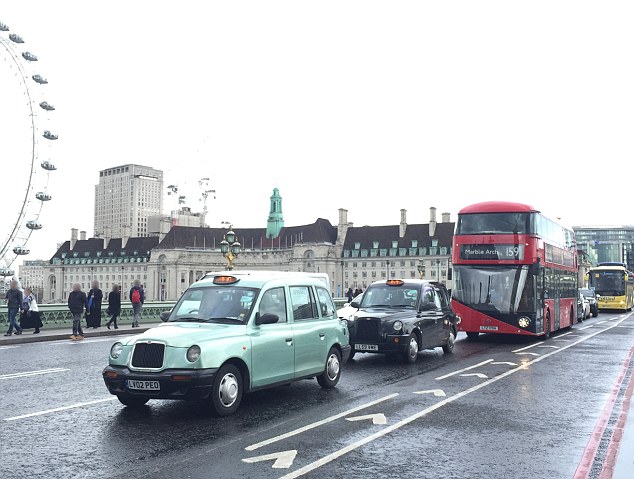 Prince William joins Stephen Fry to record minute-long radio message about mental health
Prince George and Charlotte are traditional, the Phillips are tomboys and Monaco set are 'cool kids'
Evening exercise does NOT keep you awake and could even stop you over-eating
Prince Harry 'plans to take two weeks of paternity leave' after the birth of his baby
China extends its New Year holiday to fight killer coronavirus outbreak
Ryanair flight from Alicante to Newcastle mid-air emergency landing at Bordeaux
Fake German heiress Anna Sorokin is found GUILTY of swindling
Choreographer based his 'trapped' Cinderella prince on royals