IRAN has finally admitted to “unintentionally” shooting down the Ukrainian airliner which killed 176 people after denying responsibility.

The Ukrainian passenger jet came down hours after Tehran launched a barrage of rockets against US targets in Iraq.

Western governments accused Iran of shooting it down but the country denied it, claiming it was a “big lie” that they shot it down.

They said officers mistook the jet as a hostile target after it turned toward a sensitive military center of the Revolutionary Guard.

“The military was at its highest level of readiness,” said their statement, referencing the heightened tensions with the United States.
“In such a condition, because of human error and in a unintentional way, the flight was hit,” it read.

The Iranian military apologized for the disaster, promising to upgrade their systems to prevent such mistakes in the future.

In such a condition, because of human error and in a unintentional way, the flight was hit.

They said those responsible for the strike on the plane would be prosecuted.The jetliner, a Boeing 737 operated by Ukrainian International Airlines, went down on the outskirts of Tehran after taking off from Imam Khomeini International Airport.
Iranian authorities refused to release the black box flight recorders, saying they will “handle” the data themselves.
Iran had denied for several days that a missile caused the crash.

But then the U.S. and Canada, citing intelligence, said they believed Iran shot down the aircraft.

After the crash, bulldozers were pictured clearing away debris at the crash site.

It was feared the machines could destroy precious clues as to what really happened before international crash investigators have a chance to examine them.

Iran’s ambassador to the UK today dismissed the use of bulldozers to clear the crash site as “absolutely absurd”, Sky News reports.

Iran’s acknowledgement of responsibility for the crash is likely to inflame public sentiment against authorities following General Soleimani’s killing.

The beloved general shot down in a drone strike ordered by President Trump was seen as a national icon in Iran.
The crash came just weeks after authorities quashed nationwide protests ignited by a hike in gasoline prices.
“A sad day,” Iran’s Foreign Minister Mohammad Javad Zarif tweeted today.

“Human error at time of crisis caused by US adventurism led to disaster.

The  plane was carrying 167 passengers and nine crew members, including 82 Iranians, at least 57 Canadians and 11 Ukrainians.

Our profound regrets, apologies and condolences to our people, to the families of all victims, and to other affected nations.

Payman Parseyan, a prominent Iranian-Canadian in western Canada who lost a number of friends in the crash, said Iran’s admission was the right step.
“I think the investigation would have disclosed it whether they admitted it or not,” he said. “This will give them an opportunity to save face.”

This comes after Iran claimed the two black boxes found at the crash site had been damaged.

The boxes contain data and cockpit communications from the plane and are meant to be indestructible.

Satellite data detected two surface-to-air missiles being launched just minutes after the Boeing 737 took off, the US government says.

Video footage showed at least one of the rockets streaking across the night sky in Tehran – before the jet explodes in a fireball killing all 176 people on board.

The explosion took place near the last known position of the Ukraine International Airlines plane over Parand, southwest of Tehran, at 6.14am on Tuesday. 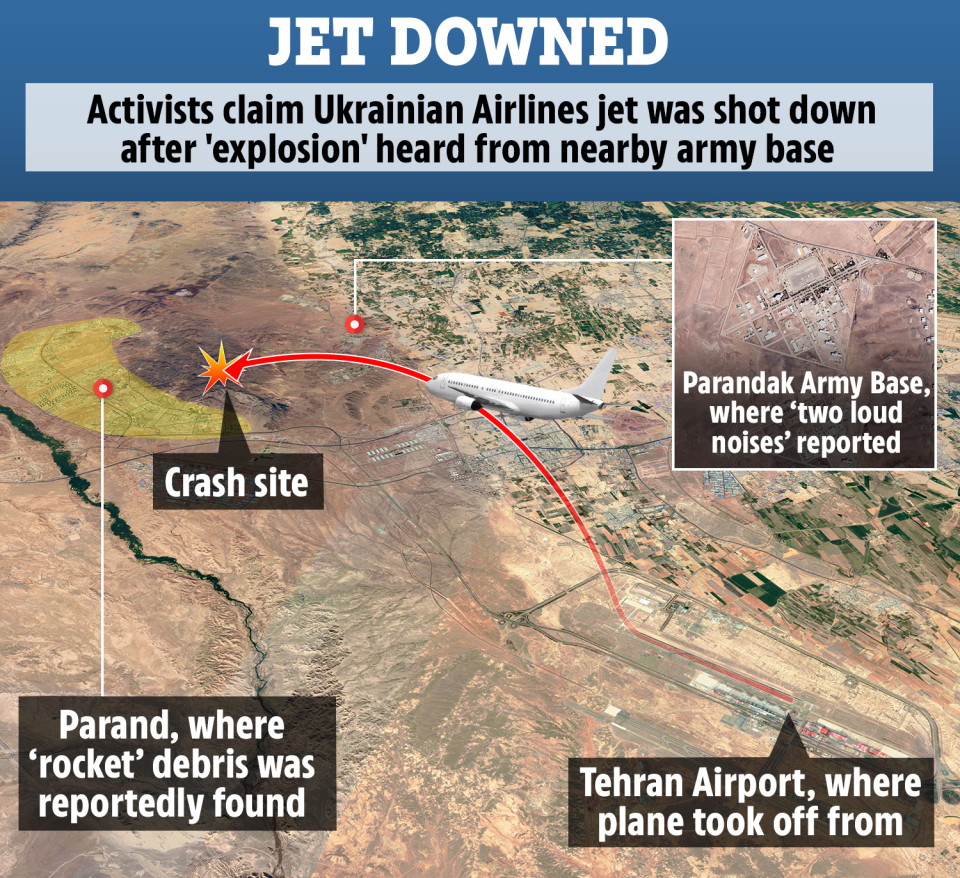 Iran continued to deny it shot the plane down until finally admitting their involvement in the crash on Saturday morning.

An earlier video taken from the security camera on a house shows a huge explosion on the ground and debris flying past the camera.

After US spies told him the plane was shot down, Donald Trump said: “Somebody could have made a mistake”.

Previously, Government spokesman Ali Rabiei denied it on state TV, describing any claims to the contrary as “psychological warfare against Iran.”

Unverified pictures earlier shared on social media claim to show parts of an anti-aircraft missile allegedly found near the crash site in Parand.

It is similar to the nose cone of a Russian-made Tor surface-to-air missile.

‘WORLD AT HIS FEET’

Twins born in different DECADES – and their parents are left ‘speechless’

Girl, 2, left with permanent brain damage after being hit by Cubs foul ball

Russia delivered 29 Tor-M1s to Iran in 2007 as part of a $700million contract signed in December 2005.
Iran has previously displayed the missiles in military parades.

Others claiming to live nearby said they heard loud noises coming from Parandak army base at around the time of the disaster.

GOT a story? EMAIL exclusive@the-sun.com