A couple marched their 18-year-old daughter to the doctor for a ‘virginity check’ and warned her secret boyfriend they were ‘dangerous’ because they were Muslim, a court heard.

Iranian parents Mitra Eidiani, 42, and Ali Safaraei, 56, who live in south London, are also alleged to have threatened to kill their daughter Sophia Safaraei and her boyfriend.

In a statement read to Kingston Crown Court today, Doctor Helen Lewis said that Ms Mitra had responded to her refusal to carry out the check by telling her she did not understand her and Mr Safaraei’s culture.

‘Sophia said she didn’t want to be examined by anyone,’ the statement read.

‘I explained to Sophia I could not even touch her without her permission and I would not examine her unless she consented to this.

‘Mitra voiced unhappiness with this. She said I didn’t understand her culture and then called Sophia’s father, Ali Sarafaei, who was waiting outside.

‘She told me he was strict, not liberal like her, and would insist on me performing a virginity test.’

Doctor Lewis said the Ms Eidiani then drew unfavourable comparisons between her family’s culture and ‘your’ culture (referring to the UK) as Mr Safaraei threatened to go to the police while Sophia appeared tearful.

The jury heard Sophia told police she was from a ‘strict Muslim family’, but defending Eidiani, John Skinner said that ‘was not really true’.

Sophia said ‘it was more of their upbringing than mine’, adding: ‘There’s more of the culture than religion’.

The mother allegedly later bit her daughter and the father is accused of threatening Sophia with a kitchen knife after returning from the doctor.

Sophia was also told she would be sent ‘back to Iran to marry a cousin,’ jurors heard.

The parents found out college student Sophia was in a relationship with her workmate Bailey Marshall-Telfer, 18, when the pair were caught meeting secretly at her home.

The couple then visited Mr Marshall-Telfer at work, where Eidiani suggested ‘that they, as Muslim people, were dangerous’, the court was told. 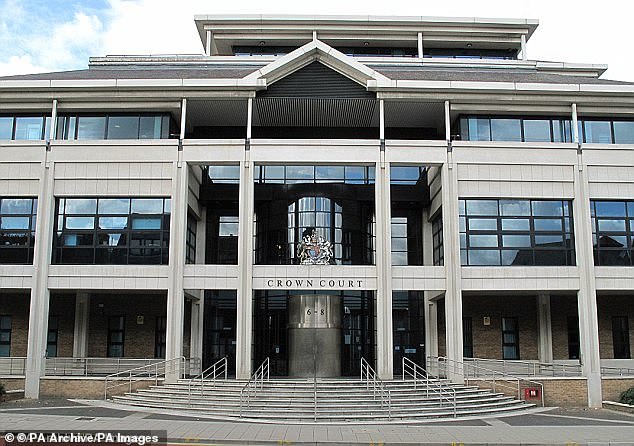 He initially tried to climb from a bathroom window but she discovered some of his belongings, including a pair of headphones, the jury heard.

Eidiani wept as Sophia told the jury: ‘We panicked because we didn’t expect it to happen so I had no choice but to tell him to go on the roof.

‘We were both scared, we didn’t know what to expect and obviously it would be a shock for my mum. She did tell him not to come back and we should not have contact anymore. She did break his headphones and Bailey was shocked when he saw them.’

Mr Povall said after Eidiani broke the headphones, she told Mr Marshall-Telfer: ‘That’s the least way I can cause you some harm’.

He added: ‘She shouted, she was threatening, she took a photograph of him and she insisted that he leave the house.’

Mr Povall said Sophia’s father then returned home after the boyfriend had left.

He added: ‘Sophia describes hearing from inside her room her mother begging her father, “please, don’t hurt her”. 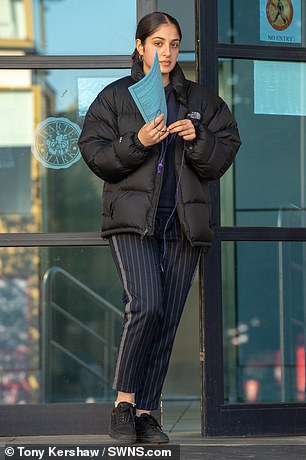 ‘But in any event, her father came up to the room shouting at her angrily, telling her that he would kill her and insisting that he and his wife should take Sophia to the doctor so that it could be checked whether she was still a virgin.’

Sophia told jurors: ‘I did get threatened – that if I didn’t go, stuff like I can get killed.

‘The doctor asked me the reason why I was in that day and I didn’t talk, I just told my mum, as they were the ones that wanted me to get checked. They said “if she wants to get checked she has to say herself”.’

Mr Povall added: ‘This led to Ali Safaraei coming into the consultation room himself in order to see if this could be made to happen.

‘The doctor was adamant, rightly, and in due course the family left without Sophia having been violated in this way.’

But when the family returned home from the doctor, her mum became ‘extremely angry’ and bit Sophia, the jury heard.

Mr Povall said: ‘She started to shout, she grabbed hold of Sophia’s arm and she bit her in the arm, leaving a distinctive bite mark on her forearm.

‘Both parents were pushing her around. Sophia said she was going to leave home and went up to her bedroom.

‘But her father came up, this time holding a knife from the kitchen and a pair of scissors.’

Speaking from behind a screen, Sophia told jurors: ‘My father then came into my room armed with a big kitchen knife and said you have to get checked. They were saying if I’m a virgin why can’t you prove it? What are you scared of?’

A photograph of a large yellow bruise on her forearm, allegedly caused by the bite, was shown to the jury.

In the following days, the parents made life ‘extremely unpleasant’ for Sophia and Mr Marshall-Telfer, Mr Povall said.

He said: ‘She was called a prostitute, her father threatened to kill both her and Bailey. She was told she was disowned, it was suggested she might be sent back to Iran to marry a cousin.’

On May 17 2018, Mr Marshall-Telfer was threatened by Eidiani while at work at a Sports Direct store near Clapham Junction, where he had met Sophia, the court heard.

Safaraei then showed up and said ‘he was going to keep coming back and when the time and the place was right he would kill Bailey’, Mr Povall said.

Sophia reported the alleged abuse on May 18 at Wimbledon police station. Safaraei and Eidiani, both of Clapham, deny two counts of controlling or coercive behaviour and one count of making a threat to kill.

Eidiani also denies one count of assault occasioning actual bodily harm. Eidiani pleaded guilty to one count of criminal damage, related to the headphones, at an earlier hearing.

Parveen Mansoor, representing Safaraei, told the court he is not a Muslim and ‘would have been fine’ about his daughter having a boyfriend. The trial continues.

Britain is not 'first in line' for a post-Brexit U.S. trade deal, White House says
How a spray can smaller than your iPhone gives you streak-free colour in seconds
Ashes star Ben Stokes is pictured with his school cricket team
Prince Albert's cruel notes to Queen Victoria shatter their mythic love story
Baroness Karren Brady in court to support her millionaire father over £1.5 million unpaid bill
Wanted: Live-in 'dog carer' for six-storey Knightsbridge townhouse to keep golden retrievers happy
British mother Nazanin Zaghari-Ratcliffe 'could be home very soon' says husband
Pre-orders begin for Apple's $749 iPhone XR (but you'll have to wait a week to pick it up)