A senior Iranian politician has called for a referendum on compulsory hijab, sparking protests across the staunchly Muslim country by women demanding the law is removed without a vote.

Ali Motahari, the deputy speaker of Iran‘s parliament, demanded a nationwide vote on the hijab, adding that he was positive the country would vote for the law to stay.

The head scarf has been a mandatory dress requirement for women in Iran since the Islamic Revolution in 1979.

There has been no indication if the call for a referendum will be turned into an official proposal, and if so, when the vote would be held.

Resistance against the forced hijab is not a new phenomenon, but the movement has picked up speed in the past year, with activists encouraging women to take their headscarf off and post their protests on social media.

After Motaharis call for a national vote on the hijab, women expressed their outrage at his suggestion that men should once again have a say in how they dress.

Video footage from one such protest shows two women on what appears to be a motorbike or moped, not wearing hijabs under their helmets.

‘No headscarf, I am the leader, you are the leader! Let’s shout for freedom,’ they chant as they wave their scarves.

‘Our basic rights about our bodies can’t be decided by others through a referendum’. 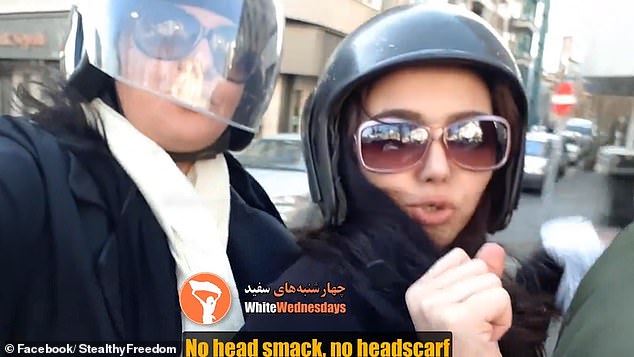 Protest: Women took to the streets after it was suggested in Iranian parliament that there should be a referendum on whether to keep the law on Islamic dress code 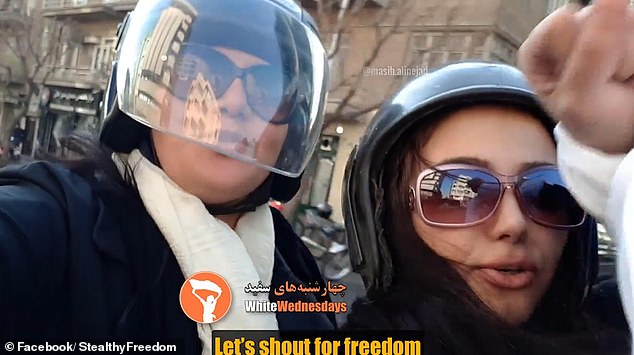 Shouting for freedom: One video shared online shows two women on a motorbike or moped, having removed their hijabs from under their helmets 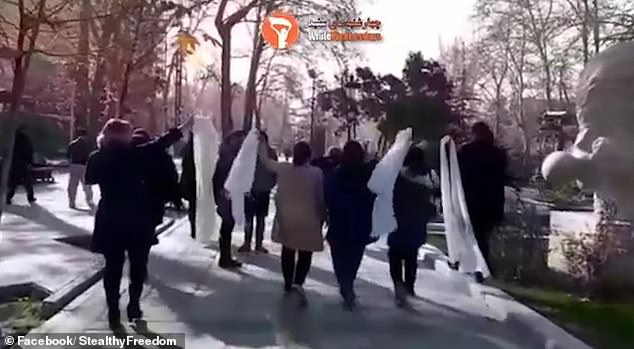 United: Another clip shows a group of women walking through a park without headscarves

Another shows a group of women walking through a park, and all taking off their hijabs in public as one.

The video, shared by women’s rights campaigners My Stealthy Freedom, sees them walking down a down the wide path holding their scarves in the air.

‘Women got braver and they practice their civil disobedience everyday, they became their own leader and women went beyond compulsory hijab and in their daily protest they are asking for religion to be separated from politics.

‘That is why all the clerics and Islamic republic officials panicked.’ 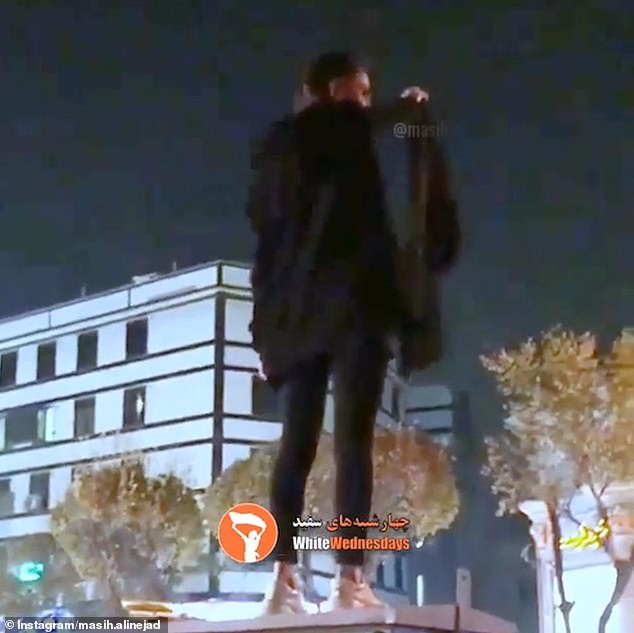 Standing tall: A woman is filmed while standing on a box, holding out her headscarf, which has been compulsory for women in Iran since the Islamic Revolution of 1979

The Islamic dress code, in place since the 1979 revolution, considers veiling obligatory for any female above 13 in Iran and says they should cover themselves from head to toe while disavowing any figure-hugging dress.

President Hassan Rouhani, who came to power in 2013 promising a more moderate stance, has previously said it is not the job of police to enforce religious rules such as those forcing women to cover their hair.

But in April 2016, officials said there were 7,000 undercover morality police reporting on things like ‘bad hijab’ – a blanket term usually referring to un-Islamic dress by women.

Figures are rarely given, but Tehran’s traffic police said in late 2015 they had dealt with 40,000 cases of bad hijab in cars, where women often let their headscarves drop around their necks.

These cases generally led to fines and a temporary impounding of the vehicle.

Mum-of-nine Brexiteer emerges as frontrunner for Bank of England top job
JACK DOYLE: Principled? No, the hard Brexit mob just want to burn the house down
Don't let the short life of baby Begum baby be used in a blame game
Oil firm on Iran sanctions, but rising US supply and...
Man dies after falling from a height inside a Canary Wharf shopping centre
Woman, 43, claims BEER triggered her eczema
Female geography teacher, 46, who had a sexual relationship with a 15-year-old banned from classroom
Instagram goes wild for Huda Beauty foundation after cystic acne sufferer shares before and after