THERESA May has survived a vote of no confidence in the Commons – meaning she has clung on as PM for a little while longer.

But she suffered the worst defeat in British history last night when her MPs voted to kill off her Brexit deal. 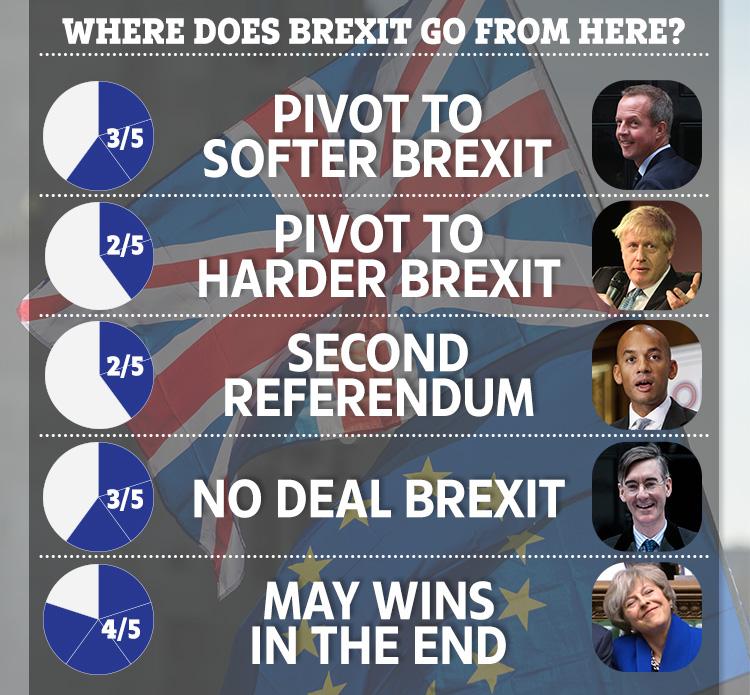 She has kept her Plan B secret so far – but after losing she will have to come clean about the next steps within three days.

Tonight she confirmed she would be inviting Jeremy Corbyn and other opposition leaders to Downing Street for talks – but the Labour boss has already said he probably won’t go.

He wants her to rule out a No Deal Brexit first, something she’s unlikely to.

A massive defeat on Brexit sees the PM’s rivals scrambling to take advantage – with critics on all sides keen to force their preferred outcome.

So what happens next, and how will this all end? Here are the most likely (and unlikely) outcomes…

A cross-party group of MPs are frantically pushing an alternative Soft Brexit plan which could replace Mrs May’s deal.

That would mean the UK staying in the EU’s single market.

It would be welcomed by big business – but Brexit voters would be unhappy because it would mean Britain accepting open borders, and following European rules without a say.

One possible mechanism for the plan is a bill tabled by Mr Boles giving control of Brexit to the Commons “Liaison Committee” of senior backbenchers.

Most of the Tory Brexiteers who oppose the PM’s deal want her to return to Brussels and strike a tougher line.

The likes of Boris Johnson and Dominic Raab wrote a letter this week urging Mrs May to offer the EU an ultimatum.

They are adamant that Britain can secure a “Canada Plus” trade deal allowing us to abandon most European regulations.

Dozens of MPs are hell-bent on forcing Mrs May to hold a second referendum so Britain can stay in the EU.

It would require Article 50 to be delayed to allow time for the referendum to be held some time in the spring.

Yet without the support of the Government it’s unlikely the second vote could become a reality.

DEAL OR NO DEAL?

If Mrs May’s deal fails, the legal default is that we will leave the EU without a deal on March 29.

A number of Brexiteers now regard this as the best option and are opposing the withdrawal agreement on those grounds.

Despite the legal position, the majority of MPs insist they will take any measure necessary to rule out No Deal.

Last week they approved a motion which blocks the Government from spending money preparing for No Deal, and they would almost certainly table further such votes over the coming weeks.

Cabinet ministers remain adamant that a version of Theresa May’s plan will eventually pass the Commons, even after she lost tonight.

They believe sceptical MPs will lose their nerve as Brexit Day approaches – terrified of either No Deal or a second referendum.

The PM was recently encouraged by a chat with Angela Merkel where the German leaders suggested more concessions could be possible.

Thanks to an amendment masterminded by Dominic Grieve, she will have just three days to reveal her next steps.

Based on past experience, the most likely outcome is that she will stubbornly plough on with a version of the current deal regardless of the scale of her defeat.

A second vote on the withdrawal agreement could then take place as early as next week – or as late as March.