The Chancellor is said to have told friends he accepts he is on his way out of the government and is determined to deny Mr Johnson the satisfaction of sacking him. 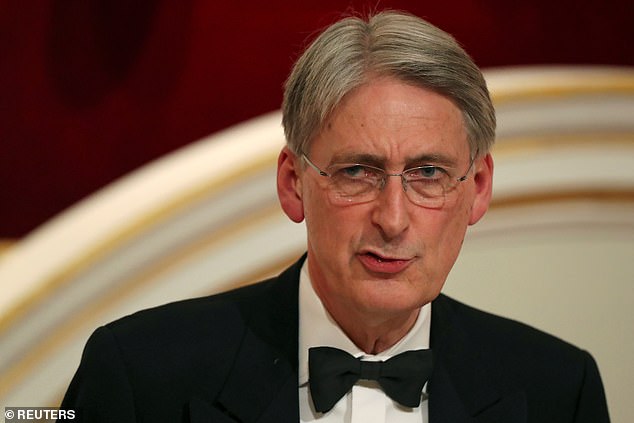 A Treasury source insisted Mr Hammond, currently in Paris ahead of a G7 summit, had not yet decided what to do when Theresa May steps down on Wednesday.

Mr Hammond hinted at the move earlier this week, telling the US network CNBC: ‘I will not continue in this role in the new government.’

He suggested he would lead the fight against a no-deal Brexit from the backbenches, saying: ‘I want to work with the new prime minister, so long as they are focused on doing things that will strengthen the UK economy and make it resilient in the future I will be fully supportive.

‘If the new Government tries to drive UK over a cliff edge called no-deal Brexit I will do everything I can to stop that.’

Meanwhile the Chancellor yesterday launched an attack on Jacob Rees-Mogg, who claimed in the Telegraph that No Deal could boost GDP by £80billion a year.

The Chancellor hit back, tweeting that it was ‘terrifying’ that someone so close to Mr Johnson would think trade barriers were a good idea.

Writing on Twitter, Mr Hammond said: ‘Happy to debate scale of negative impact of No Deal on the economy – but terrifying that someone this close to a potential future government can think we’d actually be better off by adding barriers to access to our largest market.’