A French woman who is accused of acting as an ISIS ‘matchmaker’ is among a group of female foreign fighters being deported from Turkey to France.

French national Tooba Gondal, 25, who studied at Goldsmith’s University in London and lived in Walthamstow, claimed that she had permanent British residence but the Home Office issued her with an exclusion order last November.

France’s Centre for Analysis of Terrorism told the Times Newspaper today that Gondal was being expelled to France as part of Ankara’s plan to rid Turkish prisons of jihadists.

French national Tooba Gondal (pictured left in 2015), 25, identified herself previously as a British-Pakistani woman born in France, but with permanent British residency. She was issued a Home Office exclusion order last year, which bars her from ever returning to the United Kingdom. She is reportedly in the process of being transported from a Turkish prison to her native France. Right image shows Gondal in the Ain Issa camp, Raqaa, Syria earlier this year

On arrival in her native France, Gondal will be imprisoned and her children will be taken from her and placed in foster care.

She is among four women and seven children who are being expelled from Turkey.

The 25-year-old is accused of being one of the top recruiters of females to the ranks of ISIS. Known as a ‘matchmaker’, she allegedly arranged the marriage of Shamima Begum who fled her Bethnal Green home for Syria in 2015.

Last month, Gondal wrote an open letter to the Sunday Times from the Ain Issa camp in Raqaa, northern Syria. 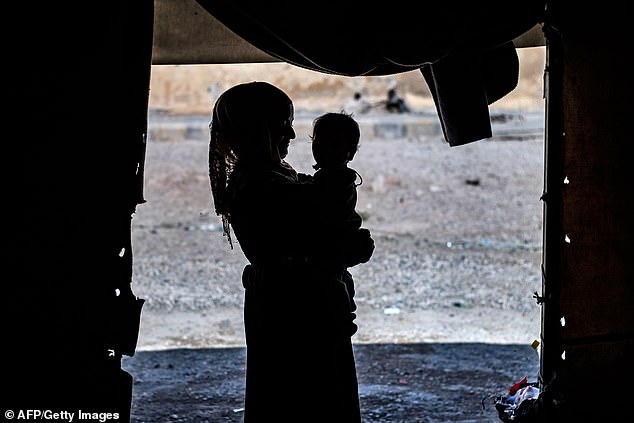 Pictured: A volunteer caretaker holding one of 24 orphaned children reportedly linked with foreign fighters of ISIS, is silhouetted at a camp in the northern Syrian village of Ain Issa, in September. Gondal was stuck at the Ain Issa camp in Raqaa but Turkey’s incursion into northern Syria gave her an opportunity to escape into Turkey. She was later arrested Pictured: Wreath and flowers have been laid by a commemorative plaque set outside the Bataclan concert venue today. This year is the fourth anniversary of the terror attacks of November 2015, in which 130 people were killed. After the attacks, Gondal tweeted: ‘Wish I could have seen the hostages being slaughtered last night with my own eyes’

‘I desperately wish for the British government to take us back. I want to prove that I am a changed person; a much better individual for society. I offer to help prevent vulnerable Muslims from being targeted and radicalised,’ she said.

Turkey’s incursion into northern Syria caused chaos and she was able to escape into Turkey, where she was later arrested.

Gondal’s son Ibrahim is entitled to British citizenship because his father – who was killed in a suicide bombing in Iraq – was from the UK.

In online rants before the fall of the so-called caliphate, Gondal called Britain a ‘filthy country’ and praised the 2015 terror attack on the Bataclan theatre in Paris.

African American death row inmate who argued he was falsely convicted by a racist juror dies
'Materialistic' mother, 38, drowned children then deliberately crashed
Horse dies after racing accident at Santa Anita track, the 23rd fatality in just over three months
Health Secretary Matt Hancock faces an investigation into whether he has been paid by Babylon app
Royal biographer Andrew Morton on Meghan's desire to become Diana 2.0
R. Kelly's TWO girlfriends are evicted from his Trump Tower home in Chicago after his arrest
Holiday terror for British family in Spanish resort when fire alarms failed as they were evacuated
Indian authorities will struggle to recover the body of American missionary John Allen Chau