Italy‘s government stood defiant yesterday after Brussels ordered it to rip up its budget.

EU bosses have taken the unprecedented step of rejecting Rome’s financial plans for next year, escalating a weeks-long standoff.

Brussels has given Italy three weeks to rework its numbers to bring the country into line with EU spending rules. 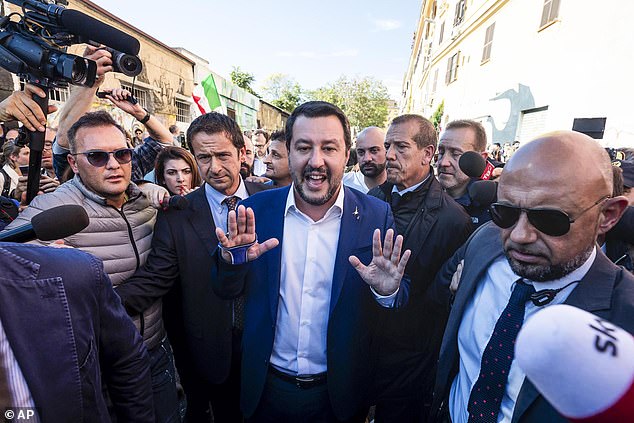 Matteo Salvini, the country’s deputy prime minister, said there is ‘no way’ he will cut funding for health, disability and education

It is the first time the bloc has used the strict rules to refuse a national budget since they were introduced in 2014.

But yesterday Matteo Salvini, the country’s deputy prime minister, dug his heels in. He said: ‘They want us to cut the funds for health, for disability, for the right to education. There’s no way. If they continue inflicting random blows, it makes me want to give the Italian people more money.’

Prime minister Giuseppe Conte also boasted of the ‘robust’ Italian economy during a visit to Moscow. He said: ‘Let’s be certain that the fundamentals of our economy are strong, our economy is robust and we only need to go forward. The government will do its part.

‘We are the second manufacturing power in Europe, we are probably the country which has the strongest fabric of micro and small businesses, and we are proud of this.’

Italy’s coalition government wants to run a deficit of 2.4 per cent of its GDP – three times more than targeted by the previous government – to fulfil spending pledges made during the election earlier this year.

But Brussels believes the country’s plans could result in the deficit creeping closer to a rules-busting 3 per cent. Italy says it needs about £15 billion to fund promises including tax cuts, a universal basic income and pension changes. 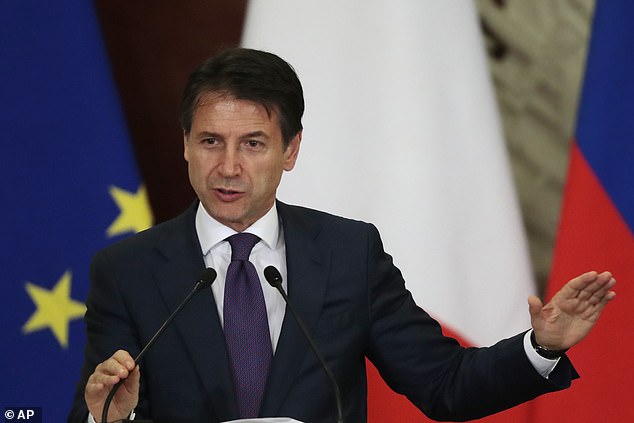 However, this would contribute to the country’s huge debt pile, which at 130 per cent of GDP is the biggest in the eurozone area behind Greece. It is also more than double the bloc’s limit of 60 per cent.

Announcing the measures in the European parliament on Tuesday, the EU’s budget chief, Pierre Moscovici, said: ‘The opinion adopted today by the Commission should come as no surprise to anyone, as the Italian government’s draft budget represents a clear and intentional deviation from the commitments made by Italy last July.

‘However, our door is not closing, we wish to continue our constructive dialogue with the Italian authorities.’

Italy’s government has until November 14 to respond with revised plans.

But Mr Conte said there was no Plan B for the budget and he would find it ‘difficult’ to make any changes.

Expert warns diets are contributing to Britain's obesity epidemic
Trump spoke to teen group in front of presidential seal DOCTORED with Russian eagle and golf clubs
Privately-owned cars should be BANNED from London by 2030, says pro-Corbyn think tank
Millions of Britons party into the night as fireworks signal the start of a new decade
RUTH SUNDERLAND: The Debenhams downfall should teach a lesson
Coronavirus UK: Patient zero 'is Sussex IT worker, 50
PICTURED: U.S. military contractor whose death in rocket attack could spark WW3
Frank Lampard 'honoured' as he is inducted into Legends of Football Hall of Fame