A talented craftsman who turns military uniforms into beautifully upholstered chairs receives requests from all over the UK – including from Britain’s most injured soldier.

Dougie Smith, 50, has been inundated with orders to make the bespoke furniture for former servicemen since he created his first masterpiece.

The father-of-two, from Saffron Walden, Essex, made a wingback armchair for a former Lance Bombardier who lost both his legs while serving in Afghanistan. 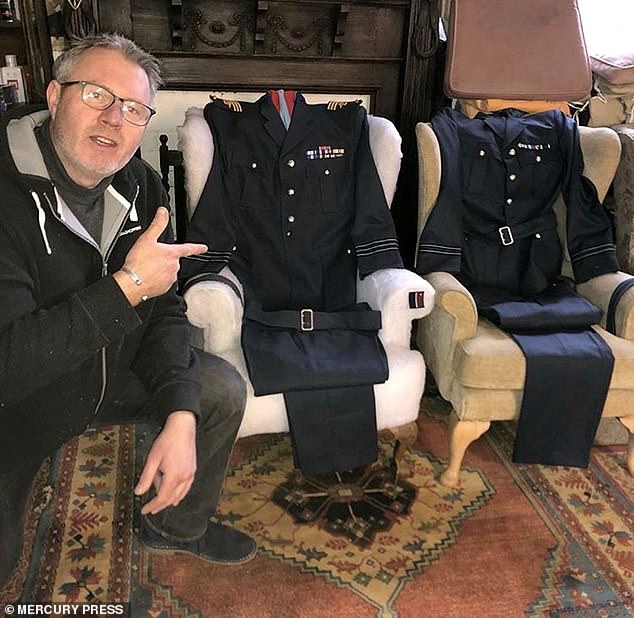 Dougie Smith, 50, from Saffron Waldon, Essex, turns military uniforms into beautifully upholstered chairs receives requests from all over the UK – including from Britain’s most injured soldier

Mr Smith, who has been upholstering furniture for over 30 years, has since transformed eight chairs for RAF Wing Commanders and Flight Squadron Leaders and has a backlog of more excited customers.

But the self-employed businessman said his greatest honour was upholstering the Black and Red stripe No1 mess-dress and Khaki No2’s uniform of the Afghanistan veteran dubbed Britain’s most injured soldier, Lance Bombardier Ben Parkinson MBE, in July.

The 34-year-old lost both his legs and suffered a broken spine and pelvis when his vehicle hit a landmine in Afghanistan in 2006.

Mr Smith said: ‘I’ve been upholstering since I was teenager – there’s not many things I haven’t done or that I can’t do.

‘The response since I did the first one last year has been phenomenal, I never expected that it would blow up like this.

‘My greatest achievement and honour has to be upholstering the uniforms of Ben Parkinson, who we surprised by turning his Black and Red stripe No1 mess-dress uniform into a chair as a gift for all the charity work he does.

‘He had asked us to do his Khaki No2’s uniform so that he could auction off the chair for the charity Pilgrim Bandits. I felt quite emotional to be able to gift the second chair to him and meet him in person.

‘It all started because a former staff sergeant from the barracks near where I live asked us if we could use his uniform to create a chair, so we took it on and sent it out to them in Australia, where they had relocated to. 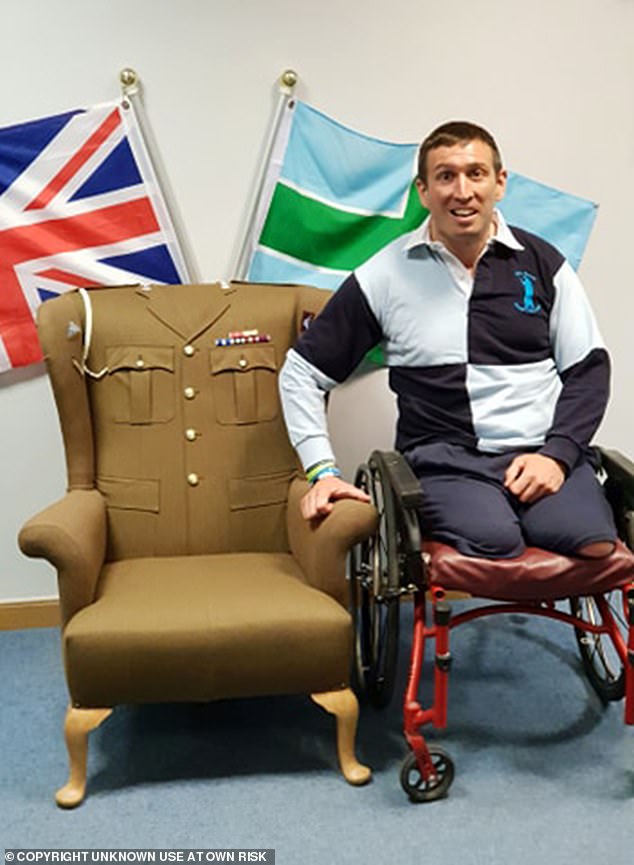 The father-of-two made a wingback armchair for former staff sergeant Ben Parkinson, who suffered a broken spine and pelvis when his vehicle hit a landmine in Afghanistan in 2006

‘I posted pictures of the chair on our Facebook page and it’s been crazy ever since.

‘I’m on my eighth chair at the minute but there’s many more customers waiting.’

Although a talented craftsman, it takes Mr Smith several weeks to complete a customer’s chair and depending on size and specific design requests he may even need two uniforms to complete the job.

He enlists the help of his son, Lee, 29, his fiancee, Nicola Marsh, 47, his mother, father and their partners – Cherry Barnes, 70, Barrie Barnes, 67, Eddie Smith, 72 and Gill Smith, 70 – who all help to source and collect the chairs as well as offering a hand in his workshop.

But despite the long and laborious work they require, Dougie says the end result is worth it and believes he has found his most rewarding line of bespoke lounge furniture yet. 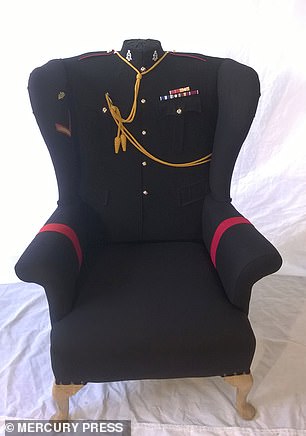 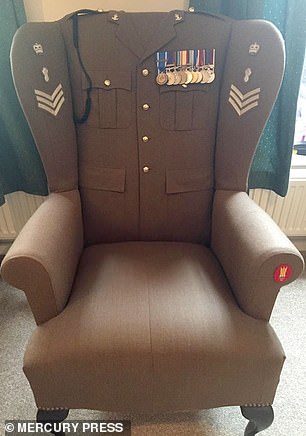 The self-employed businessman said his greatest honour was upholstering the Black and Red stripe No1 mess-dress and Khaki No2’s uniform of the Afghanistan veteran Ben Parkinson MBE, in July 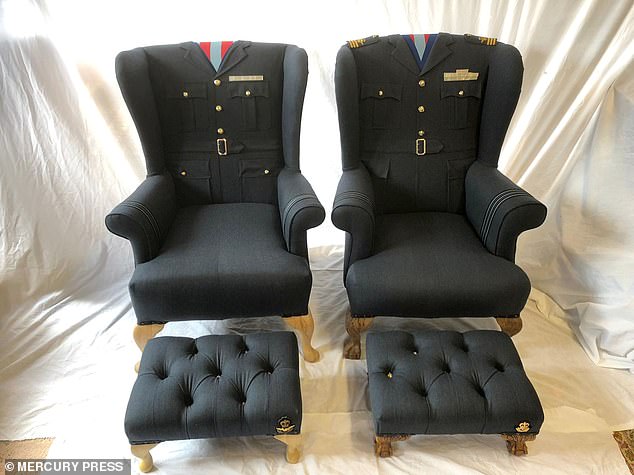 Another two of the chairs made by Mr Smith, who says he is ‘honoured to be trusted’ with veterans’ ‘prized possessions’

He said: ‘The uniforms that we are getting sent are so beautifully made, it takes a lot of time unpicking all the material by hand and getting it flat on the workshop bench to see what we’re working with but the material is so strong and sturdy it works brilliantly for upholstering something.

‘Some people have said that the buttons and all the medals might make the chairs uncomfortable but when you actually sit down in them they’re so soft that the buttons sink in and you don’t even notice them.

‘I feel very honoured to be trusted with these prized possessions which I’m sure hold many memories, good and bad, so I source the chairs and stock them for the commissioned work on their uniforms, its a great pride and honour to have that trust from these people

‘It’s really lovely to see how pleased people are with the finished products, we get sent pictures of them set up taking pride of place in the customers’ homes and it’s lovely seeing them out on display for people to see, these uniforms are so beautiful they shouldn’t be hidden away in a wardrobe.’

BBC admits 3,000 radio staff could be hit by massive tax bills after being caught in HMRC probe
Inside UK's first coronavirus mega-hospital
Lyra McKee funeral: Priest gets standing ovation for asking why it took tragedy to unite politicians
Bomb threat forces Air India flight from Mumbai to New York to land in Stansted
Passenger screams ‘Allahu akbar’ as he is dragged off Paris-Tunisia flight
Alex Salmond tells his trial he 'wishes he had been more careful with people's personal space'
MailOnline readers share the coronavirus 'essentials' they're stockpiling
England World Cup hero Jordan Pickford throws £50,000 party to reveal he's having a baby boy