At yesterday’s 8.30am meeting of senior Downing Street strategists, the mood could hardly have been bleaker.

Theresa May was, according to one ally, ‘staring down the barrel of a gun’.

The Prime Minister had promised to come back to the Commons with a new deal for MPs to vote on today.

But over the weekend, the talks had failed. The PM’s plane had sat on the runway at Northolt, fuelled and ready to go, but there was nowhere to fly to and nothing to sign off.

The PM was in a bind. She could hardly present to MPs the exact same withdrawal agreement which was voted down by a historic margin of 230 votes less than a month earlier. That would be a humiliation. But she had promised a meaningful vote, and pulling it would spark uproar. 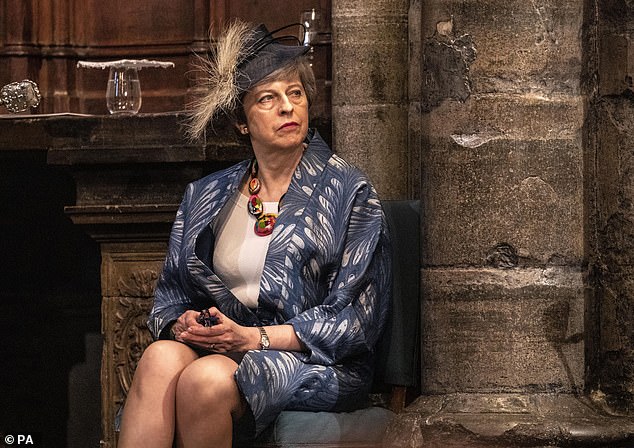 4.15pm – Prime Minister Theresa May looking glum shortly before she gives a reading at the Commonwealth Service at Westminster Abbey, London

Mrs May had also promised – after a rebellion by Remainer ministers – two further votes, one on leaving without a deal and another on extending Article 50. However MPs were whipped, these votes were guaranteed to plunge the Tory party into a new and brutal civil war.

There was chatter among MPs that Mrs May could even call a general election to avoid the votes. With nothing to say, No 10 imposed a ministerial media blackout. Brexit Secretary Stephen Barclay entered Downing Street just after 10am and was there for nearly two hours, apparently working on a statement due to be made to Parliament in the afternoon.

At the morning briefing of lobby journalists, Downing Street confirmed the meaningful vote would be going ahead, but could not say what the vote would be on. 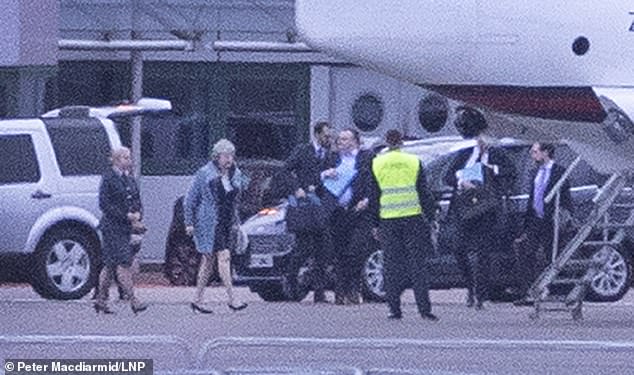 5.50pm – Downing Street staff cross the tarmac with Mrs May to a plane at RAF Northolt to fly to Strasbourg for last minute talks with EU leaders ahead of the crucial Brexit withdrawal vote in Parliament later today

It was clear the talks were in trouble last week, when Geoffrey Cox, the Attorney General, returned from Brussels empty-handed. But over the weekend, negotiations continued.

By Sunday they were ‘sick of the sight of each other’ one source said, and any hope of a breakthrough appeared to have disappeared.

Yet at one point they were clearly close. EU ambassadors were told yesterday that Mrs May had suggested the additional legal assurances being offered over the Irish border backstop were good enough. 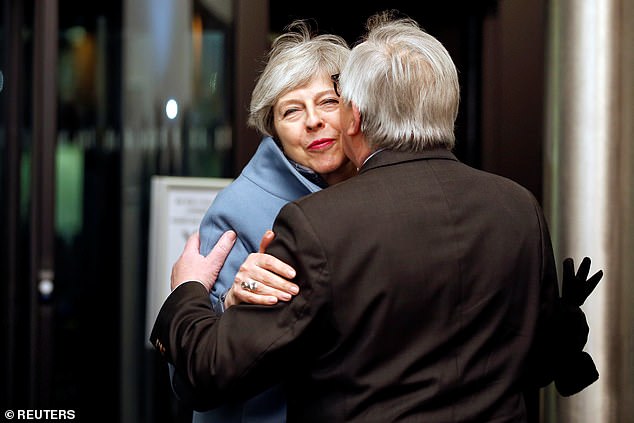 8.20pm – Mrs May brightens up as she is greeted by Jean-Claude Juncker alongside Michel Barnier at the European Parliament building in Strasbourg yesterday evening

But they did not satisfy Mr Cox. In an interview in a Sunday newspaper – conducted earlier in the week – he had made clear he would not rewrite his legal advice unless he was absolutely convinced the new deal meant the UK could not be trapped in the Northern Ireland backstop.

‘I will not change my opinion unless we have a text that shows the risk has been eliminated. I would not put my name to anything less.’

‘I have been a barrister for 36 years, and a senior politician for seven months,’ he insisted. ‘My professional reputation is far more important to me than my reputation as a politician.’

On Sunday afternoon, at a conference call with Mrs May, Mr Barclay, and Mrs May’s chief of staff Gavin Barwell, the Attorney General made it clear he was still not satisfied. The PM phoned EU Commission President Jean-Claude Juncker on Sunday night to tell him the deal was off. 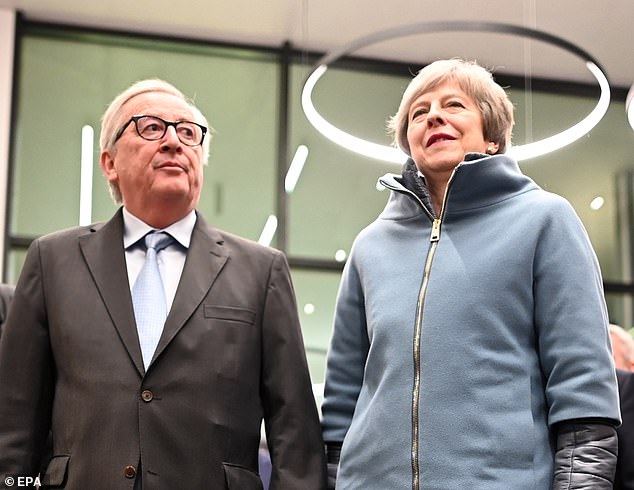 One diplomat familiar with the briefing said: ‘The legal assurances, the further clarifications that were being offered were just not enough for Prime Minister May to get it through her Cabinet.

‘It was said that they had reached common ground and she wanted to sell it in Downing Street to her Cabinet, but she realised she did not have the support of her ministers.

‘She called Juncker and said “my ministers don’t back it”.’

The two leaders agreed to ‘keep the show on the road’ and officials began talking again yesterday morning. 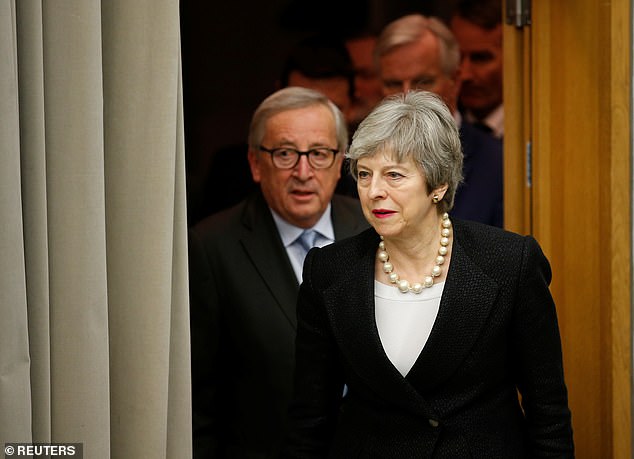 The leaders attended a pres conference after their meeting to confirm that their had been an agreement over the backstop only being ‘temporary’. Mr Juncker again denied that their would be anymore negotiations over the UK-EU deal when asked by a journalist

There were reports Mrs May was considering pulling the votes, to the fury of MPs.

Former Tory minister Nick Boles, one of the leading opponents of No Deal, wrote on Twitter that he was ‘sure’ the PM would honour her promises, adding – in a clear threat – ‘If she doesn’t she will forfeit the confidence of the House of Commons.’

Mr Boles, along with another former Tory minister Oliver Letwin and Labour’s Yvette Cooper, were ready to move. An alliance of Labour MPs and Tory rebels would try to seize control of the Parliamentary timetable and force Mrs May to extend Article 50.

Meanwhile, potential candidates for the Tory leadership continued their public peacocking. Dominic Raab, the former Brexit secretary, made a thinly disguised leadership pitch with a speech on social mobility to a think tank. Asked if he wanted to be Tory leader, he replied: ‘Never say never.’ 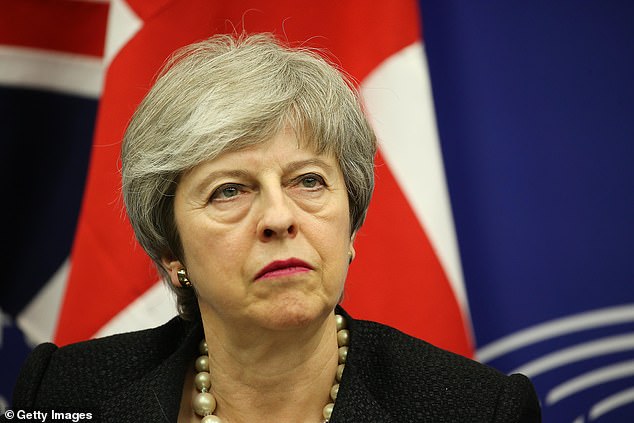 A second call from Mr Juncker at lunchtime was a sign of progress, but when, shortly afterwards, Irish ambassador Simon Coveney suggested Mrs May would by flying to Strasbourg last night, this was news to those in No 10. Mid afternoon, Mrs May gave a reading at Westminster Abbey at a service to mark Commonwealth Day. The passage from 1 Corinthians could have been a plea for Tory unity. ‘The body does not consist of one member but of many… If one member suffers, all suffer together with it; if one member is honoured, all rejoice together with it.’

Talks were still going on to finalise the deal as Mrs May left Downing Street shortly after 5pm to board the Royal Flight. One senior source said it was ‘not impossible they [the EU] say no’ on landing.

Assuming they don’t, the deal faces two further hurdles today. First the DUP, the Northern Irish party whose veto would surely be its death knell. One Cabinet source last night said they were keen to ‘find a way out’.

Second is the European Research Group of hardline Eurosceptics, which has set up a ‘star chamber’ of senior lawyers to pass judgment on what has become known as ‘Cox’s Codpiece’.

Mrs May will hope to peel off enough MPs to get the deal over the line. But if it fails, she will have nowhere to turn.

As one senior adviser put it. ‘This is our last roll of the dice.’