The transgender equality agenda has advanced through Britain’s institutions with extraordinary speed. In a few years, promoting ‘trans rights’ has become central to healthcare, policing, education and the law, raising many troubling questions.

The only thing more extraordinary than the rapid spread of this new orthodoxy is how little scrutiny it has faced and the aggressive intolerance directed towards those who question it.

During a Westminster career which began as a junior Commons researcher 25 years ago, I have never encountered a movement that has spread so swiftly and successfully, and has so fiercely rejected any challenge to its orthodoxy.

The lack of scrutiny has led to a new disturbing reality in which women have been sexually assaulted in prison by trans inmates, trans athletes increasingly compete as females, children transition rapidly, and women suffer vitriolic abuse for standing up for their rights. 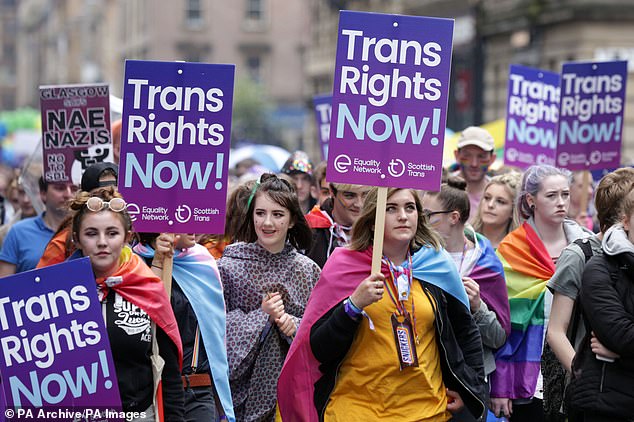 Possibly the most troubling aspect of this story is how so many politicians have failed to challenge a movement whose agenda they know can infringe on the rights and freedoms of others.

By looking the other way and keeping quiet, MPs have allowed a small group of activists to set the agenda and even write policies, without anyone ever consulting or even informing the public.

Last week, however, there were encouraging signs that common sense is entering the debate. That is long overdue and much needed. Perhaps the most significant sign that there has been a shift in the debate is the division around LGBT group Stonewall.

It has been instrumental in lending legitimacy to the trans agenda, bringing lobbying skill, financial clout and moral force to bear: after all, what decent person wants to be accused of intolerance by champions of gay equality?

Stonewall has been pushing for a change in legislation to allow people to self-identify their gender. In other words, any man could legally become a woman (and vice versa), without the need for verification from medics.

But this has been contentious within LGBT circles and it appears the trans lobby’s hold on Stonewall might just be weakening. Some donors are deserting, the CEO has quit and leading gay equality campaigners are going public with their doubts about its adoption of the trans agenda.

Even Simon Fanshawe, a co-founder of the group, has condemned its ‘extreme’ position following its campaign to amend the Gender Recognition Act.

Meanwhile, in the political sphere, the word in Whitehall is that Penny Mordaunt, the Equalities Minister, is starting to have doubts about changing the law to allow people to self-identify their sex.

Responses to a Government consultation on those reforms showed opposition from women in every part of Britain, other than a few very small clusters in London and a few university towns. Tories who once saw the trans agenda as a way to modernise and reach out to young voters now realise things are more complicated than that.

In the sporting world, Martina Navratilova deserves much credit for shifting the debate. The tennis star and gay rights campaigner spoke out about the trans agenda, which allows male-bodied transwomen to compete in (and often dominate) women’s contests. In the US, transwomen have won athletics prizes at school and college level. How long until we see the same here? Women’s track cycling has a transwoman world champion, the towering Rachel McKinnon.

Navratilova, who once had a trans coach, said it was ‘insane’ and ‘cheating’ for men who had transitioned to compete. This led to a firestorm of criticism for her alleged intolerance.

Yet that storm – including her sacking by an LGBT sports campaign – has brought this issue to the attention of many who had previously taken no interest, and given others the courage to speak out.

Dame Kelly Holmes is among Navratilova’s celebrity backers. She asked the question after the fallout: ‘Can someone please explain to me how she is transphobic?’ Quite. At the same time, it has become apparent that the trans agenda is fraying at the Tavistock and Portman Trust, home of the main NHS gender dysphoria clinic for children, which has seen a 20-fold increase in referrals in a few years.

An internal review has raised doubts about the treatment of sometimes vulnerable children; youngsters presenting as trans often also have mental health problems, while others are autistic.

Dr Marcus Evans, a Tavistock trustee, quit and warned that doctors are under ‘pressure from the pro-trans lobby’ to hasten often vulnerable children towards medical treatment that can include puberty-blocking drugs, hormone therapy and, as adults, surgery.

And an internal report by Tavistock’s consultant psychiatrist Dr David Bell even suggested the clinic was ‘not fit for purpose’. As The Mail on Sunday revealed last year, the Government will soon commission research into the explosive rise in the Tavistock caseload, which includes a disproportionate number of girls.

Any investigation must consider the role of Mermaids, an influential trans-lobbying charity that pushes doctors to fast-track children to treatment and uses dubious statistics to claim that children who don’t get that treatment might kill themselves.

Almost as significant as the open debate about the Tavistock’s treatment of children was the fact the BBC covered the story properly last week. Previously, the Corporation helped muffle debate on trans issues by tiptoeing around it.

But in sharp interviews on the Today programme and a serious, well-researched Panorama documentary about children and gender reassignment, the BBC did its job.

What has been concerning about the movement is that rules and policies that impact women, men and children are being written by pro-trans advocacy groups, who put the preferences and feelings of transgender people over those of others, especially those born female. So if a woman is uncomfortable about sharing a bathroom, changing room or refuge with a transwoman, that woman is the one with the problem.

Schoolgirls have been impacted, too. Shockingly, a guidance ‘toolkit’ has been introduced by some councils telling staff that girls uncomfortable about changing alongside male-bodied trans girls should be re-educated.

The issue of inmates is concerning, with prison policy prioritising the preferences of trans inmates.

This has alarming repercussions, as seen in the case of Karen White, 52, a ‘predatory and controlling’ rapist. Legally still a man, she was jailed for life after attacking a vulnerable woman in a female prison she was housed in, having been jailed for raping two women outside jail.

One of the defining features of the trans lobbyists are the vituperative attacks they orchestrate on anyone who dares disagree or question them. Many do not dare to ask probing questions publicly. Some fear being branded transphobic – a charge that can kill a career in the public sector, even when it is baseless.

Indeed, many ‘gender critical’ women fear ‘doxing’ attacks, where personal information is hacked from emails and social media accounts and spread across the internet. There are also threats of violence and actual violence.

The online hatred directed at anyone who questions the trans orthodoxy is relentless. A recent report by MPs on the All-Party Parliamentary Group on Hate Crime found ‘clear examples of threats and calls to violence against women’ who question the trans lobby.

Those women cannot rely on the police to help – quite the contrary. Many forces have embraced the trans agenda and enforce it with remarkable zeal. Several women, and some men, have had calls and visits from officers over legal comments on social media because they might hurt transgender feelings. This is an absurd situation.

Trans individuals suffer above-average levels of mental illness, poor physical health and yes, discrimination. Yet none of those problems is helped by aggressive lobbyists trying to enforce an agenda and silence dissent. A calm and even mundane debate would serve transgender people better.

No policy made in the shadows can stand for long in daylight. As more come to see the doctrinaire trans agenda and its consequences – for sport, schools, prisons and women – the more the agenda will falter.

There is, however, still a long way to go before the poison is drawn. Indeed, there could be more tension ahead: new guidelines for sex and relationship education in English schools could be the next flashpoint – another consultation showed sharply divided opinions on what and when to teach children about gender and sexuality.

But maybe the tide is starting to turn against the extraordinary trans agenda and an ordinary debate is becoming possible. The sooner this happens, the better.