Theresa May used her final joust with Jeremy Corbyn across the Despatch Box yesterday to land a parting blow on the Opposition leader, saying: ‘Perhaps I could just finish my exchange with him by saying this — as a party leader who has accepted when her time is up, perhaps the time is now for him to do the same.’

Mrs May, who later met the Queen to step down as PM, was applauded as she left the Commons. Corbyn, who did not join in, has been criticised as ‘graceless’.

Three years after she stepped over the threshold with a flutter of hope in her heart and a determination to deliver Brexit, Theresa May left Downing Street yesterday for the last time as leader. 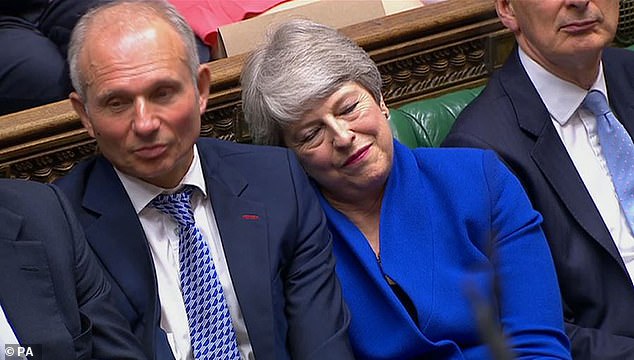 Phew it’s over at last! Theresa May leaned on cabinet minister David Lidington during her last Prime Minister’s Questions in the House of Commons 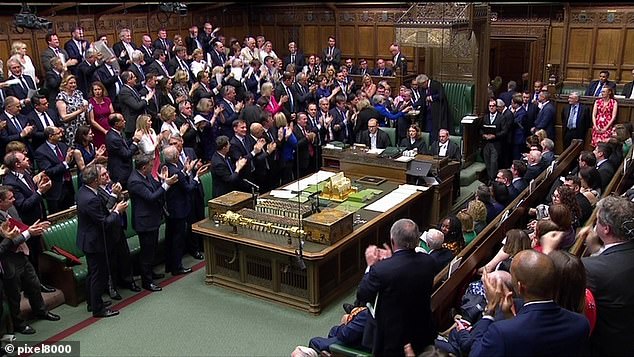 Applause – but Labour sit in: Mrs May received a standing ovation today after her session in Parliament as is pictured above shaking hands with speaker John Bercow

Amid the mocking sunshine of a perfect London summer day, she had a final lunch with husband Philip, served alfresco on the terrace overlooking the Rose Garden.

Afterwards there was a crisp little slice of speech as she wished her successor good fortune.

She looked composed and smart in a very Thatcherite blue peplum jacket and skirt, although her voice was freighted with the occasional shard of raspy emotion. 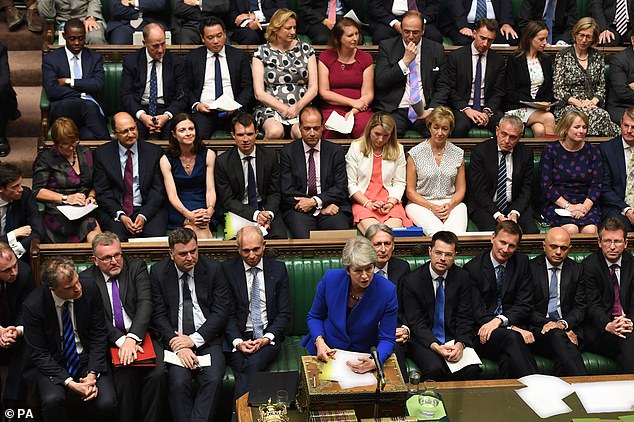 Mrs may was flanked by her most loyal ministers David Lidington and Philip Hammond at PMQs. Both later resigned rather than be sacked by Boris Johnson

Only the sudden interjection of a heckler begging the Government to stop Brexit stemmed the tears that seemed inevitable. ‘I think the answer to that is: “I think not,” ’ she ad-libbed, witty repartee never quite being her strong point.

Earlier there had been a sad cavalcade of closures, a long day of finalities and endings. At her last ever Prime Minister’s Questions, Mrs May had to face Jeremy Corbyn breaching etiquette to attack her instead of giving thanks for her service, as tradition — and, indeed, decency — demands.

She cried as she walked out of the Chamber to a standing ovation from some MPs, although Labour and SNP ministers remained in their seats.

What a sadness that politics has become so petty, so corroded by tribal loyalties that many could not find it in their hearts to acknowledge her service and her efforts, her unimpeachable sense of duty, at least. 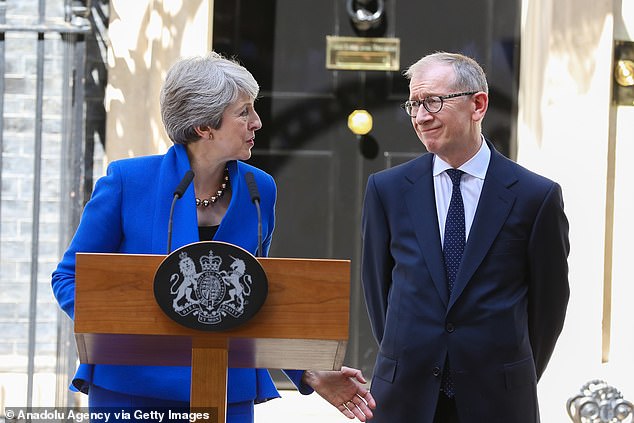 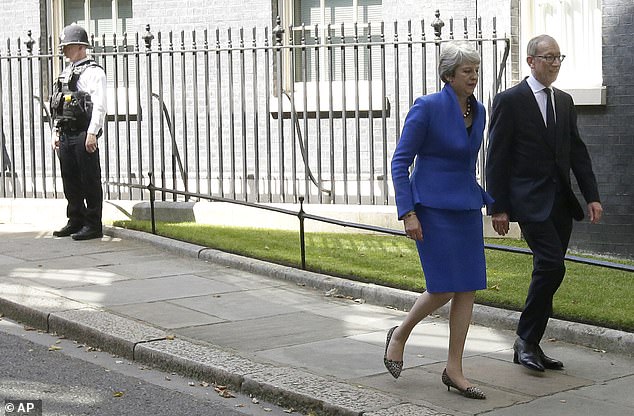 Then it was to Buckingham Palace. After her resignation, she exited unnoticed through the Queen’s private garden entrance stripped of office and pomp, the civilised brutality of parliamentary process laid bare.

The new PM, Boris Johnson, gave hurried thanks for her ‘fortitude and patience’. Ta ta, Theresa, was his tacit message. Time for the big boys to take back control.

One can only imagine how Mrs May must be feeling now, after she has packed away her diaries lined with furiously crossed-out entries for deadlines that came and went, plus the wacky heels that marched her up to the top of the hill and marched her down again.

Few will conclude that her tenure as leader will be remembered as a golden period of strength and, pardon me for mentioning it, stability. 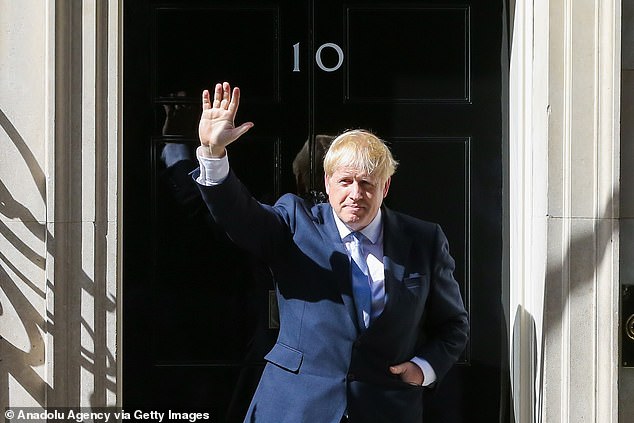 A vintage premiership it was not. Over and over again, you can hear voters and pundits claim that she was the worst Prime Minister this country has ever had; poorer even than Brown, Chamberlain and Callaghan put together, plus any other parcel of rogues or deplorable chumps you care to mention.

Yet can that really be true?

A more good-natured interpretation might conclude that it was Mrs May’s misfortune to be at the helm when the good ship Britannia self-determined to scuttle itself on the rocks of existential despair, amid an ongoing countrywide nervous breakdown.

That is one reason why I hope that history will judge her in a kinder light; to acknowledge the stacked odds, the deadly hand she was dealt and the poisonous atmosphere she had to negotiate. Add to this the utter intractability of myriad selfish politicians who determined to deny the will of the people and, instead, plot for the Brexit outcome they desired. 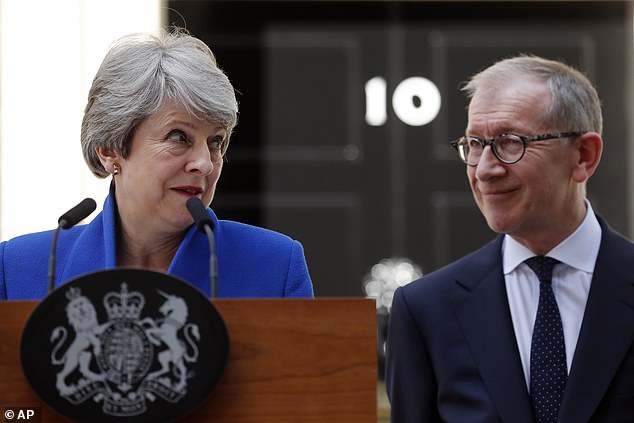 At Westminster, she was encircled by enemies both within her own party and without, while there were madmen across the water in every direction.

All this led to a malignancy of hostility, a stalemate of spite, as each and every one of them determined to thwart her at every step of the way.

Ask yourself this; how much thwartage can one woman take?

Say what you like about T. May, but no one can deny she has done her duty in the international thwart trenches. She did her best, and she did it all in the national interest.

She is a member of that increasingly rare breed; a pure politician who simply wanted to make the world a better place, and not for her own personal gain.

Mentioning no names, but one only has to regard the blowhard pomp of the newly-empowered politicians to suddenly miss her frugal, dry-stick ways, her honourable lack of witty polish, her command of detail and boring doggedness.

At her best, she represented something quite admirable; a calm and thoughtful presence amid the yarooing Billy Bunters and school bullies who populate the Palace of Westminster.

And at least she is a feminist, one who, in 2005, co-founded the Women2Win group to increase the number of Conservative women in Parliament.

Yesterday, on the steps of Downing Street, she said something very inspiring.

‘Every young girl who has seen a woman prime minister now knows for sure there is no limit to what they can achieve,’ she urged, although it is unlikely that her words will be cheered by the fashionable and influential queens of social media. A former banker, Mrs May is a walking distillation of Home Counties Tory values; all lavender water and coral nail polish, summer blazers and terrible trousers, mum-dancing catastrophes and shopping expeditions for interesting herbs at her local branch of Waitrose.

In the weird, supra-concentrated time warp of politics, she already looks like a dusty relic from another age.

Yet even her most ardent admirer, and I am one, could not deny that once in power Theresa May developed a deadening ability to snatch defeat from the jaws of victory, on issues big and small.

In 2017, she called a snap General Election, in which she ended up losing her precious Commons majority. Catastrophe!

During a television interview, unprompted, she burbled that she and husband Philip split the domestic chores into ‘boy jobs and girl jobs’. Cringe!

Mrs May always seemed the kind of woman who couldn’t wait to get home from work — to do some more work. Exactly the kind of diligent do-gooder qualities the electorate wants in a leader. Yet all of a sudden she tried to make herself populist and likeable, even human.

She claimed to be a fan of Doctor Who (stop it); she insisted that she and husband Philip liked nothing better than to watch the teatime game show Countdown together (as if); she said that the naughtiest thing she ever did was to run naked through a wheat field (I lied about the naked bit).

During her final television interview as leader, Mrs May told the BBC of her intense frustration at not seeing Brexit through while admitting that she had underestimated just how ‘entrenched’ MPs had become.

Entrenched. Well, that is one way of putting it. Asked if she could have done more to persuade MPs to back her Brexit deal, she replied: ‘One could always look back and say: “If I’d sat down and talked to people more often.” ’

Perhaps it is this trait, her engrained insularity, which is the key to both her successes and her failings.

Throughout her political career, Mrs May has been renowned for being closed, controlling and untrusting of others. 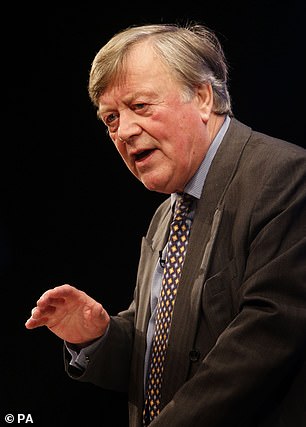 She is, as Ken Clarke — who toiled in the Thatcherite salt mines for more than a decade — pointed out, a bloody difficult woman.

You can see this ruinous intransigence filter through to Mrs May’s personal life, from her terrible misshapen cocktail dresses to the fact that she paints her own nails, not always perfectly.

She seems to have no close friends or advisers who might urge caution, who would tell her what she does not want to hear.

Yesterday she thanked her husband of almost 39 years for being ‘her greatest supporter and closest companion’. That is wonderful, but faithful Phil is, sadly, not enough.

In the final reckoning, Theresa May found that delivering Brexit was a task too far and it is clear that she has ended up as the scapegoat for the current toxic stalemate.

Perhaps she will take consolation from the fact that Boris Johnson will benefit from her years of hard slog, even if she will never, ever get the credit.

All her efforts, all that dashing hither and forth to Brussels and back, all that desperate endeavour finally sundered on a hill of no hope.

As Theresa May scuttles back to the back-benches, to her beloved home in Maidenhead, to her garden and her church and her Ottolenghi cookbooks and her alphabetically ordered spice rack, do you know what I think?

I think we will all breathe a sigh of relief that it is finally over at last. Including her.

Prince Charles is hit by a major counterfeit art scandal
Diners have eaten more than 35million Eat Out To Help Out meals in Rishi Sunak's half-price scheme
Michael Gove hosted cocaine-fulled party at London flat hours after condemning the Class A drug
Iranian 'bomb boat is discovered in the path of Royal Navy destroyer' sent to the Gulf
Father, 34, is jailed for 16 months after breaking lockdown rules and restraining order
Dozens of gun lovers flock to Salt Lake City for a firearm rally
Floods hit homes as parts of UK get a month's rain in an hour
Stephen Belafonte claims Mel B was behind the camera in sordid sex tapes