Jeremy Corbyn was last night branded ‘Stalinist’ in his response to MPs quitting Labour as he faced the threat of more resignations.

Labour yesterday blocked MPs and local party officials from accessing its databases, claiming one of the defectors had tried to steal members’ data.

Meanwhile, the party announced plans to force by-elections in the constituencies of those leaving by allowing voters to stage recall petitions. 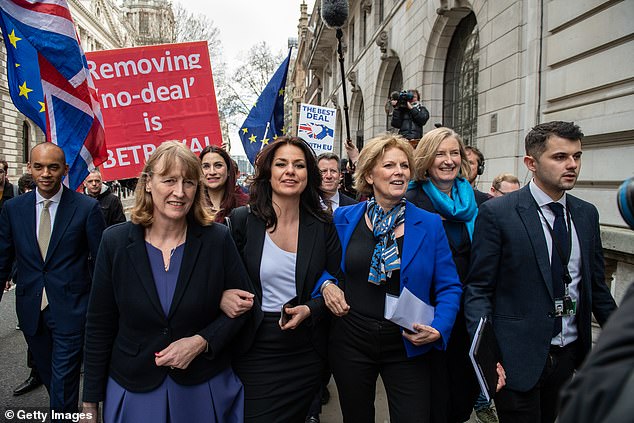 And Corbyn-backing Momentum said it would canvass in the defectors’ constituencies to warn voters they had ‘joined a Blairite-Tory coalition’ after Conservative MPs Heidi Allen, Anna Soubry and Sarah Wollaston joined their ranks yesterday.

Labour sources said the ‘floodgates were on the verge of bursting’ after Joan Ryan became the eighth Labour MP to quit this week in protest at Mr Corbyn’s leadership.

A string of Labour MPs warned they were considering defecting, issuing ultimatums to Mr Corbyn that he needed to change or they would go too.

But the Labour hierarchy stepped up its attacks on the defectors, branding The Independent Group an ‘establishment coalition’ based on the ‘failed politics of the past’.

So what on earth could happen next?

Derek Hatton was last night suspended by Labour just two days after it was revealed he had rejoined the party.

In an astonishing U-turn, Labour said it acted after it emerged Mr Hatton wrote a tweet suggesting all Jews had a duty to speak out about Israel’s crimes.

News that he had rejoined Labour emerged on Monday – the day seven MPs quit the party over leader Jeremy Corbyn’s attitude to anti-Semitism and Brexit.

On Tuesday it was learned that in 2012 Mr Hatton tweeted: ‘Jewish people with any sense of humanity need to start speaking out publicly against the ruthless murdering being carried out by Israel!’

Labour MP Neil Coyle said Mr Hatton’s comment ‘seemed to imply that every Jew, wherever they live in the world, is responsible for the actions of the Israeli government’.

Earlier yesterday, a Labour source said party chiefs were not aware of the tweet when Mr Hatton applied to rejoin.

The insider added: ‘The party is looking into this as a matter of urgency.’ It later emerged he had been suspended.

The Mail revealed yesterday that Mr Hatton had questioned the existence of Labour’s anti-Semitism crisis and attacked Jewish MPs such as Dame Margaret Hodge.

He claimed her criticisms were ‘nothing to do with anti-Semitism but all to do with trying to remove Corbyn’.

Mr Hatton also supported former London mayor Ken Livingstone after he claimed Hitler was a Zionist, tweeting: ‘Where is the lie in what he said?’

And he called for a sporting boycott on Israel. Shadow international trade secretary Mr Gardiner issued an apology to Jews on behalf of Labour and suggested Jewish MP Luciana Berger and others who quit this week had been ‘forced out’.

In a debate on anti-Semitism in the Commons, he said: ‘This morning I saw the reports about not just the readmission of Derek Hatton but the tweets he has mentioned.

‘I wrote to the general secretary of our party, I lodged a formal complaint. I understand that action has since been taken in respect of the complaint.

‘I think it was a travesty… I think many of us knew for some while that he had applied to rejoin the party, but for the news of his readmission to come to public attention on the very day when some members of our party were forced out – I think it was appalling.’

He added: ‘I want on behalf of my party to publicly apologise to the Jewish community. We have let you down.

‘We will not stop working until we once again become a safe and welcome home for people from the Jewish community, as from every other.’

Mr Hatton was expelled by Labour 34 years ago for membership of the Trotskyite Militant Tendency.

He was deputy leader of Liverpool Council when an illegal budget was set and redundancy notices were sent by taxi to thousands of workers.

Galloway dismisses anti-Semitism claims as ‘like work of Goebbels’

Hard-Left former MP George Galloway likened claims of anti-Semitism against Labour to the work of Nazi propagandist Joseph Goebbels as he applied to rejoin the party.

Commenting on Labour MPs who quit this week, he said: ‘With the Blairites walking out the door, hurling slander at Corbyn and the Labour leadership, it’s really a black op that’s going on here.’

He told Sky News: ‘This is pure Goebbelian propaganda – repeat a lie often enough and some people will believe it.’

Mr Galloway was then asked if he thought the reference was ‘entirely appropriate’ given that Luciana Berger said she left Labour due to anti-Semitism.

He replied: ‘I don’t believe she’s leaving because of anti-Semitism.’

Mr Galloway was expelled from Labour in 2003 after a disciplinary hearing found he had brought the party into disrepute for ‘inciting Arabs to fight British troops’.

He said yesterday he had written to the party to have his expulsion rescinded, but last night Labour said no membership application had yet been received.

Mr Corbyn’s spokesman claimed the group had endorsed tax cuts, austerity and privatisation at its launch – even though none of these were mentioned at the event.

Yesterday, Labour sources claimed that one of the party’s breakaway MPs had tried to access its supporters’ data, prompting it to shut down its key canvassing software.

General secretary, Jennie Formby, wrote to staff reminding them of their responsibility to guard canvassing information.

Siobhain McDonagh, Labour MP for Mitcham and Morden, confirmed that she was one of those considering quitting, warning: ‘The ball is in Jeremy Corbyn’s court.’

She added: ‘In recent months I have watched in horror as the scourge of anti-Jewish racism has reared its ugly head in the party that I love.

‘There can be no doubt: There must be a zero-tolerance approach in rooting out all anti-Semitism from our party.

‘The leadership of the Labour Party needs to decide whether it will remain a hard-Left rump that gets some MPs in Parliament but never become a Government, or a wide, inclusive, broad coalition that wants the best for this country.’

She slammed a Labour plan to allow voters to stage recall petitions when MPs switch sides, which could trigger a series of by-elections, as ‘Stalinist’ and ‘authoritarian’.

Birmingham Yardley MP Jess Phillips demanded that Mr Corbyn ‘call out’ the anti-Semites among his supporters, as she suggested she could follow the quitters.

‘I was born Labour and I felt like I’d die Labour, but when I listen to my colleagues speaking, I find it very hard to disagree with a lot of what they were saying,’ she told Sky News.

‘And so now I pass that baton to Jeremy Corbyn and expect him to really listen and take action. 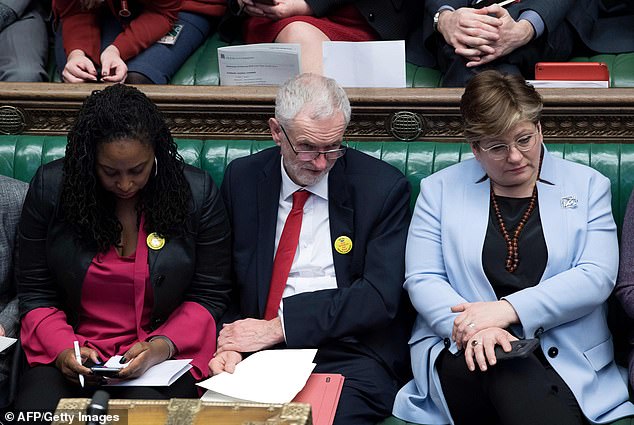 ‘If those people don’t feel welcome in the Labour Party any more, we have a problem.’

If he does not do so, then he will be culpable for sabotaging the values that led to the creation of the Labour Party and responsible for the withering away of a once great political force.’

The message appeared on the Young Labour Twitter account after MP Joan Ryan, who is chairman of the Labour Friends of Israel group, resigned from the party to join the Independent Group.

One user called the tweet ‘absolutely shocking’, while another said: ‘If those responsible for the Young Labour Twitter output are really the future of the Labour Party, then the Labour Party is doomed (and deserves to be).’

Miriam Mirwitch, chairman of Young Labour, swiftly condemned the post and denied she had written it.

She added: ‘Multiple members of YL committee have access to the account. Please don’t think the conduct of a few on social media represents the whole of Young Labour. There’s so much talent, so many brilliant activists and so much to be proud of in our movement. I’ll never stop fighting to make our movement a welcoming and inclusive place.’

Miss Mirwitch also had to publicly criticise a tweet sent from the account when the first seven Labour MPs resigned on Monday, which appeared to refer to them as ‘cowards’ and ‘traitors’.

She said: ‘This tweet is entirely inappropriate. I do not support it. I am strongly opposed to Labour splits, but [the tweet] is the incorrect response.’

Currently, recall petitions can be run only in certain circumstances, such as a serious breach of parliamentary rules or a criminal conviction of an MP.

But Shadow Cabinet Office minister Jon Trickett has put forward a plan, with the approval of the Labour leader’s office, to change the law so defecting MPs could be challenged too.

As he hosted a radio phone-in on LBC, Mr Watson said that whatever the merits, ‘it just looks spiteful’. 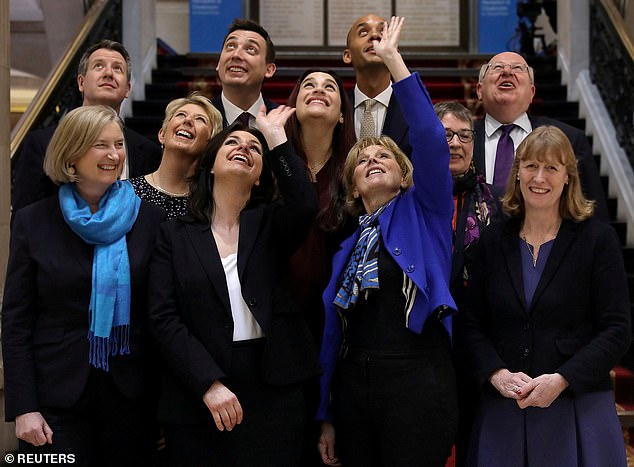 Labour group Momentum said it would canvass in the defectors’ constituencies to warn voters they had ‘joined a Blairite-Tory coalition’ after Conservative MPs Heidi Allen, Anna Soubry and Sarah Wollaston joined their ranks yesterday

‘Those people that left the Labour Party did so with a heavy heart, and it looks like we are kind of reflexive and trying to be knee-jerk about it, rather than looking at the actual issue, which is Brexit and the state of British politics,’ he said.

‘Now they’ve left the party and joined a Blairite-Tory coalition standing on a completely different platform.

Labour looks set to lose control of a city council after one of its councillors defected to the Tories over the issue of anti-Semitism.

Anne Meadows, whose husband is of Jewish descent, crossed the floor of Brighton and Hove Council after enduring 18 months of attacks.

She said: ‘There has been a lot of anti-Semitism going on in the city and that was aimed at me as well.’

Last July, she was deselected by Labour party members ahead of this year’s local elections. The Tories are now the council’s largest party and will try to form a minority administration.

Mrs Meadows said the abuse ‘came to a head even in Labour group meetings where I would be attacked, and none of the other councillors would prevent it.

‘I used to go home feeling awful and I thought there’s got to be more than this, it’s not the Labour party I knew and loved’. Her decision was welcomed by Theresa May, who said at PMQs yesterday: ‘I am sure she will be an excellent Conservative councillor.’