Jeremy Corbyn could be hit by up to a dozen frontbench resignations if Labour back a second referendum on Brexit.

A string of junior shadow ministers are opposed to the idea of a second vote amid fears of a vicious backlash in leave-voting constituencies.

It comes as Corbyn and Prime Minister Theresa May bid to pull Westminster from the Brexit quagmire engulfing both major parties. 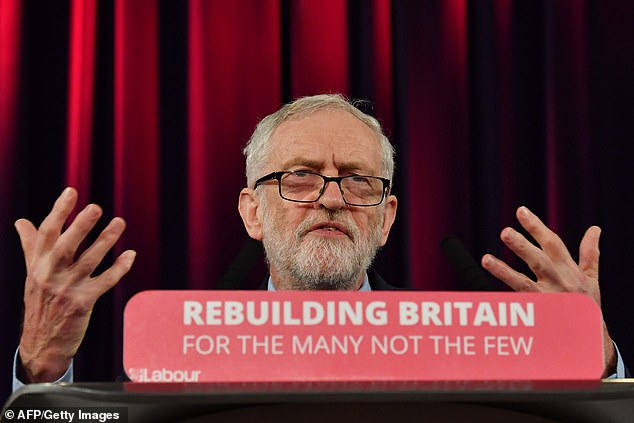 Jeremy Corbyn could be hit by up to a dozen frontbench resignations if Labour back a second referendum on Brexit. A string of junior shadow ministers are opposed to the idea of a second vote amid fears of a vicious backlash in leave-voting constituencies

One junior shadow minister told the Guardian:  ‘I would be in a really difficult position if we backed a second referendum.

‘I would have little choice but to stand down if I was to have any hope of retaining my seat and representing my constituents.’

Another said: ‘I would feel deeply uncomfortable about going into a people’s vote at this stage. Given all the commitments that we made in the general election, we have to carry them out.

‘This concept of blocking Brexit is wrong and would break a link with millions of our traditional voters who expect us to keep our word,’

Gloria De Piero, the shadow justice minister said she was not in favour of a second referendum.

While MP for Manchester Central Lucy Powell said that with no agreed Brexit deal in place, it was unclear what options would be offered on a second referendum.

She then went on to criticise referendums as a bad way of tackling complex issues.

Yesterday Corbyn ordered his MPs not to take part in Theresa May’s desperate effort to win votes for her Brexit deal as the stalemate in Westminster deepened.

The Labour leader has refused to meet the Prime Minister in the aftermath of Tuesday night’s devastating vote unless she rules out ever allowing a no deal Brexit to happen.

But Labour moderates Yvette Cooper and Hilary Benn immediately defied Jeremy Corbyn to hold talks with the Government while urging the PM to rule out a no deal Brexit .

The Labour MPs met with Theresa May’s de-facto deputy David Lidington for the cross-party discussions called by the PM to find a way through the crisis.

Emerging from the talks in Whitehall this afternoon, they urged her to abandon her negotiating red lines to come up with a plan which can win Labour support.

But their presence at the meeting exposes deep splits in the Labour Party as Mr Corbyn emailed his MPs today to order them not to hold talks with No10. 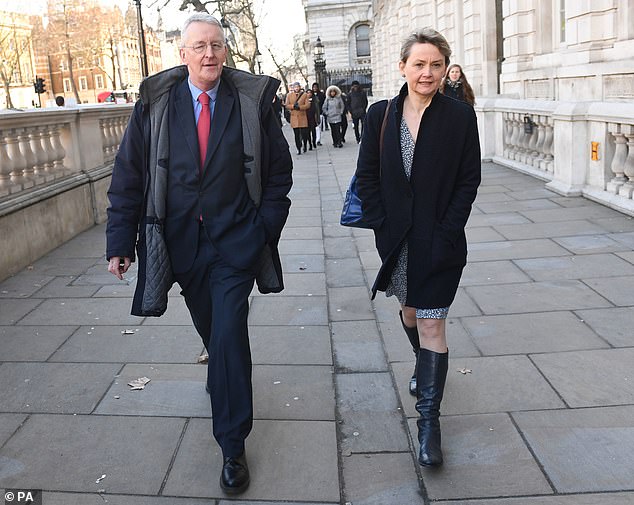 The Labour leader has refused the PM’s offer to take part in the talks – branding the offer a ‘stunt’ in order to run down the clock on the Brexit negotiations.

Speaking after the talks Mr Benn, chairman of the Brexit select committee, said: ‘The government has to rule out no deal. That’s the first step.

‘Secondly, the Prime Minister needs to change her red lines.’

Ms Cooper, chairwoman of the Home Affairs Select Committee, said: ‘The most important thing now is that the Government actually listens and it doesn’t just think that a defeat that was that huge can simply be dismissed.’ 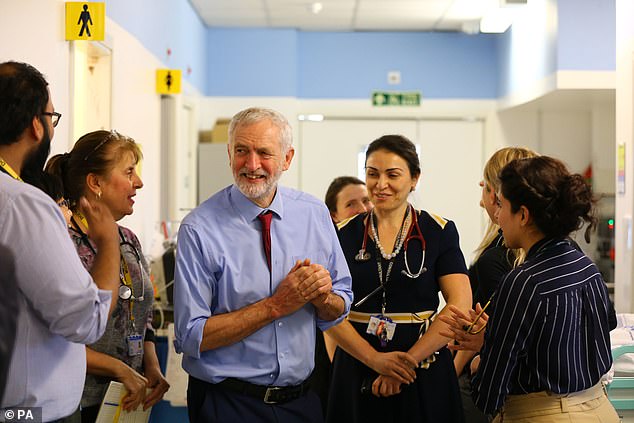 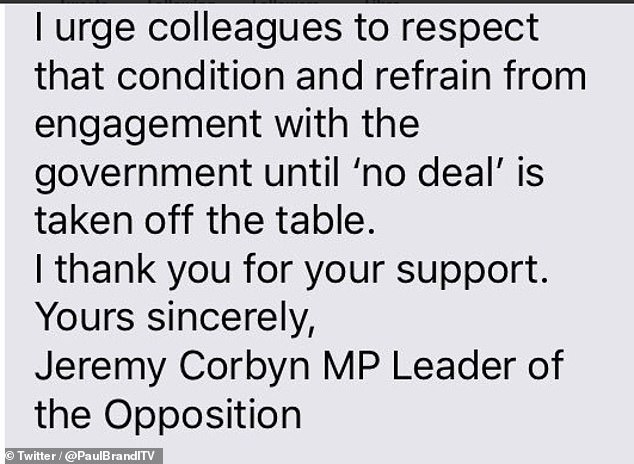 The pair went along to the talks despite being told explicitly not to by their party leader.

In an email to all his MPs today, Mr Corbyn wrote: ‘I urge colleagues to respect that condition and refrain for engagement with the Government until ‘no deal’ is taken off the table.’

The pair said they had attended the meeting in their capacity as the heads of their respective select committees.

A smiling John Mann, a Leave-supporting Labour MP and long-term critic of Mr Corbyn, was spotted coming out of the Cabinet Office in Whitehall at around 12.20pm, an hour after the leader’s speech.

Meanwhile, other Labour MPs have slammed their leader for refusing to sit down for the talks at a time of national crisis.

Labour MP Mike Gapes tweeted: ‘Apparently Corbyn is prepared to hold talks with Hamas, Hezbollah, Assad and Iran without preconditions. But not with the UK Prime Minister. Why?’

Mrs May is holding cross-party talks after her Brexit deal was overwhelmingly defeated in the Commons on Tuesday night.

A staggering 432 MPs voted against it and just 202 back her plan. The 230 vote loss was the biggest defeat ever inflicted on a British Prime Minister. 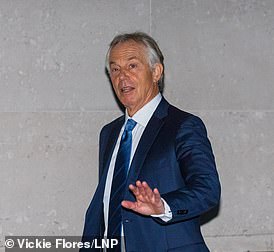 Mr Blair said it was wrong for the Opposition leader to snub a meeting with the premier at a ‘moment of national crisis’.

‘If, in a moment of national crisis, the Prime Minister asks the Leader of the Opposition to come and talk, of course he should,’ he told BBC Radio 4’s Today programme.

He added: ‘At some point he is going to have to make his position clear,’ he said. ‘It is quite hard to read the runes sometimes in Labour policy right now, but, as I understand, our position is that if the no confidence motion fails, as it has, then there is an overwhelming majority for supporting putting this back to the people.’

Speaking in Hastings today, Mr Corbyn doubled down on his demand that the PM take any chance of a no deal Brexit off the table before he would be prepared to speak with her.

And in a letter to the PM, he said that she must abandon her Brexit deal and start from scratch.

Addressing a press conference in the Tory marginal constituency of Hastings, he said: ‘Last night’s offer for talks with party leaders turned out to be simply a stunt – not a serious attempt to to engage with that the new  reality that’s needed.

‘No sooner had she said the words in Parliament than the government confirmed that she would not take no deal off the table.

‘With no deal still on the table, the prime minister would enter into phoney talks just to run down the clock and try to blackmail MPs to vote through her botched deal on a second attempt by threatening the country with the chaos of no deal if they resist a second time.’

He risked infuriating his Remain-backing MPs by refusing to immediately endorse a second referendum.

Instead he said Labour wants a general election – and indicated that Labour will table more votes of no confidence in the Government as he doges making a choice on a second public vote.

Although he repeated Labour party policy that ‘all options’ are on the table.

On holding more no confidence votes, he said: ‘We will come back on it again if necessary because we are determined…to give people the choice about who their MP should be.

‘In the meantime all options are on the table, we are serious about finding a way through.

‘If the government remains intransigent…and the country is facing the potential disaster of no deal then our duty will be to look at the options set out in our conference motion – including that of a public vote.’

And in a letter to the PM, he told her she must ditch her EU Withdrawal Agreement and draw up a new exit plan.

He wrote: ‘Labour is open to meaningful discussions. But following the decisive rejection of the government’s deal by MPs on Tuesday, those cannot be on the basis of your existing red lines.

‘It is clear that no tweaks or further assurances are going to win support for the government’s Brexit deal in Parliament.

‘We have set out an alternative framework for a better deal: based upon a new comprehensive UK-EU customs union; a strong Single Market deal; and guarantees that there can be no race to the bottom on rights and standards.

‘That is the consistent position that Labour has outlined over the past year. 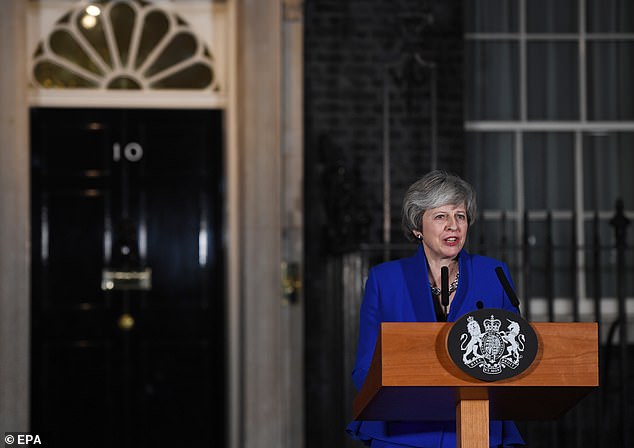 ‘I am disappointed that there have already been several briefings in which you continue to rule out a customs union.

‘A new customs union is part of a solution favoured by most businesses and trade unions, and one that I believe could command a majority of the House of Commons.’

Mr Corbyn has faced a storm of criticism from MPs – including Labour backbenchers – for refusing the PM’s offer of talks.

And this morning Tony Blair also attacked his decision, saying it is wrong to make the snub at a ‘moment of national crisis’.

‘If, in a moment of national crisis, the Prime Minister asks the Leader of the Opposition to come and talk, of course he should,’ he told BBC Radio 4’s Today programme.

He added: ‘At some point he is going to have to make his position clear.

‘It is quite hard to read the runes sometimes in Labour policy right now, but, as I understand, our position is that if the no confidence motion fails, as it has, then there is an overwhelming majority for supporting putting this back to the people.’

Glenn Hoddle has always been an evangelist of the beautiful game
'Ditch the fancy foam drizzles for REAL food,' urges Prue Leith
Gwyneth Paltrow under fire for 'leanest liveable weight' goal that appeared on her lifestyle website
Comedian who married two days before he died ensured his £27.5million fortune went to his new wife
Forbes 30 Under 30 in Europe List is revealed
Britain is swamped by up to 63 floods as massive downpours bringing a week's worth of rain
Senior doctors warn that cancer patients will not receive vital treatment during coronavirus crisis
Fears grow for British yachtsman, 67, who has gone missing on his way home to France