Jeremy Corbyn urged Labour supporters to be ready for a general election today as Theresa May’s Government descended into anarchy.

It came after Brexit Party leader Nigel Farage had cast his vote with a snipe at Mr Corbyn by saying: ‘Labour are in so much trouble here, you can’t believe it’.

During a visit to Worthing, West Sussex, on Thursday the hard Left Labour leader told a group of candidates: ‘Get ready for a general election. We will sort things out.

‘Under a Labour Government, Britain would be a very, very different place.’

Joking with the group, he added: ‘The Tories; I can’t say I feel very sorry for them but I’m trying. I’m an incredibly generous person.’ 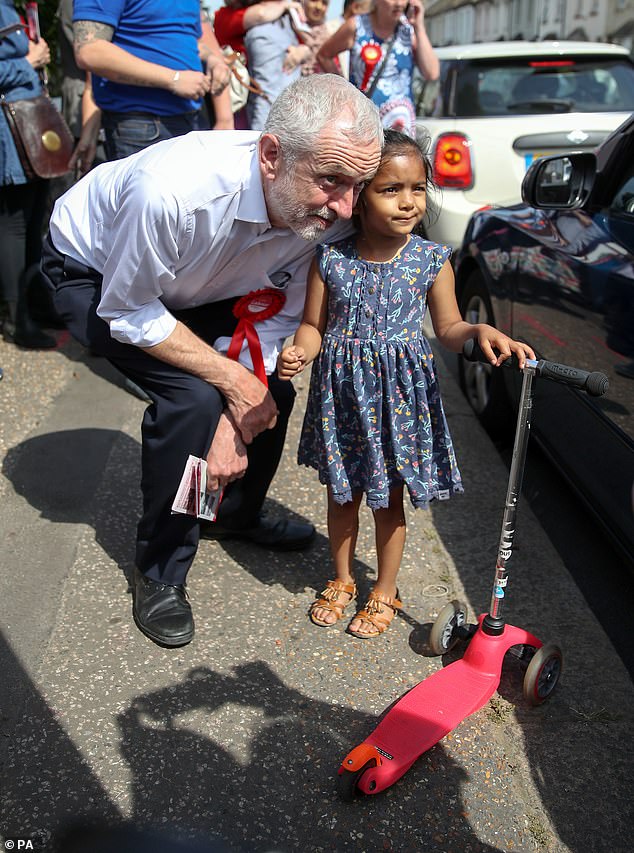 Mr Corbyn spoke to Diya Patel, four, who passed him on the pavement while on her way home from nursery with her mother in Worthing today 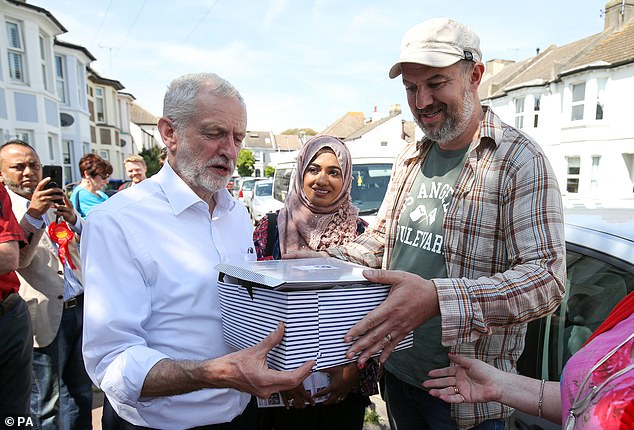 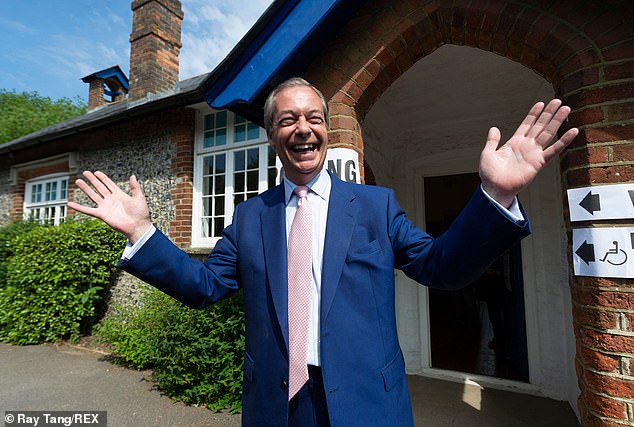 This morning Mr Corbyn released a video message as voters headed to the polls for the European elections.

Warning that ‘the far-right is on the rise’, the Labour leader said Britain was ‘at a crossroads’.

‘The actions we take now will have huge consequences for our future,’ he said.

The Brexit Party leader Mr Farage predicted his new party ‘could win big’ today as voters abandon the Tories, leaving them up to 23 per cent behind in the polls.

Labour appear to be battling with the Liberal Democrats for second place as a recent survey found that voters are unsure about what their position on Brexit is.

Mr Farage has sought to exploit that fissure, visiting Labour heartlands where the majority voted to leave the EU and declaring Jeremy Corbyn’s party ‘is vulnerable in the most extraordinary way’.

When asked if ‘Labour wanted Brexit’ he told Channel 4 News: ‘Yeah we want to abide by the decision of the last referendum’. 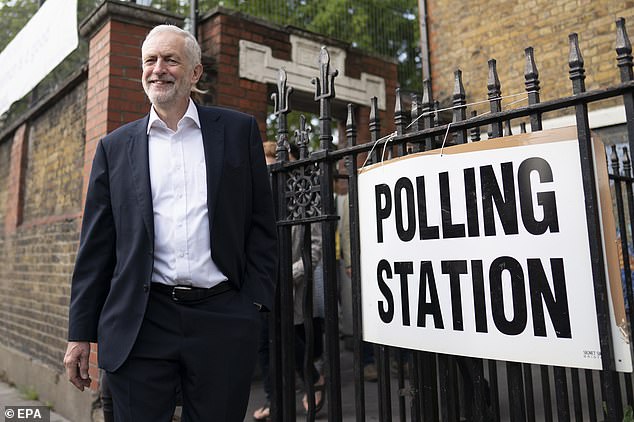 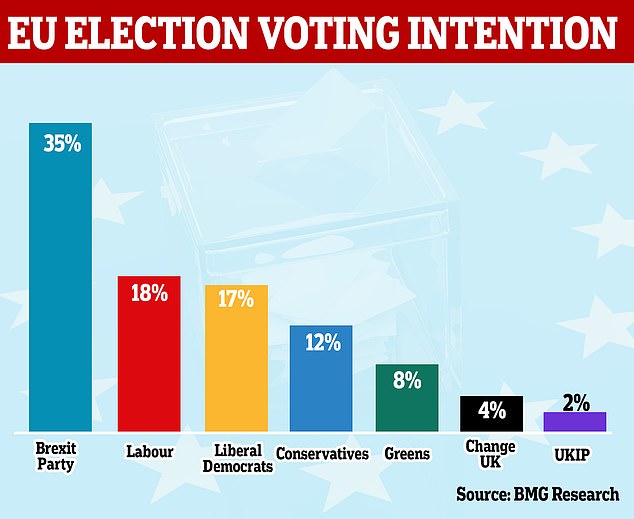 Nigel Farage denied claims he hid on his Brexit Party bus to avoid being doused in milkshake again yesterday.

He was campaigning in Kent when two men and a woman were spotted waiting for him at his next stop in Rochester.

One of Mr Farage’s supporters said they were carrying milkshakes and he was quickly alerted. His bus driver Michael Botton said the Brexit Party leader had to quickly change his plans to avoid an attack – though later his spokesman insisted that Mr Farage had not hidden inside the bus.

‘There are a couple of guys standing over there with milkshakes, they were going to throw them over him,’ Mr Botton told website Kent Live. ‘But the police are there, we’ve spotted them and now Nigel isn’t getting off the bus.’

The group were accosted by Brexit Party organisers who prevented them from getting too close to Mr Farage.

The Tories predicted to get 12 per cent of the vote in today’s European elections – 23 points behind Nigel Farage Brexit Party who are on 35 per cent.

The PM’s party is also trailing Labour and the Liberal Democrats, the final opinion poll before today’s election has revealed, but they may just edge out the Greens.

Some polls showed the Tories could win just seven per cent of the vote – their lowest share in history.

Ms Flint, who represents Don Valley, urged the Commons to ‘take stock’ after the expected mauling for her party and the Tories in the European elections.

The former minister under Gordon Brown, who has voted for the PM’s deal before, was one of the few MPs to stick up for Mrs May’s plan during a Commons debate today.

She said: ‘Anybody on any side of the House, if they claim to be against No Deal, they should give this proposition due consideration and think about how they would amend it.’ 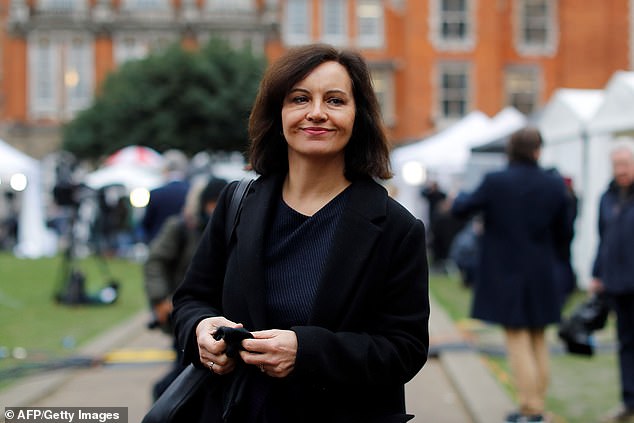 She added: ‘The PM has said several times already that if the second reading of this Bill does not succeed there will not be another opportunity to leave with a Withdrawal Bill.

‘The only course and direction will be to leave without any deal at all. 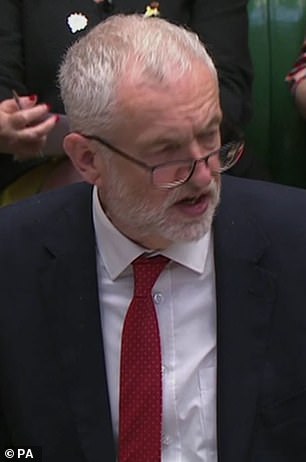 Labour leader Jeremy Corbyn earlier declared Mrs May’s Government was ‘too weak’ and ‘too divided’ to get Britain out of the Brexit ‘mess’ it had created, describing her latest offer as not a ‘genuine compromise’.

He said no Labour MP could vote for a deal ‘on the promise of a Prime Minister who only has days left in her job’.

The Labour leader said the Prime Minister’s promised ‘bold new deal’ is ‘little more than a repackaged version’ of her three-times rejected deal.

He told the Commons: ‘The rhetoric may have changed but the deal has not.’

Mr Corbyn said Mrs May offered no change on a customs union, single market alignment nor on environmental protections.

He went on: ‘This Government is too weak, too divided to get this country out of the mess that they have created.’

Labour leader Jeremy Corbyn said Mrs May’s deal is not a ‘genuine compromise’ and that Labour MPs cannot vote for it given the Prime Minister only has ‘days left in her job’.

Speaking in the Commons, Mr Corbyn said: ‘It is clear no compromise would survive the upcoming Tory leadership contest.’

He added: ‘It is clear that the shrunken offer that has emerged satisfied no-one. Not her own backbenches, not the DUP, and not the official opposition either.

‘No Labour MP can vote for a deal on the promise of a Prime Minister who only has days left in her job. Even if the Prime Minister could honour her promises, the deal she is putting before us does not represent a genuine compromise.’ 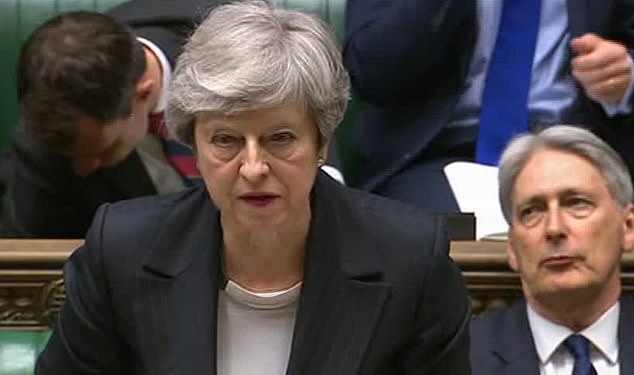 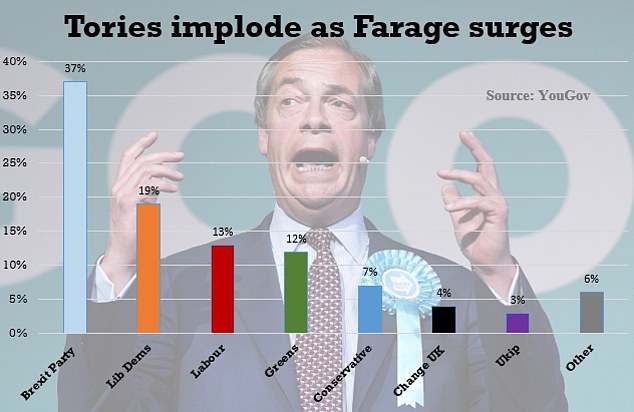 As Theresa May’s leadership implodes, the Conservatives have dropped another three points over the past week – while Nigel Farage’s new outfit have gone up by two

Theresa May had pleaded with MPs to let her Brexit deal pass, as she faced intense pressure to quit after Tories rejected her latest proposals.

The Tories have slumped to just 7 per cent on the eve of European elections – as a shock poll shows the Brexit Party surging further ahead.

As Theresa May‘s leadership implodes, the Conservatives have dropped another three points over the past week – while Nigel Farage‘s new outfit have gone up by two.

The YouGov reseach for the Times also paints a grim picture for Labour, which has slipped into third on just 13 per cent support – well behind the Lib Dems on 19 per cent and only just ahead of the Green on 12 per cent.

The dire figures underline the catastrophe facing Mrs May and the Tories when the results of the elections are declared on Sunday night and Monday morning.

Even loyalist Conservatives are deserting the PM as she comes under pressure to pull the plug on her Brexit deal and resign.

The Prime Minister warned that whoever succeeded her would face the same Brexit pressures as she called on MPs to back the Withdrawal Agreement Bill (WAB).

In a Commons statement she appeared to acknowledge that her time in office was limited, having already said she will set out a timetable for her departure after the crunch vote on her Bill.

‘In time another prime minister will be standing at this despatch box,’ she told MPs.

‘But while I am here, I have a duty to be clear with the House about the facts.

‘And we will not do so without holding votes on the issues that have divided us the most – that includes votes on customs arrangements and on a second referendum.’

Conservative Eurosceptics have reacted with fury to the Brexit plan’s offer of a vote on whether to hold another referendum.

Senior Tory MPs will again seek to change party rules to allow a confidence vote in her leadership if she refuses to leave Number 10.

Mrs May said the WAB would be published on Friday and backing it would help get the UK out of the EU by the end of July.

‘We can bring an end to the months – years – of increasingly bitter argument and division that have both polarised and paralysed our politics,’ she said.

‘We can move on, move forwards, and get on with the jobs we were sent here to do, what we got into politics to do.

‘That is what we can achieve if we support this new deal. Reject it, and all we have before us is division and deadlock.’

California firefighter finds feline friend during wildfire rescue and jokes cat won't leave his side
Huawei set to announce new flagship smartphones
Paul McCartney reveals his grandson was robbed at knifepoint in London and had his phone taken
Dakota Johnson and Chris Martin's driver accidentally runs over a pedestrian's foot in New York
Sammie Marshall says husband left her for 16-year-old babysitter
British mother, 55, arrested in Dubai for branding ex-husband's wife 'horse' arrives back in the UK
‘Suicidal’ mechanic feared dead after stealing plane near Seattle
Mother killed and child she was pushing in pram fighting for life after being hit by car in London