Jeremy Corbyn‘s brother led a protest against the coronavirus lockdown today – which had to be shut down by police.

Piers Corbyn spearheaded the rally in Glastonbury, Somerset, against the Government’s lockdown, which he said was causing more people to die.

Speaking to The Telegraph, Mr Corbyn said: ‘We want to end the lockdown to get the NHS back to doing its job of helping the most vulnerable people who are locked up in care homes or staying at home going mad. 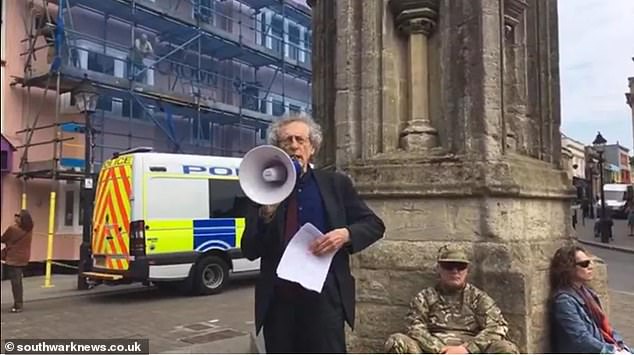 Piers Corbyn (pictured) spearheaded the rally in Glastonbury, Somerset, against the Government’s lockdown, which he said was causing more people to die

‘The lockdown is achieving the opposite of what it was intended to achieve.’

He claimed that over 100 people attended the event.

One witness claimed that Mr Corbyn was the ‘ringleader’ of the protest – to which Avon and Somerset police were called.

During his speech Mr Corbyn can be heard saying: ‘We all know the lockdown has failed us. It has caused misery.

‘We know there is no pandemic…We’ll have more deaths from loneliness, suicide and people being kept out of hospital.’

Footage filmed of the activists in Glastonbury’s Market Place show them clashing with police – and denying that social distancing is necessary to stop the spread of the disease.

One Glastonbury resident told Southwark News: ‘We were really horrified to see it. There were about fifty people at one point, there was even a fiddler playing music.

‘It was like a typical day in Glastonbury – there was no social distancing at all. Piers was the ringleader, he absolutely incited this big public gathering, and that’s completely irresponsible.’

A police spokesperson said: ‘We attended a small protest in the centre of Glastonbury this afternoon. Approximately 30-40 people turned up and the event was peaceful in nature. 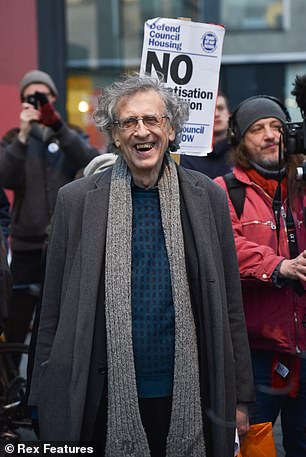 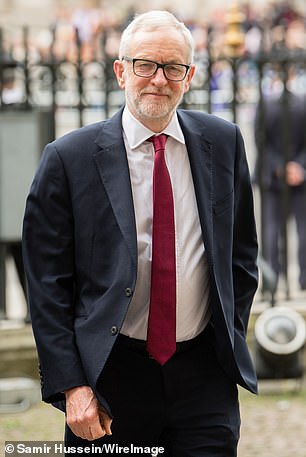 One witness claimed that Mr Corbyn (pictured left at a different protest) was the ‘ringleader’ of the protest – to which Avon and Somerset police were called. Right: Jeremy Corbyn

‘Officers attended Market Place and engaged with the individuals concerned and explained the need to adhere to the current guidelines and the group subsequently dispersed.

‘We are pleased the overwhelming majority of people are complying with the current guidelines around staying at home and social distancing.

‘We continue to encourage people to follow this message to help protect our NHS and save lives.’

A ban on public gatherings of more than two people was implemented by the government in late March.

Numerous scientists have agreed that social distancing measures are necessary to save lives.