Jet 2 has vowed to prosecute a woman who allegedly tried to storm a plane’s cockpit on a flight to Turkey.

Two RAF Typhoon fighters intercepted the aircraft over Essex to guide the airline into land at Stansted Airport on Saturday evening after the 25-year-old woman threatened to open the emergency exit at 30,000ft.

The jets’ Quick Reaction Alert caused sonic booms across the east coast as the pair of supersonic fighters raced south from RAF Coningsby in Lincolnshire.

Passengers and crew pinned the passenger from Maidenhead, Berkshire, to the ground while the aircraft returned to Stansted at around 5pm.

She was arrested by police upon landing but was released on bail until June 30.

Essex Police confirmed they arrested the 25-year-old woman after the Jet 2 aircraft returned to Stansted around 5pm. The passenger aircraft was escorted back to the Essex airport by two RAF jets 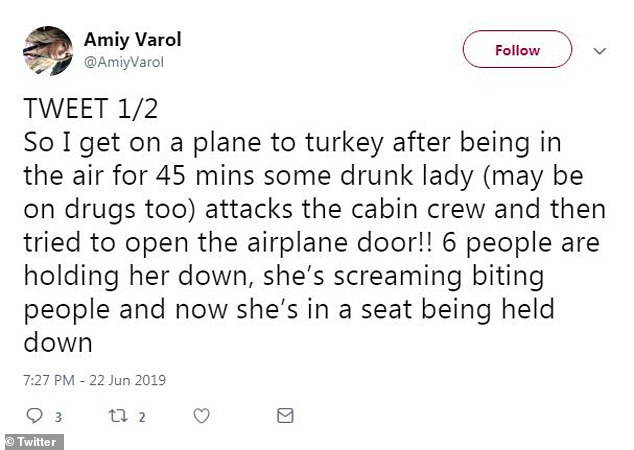 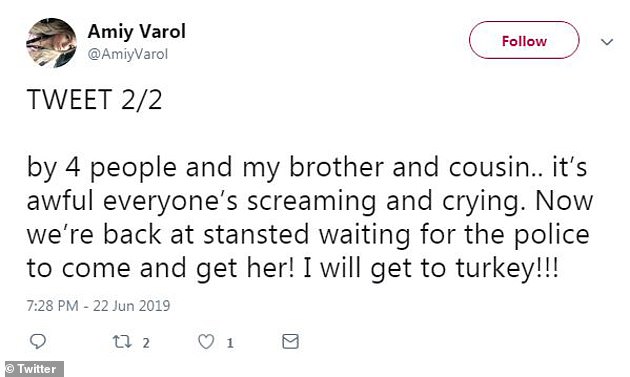 Passengers on board the aircraft said the woman tried to run to the front of the aircraft and storm the cockpit.

Jet 2 said in a statement: ‘We are now liaising with the relevant authorities to support their investigation, and we will not hesitate to prosecute.

‘For years we have been highlighting just how serious the consequences of disruptive passenger behaviour can be.

‘These consequences include huge fines, lifetime bans and court action.

‘They now also include the authorities having to scramble fighter jets to escort commercial aircraft, proof that this behaviour must stop now.’

Fellow passengers and crew were forced to pin down the woman who was arrested after the jet landed at Stansted.

Police across Essex received numerous 999 calls reporting an explosion, but the noise was believed to be the two RAF fast jets breaking the sound barrier as they raced to intercept the passenger aircraft.

The incident caused delays of up to half an hour at Stansted Airport with several aircraft forced to hold until the all-clear was given.

The Jet 2 flight between Stansted to Dalaman in Turkey left the Essex airport shortly after 4.50pm.

It was forced to turn around shortly before it reached the Dutch coast, at 5.15pm.

The jet was then intercepted by the pair of RAF jets and escorted back to Stansted where it landed at 5.49pm.

A 25-year-old woman was arrested on suspicion of two assaults and endangering an aircraft.

It is understood she tried to open the door of the aircraft while in mid air.

Former security guard Steven Brown, 58, who was on the flight, has told how he held the woman down and spoke of her extreme strength.

Mr Brown, from Romford, told the Sun: ‘She bolted to the front of the plane and threw one stewardess from one side of the aisle to the other. Another was clinging onto her but lost her grip and the woman ran towards the door.

‘She was punching, kicking and screaming at the stewards, they were trying to stop her but they had no chance.

‘She was only petite but she had the strength of a fully-grown man. The only time I’ve seen anything like that was when someone had just dropped acid, she had super strength.’

One witness told The Mirror: ‘I was on the flight to Dalaman from Stansted and, after 45 minutes of being in the air, this lady gets called to the front of the plane and she starts shouting and screaming and runs to the airplane door.

‘Passengers said they were terrified by the woman’s actions on board the aircraft. 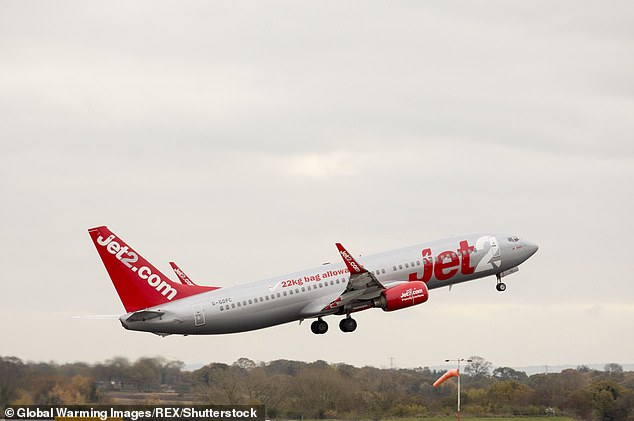 An ‘extremely disruptive passenger’ forced a Jet 2 aircraft to return to Stansted with an RAF escort today. The passenger tried to open a door of the Airbus jet as it was flying over the North Sea

The RAF Typhoon, pictured here during an interception over the Baltic launched from RAF Coningsby as a Quick Response Alert. The two fighters escorted the Jet 2 aircraft to Stansted 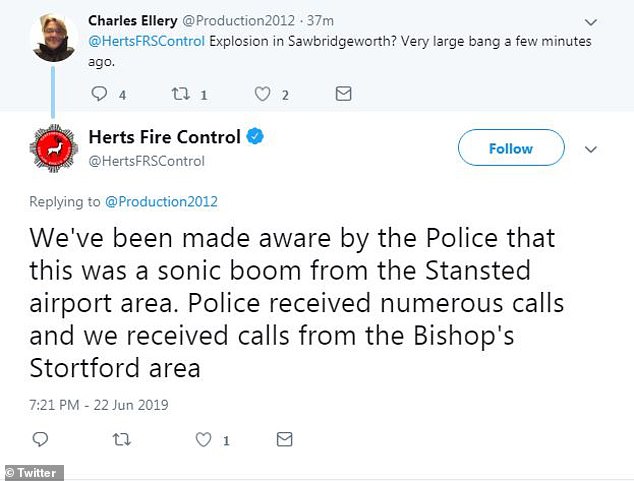 ‘Cabin crew grabbed her to stop she starts scratching them hitting them, she then got pinned to the floor by cabin crew and passengers, a passenger even sat on her.

‘She kept getting up and running back towards the door, she had six people sitting her we had to fly back to Stansted for the police to get her.’

Passenger Amiy Varol said she was two rows behind the woman. She wrote on Twitter: ‘So I get on a plane to Turkey after being in the air for 45 mins some drunk lady (may be on drugs too) attacks the cabin crew and then tried to open the airplane door!!

‘6 people are holding her down, she’s screaming biting people and now she’s in a seat being held down by 4 people and my brother and cousin.. it’s awful everyone’s screaming and crying. Now we’re back at stansted waiting for the police to come and get her! I will get to turkey!!!’

Ms Varol told The Sun: ‘She kept getting up and running back towards the door, she had six people sitting her we had to fly back to Stansted for the police to get her.

‘I was terrified there’s nothing you can do, you can’t escape.’

People as far as 20 miles from Stansted Airport heard the sonic boom caused by the RAF Typhoons. 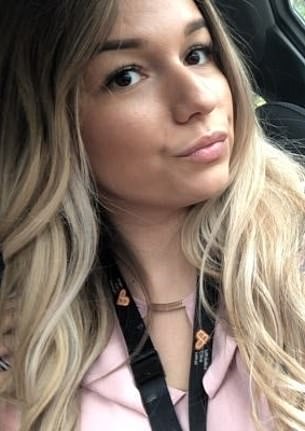 Passenger Amiy Varol, pictured, was on board the flight. She said a drunk lady tried to open the aircraft’s door about 45 minutes into the journey. She said six people had to hold her down. ‘

It is understood the jets refueled mid-air before returning to RAF Coningsby.

Stansted airport confirmed the alert was caused by an unruly passenger on board a Jet 2 aircraft which had just took off en-route to Dalaman, Turkey.

The RAF jets intercepted the airline and escorted it back to Stansted where the passenger was arrested.

One man described the noise as a ‘huge bang’ which ‘nearly blew my window out’.

Several people on Twitter commented about the noise created by the two RAF fighter jets.

Zachary Bastiani wrote: ‘I heard a really large bang around 6:30/6:45 at Epping Station which now has been identified as a sonic boom which came from a plane near Stansted airport I’m surprised that an aircraft 18 miles away from Epping can give so much noise.’

Bishop’s Stortford police tweeted: ‘Large number of 999 calls coming in about a loud explosion. We have liaised with @EssexPoliceUK who are confirming that this is a sonic boom from a passing aircraft.’

A Jet 2 spokesperson said: ‘We are aware of an incident regarding an extremely disruptive passenger on a flight from Stansted to Dalaman earlier this evening.

‘The aircraft has returned safely and we are liaising with the relevant authorities to support their investigation. We are working hard to ensure the remaining customers reach their destination as soon possible.’

Essex police said: ‘We were made aware of a disruptive passenger on an inbound flight to Stansted this evening, Saturday, June 22.

‘There is a possibility that residents nearby may have heard a loud noise, often associated with a sonic boom, as the aircraft descended into Stansted airspace.

‘Officers attended and arrested a 25-year-old woman on suspicion of two assaults and endangering an aircraft.

‘She remains in custody.’

A Royal Air Force spokesperson said: ‘We can confirm that RAF quick reaction alert Typhoon aircraft from RAF Coningsby scrambled to escort a commercial flight into Standard shortly after take-off due to reports of a disruptive passenger.’

Sarah Kirby, who lives near the airport wrote on Twitter: ‘Relieved to hear it was a sonic boom and nothing serious! We live very close to Stansted Airport and it was the most surreal thing I’ve witnessed.

‘Literally sounded like a plane crash or explosion. Birds all flying away from direction of airport. House shook!’