A member of a drug gang called a ‘jolly big man’ in court was jailed for nearly 20 years after he was arrested with £2.4million of cocaine hidden inside empty shoe boxes.

Sean O’Neill, of Hattersley, Greater Manchester, was part of a ‘Breaking Bad’ style plot that involved a Hungarian chemist to produce and distribute £3million worth of Crystal Meth.

Former doorman O’Neill was picked up by police on the M6 after they enforced a ‘rolling road block’ to stop his black Citroen van that was laden with 30kg of high purity cocaine stashed inside the boxes.

O’Neill and his wife Jennifer O’Neill – who had five children together – were jailed for their part in the plot, alongside Gary O’Regan, 34, Paul Higginson, 40, Patrick Warde, 52, and Darren Gill, 27. 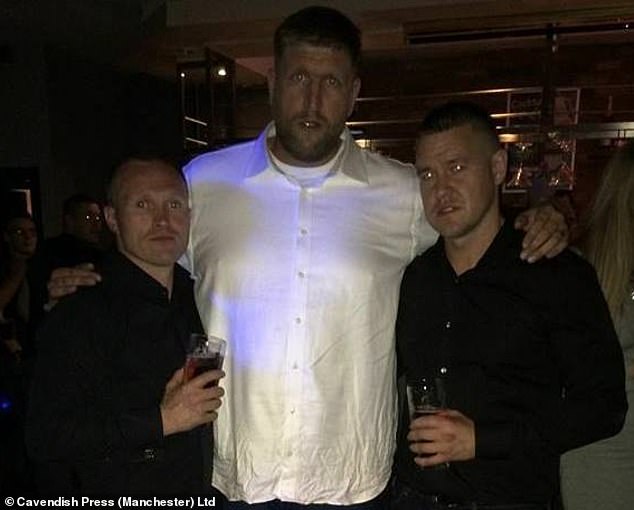 Left to right: Paul Higginson, Sam O’Neill and Gary O’Regan who were all jailed for their part in the drugs plot

O’Neill and his 13 year marriage to his wife is now over, Manchester Crown Court heard.

The court was told group travelled across the UK collecting cocaine and heroin, from destinations in Lncashire, Merseyside, West Yorkshire, parts of the North east, and Chipping Norton in Oxfordshire.

O’Reagan, who police said was the gang ringleader, enlisted the help of a Hungarian pharmacist, a convicted gangland assassin and an industrial chemicals expert to install a secret narcotics factory just like that which featured in the hit TV drama Breaking Bad.

O’Regan who had only just been freed from jail for narcotics trafficking, flew in the chemist from Germany, put him up in a hotel and even took him to watch Manchester United in a Premier League match whilst getting his expertise in building the lab and ‘cooking’ the drugs.

One of his gang’s fixers was a former hitman who had also been freed from prison after serving 13 years of a life sentence for helping shoot dead a man with an Uzi submachine gun. 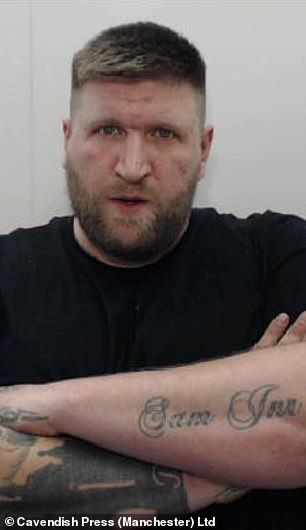 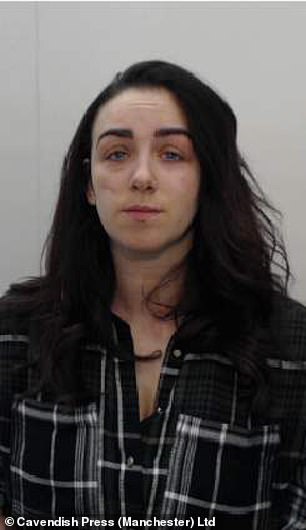 O’Regan, from Salford, Greater Manchester, was arrested in February last year when armed police stopped his VW Passat as he was driving along the M62 to Liverpool. Officers found a Turkish made Flobert Zoraki ‘Streamer’ revolver and eight rounds of ammunition under the driver’s seat.

At Manchester Crown Court, O’Regan pleaded guilty to conspiracy to produce amphetamine and possession of a firearm. He was convicted of conspiracy to supply cocaine following a trial.

Convicted killer Paul Higginson, 40, of Kirkby, Liverpool was found guilty of conspiracy and was jailed for 21 years.

O’Neill, 35, of Hattersley near Hyde pleaded guilty to conspiracy to supply cocaine and heroin, conspiracy to produce amphetamine, and possession of a firearm and ammunition and was jailed for 19 years and six months. His wife Jennifer, 31 was found guilty of conspiracy and jailed for four years.

Patrick Warde, 52, of Heywood was found guilty of conspiracy and jailed for 21 years whilst Darren Gill, 27, of Chorley pleaded guilty to drugs offences and was jailed for nine years.

The racket began after O’Regan was freed from jail in November 2017 after being convicted of trafficking cocaine and producing cannabis.

After his release he temporarily set up base in Spain whilst members of his gang made various trips around the UK including Sunderland, Middlesbrough, Kettering, Wales and Slough, Berks, where it is believed they transported cocaine and heroin to potential buyers.

The chemist named in court as Laszlo Viszocsanszki was collected by O’Regan from Manchester Airport in February last year and in the same month was taken to watch United play Newcastle at St James Park and given a mobile phone. 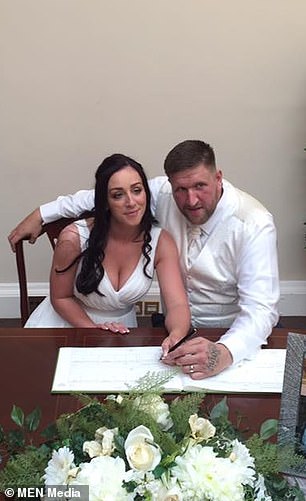 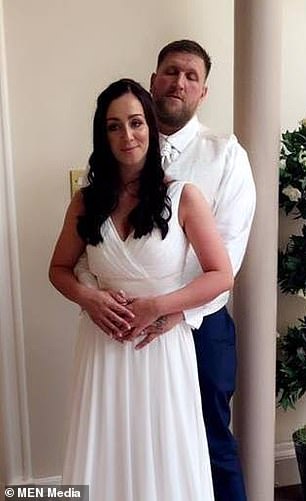 O’Neill and his wife on their wedding day. Manchester Crown Court heard thier 13 year marriage is now over

O’Regan also made contact with a chemicals supplier to pick up £3,000 worth of lab equipment but during a journey to the proposed site in the Midlands, the chemist refused to travel in same car as the various chemicals.

O’Regan was arrested after a police surveillance team saw him accept a bag from one of his accomplices during a rendezvous in Trafford Park. The bag was found to contain the gun and bullets and he also had various mobile phones and a sophisticated encrypted mobile device.

Higginson replaced him as head of the gang but police arrested one of his accomplices in April last year he was driving a Citroen Berlingo Northbound along the M6 from Slough. They recovered 30kg of high purity cocaine from the back of the vehicle.

During a series raids officers searched a café and bar in Hyde and recovered 2.5kg of cocaine, 0.5kg of heroin and almost 1kg of MDMA, along with other drug paraphernalia such as scales, vacuum packing equipment and empty kilogram bags. There were also a number of empty shoe boxes which the gang planned to store the drugs in.

When Higginson was arrested he had just over £14,000 in cash and a large amount of designer clothing. Officers searched a storage unit and a discovered large amount of chemicals and laboratory equipment – capable of producing 115 kilos of amphetamine sulphate worth up £3,500 a kilo. A search of a farm yielded glassware and heating stoves which would have helped with production process.

Sentencing Judge Patrick Field QC said: ‘These are serious offences and this operation was meticulously planned and sophisticated. The effect of drugs not only upon those taken by users, but on those many others, as you will know from your own personal experiences, and also on the community at large.. It can cause misery and harm.’

‘If the plan had gone ahead, you would have started to manufacture 115kilos of amphetamine. This was a sophisticated operation.’

After the case Det Insp Lee Griffin, of GMP’s Serious and Organised Crime Group, said: ‘During this operation we monitored the group closely as they conducted their illicit activities across the country, enabling us to gather evidence through surveillance and unravel the conspiracy.

‘It is thanks to the hard work of all the officers in this case that a group of career criminals have been stopped from deluging our streets with such a huge amount of drugs. We have also managed to disrupt an even larger quantity of drugs from being produced and ultimately being distributed nationwide.

‘Drugs wreck lives, destroy relationships and blight our communities. Those who are responsible for supplying illegal drugs to vulnerable people deserve no place in our society, and our community is a safer place with them behind bars.

‘I hope this sentencing sends a clear message that we will relentlessly pursue those persons who supply harmful drugs and we will go to great lengths to bring them to justice.’