A judge admitted he was putting members of the community at risk by giving a prolific offender with 191 convictions one last chance.

Heroin user Joseph Dunn, from Cramlington in Northumberland, has repeatedly found himself in front of a court for crimes burglaries, robbery and theft.

The 46-year-old had been released on licence from an 876-day sentence for burglary in January, but after a short time on the straight and narrow, he relapsed back into drug use and went back to his old ways. 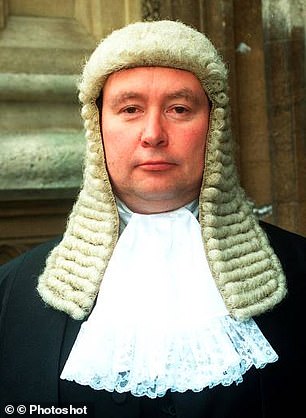 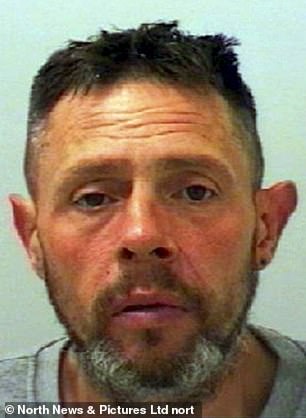 Heroin user Joseph Dunn, from Cramlington in Northumberland, (right) has repeatedly found himself in front of a court for crimes burglaries, robbery and theft. Pictured on the left is Recorder Alistair MacDonald QC

He stole from a beauty salon, was caught rummaging around an office of a city centre hotel and was then found in a stolen car with no licence or insurance.

Dunn has now admitted a further six offences but was given a final chance to prove he can go straight.

Sentencing him to a community order at Newcastle Crown Court, Recorder Alistair MacDonald QC, who said Dunn has a ‘shocking record of previous convictions’, added: ‘I know I’m taking a risk.

‘There are people out there I’m putting at risk by putting my trust in you but I’m just about persuaded rather than locking you up again and the community having to pay for you to be in prison at massive expense, I can just about say this is a final chance for you to get out of this cycle of behaviour and pay your own way in society and be a proper citizen.’

The judge said he was letting Dunn out of prison, where he has been on remand, ‘with some trepidation’.

He added: ‘The easiest way to deal with you is by locking you up and saying there’s nothing more anyone can do with you.

‘You have let the courts down on numerous occasions when given non-custodial sentences in the past.

‘But I’m impressed by the fact that for the first time in years, you did have work, you had money in your pocket and you didn’t offend during that period, so you can remain out of trouble if you have work.’

However, Recorder MacDonald warned him: ‘I’m playing straight with you and playing fair with you and giving you a chance.

‘If you let me down the court will look at this and it’s effectively a suspended sentence hanging over your head.

‘This really is your last chance to get out of the cycle of criminality. Please don’t let me down.’

After being released from his last prison sentence in January, Dunn got a job working in construction at a hospital and appeared to be doing well.

But by May he had started taking drugs and offending again.

On May 22, he went to Holistic Health and Beauty, near his then-home in Cramlington, telling staff he was interested in buying a treatment for his daughter for her prom.

He was given a price list, left, but then returned while staff were busy with customers and stole a cash box containing £35.

The shop owner said: ‘We are a small business and I can’t afford to lose cash of that quantity.

‘I feel my personal space has been invaded and I feel vulnerable, having been the victim of a burglary previously.’ 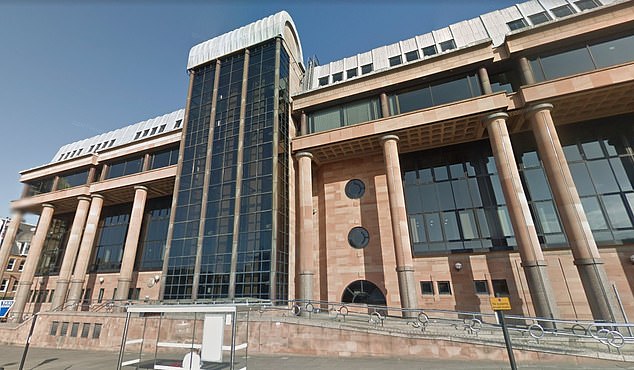 Sentencing him to a community order at Newcastle Crown Court, (pictured) Recorder Alistair MacDonald QC, who said Dunn has a ‘shocking record of previous convictions’, added: ‘I know I’m taking a risk’

Dunn was arrested but bailed and went on to commit another offence at the Royal Station Hotel, in Newcastle, on July 7.

The general manager found him in the sales office, in a restricted area, rummaging through filing cabinets, Dunn giving the ‘feeble’ explanation that he was just looking for a pen.

He was arrested for that and bailed again and went on to commit further offences.

On August 10 a Ford Mondeo was stolen from a man in Cramlington and three days later Dunn was caught driving it, appearing impaired through drink or drugs and without a licence or insurance.

He pleaded guilty to theft from the beauty salon, attempted burglary at the hotel, handling the stolen car, failing to provide a sample for analysis, and having no insurance or licence.

Outlining his long list of previous convictions, prosecutor Jane Foley said: ‘He is a prolific offender, he has an extensive record covering a vast range of offending.’

Tony Cornberg, defending, said: ‘He was released in January and spent time working in a hospital in construction work but he relapsed back into heroin use.

‘For all his faults he does have a work ethic.’

Addressing the judge himself, Dunn said he didn’t offend for the money but needed help with making ‘spur of the moment decisions’ and said ‘I just keep making the same mistake over and over’.

Dunn, of no fixed address, was given a community order for 18 months with a 28-month driving ban.

Doctors use keyhole surgery to repair spine of spina bifida baby in UK first
Kylie Jenner throwback reveal she HAS previously eaten cereal with milk
Line Of Duty: EastEnders' Michelle Fowler star Susan Tully is a DIRECTOR on the show
24 hours to save Brexit as Boris urges MPs to defeat May's deal
Coco Gauff left 'screaming' after Beyonce's mum posted about her Wimbledon fairytale on Instagram
British mother, 55, faces jail in Dubai after branding her ex-husband an 'idiot'
Multi-millionaire couple who lost court battle with architect friend must pay out up to £2m in costs
Hilarious memes on day one of Boris Johnson's coronavirus lockdown